Most voters oppose separating children from their families, regardless of how the policy is described to them

President Donald Trump greets supporters as he arrives for a campaign rally at the Amsoil Arena on June 20, 2018 in Duluth Minnesota. (Photo by Scott Olson/Getty Images)
By Eli Yokley

Despite days of scrutiny over the administration’s policy of separating families when adults are detained for illegally crossing the U.S.-Mexico border, President Donald Trump’s approval has not experienced a significant change.

Forty-four percent of survey respondents approve of Trump, while 51 percent disapprove of him in the latest Morning Consult/Politico poll, conducted June 19-21 among a national sample of 1,994 registered voters, amid the media firestorm over the policy of separating migrant children from the people who brought them to the United States.

The numbers were little changed  from a June 14-18 poll, conducted before the uproar over the policy went into full swing. At the time, 43 percent of voters approved of Trump and 51 percent disapproved. Both polls have a margin of error of plus or minus 2 percentage points.

Related: More Voters Oppose Trump’s Asylum Policy Than Support It — But Not by Much

According to Morning Consult/Politico polling, Trump’s approval and disapproval ratings have hovered in the same 2 point range since late April.

“One thing we’re learning about this presidency is it is unlikely to produce wild swings in his polling average,” said Scott Jennings, deputy political director under former President George W. Bush and now a Kentucky-based Republican strategist.

While there may be shifts over time, Jennings said in a Thursday interview, “A news story doesn’t change things 10 points overnight.”

Karlyn Bowman, a senior fellow at the American Enterprise Institute who studies public opinion and U.S. politics, said voters’ views on Trump are relatively stable, and the week’s news about the immigration policy “could take some time to sink in.”

“It could be early,” she said in an interview, noting how quickly the administration changed its policy and the ensuing confusion over how it will proceed with ending the family separations.

Trump signed an executive order Wednesday in an attempt to end the practice of children being separated from their families, proposing to detain families together rather than apart. But the move that could run into legal trouble because of a ruling prohibiting the federal government from keeping children in immigration centers for more than 20 days. On Thursday, the Department of Justice asked a judge to change the rules, seeking permission to detain them for a longer period of time.

The latest poll was in the field before and after Trump announced his decision to end the family separations that came as a result of his administration’s “zero tolerance” immigration policy, which promises to prosecute all who come into the United States illegally.

The survey found most voters opposed separating children from their families, regardless of how the policy was described to them. 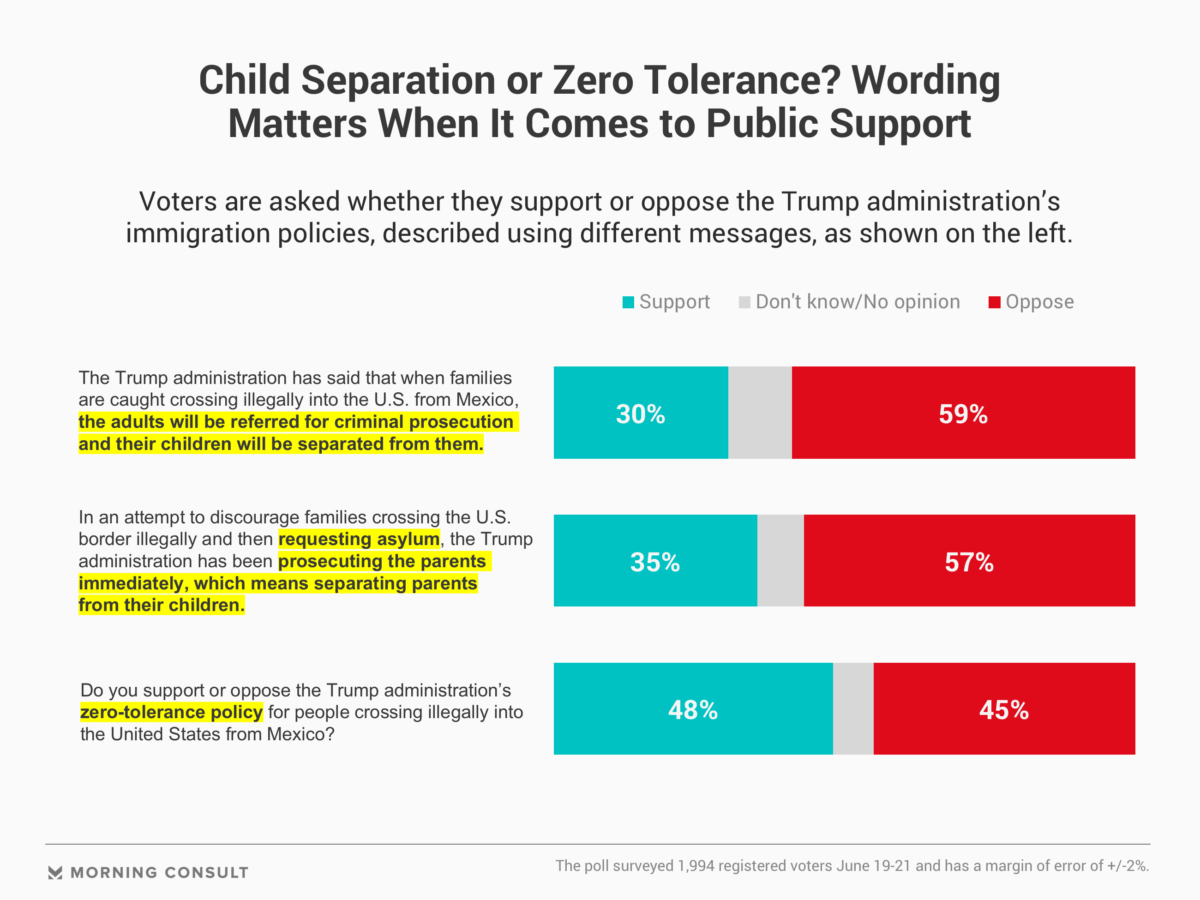 When asked about children being separated from the “people” with whom they came to the United States, 57 percent opposed the policy, while 34 percent supported it. When the word “families” was used instead of people, support fell 4 points, to 30 percent.

But support rose if voters were asked more broadly about Trump’s zero-tolerance immigration policy — without mentioning the child separation. In that case, a plurality of 48 percent supported the policy while 45 percent opposed it.