To Draw in Millennials, Theme Parks Rely on Nostalgia and Tech

“Toy Story” premiered in 1995, yet Woody, Buzz Lightyear and the rest of the Toy Story gang are the stars of Walt Disney Co.’s latest park expansion.

Toy Story Land, which opens Saturday in Disney’s Hollywood Studios, is the theme park industry’s newest attempt to tap into the nostalgia of millennials, many of whom are all grown up with families of their own, experts said.

Disney and others are banking that millennials will open up their wallets not only to create memories for their children but also to reminisce and interact with characters of their own childhood in new ways, beyond just the screen. They’re also appeasing millennials’ smartphone addiction by adding social media and other high-tech elements to parks.

And a new national survey shows that marketing pitch appears to be working: Both millennial parents and millennials without children are more likely than the public overall to visit parks, be willing to fork over hundreds of dollars to get in, and appreciate the commercialized nostalgia that many parks are focusing on.

Analysts say this is due in part to millennials’ familiarity with theme parks as a go-to vacation spot: Unlike their baby boomer parents, millennials grew up going to theme parks and still view them as an attractive vacation destination, with or without kids. 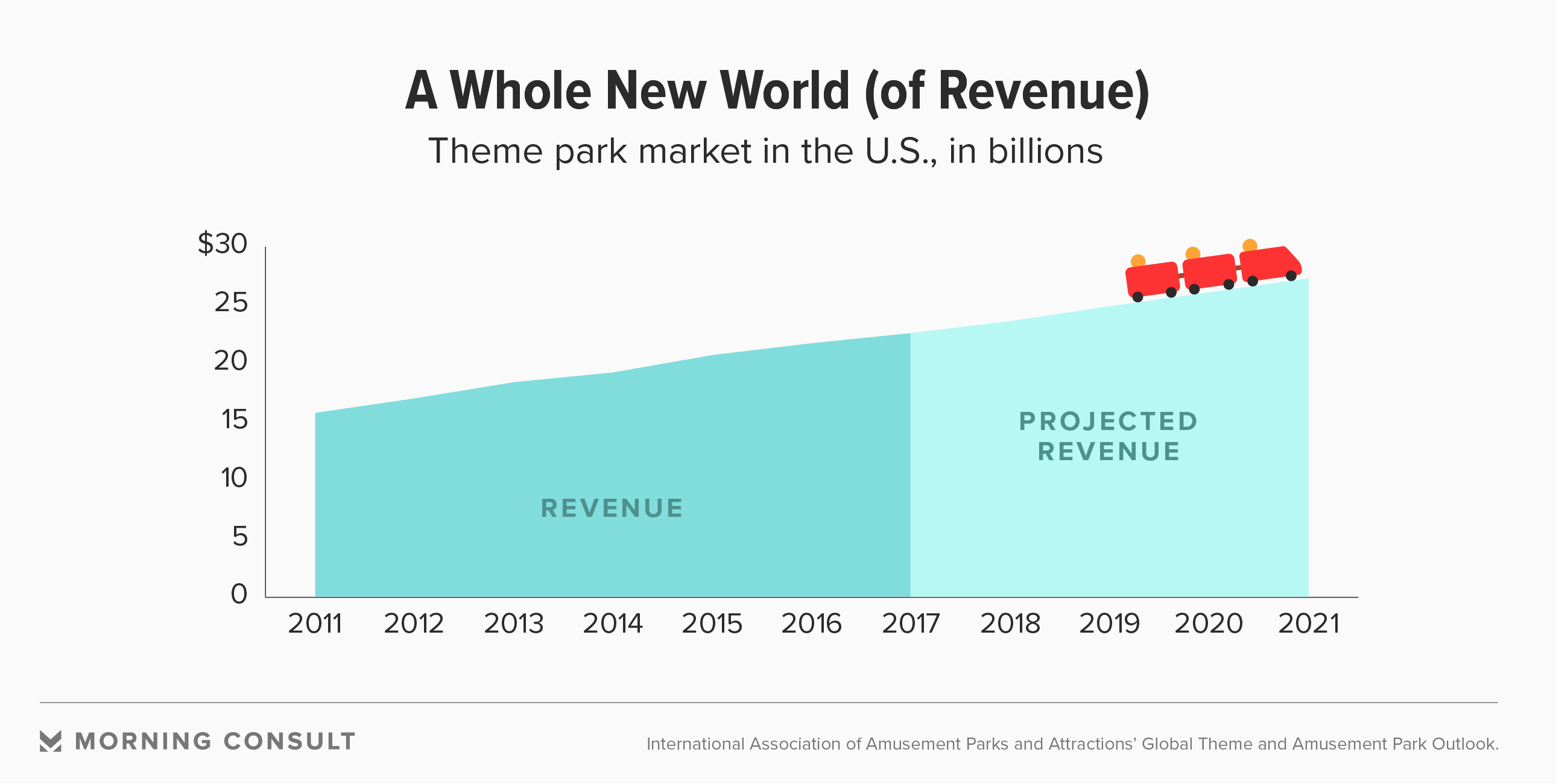 The theme park market in the United States is outpacing the growth of the economy and should total about $27.2 billion in 2021, up from an estimated $22.6 billion in 2017, according to the latest figures from the International Association of Amusement Parks and Attractions’ Global Theme and Amusement Park Outlook.

Theme parks’ attendance in the United States totaled 390 million visits last year, up from 343 million in 2011, the earliest year data are available in the report. (The numbers count attendance at each park separately.)

Disney properties make up six of the top seven most visited theme parks in North America, with a total attendance of about 84 million people last year, according to the Theme Index and Museum Index from the Themed Entertainment Association and the economics practice of the engineering firm AECOM.

Walt Disney World opened in 1971, but theme parks were not necessarily a common vacation destination in their early years, Hill said. Visitors often dressed in their Sunday best, a far cry from the T-shirts and fanny packs of today.

Disney did not respond to a request for comment on its theme park strategy and how it is appealing to the millennial demographic.

Experts said it’s millennials, many of whom grew up going to theme parks and are now becoming parents, who are driving much of the growth in the industry.

Younger adults — or those ages 20-39, a slightly larger age range than that of millennials — are more likely to have children under age 18 than adults age 40 and older, according to U.S. Census Bureau’s 2017 Current Population Survey. That younger segment constitutes half of the parents of minor children.

Millennial parents were more likely than other parents to say they’re interested in going to a theme park in the next year: 78 percent versus 59 percent, according to the Morning Consult survey of 2,201 U.S. adults from June 14-18.

But childless millennials aren’t missing out on the fun. 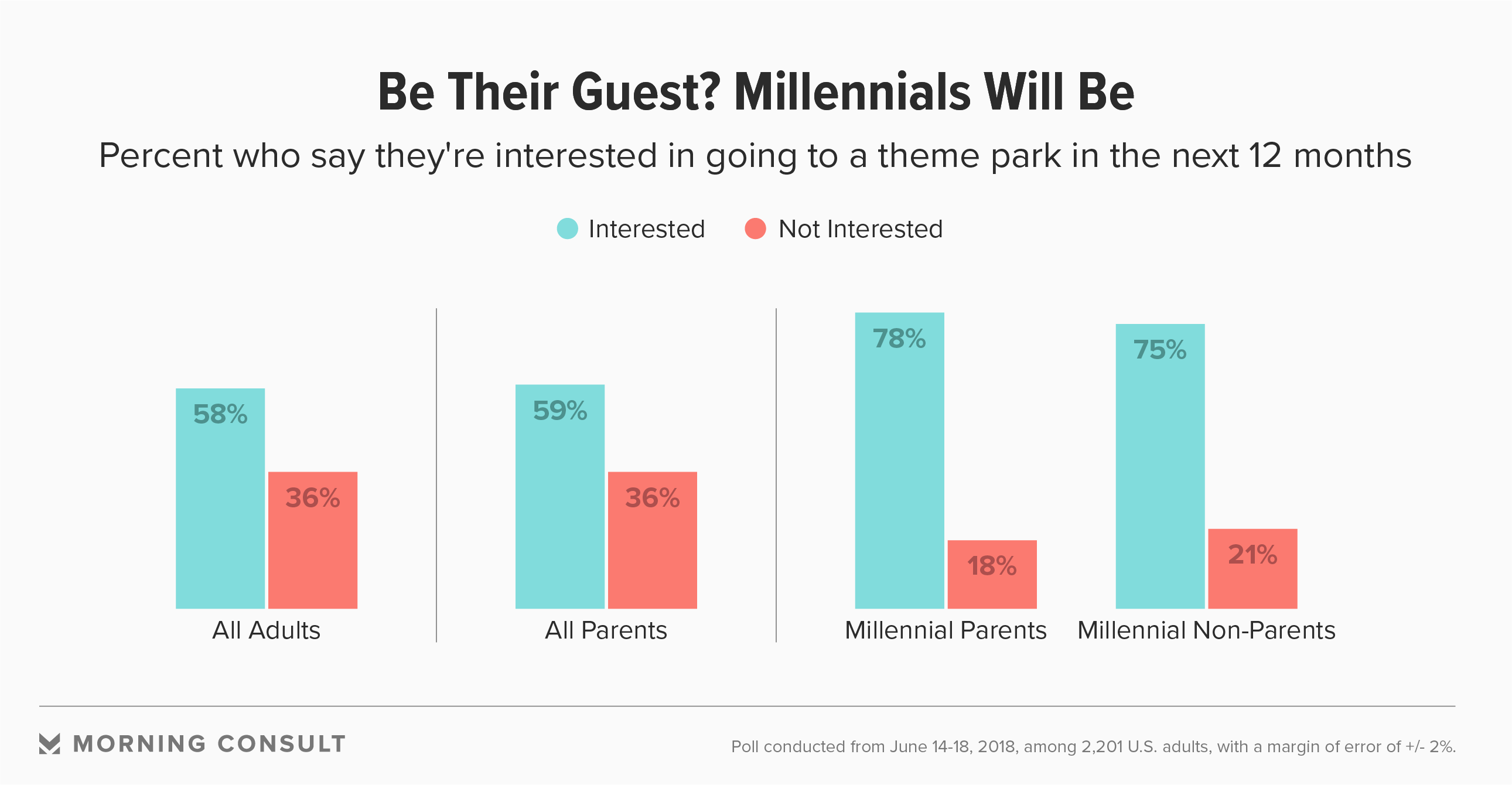 Millennials without children are about equally as likely to say they’ll go as millennials with kids (75 percent versus 78 percent), according to the survey, which has a margin of error of 2 percentage points.

Allure for a childless demographic is a shift for parks, and it’s something theme parks are taking advantage of, experts said.

Millennials are not alone in their love for nostalgic park themes.

Pluralities of all parents, millennials included, said they would prefer to attend theme parks that feature characters and worlds from movies, television shows or cartoons of their childhood over parks that host their children’s favorite characters or themes.

Five of the nine coming attractions due to open in Walt Disney World this year have nods back to past worlds, including Star Wars: Galaxy’s Edge, which features a life-size Millennium Falcon ship and a Star Wars-themed hotel that’s connected to the park.

Star Wars first came out in 1977, and its appeal extends beyond millennials: Nielsen found that Star Wars fans are 17 percent more likely to be Gen Xers, which they define as ages 35-44.

Len Testa, the owner of the theme park planning website TouringPlans.com and co-author of several theme park guidebooks, said Disney was using “Star Wars” to compete with Universal Orlando Resort Inc.’s “Wizarding World of Harry Potter,” which focuses on the popular fantasy book that first came out in 1997. Millennials were 1 to 16 years old then, meaning the subsequent books in the series came during their peak childhood reading years.

The Harry Potter park fundamentally changed the game of marketing to millennials because its theme directly targeted an older demographic and did not necessarily cater to their children, Hill said.

The park opened in 2010, with an expansion in 2014. Comcast Corp., which owns NBCUniversal Media LLC, saw yearly revenue in its theme park division grow 17 percent after the expansion, versus 7 percent growth the prior year.

Millennial parents are also more likely to say that the price of admission is worth it, according to the Morning Consult survey.

A one-day Saturday pass to Magic Kingdom, one of Disney’s four theme parks near Orlando, Fla., for a person over age 10 costs $119, while a one-day pass to Universal Orlando costs $115.

Beyond pure sentimentality, theme parks are adding other elements to appeal to millennials, such as more technology.

“The thing that Disney is most interested in is how to interact with millennials that are on their devices all the time,” Testa said.

That includes featuring one “Instagrammable” element in every Disney hotel room and throughout the areas where visitors queue for rides. The company is also developing a Play Disney Parks app that, among other things, allows users to cut in line if they play and win the game long enough.

“Millennials hate to stand in line,” Hill said. “Disney World is nothing but line.”

But right on the heels of Toy Story Land is another park brimming with nostalgia: Universal Studios is planning theme parks around Nintendo Co.’s video game universe at three of its locations.

NBCUniversal did not respond to a request for comment on their marketing to millennials.

“That entire park was created keeping in mind the aesthetic of the millennial,” he said of the generation that grew up with Mario Bros., Donkey Kong and Zelda in the 1980s.

That’s one idea that terrifies Disney, he said.