Kennedy, set to retire at the end of the month, has supported Roe v. Wade

The U.S. Supreme Court is shown on Dec. 4, 2017 in Washington, DC. (Photo by Win McNamee/Getty Images)
By Cameron Easley

With questions about precedent and Roe v. Wade set to feature heavily in the debate around the upcoming confirmation process for Supreme Court Justice Anthony Kennedy’s successor, a new Morning Consult/Politico poll finds most voters want his replacement to support abortion rights.

Twenty-nine percent of voters, including 54 percent of Republicans, said they hope the next justice would oppose abortion rights, while 31 percent of GOP voters said the opposite. The survey of 1,990 registered voters carries a margin of error of plus or minus 2 percentage points. 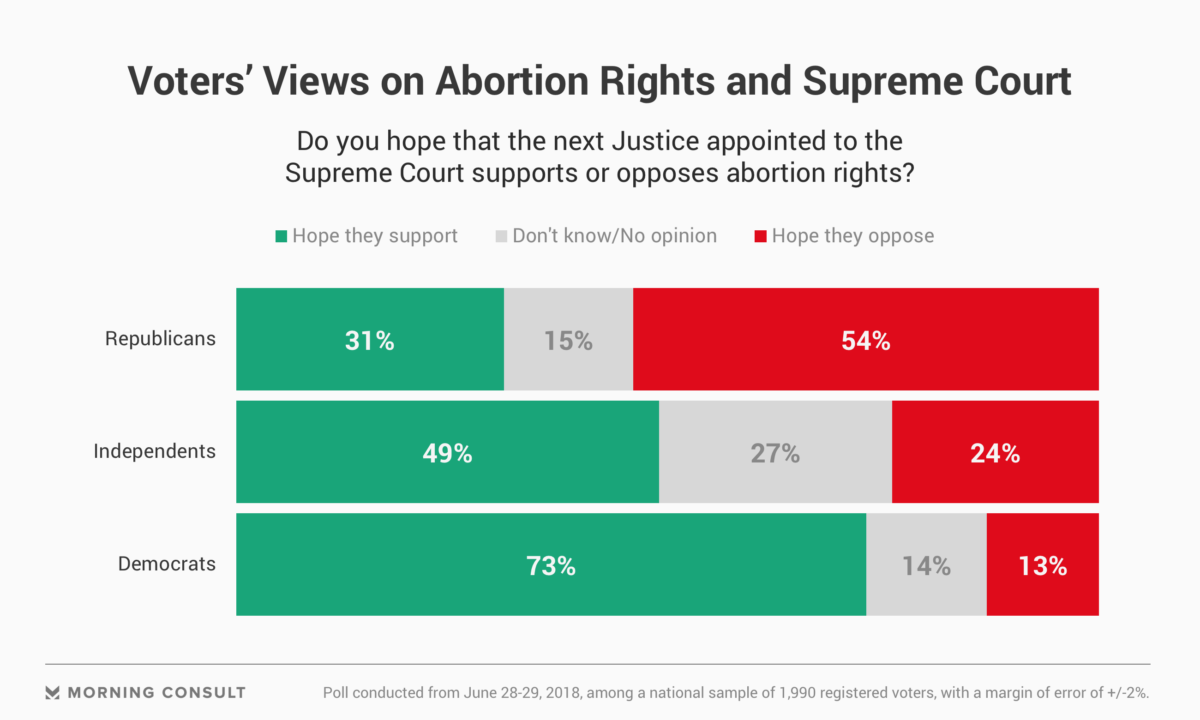 While Kennedy has not been a full-throated supporter of abortion rights, he voted in 1992 to affirm Roe v. Wade, the 1973 landmark decision that secured the constitutional right to have an abortion.

After Senate Republicans changed the rules last year, Supreme Court nominees now require a simple majority in the Senate for confirmation, rather than the original 60-vote threshold. The GOP holds a one-seat edge over their Democratic counterparts, 51-49, and with Sen. John McCain (R-Ariz.) in Arizona undergoing treatment for brain cancer, Senate Majority Leader Mitch McConnell (R-Ky.) has little room for error on the vote.

Sen. Susan Collins, a Republican moderate from Maine and a key vote in the chamber, said Sunday on ABC’s “This Week” that a “candidate for this important position who would overturn Roe v. Wade would not be acceptable to me, because that would indicate an activist agenda that I don’t want to see a judge have.”

When asked directly about Roe v. Wade, most voters agreed: Fifty-six percent of respondents in a February 2017 Morning Consult/Politico survey said the Supreme Court should not overturn the landmark case.

While the new poll shows most voters prefer a judge who supports abortion rights, it also indicates they think senators should be more concerned about a candidate’s legal chops than his or her policy positions.

Sixty-one percent of voters said senators should base their vote primarily on whether a Supreme Court nominee is qualified to serve, while 24 percent said what matters is where the candidate stands on political and social issues that might come before the court.