Wheeler, a former coal lobbyist, takes over as acting administrator on Monday 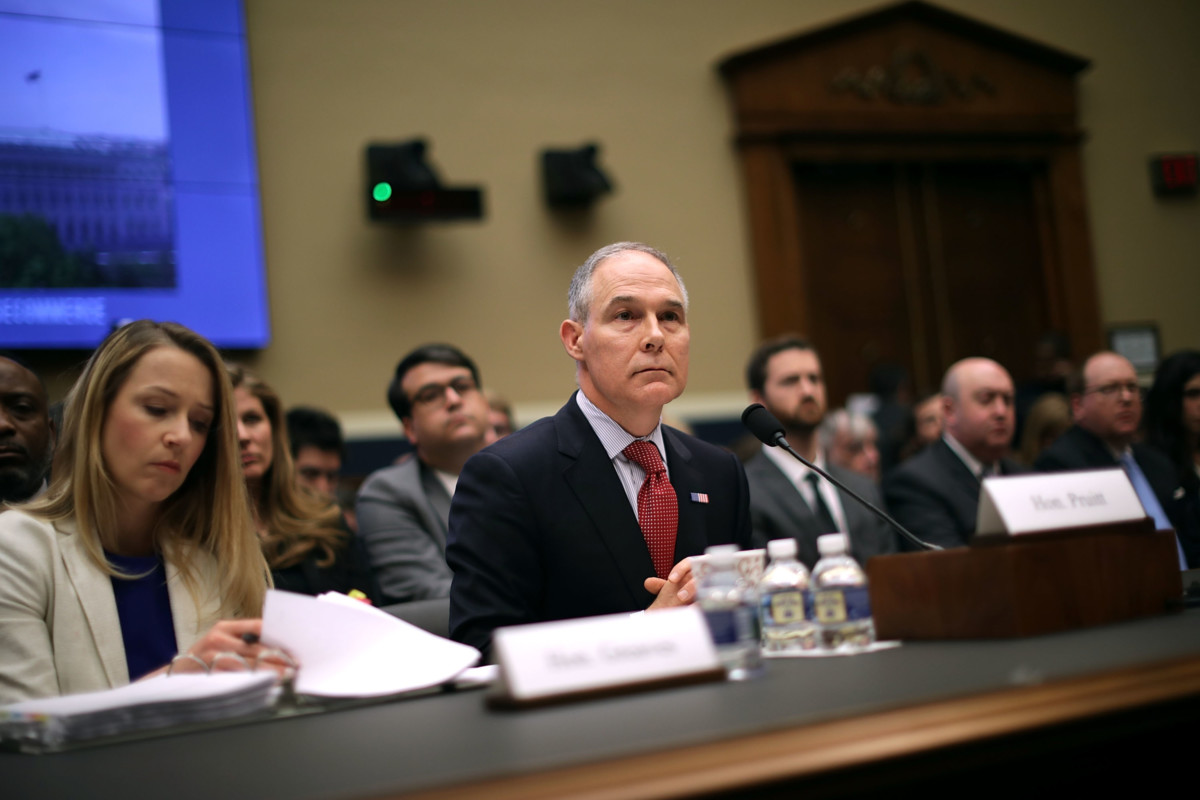 Environmental Protection Agency Administrator Scott Pruitt testifies before the House Energy and Commerce Committee's Environment Subcommittee in Washington, where he fielded questions from lawmakers about his expenses and conduct. (Photo by Chip Somodevilla/Getty Images)
By Jacqueline Toth

Scott Pruitt’s resignation as head of the Environmental Protection Agency is unlikely to change the agency’s overall push in cutting back on environmental regulations, analysts said.

President Donald Trump announced Pruitt’s resignation on Twitter on Thursday and said his deputy, Andrew Wheeler, will take over as acting administrator as of Monday.

The resignation came after months of ethical and spending controversies took an increasing toll on Pruitt’s image and put the administration’s press team on the defensive.

“Within the Agency Scott has done an outstanding job, and I will always be thankful to him for this,” Trump tweeted Thursday afternoon. “I have no doubt that Andy will continue on with our great and lasting EPA agenda.”

Environmental groups are not likely to see a sudden shift in the EPA’s agenda even with Pruitt’s departure. Andrew Wheeler, a former coal lobbyist, is expected to carry forward Pruitt’s deregulatory push for the moment, though it is still unclear whether Trump will nominate him as EPA administrator.

Looking at the larger regulatory reform initiatives at the EPA, he said: “I think Andy’s fully on board.”

Beyond Wheeler, the EPA will still retain many top agency officials the Senate confirmed or the agency hired — several of whom came from or represented the industries they now regulate. Nancy Beck, deputy assistant administrator of the EPA office that handles pesticide and chemical issues, for example, was a senior director at the chemical lobbying group American Chemistry Council prior to joining the administration. And air chief Bill Wehrum, now on his second turn at the agency, was most recently a partner with Hunton and Williams LLP, which in April became Hunton Andrews Kurth LLP after a merger, lobbying the administration on air issues on behalf of oil and gas interests.

In recent months, Pruitt came under an increasing number of internal and congressional investigations into potential ethical missteps, including allegations of misused taxpayer money on travel and security.

But internal EPA memos obtained by Senate Democrats suggested the specific threats identified were less credible than the agency maintained. One memo described by Democrats indicated the EPA Office of Homeland Security determined no specific or credible threats were made against the administrator. The agency later parted ways with the employee who signed off on the memo, according to media reports.

Under Pruitt’s administration of the EPA, the agency spent over $43,000 to have a private phone booth installed in Pruitt’s personal office. And last June, he spent more than $120,000 of public money for himself, staff and security to travel on a work trip to Italy, in some cases taking premium-class flights, according to agency records obtained under a Freedom of Information Act lawsuit brought by the Environmental Integrity Project, a watchdog group.

A Morning Consult/Politico poll of 1,991 registered voters from April 26 to May 1 found 53 percent believed Pruitt should be removed as head of the EPA based on his ethical lapses, while 12 percent disagreed. Among Republicans, 38 percent thought Pruitt should be removed, while 40 percent of Republicans, a plurality, weren’t sure or had no opinion.

Trump had long stood behind Pruitt, a former Oklahoma attorney general who perhaps more than any other agency head has implemented deregulatory actions to change or scrap Obama-era rulemakings, with the goal of increasing U.S. energy production and supporting businesses.

As directed by Trump, Pruitt started processes at the EPA to roll back big-ticket regulations like the Waters of the United States rule and the Clean Power Plan. The agency is now moving to more narrowly define WOTUS under the Clean Water Act, limiting the federal government’s jurisdiction over American waters for permitting purposes, and to replace the Clean Power Plan, which was to require existing fossil fuel-fired power plants to curb their carbon dioxide emissions by 32 percent under 2005 levels by 2030.

Pruitt also moved to revise, rescind or delay compliance requirements with a slew of other rules, including a regulation that set first-ever methane emissions limits on new and modified onshore oil and gas production facilities, and another that updated 1980s-era limits on toxic waste dumping from steam electric power plants.

Environmental groups have brought legal challenges to the Trump administration’s deregulatory actions at every turn, usually asserting the rollbacks are arbitrary or capricious under the Administrative Procedure Act. Optimistic voices in the environmental community maintain that many of the rollbacks at the EPA and Interior Department, for instance, have been too hastily established and will not hold up upon court review.

“We’re not going to let the pressure off for a minute” in defense of clean air and water standards and on public records access, she said.

Also, Holmstead said he did not expect the leadership transition to Wheeler to impact the lawsuits, since the litigation is run by Department of Justice lawyers.