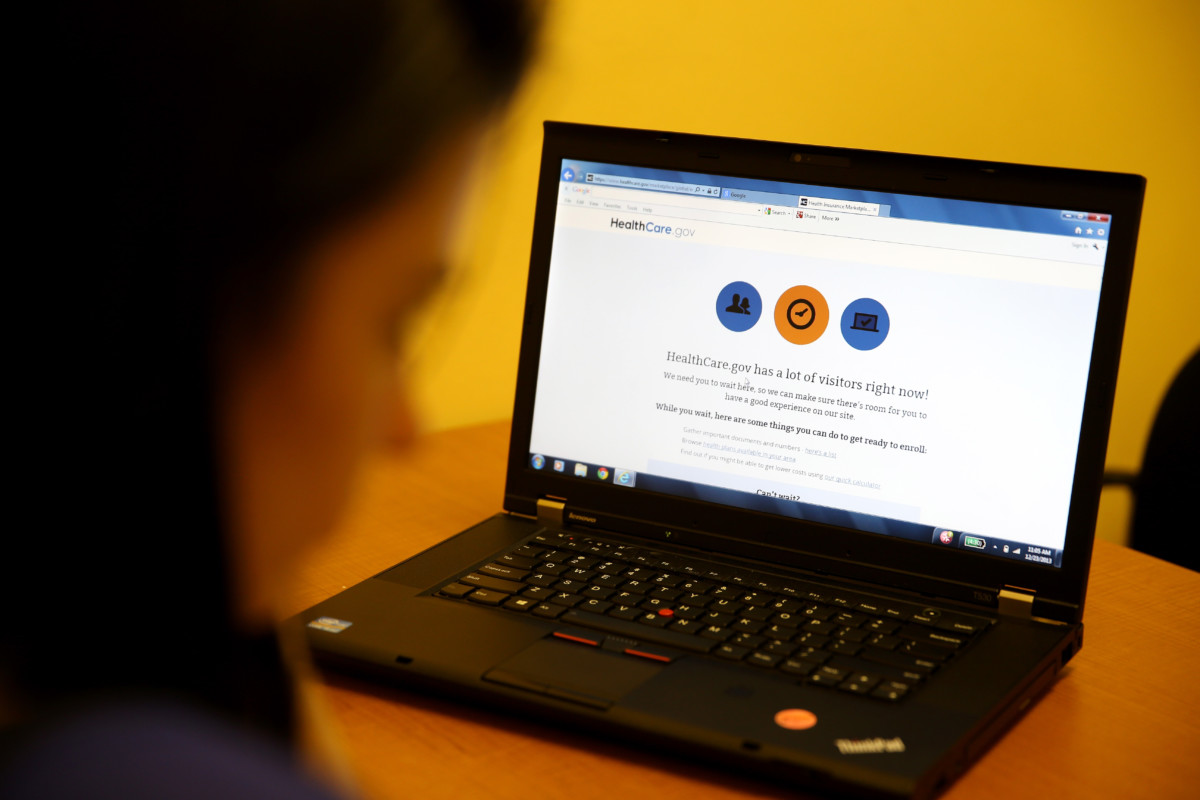 Certified Enrollment Specialist Yanelis Diaz waits on the HealthCare.gov website that reads, "HealthCare.gov has a lot of visitors right now!" as she helps people through the options available to them under the Affordable Care Act at a Miami Enrollment Assistance Center in Miami, Fla. (Photo by Joe Raedle/Getty Images)
By Edward Graham

The federal government’s outdated public-facing websites could be vulnerable to cyberattacks and interference from hostile nation states and hackers — a national security issue one congressman believes eclipses physical threats such as illegal immigration and necessitates protecting and modernizing such sites.

Rep. John Ratcliffe (R-Texas), chairman of the House Homeland Security Subcommittee on Cybersecurity and Infrastructure Protection, said he considers cyber issues to be “our greatest national security threat,” adding that recent threats to U.S. sovereignty have targeted the country’s technical capabilities and underscore the need to improve the country’s infrastructure and online systems.

“Increasingly, it’s the threat to our digital borders where Americans are more likely impacted — not from someone coming across the Rio Grande,” Ratcliffe said in a July 10 interview on Capitol Hill.

While he noted there have been no major cyberattacks on infrastructure, an individual taking advantage of “unsecure connections and websites” could affect “people’s lives in a profound way.”

Ratcliffe is the co-sponsor of legislation (H.R. 5759) that would require federal agencies’ websites to meet certain requirements to allow constituents to more easily engage with government services, including mandating secure connections and allowing Americans to electronically file documents that are currently faxed or mailed to officials.

But Ratcliffe and his colleagues may be facing a daunting task in their modernization efforts.

A November study conducted by the Information Technology and Innovation Foundation, a science and tech policy think tank, reviewed nearly 500 of the most popular federal websites and found that approximately 91 percent failed to perform well in at least one of several analyzed categories, which included page-load speed, mobile friendliness, security and accessibility.

“One of the big takeaways we had from our analysis was that, it’s not just that the government has so many sites, it’s that it has so many sites that are completely different,” Daniel Castro, ITIF vice president and a co-author of the report, said in a July 12 phone interview. “They’re all designed differently. They’re on different platforms; there are different people responsible for them. There’s a lot of reinventing the wheel. But in many cases, it’s not a very good wheel that they’ve reinvented.”

Even with effective security protocols, government websites can run the risk of inconveniencing or alienating constituents.

Rep. Ro Khanna (D-Calif.), who sponsored H.R. 5759, said outdated and poorly designed digital platforms undermine public trust in the federal government, making Americans believe “that the government is antiquated or not up with modern times.” He cited the crash of the Internal Revenue Service’s website on Tax Day this year as an example of a system unequipped to handle the challenges of an increasingly digital world.

“We should be able to have the same competency of user experience as websites in the private sector,” Khanna said in a July 11 interview on Capitol Hill.

Rep. Robin Kelly (D-Ill.), who sponsored H.R. 2331, said in a July 13 phone interview that it was important “to connect citizens with their government” — particularly as more people rely on their mobile devices for online access.

Kelly’s legislation, which requires updated and redesigned federal websites to be mobile-friendly, was signed into law earlier this year by President Donald Trump.

“I remember when we were working on the Connected Government Act — and I didn’t realize this myself — that even FAFSA you could not feed on your mobile phone to apply to get money to go to college or for scholarships,” Kelly said, referring to the Free Application for Federal Student Aid, a form that current and prospective college students can fill out to determine eligibility for financial aid. “That affects a lot of people.”

The Trump administration has also been pursuing technology modernization. For example, then-Veterans Affairs Secretary David Shulkin announced during an Aug. 3, 2017, press conference with Trump that the VA had worked with the White House’s Office of American Innovation and the Department of Justice to create regulations authorizing VA providers to use telehealth technologies and mobile applications to better serve veterans across the country.

Matt Lira, who works for OAI and serves as special assistant to the president for innovation policy, said in a July 11 email that the administration is “leading a sweeping transformation of the Federal government’s technology.”

“The American people deserve high-quality digital services, delivered in an efficient and secure manner,” he added.