Bird and Lime scooters sit parked in front of a building in San Francisco in April 2018. (Justin Sullivan/Getty Images)
By Sam Sabin

Since 2017, an emerging, quickly growing transportation trend has gained traction in numerous U.S. cities and suburbs from an unlikely source: electric-assist, Razor-esque scooters and dockless bicycles.

Some startups behind the new transportation devices, including Bird Rides Inc. and Neutron Holdings Inc.’s Lime, are quickly expanding in the United States, attracting investments that have valued the companies as much as $2 billion and $1.1 billion, respectively. Those numbers rival valuations assigned to more established venture-backed companies like Reddit Inc. and genetic testing company 23andMe Inc.

“There’s a good case to be made that these companies are totally overvalued and Silicon Valley is good at selling visions,” Sarah Kaufman, assistant director for technology programming at New York University’s Rudin Center for Transportation, said by phone on July 9. But she also said these new transportation options could have staying power.

“Because scooters have emerged out of Silicon Valley, for the most part, they’re perceived as a product of wealthy white men in their 20s catering to an audience like themselves,” she said. “That being said, it’s possible for the rest of the world to take these on and make good use of them.”

According to a new Morning Consult survey, conducted between June 28 to July 3 among 1,082 urban-based adults and 1,988 suburb-based adults, young adults are the most promising demographic for these bikes and scooters — but they’re not alone.

Overall, 41 percent of adults in cities said they are likely to use a dockless bike if their city were to adopt a program, and 38 percent are likely to utilize an e-assist scooter program. In the 18-29 age group, which has a margin of error of 5 percentage points, 49 percent said they would be likely to use bikes and 42 percent would use scooters. 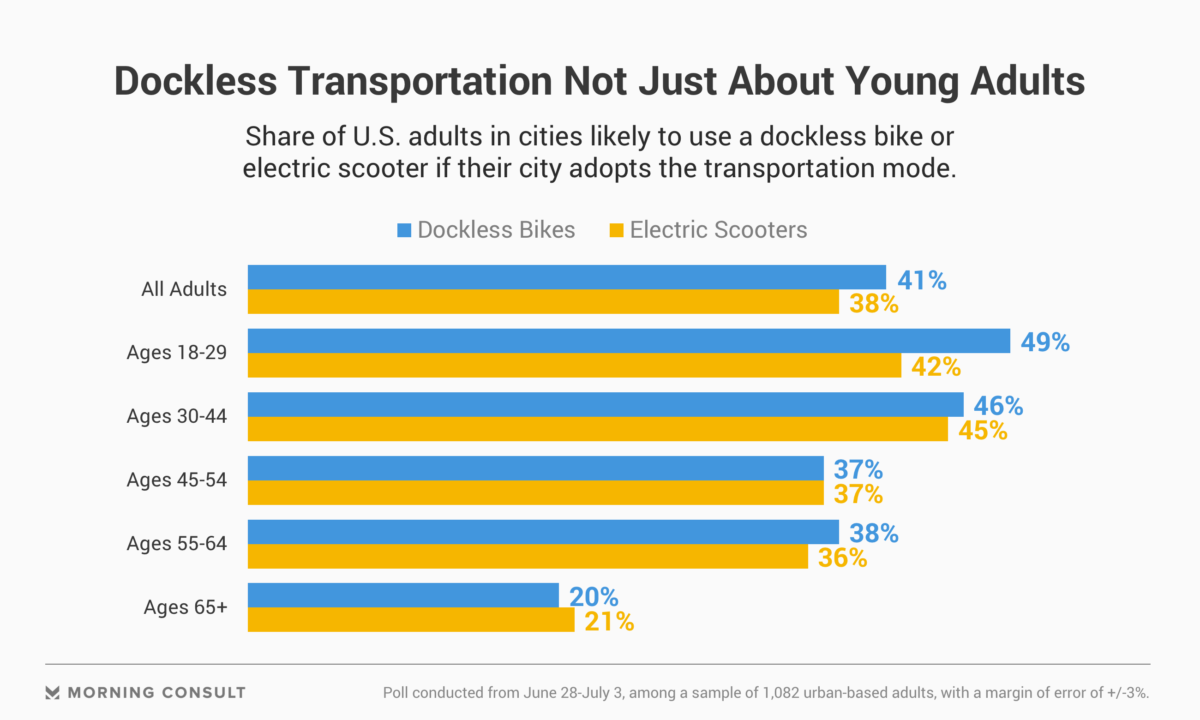 But the survey suggests that dockless bikes and e-assist scooters could gain some traction among older users, as well. For example, among those ages 45-54, whose group has a margin of error of 7 percentage points, 37 percent said they are likely to use a dockless bike or scooter.

E-scooters and dockless bikes have set out to disrupt a quickly growing bike-share market. According to a National Association of City Transportation Officials report released May 1, docked and dockless bike-share ridership in the 2017 calendar year increased 25 percent from 2016 to 35 million trips, rivaling the 31.7 million trips reported by Amtrak in fiscal year 2017.

Dockless bikes accounted for 44 percent of all bike-share bicycles in the country by the end of 2017, but they made up only 4 percent of the all trips, indicating the potential for growth in this segment.

In a 2016 survey of 5,564 current and 544 former members of Capital Bikeshare, Washington’s city-run docked bike-share program, 15 percent of its riders fell in the 45-54 age group, and 51 percent of riders were under the age of 35. The recent Morning Consult survey figures, however, suggest the possibility that dockless bikes and electric scooters could become more popular than docked systems among 45- to 54-year-olds.

Since launching in Greensboro, N.C., in June 2017, Lime has grown its fleet of bicycles and scooters to 35,000 and now operates in more than 70 cities, a spokesperson said in an email on July 18. On Monday, Lime announced its customers had completed 6 million rides using e-scooters and dockless bikes since its launch.

Bird operates electric scooters in 22 cities to date, but the company declined to disclose how many it has on the streets. It said in a press release in April that it had reached 1 million rides for its electric scooters since the program first launched in Los Angeles in September 2017.

Bird declined to comment for this story. Lime said by email Wednesday that the company works with local governments “to ensure its mobility options can reach the most people.”

According to the Morning Consult survey, 13 percent of those who live in urban environments say to the best of their knowledge their city has e-assist scooters available, and 31 percent say their city has dockless bicycles. Among the city dwellers who are aware of the new modes of transportation, 38 percent have tried riding a scooter, and 24 percent have given a dockless bike a try.

The electric bikes and scooters are still “broadly in a novelty space,” Jake Varn, a policy analyst for the Bipartisan Policy Center’s housing and infrastructure projects, said in a phone interview on July 10.

“A lot of people in the millennial generation and their parents’ generation saw scooters as toys in the Razor scooter trend, and this is a continuation of that,” he said

This, however, creates an uphill journey for the startups that are trying to make their bikes and scooters a mainstay transportation option.

A plurality of both urban (58 percent) and suburban (66 percent) residents still drive themselves to work or school each day, and each group is very or somewhat satisfied with their commute. 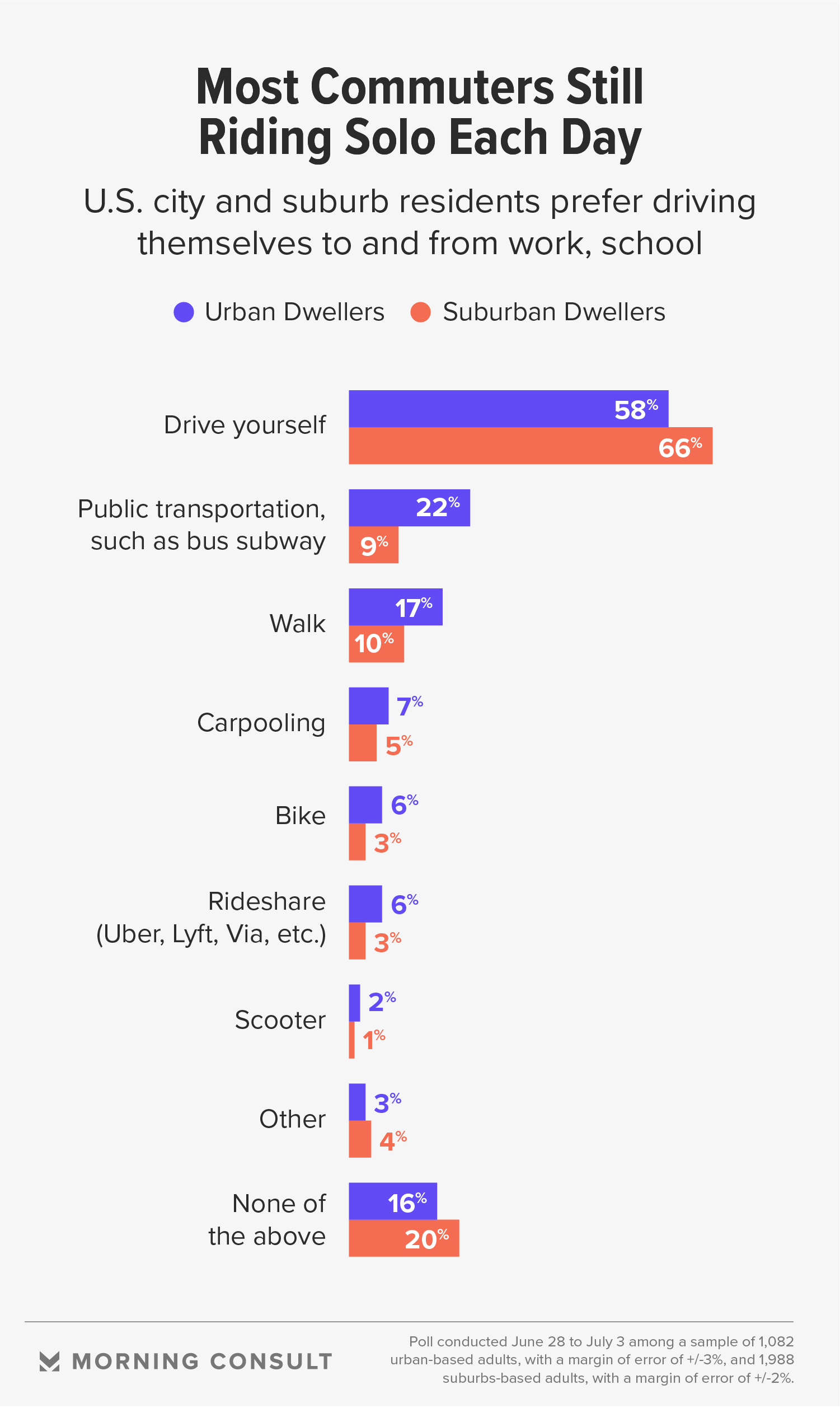 Convenience plays an important role in a rider’s transportation decision. For most adults, in both urban and suburban communities, convenience, speed of transport, and cost are the three driving factors in determining how they get to and from work or school.

Many scooters and dockless bikes charge an initial unlocking fee of a few dollars plus a few cents per mile of the ride, but scooters alone can be difficult to track down in cities and only achieve a speed of up to 15 miles per hour when fully charged.

Though it’s far from certain that the startups represent the future of transportation, experts say they can help solve what is called the “last-mile problem,” which impacts residents who live more than a mile from a public transportation stop.

“In bike-share systems that depend on docks, the dock might not be near the user’s destination, so these dockless systems come into play,” Kaufman said.

Perhaps the biggest hurdle to scooters’ popularity, specifically, is the issue of safety, both for the rider and the wider public, especially as the devices are too slow for the bike lane and too fast for the sidewalk, Kaufman said. 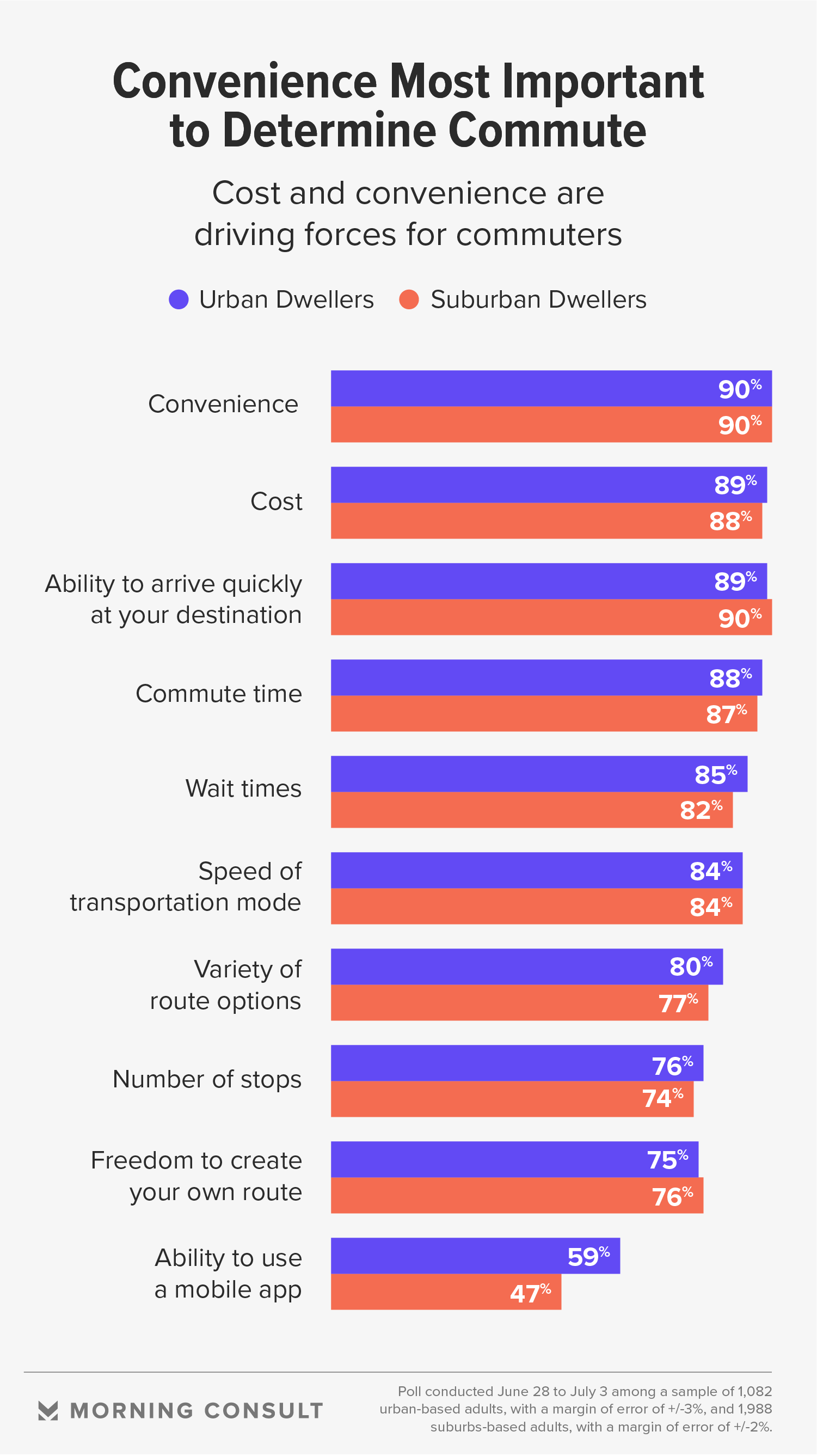 To tackle these rider safety concerns, local officials are exploring their next regulatory steps.

“Cities are still reeling from Uber’s total disregard for regulations the first time around, so they are kind of trying to figure out how can they regulate it this time,” Kaufman said. “In some places, cities are having this knee-jerk response and just banning scooters, but in other places, they’re being more creative.”

For many transportation experts, 2018 feels a lot like a replay of 2010, when Uber Technologies Inc. began deploying a new, soon-to-be popular service on city streets without warning local officials.

On July 11, NACTO released its guidelines for how to regulate “shared active transportation,” covering topics such as ensuring public safety of pedestrians and riders to regulations on data collection from the public-private data-sharing agreements, with the hope of creating a blueprint for cities seeking out advice on how to regulate dockless transportation.

Up until this point, each city has had a different relationship with the new wave of dockless transportation, mostly playing out in one of two ways: In one scenario, which is the case for cities like Washington and Seattle, city regulators create a pilot program to allow dockless startups to test out their technologies on city streets for a set period of time.

In the second scenario, dockless transportation startups follow the Uber and Lyft Inc. model of entering into cities without business permits or licenses and dealing with any city-led opposition later. In San Francisco, e-assist scooters have been banned in the city as of June 4 until local lawmakers develop new permit regulations.

However, Varn, of the Bipartisan Policy Center, said he sees cities taking more of a “cautiously optimistic approach” to the scooters’ introduction.

“There’s more potential for them to be complementary than the Ubers and Lyfts are, especially given the lack of an entrenched taxi industry,” Varn said.

“The larger idea here is not so much the scooters themselves, but the openness to new forms of getting around,” Kaufman said. “We can open ourselves up to new ways of doing things.”