Most of the vulnerable Senate Democrats outperform Trump

While many of the vulnerable Senate Democrats on the ballot in November have seen their popularity decline since the beginning of 2017, most of them remain more popular in their states than President Donald Trump.

The latest edition of Morning Consult’s Senator Approval Rankings — based on surveys with more than 330,000 registered voters from April 1 through June 30 — shows modest drops in net approval over the second quarter for three Democrats running for re-election in states Trump won during 2016: Sens. Jon Tester of Montana (-9 points), who has the support of half of the voters in the state, and Bill Nelson of Florida and Heidi Heitkamp of North Dakota (both -8 points), who were each backed by 44 percent of voters in their states.

But that trio, along with five other Senate Democrats running in a Trump-won state this fall, still sport higher net approval ratings than the president. That’s a positive development ahead of a midterm election cycle, which often serves as a referendum on the president and benefits out-party members running for re-election. The last time an incumbent from the party not in control of the White House lost re-election was in 2002, when former Sen. Saxby Chambliss (R-Ga.) ousted Democrat Max Cleland. 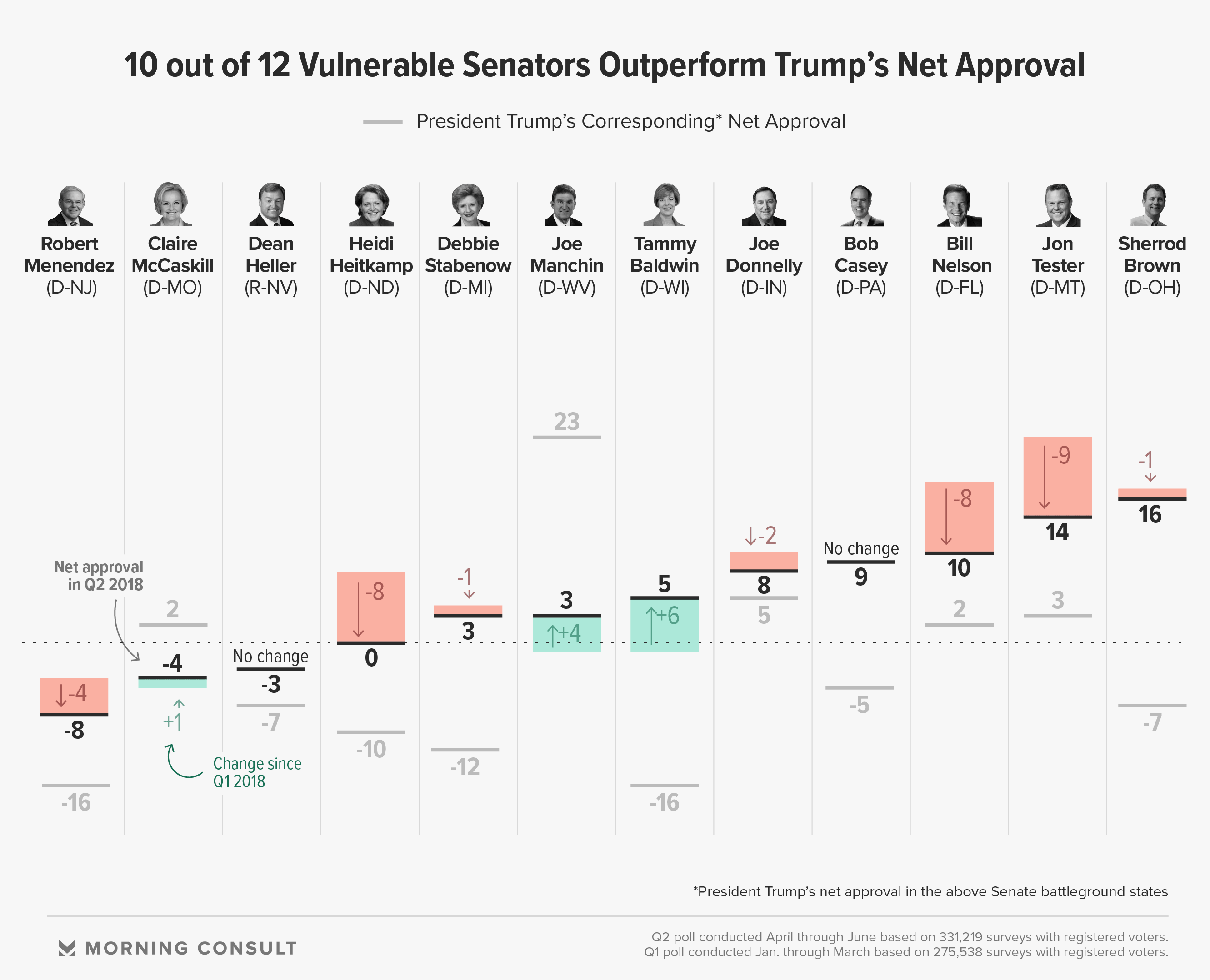 Trump has a better net approval than a Democratic incumbent in just two of the states he won during the 2016 election, Missouri and West Virginia.

In the Show Me State, Trump’s net approval is 6 points higher than Democratic Sen. Claire McCaskill’s. The two-term incumbent is 1 point ahead of her opponent, state Attorney General Josh Hawley, according to an average of polls compiled by RealClearPolitics as of July 24.

And in the Mountaineer State, Trump has a 20-point edge in popularity over Sen. Joe Manchin, the most conservative member of the Senate Democratic Caucus; however, Manchin leads his challenger, state Attorney General Patrick Morrisey by 7 points on average, according to RealClearPolitics as of July 24.

Sen. Dean Heller, the lone Republican incumbent running for re-election in a state carried by 2016 Democratic nominee Hillary Clinton, remains 3 points underwater and saw no change in sentiment among Nevadans since the first quarter.

Much is made of Senate Majority Leader Mitch McConnell’s lack of popularity in his home state of Kentucky. He is consistently the least-popular member of the chamber, finishing last in every edition of the 100-deep list since its inception in late 2015. (In the latest survey, 56 percent of Kentuckians disapproved of his job performance.)

But the 115th Congress has also proved tough jousting for McConnell’s Democratic counterpart, Senate Minority Leader Chuck Schumer of New York. Voter sentiment toward the Brooklyn-born leader of the Senate Democratic Caucus has grown bearish since the first quarter of 2017, when 63 percent of New Yorkers approved of his job performance and 27 percent disapproved.

In the newest survey, half of respondents said they approved of Schumer, compared with 34 percent who didn’t. That’s a net 20-point swing since Republicans came into power in the White House, and mirrors McConnell’s own 23-point slide during the same time frame.

Sens. Jeff Flake of Arizona and Bob Corker of Tennessee, two Republican senators who opted to retire at the end of the year after quarreling with Trump, have continued to criticize his temperament and antagonistic trade policy.  Both remain unpopular with party members in their home states.

In 2014, Republicans took control of the chamber in dramatic fashion, flipping nine seats en route to a 10-seat majority. But with an unpopular president in the White House, several of those victorious and ambitious newcomers, sometimes referred to as the “bear den” by other Senate Republicans, are heading into a re-election cycle next year under a decidedly different political environment.

To varying degrees, senators such as Alaska’s Dan Sullivan, Iowa’s Joni Ernst, Colorado’s Cory Gardner and North Carolina’s Thom Tillis have all seen their fortunes decline in the eyes of voters since the beginning of 2016, in Morning Consult’s first quarterly rankings. Sullivan (-36 points) and Gardner (-23 points) have been bruised more than Ernst (-10 points) and Tillis (-9 points), but they also started out with higher rankings.

With their net approval hovering right around even in the past quarter, all four senators will have their work cut out for them if they are to stick around long enough to ascend the party ranks.

* Morning Consult did not collect second-quarter data on Cindy Hyde-Smith, who became a Mississippi senator in April.