The Food and Drug Administration suggested last week it would begin enforcing the agency’s definition of milk, which references products that come from animals that lactate, posing a potential marketing challenge for makers of plant-based beverages that use the term.

A new Morning Consult/Politico poll suggests some consumer support for the move, with 46 percent of U.S. adults saying the label “milk” should not be used to describe nondairy beverages. The survey of 2,203 adults was conducted July 19-23, with a margin of error of 2 percentage points. 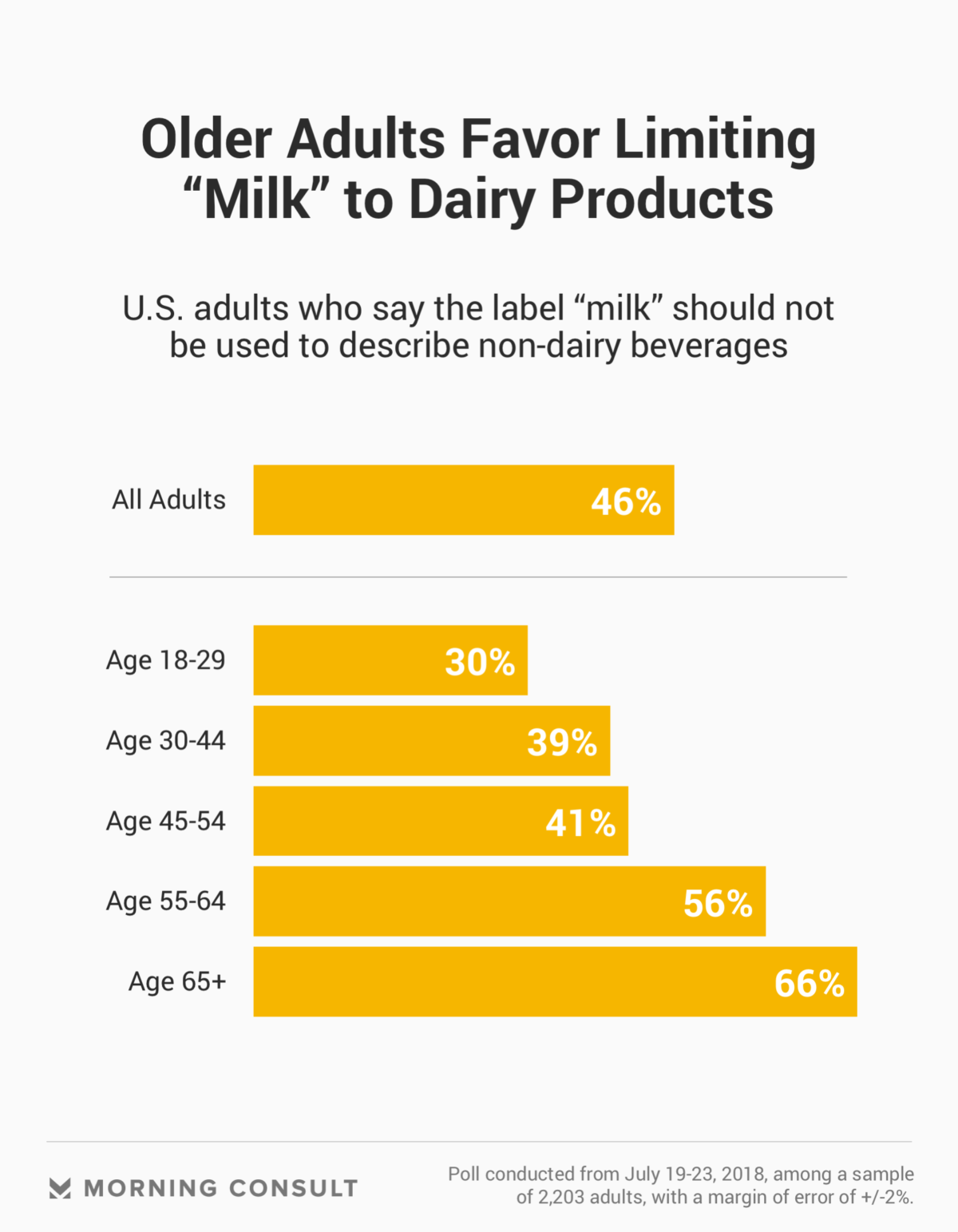 On July 17 at the Politico Pro Summit, FDA Commissioner Scott Gottlieb said the agency plans to issue a document outlining changes to its policies that govern the marketing of milk.

“You see the proliferation of products like soy milk and almond milk calling themselves milk, and if you look at our standards of identity, there is a reference somewhere to a lactating animal,” Gottlieb said. “And an almond doesn’t lactate, I will confess.”

The debate between dairy producers and plant-based milk substitute producers over the use of the word “milk” isn’t new. In January 2017, Sen. Tammy Baldwin (D-Wis.) introduced a bill, S. 130, that would stop nondairy drink manufacturers from using “milk” to describe their products. However, the bill has languished since then.

A few weeks after the introduction of the bill, Capstone Law APC filed two class-action suits in Los Angeles County against plant-based beverage providers, one against WhiteWave Foods Co., which produces Silk, and another against Blue Diamond Growers Inc., which produces Almond Breeze. The Blue Diamond suit was dismissed on the grounds that “the claim of customer confusion is patently implausible,” and the other lawsuit was dismissed on the grounds that the FDA would be a better venue for the discussion.

Charles Lindsey, associate professor of marketing in the University at Buffalo School of Management, said Monday that the new conversation could be happening too late, given that the terms “soy milk” and “almond milk” are already a part of the consumer lexicon.

“The dairy industry has a perception that this is going to help the dairy industry and the declining sales,” Lindsey said. “But I’m not so sure there’s necessarily a clear winner and a clear loser here as a result of the FDA enforcing a more narrow identity definition of milk.”

“The issue though is that when something is called milk, it has this healthy connotation, and what we think people don’t understand is the level of disparities in nutrition,” Galen said.

In Canada, the term “milk” can’t be used for nondairy products, so many brands instead opt to call it an “almond beverage” or an alternative descriptor in markets outside of the United States, Galen said.

“A consumer is equally as likely to be confused by e-books as they are to almond milk,” Almy said.

“If the FDA were to take a very aggressive approach to how these products can be labeled, it would affect not just the plant-based producers, but a wide swath of the food industry,” Almy said.

The Good Food Institute also said by email that if the FDA were to ban dairy terms on plant-based products, the group would sue.

The FDA declined to comment for this story beyond pointing to Gottlieb’s comments at the Politico event.