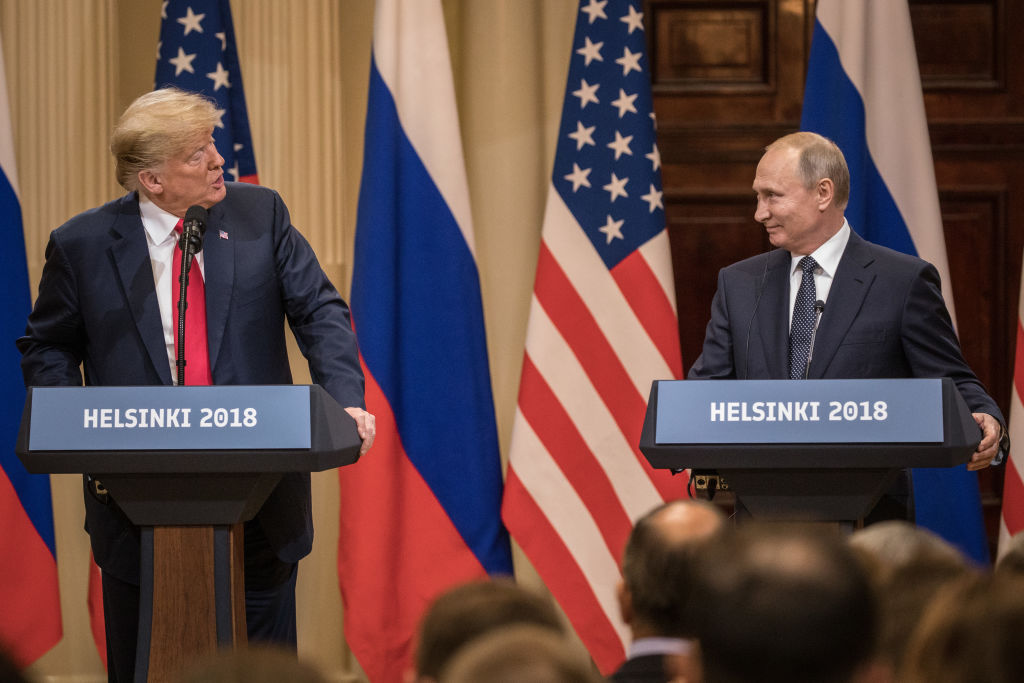 President Donald Trump and Russian President Vladimir Putin speak to the media during a joint press conference after their summit on July 16 in Helsinki, Finland. (Photo by Chris McGrath/Getty Images)
By Eli Yokley

Republican lawmakers have expressed misgivings about the idea of Russian President Vladimir Putin visiting Washington, D.C., but the bulk of Republican voters approve of it – putting the party’s officials at odds with the GOP base.

A new Morning Consult/Politico poll found 73 percent of Republicans support President Donald Trump hosting Putin in Washington in the fall – joining a 43 percent plurality of all voters in support of the meeting. 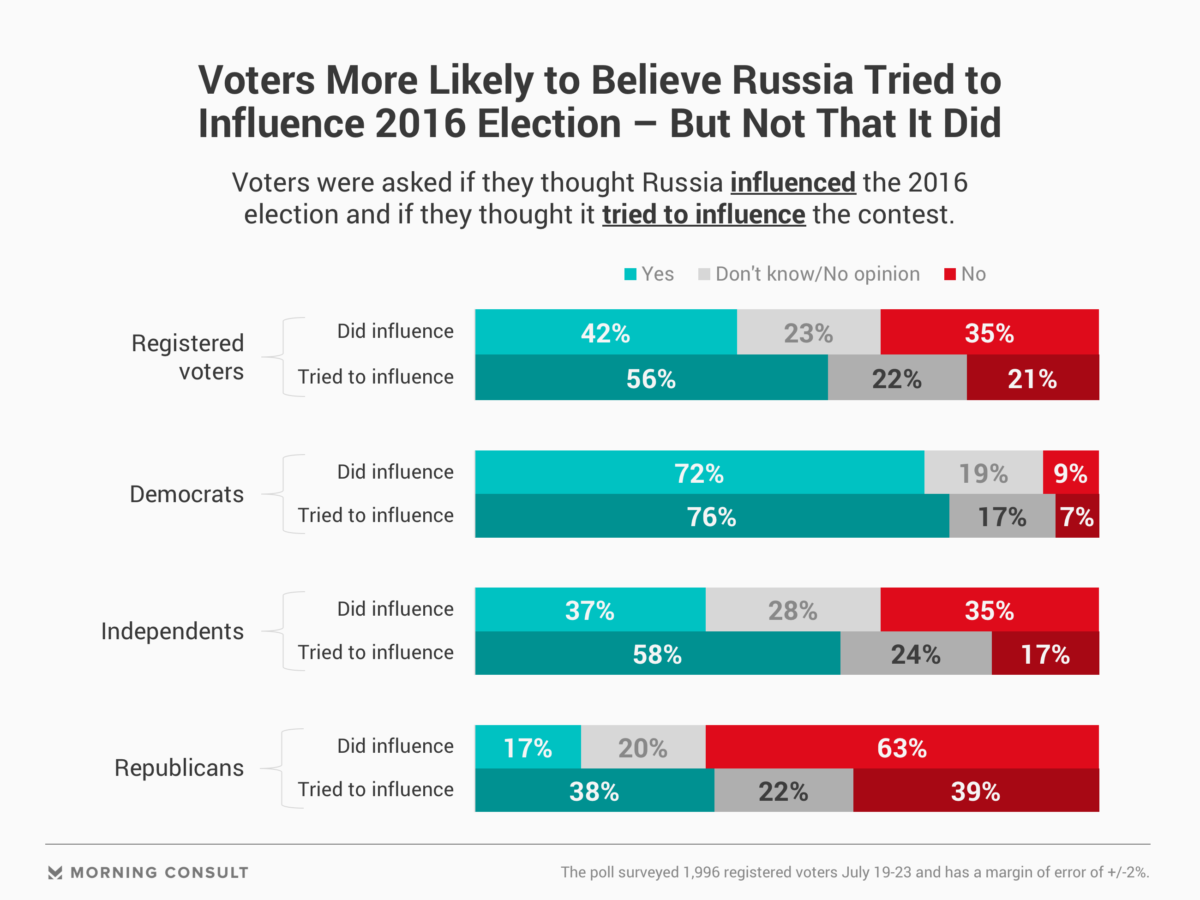 The prospect of another meeting – this time in Washington – has prompted some top Republicans to voice their reservations. Sen. John Cornyn (R-Texas), the party’s whip, said he’d prefer that Trump put another meeting on the “back burner for a while,” according to The Hill, and Sen. Pat Toomey (R-Pa.) told Politico “I’m not sure that’s such a great idea at this point.”

When asked by reporters about a possible meeting with Putin, House Speaker Paul Ryan (R-Wis.) on Tuesday said Congress “would certainly not be giving him an invitation to do a joint session,” since that is “something we reserve for allies.” Ryan added that he is comfortable with presidents meeting one-on-one with foreign leaders, but what matters is the message they present.

“If the message is ‘stop meddling in our country’ – ‘stop violating our sovereignty’ – then I support that,” Ryan said.

Related: Voters from Both Parties Warm Toward Russia Ahead of Trump-Putin Summit

Senate Majority Leader Mitch McConnell (R-Ky.) sang a similar tune, telling reporters later that day that “the speaker and I have been clear that Putin would not be welcome up here at the Capitol.”

The Kremlin has not formally accepted Trump’s invitation. 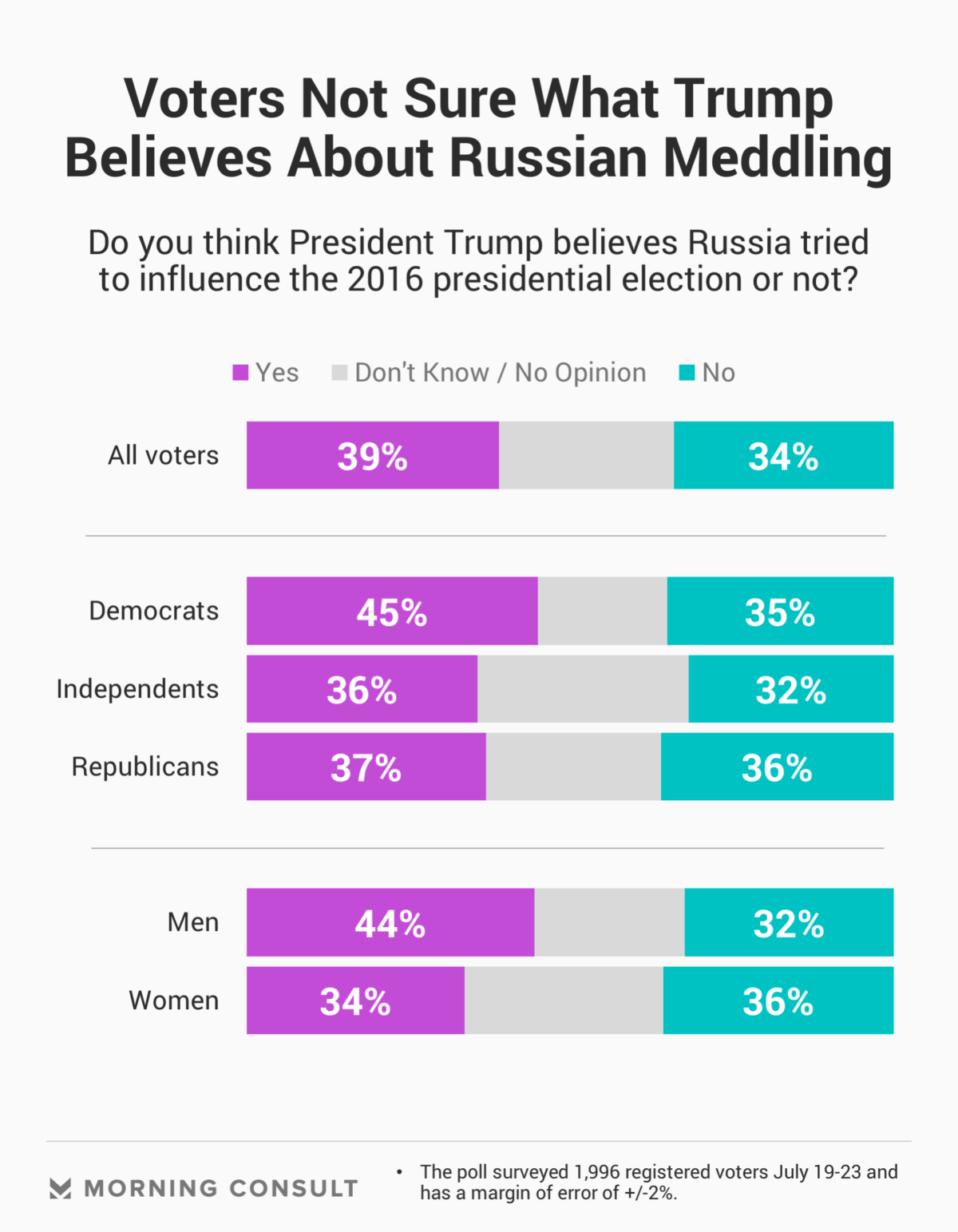 The White House spent the days following Trump’s summit with Putin seeking to clarify the president’s stance on Russian interference in the 2016 election.

Standing alongside the Russian president at their July 16 summit, Trump cast doubt on U.S. intelligence reports that accused Russia of meddling, saying, “I don’t see any reason why it would be.”

Back in Washington, Trump said he misspoke, saying the word “would” when he meant to say “wouldn’t.”

“I accept our intelligence community’s conclusion that Russia’s meddling in the 2016 election took place,” he told reporters the day after the summit, adding, “Could be other people also; there’s a lot of people out there.”

When asked about their own views, 42 percent of all voters, a plurality, said they believe Russia did influence the 2016 presidential election – while a larger share, 56 percent, said Russia tried to influence the contest.

Sixty-three percent of Republicans said Russia did not influence the 2016 election, down 6 percentage points since voters were asked the same question in January; other voters’ views were largely unchanged.

Republican voters were almost evenly split on whether Russia attempted to sway the last presidential election, 38 percent to 39 percent.

Trump said Tuesday he was concerned “Russia will be fighting very hard to have an impact on the upcoming Election,” but “based on the fact that no President has been tougher on Russia than me, they will be pushing very hard for the Democrats.”

A majority of voters agreed with Trump that Russia would try to influence the 2018 midterms, and a 43 percent plurality said the same about the 2020 presidential contest.

But when it comes to who would benefit, U.S. voters had a different perspective: 47 percent thought Russia was more likely to help GOP candidates in 2018, compared to 13 percent who said it would help Democratic candidates.