66% in poll say they've heard of ‘Unhinged’ vs. 49% who were aware of Wolff’s tell-all book in January 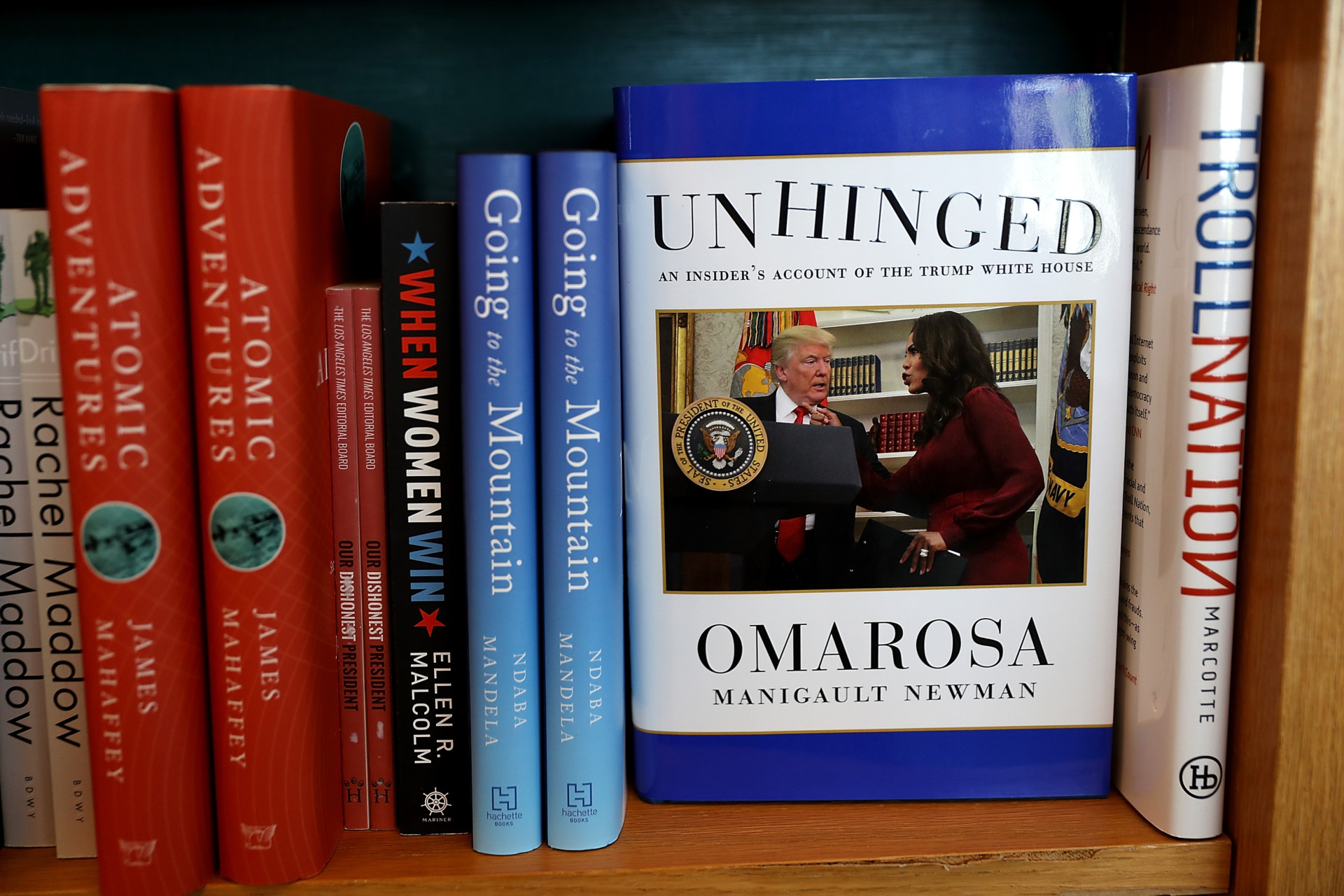 A new book by Omarosa Manigault Newman, "Unhinged: An Insider's Account of the Trump White House", is displayed on a shelf at Book Passage on August 14, 2018 in Corte Madera, Calif. (Photo by Justin Sullivan/Getty Images)
By Eli Yokley

Compared with the Jan. 5 release of author Michael Wolff’s controversial account of the beginning of the Trump administration, “Fire and Fury: Inside the Trump White House,” more voters are aware of Manigault Newman’s book and have stronger opinions about it.

An Aug. 16-18 Morning Consult/Politico poll found a majority of voters – 66 percent – had heard some or a lot about her new book, compared to less than half (49 percent) who said the same about Wolff’s book in a Jan. 4-5 poll. Twenty-one percent said they haven’t heard anything at all about “Unhinged,” compared 32 percent who said the same of “Fire and Fury.”

Along with more awareness of the book came stronger views on its credibility, according to the latest poll, which surveyed 1,974 registered voters in the days following the Aug. 14 release of Manigault Newman’s book. 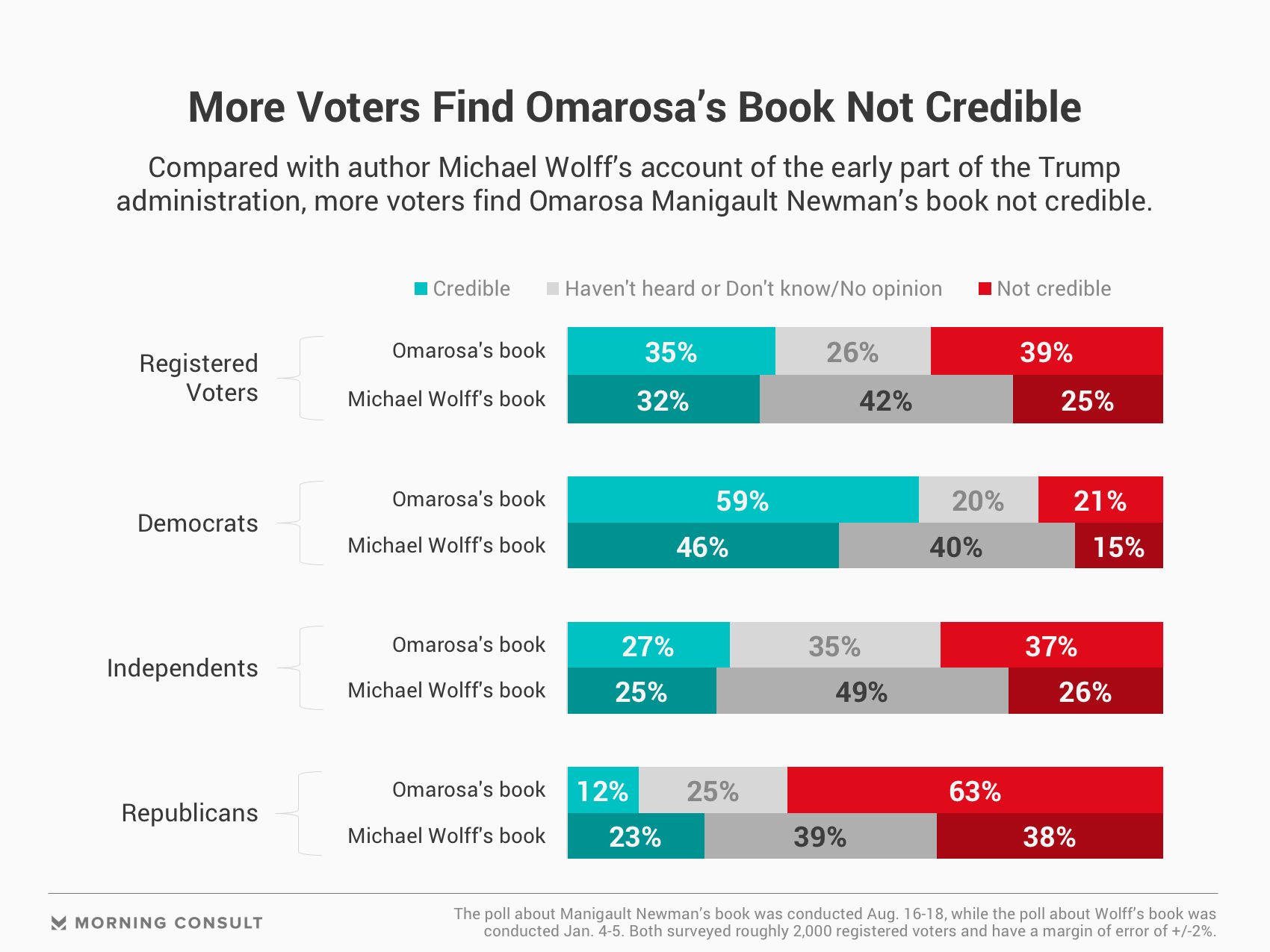 A 39 percent plurality said Manigault Newman’s book was not credible, while 35 percent described it as credible. When it comes to Wolff’s book, the share of voters in January who described it as not credible was 25 percent, while 32 percent said it was credible. A 42 percent plurality said they didn’t know, hadn’t heard of or didn’t have an opinion of Wolff’s book.

Among Republicans, 12 percent view “Unhinged” as credible, compared to 63 percent who said it is not credible. In January, 38 percent of GOP voters said Wolff’s book wasn’t credible.

Robert Thompson, director of the Bleier Center for Television & Popular Culture at Syracuse University, said that while both authors took part in ambitious marketing campaigns to promote their books, Manigault Newman, who first came to the public’s notice on “The Apprentice,” “had already been a household name for over a decade.” Both authors, he noted, have faced questions about their credibility.

“The fact that Wolff is a journalist and Manigault Newman is a reality star may have something to do with this, but for many people these days ‘journalist’ doesn’t necessarily mean credible,” he said in an email Thursday. “Of course, old-fashioned sexism should also be considered in the equation.”

Related: New Poll Suggests Voters Have Made Up Their Minds on What Trump Is Like

The January release of Wolff’s book was a major news event, drawing unmet demands from the president’s legal team that the book’s publisher, Henry Holt & Co., halt its release and leading to the departure of Steve Bannon as chairman of right-wing website Breitbart News.

Trump’s lawyers have made no such calls about Manigault Newman’s book — and so far, there are no prominent careers suffering because of it. But in her promotion of the book, she has taken big shots at Trump in national television appearances.

Manigault Newman alleges Trump has used the N-word and said it is on tape (Trump denies using the racial slur). She has also said she has tapes of conversations from her time on the campaign and in the White House, and released one that purports to be her own December firing by White House chief of staff John Kelly.

The Kelly tape elicited a response from the president, who said on Twitter, “Good work by General Kelly for quickly firing that dog!”

Trump has repeatedly used similar language – such as “like a dog” – to refer to people being fired, including tweets about journalist David Gregory, conservative activist and commentator Erick Erickson, Bannon and even Sen. Ted Cruz’s 2016 presidential campaign communications adviser. But some expressed outrage at Trump’s use of the word to describe Manigault Newman, a black woman.

More than half of voters (51 percent) described Trump as racist in the latest poll, up 6 points since a survey conducted last month. That includes 65 percent of Hispanic voters and 76 percent of African-American voters. The survey’s margin of error is 2 points.