Alabama Sen. Doug Jones ‘Between a Rock and a Hard Place’ Ahead of SCOTUS Vote 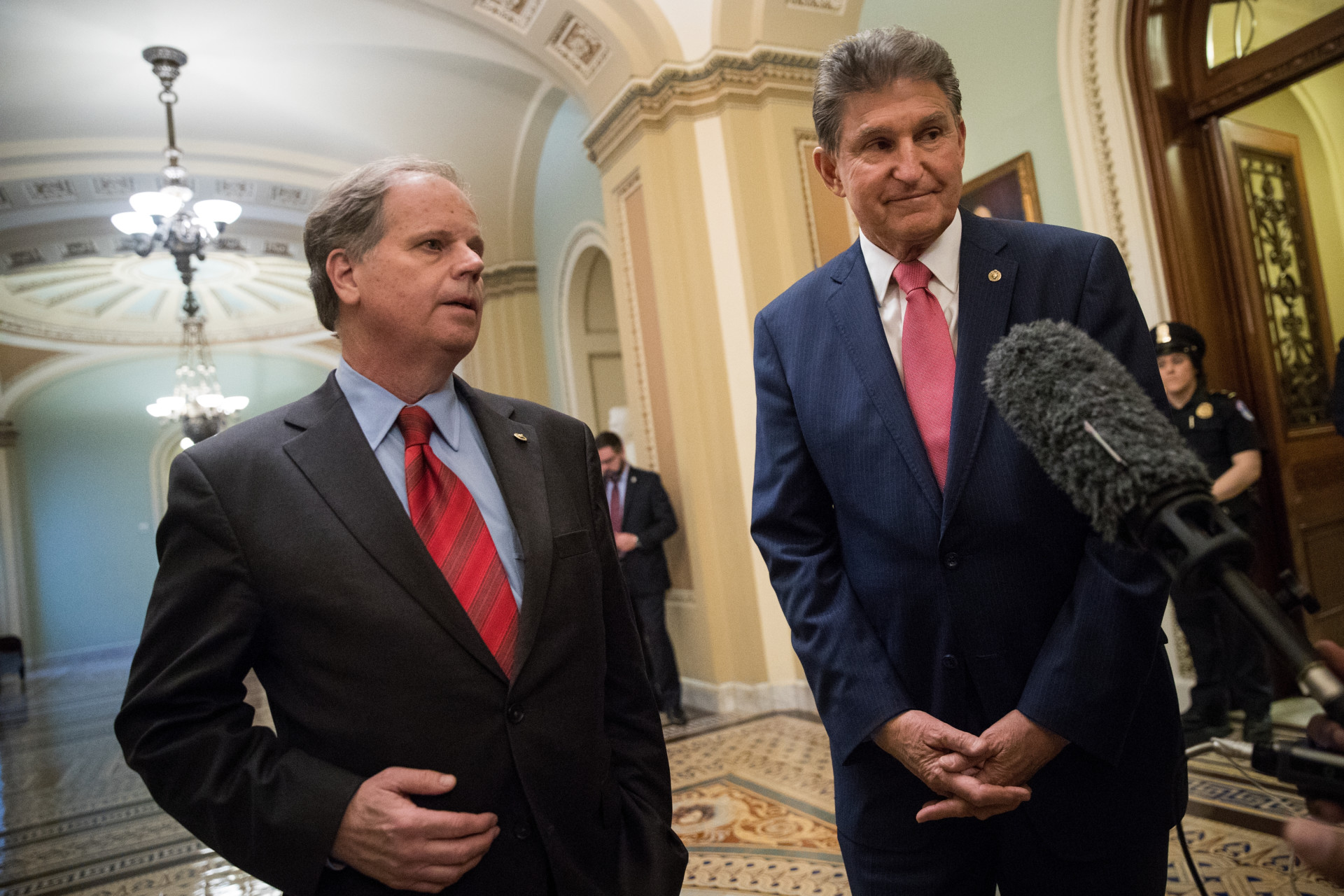 Doug Jones has been Alabama’s junior senator for less than a year, and the pending Supreme Court confirmation vote for Judge Brett Kavanaugh will likely go a long way in deciding how much of a future he has in the chamber.

The Republican National Committee and various conservative outside groups have splashed cash in a bid to earn a “yes” vote from Jones, the only Senate Democrat from a Trump-won state who isn’t already on record with a Supreme Court vote during the 115th Congress.

Morning Consult polling sheds light on the political calculations that Jones — who is up for re-election in 2020 — must take into account ahead of the planned Oct. 1 confirmation vote. The upshot: No matter his decision, some people are going to be upset. Given that in December he defeated Roy Moore, who faced accusations of child molestation during the home stretch of the special election campaign, by only 1.6 percentage points (49.9 percent to 48.3 percent), even a small drop in support would undermine any re-election attempt. 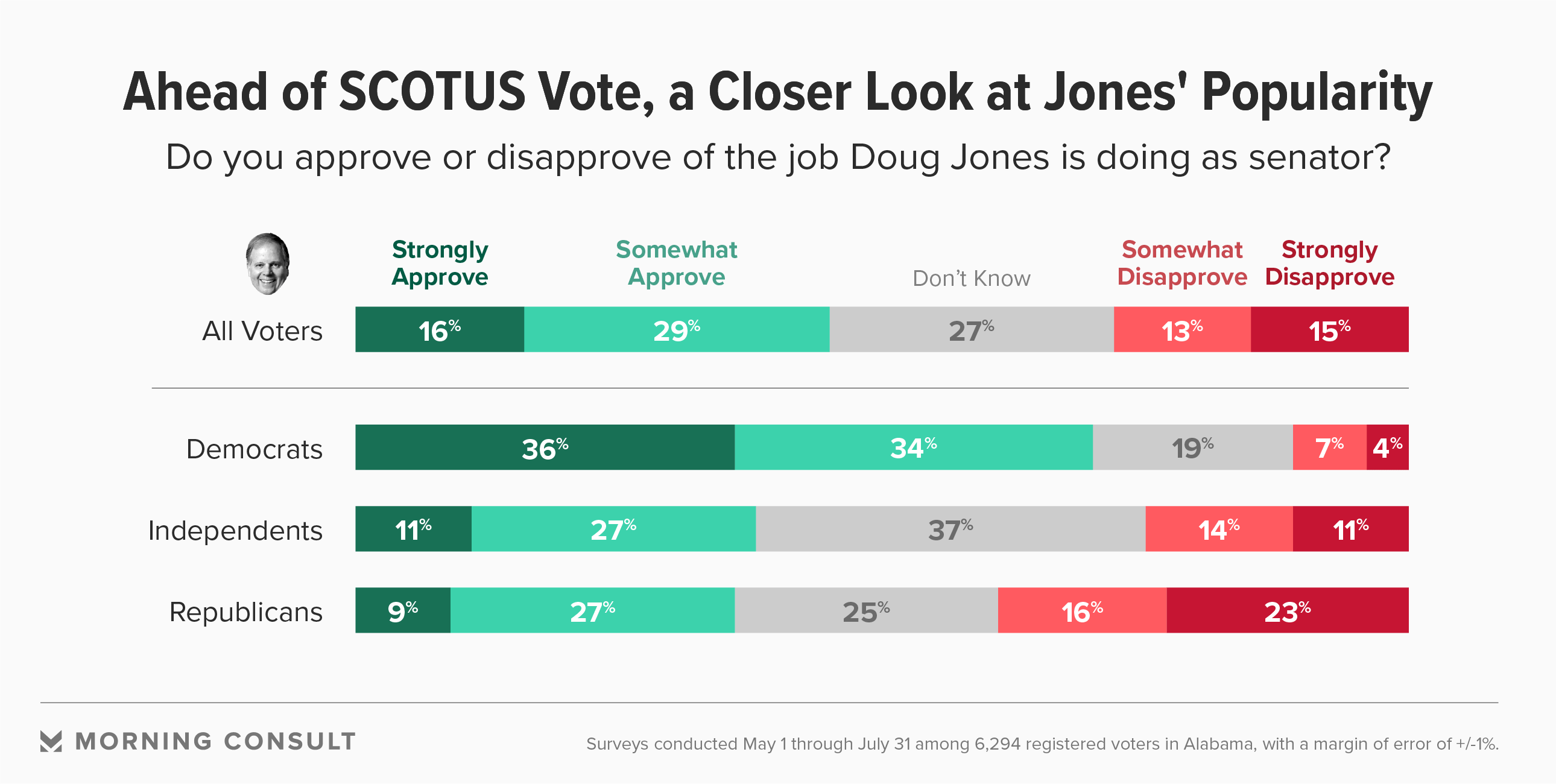 On the surface, Jones might appear more popular than many would expect. Morning Consult surveys conducted May 1 through July 31 among nearly 6,300 registered voters in Alabama showed 45 percent approved of Jones’ job performance, nearly the same share who backed the state’s senior GOP statesman, Senate Appropriations Chairman Richard Shelby; 28 percent disapproved of Jones and 27 percent had no opinion. (The margin of error is 1 percentage point.)

A closer look reveals that a significant portion of Jones’ support during that time frame came from Republicans: He was just 3 points underwater among GOP voters, with 36 percent backing him. But that support is lukewarm, with 27 percent of all GOP voters only somewhat approving of his job performance. That suggests a vote against a Supreme Court nominee tapped by President Donald Trump could bleed support.

“He’s going to be put between a rock and a hard place as his constituency has very conservative values,” Mark Kennedy, a former Alabama Supreme Court justice, state Democratic Party chairman and friend of Jones’, said during a Monday phone interview as he roamed the aisles of Walmart. “Anytime you represent a conservative state, there’s an ongoing battle as it relates to following your views and your mindset, and to what the people want to do.”

Trump has enjoyed solid support from the vast majority of Republican voters throughout his White House tenure, and Alabama is one of his stronghold states.

Along with South Dakota, Alabama has seen the firmest support for Trump since his inauguration than anywhere else in the country, posting a net slide of just 6 percentage points, according to Morning Consult’s Tracking Trump surveys, which show him losing an average of 17 points in all 50 states and the District of Columbia during that time frame.

While Kavanaugh has the lowest net support among SCOTUS nominees since Robert Bork in 1987 according to Gallup polling, his confirmation was backed by 54 percent of registered voters in Alabama in a July survey from the conservative advocacy group Judicial Crisis Network. That would make a “no” vote from Jones unforgivable for many of those voters, and could put him behind the eight ball just as he would be looking to ramp up his re-election campaign.

And as tepid support for Jones among Republicans is understandable, he also has his own base to worry about.

From May through July, Jones had the support of 70 percent of Democrats, but that approval was split fairly evenly: 36 percent strongly backed him and 34 percent said they somewhat approved. The latest national Morning Consult/Politico poll found Democratic voters opposing Kavanaugh’s confirmation by a nearly 5-to-1 margin. (The margin of error is 2 percentage points.)

That leaves Jones in a tough spot when it comes to his decision on Kavanaugh, whose confirmation is backed by 66 percent of GOP voters in the same poll.

In an Aug. 22 MSNBC interview — after a guilty verdict for former Trump campaign chairman Paul Manafort and a guilty plea from Trump’s longtime attorney Michael Cohen — Jones called for Senate Republicans to press a “pause button” on the nomination and let the unfolding legal process “play out just a little bit,” something Senate Majority Leader Mitch McConnell (R-Ky.) is unlikely to heed.

“Doug owes it to himself and owes it to the people of Alabama to do what he thinks is right,” Kennedy said. “If you spoke to someone else in this Walmart pharmacy, you’d probably get a different opinion.”

Jones’ office did not respond to a request for comment.

Correction: A previous of this story misstated the number of Senate Democratic Caucus members who have yet to record a Supreme Court vote.