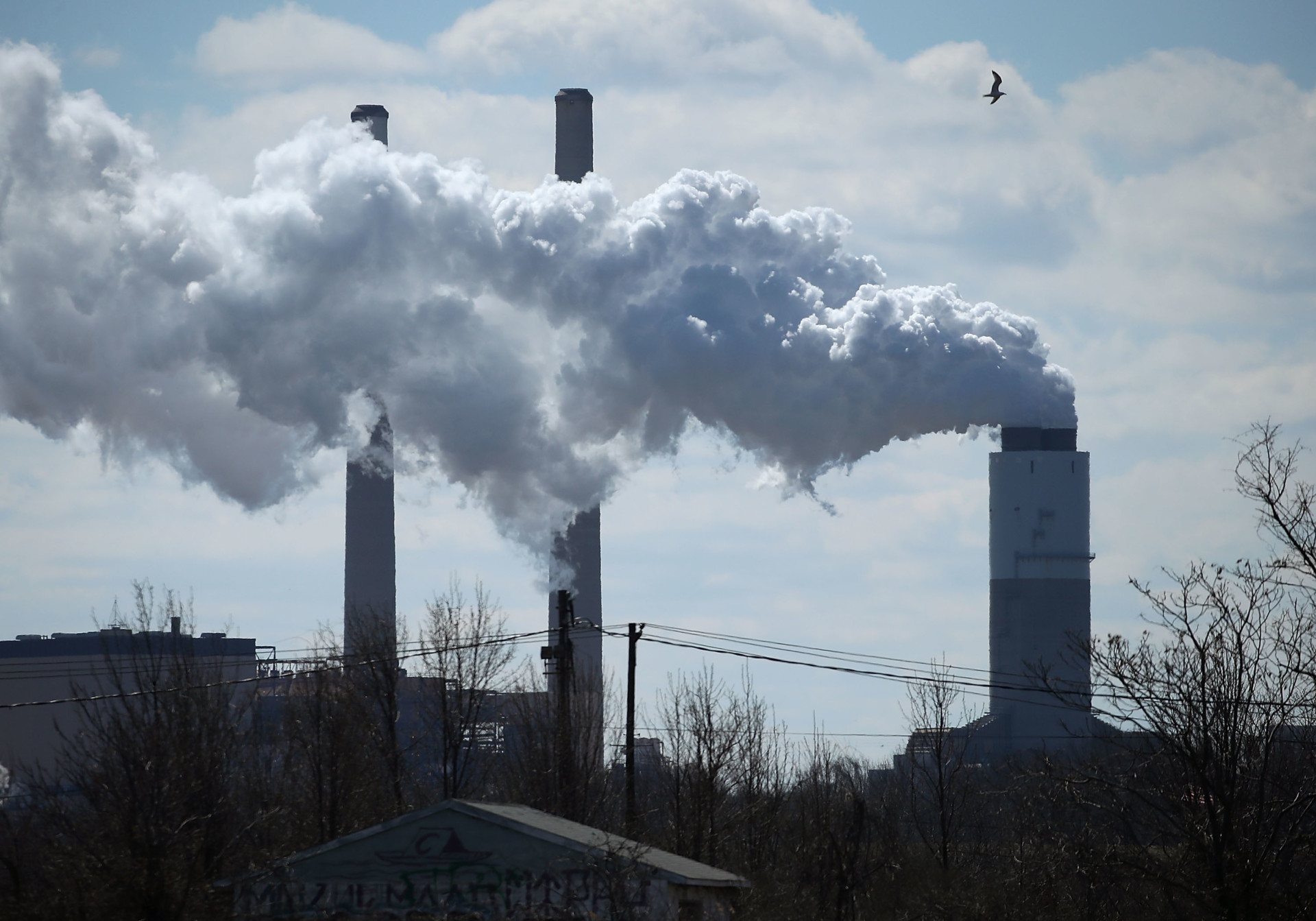 Almost half of registered voters back the Trump administration’s move to replace the landmark climate change-combating rule of the Obama administration with a new regulation that would increase states’ authority to set standards, according to a new poll.

An Aug. 28-31 Morning Consult/Politico survey of a national sample of 1,964 registered voters shows that 48 percent of the population either somewhat or strongly supports the Environmental Protection Agency’s proposed Affordable Clean Energy rule. The new rule would in part provide states with a range of possible technologies to adopt as they set their own emissions strategies for emitting structures such as power plants, replacing the stricter carbon emissions limits placed under the EPA’s 2015 Clean Power Plan.

Forty-six percent of Republicans say they strongly support the proposal, along with an additional 35 percent of GOP voters who somewhat support the initiative. Forty-five percent of independents and 19 percent of Democrats also say they back the proposed rule. The poll has a margin of error of 2 percentage points. 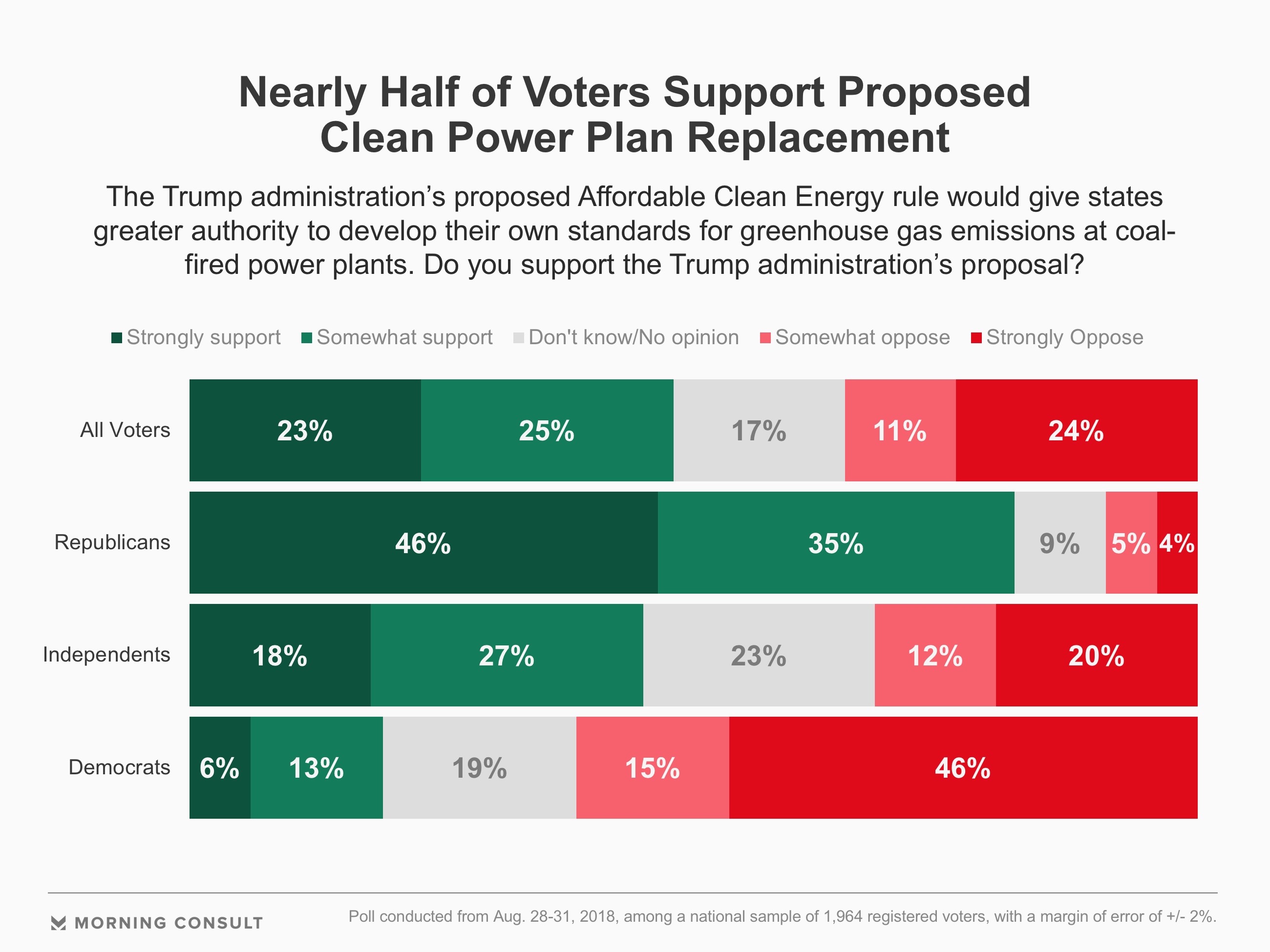 Obama-era agency actions like the Clean Power Plan tipped the scales in favor of alternative energy sources at coal’s expense, but the Affordable Clean Energy proposal is “leveling the playing field, taking the thumb off the scale completely, letting the states decide their regulatory policy with input from the federal government to meet regulations,” Alec Thomas, communications director for Rep. David B. McKinley (R-W.Va.), said in an interview on Aug. 30. McKinley chairs the Congressional Coal Caucus.

The EPA, currently under the direction of acting Administrator Andrew Wheeler, estimates in its analysis of the proposed rule that the regulation could reduce carbon dioxide emissions by as much as 1.5 percent from projected levels without the existing Clean Power Plan.

Forty-five percent of voters said they were more likely to back the proposal knowing about the 1.5 percent emissions decrease, while 1 in 4 voters were unsure or had no opinion. 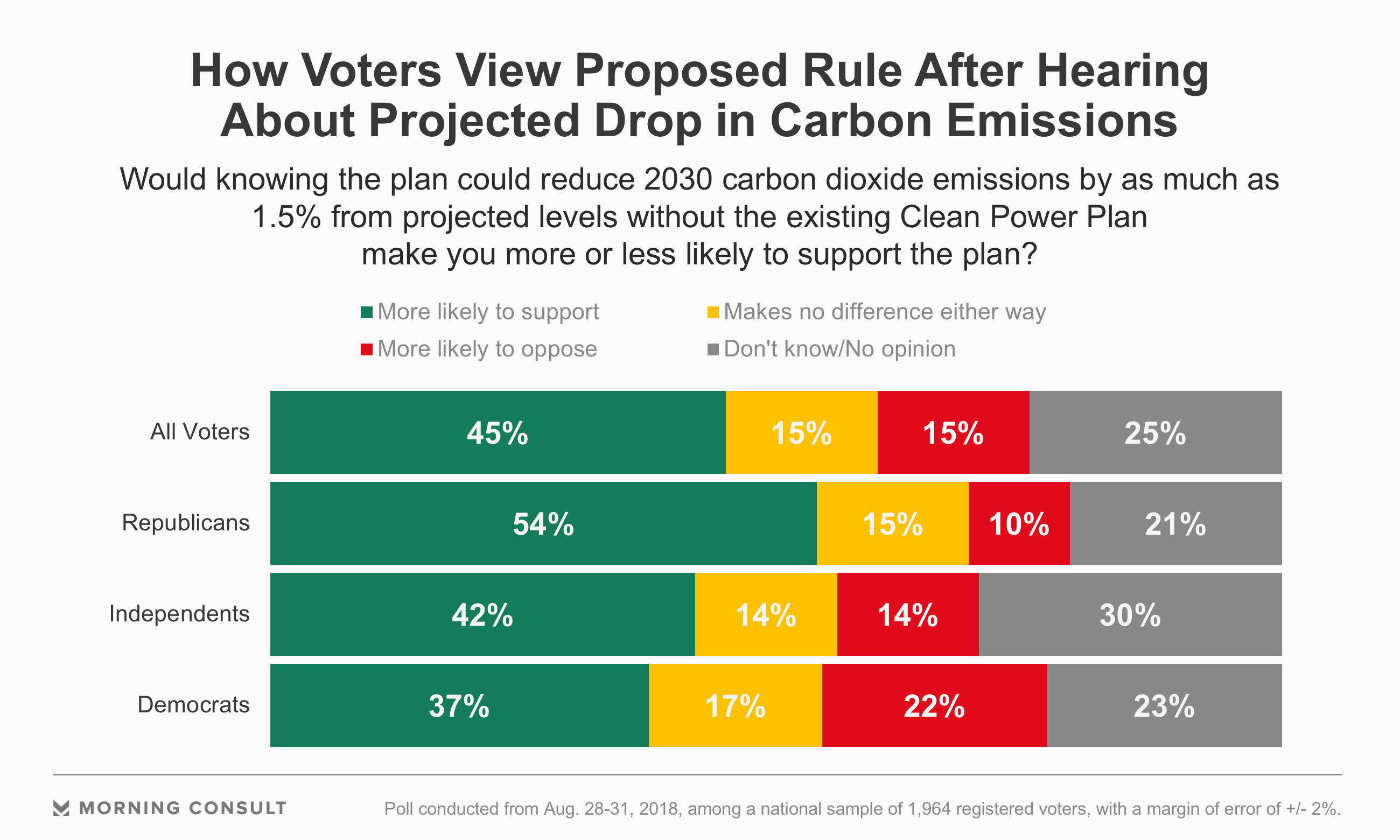 The agency’s analysis also indicates that the rule as proposed could result in up to 1,400 additional annual premature deaths in 2030 from certain particulate emissions. Forty-five percent of survey respondents said knowing this would make them somewhat or much more likely to oppose the plan, while 20 percent said it would make them more likely to support it. 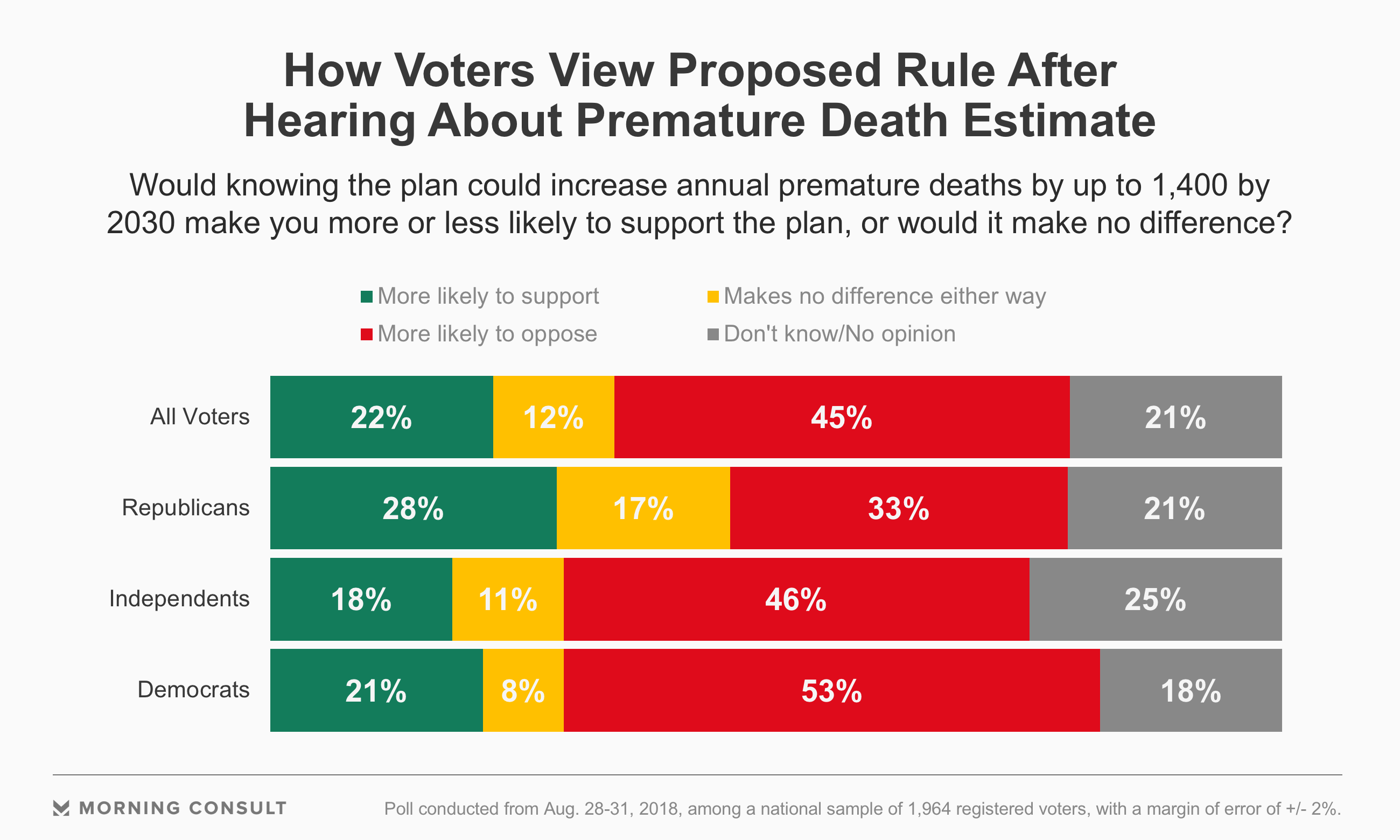 The Affordable Clean Energy proposal remains mostly off voters’ radar: Thirty percent said they had not seen, read or heard much about the proposal, along with 28 percent who had heard nothing at all about it. And while most Republicans support the administration’s action, 64 percent said they had seen little or nothing about it, compared to 59 percent of independents and 51 percent of Democrats.

Ben Longstreth, senior attorney at the Natural Resources Defense Council, said by phone Aug. 30 that when the public understands the administration’s proposal will result in more deaths and health impacts without significantly reducing carbon pollution, the proposal is likely to have low support. “It may take time, given that it’s mistitled the Affordable Clean Energy proposal, for the public to understand that,” he added.

Environmental issues have not escaped the growing partisan divide in the United States. A majority of Republican adults (59 percent) polled from Aug. 10-12 also registered their support for the administration’s proposal to issue more lenient fuel economy and greenhouse gas emissions standards for many cars and trucks, compared to 16 percent of Democrats.