Minimum wage, 'Medicare for all' lead list of issues that would get 18-21 age group to favor a candidate 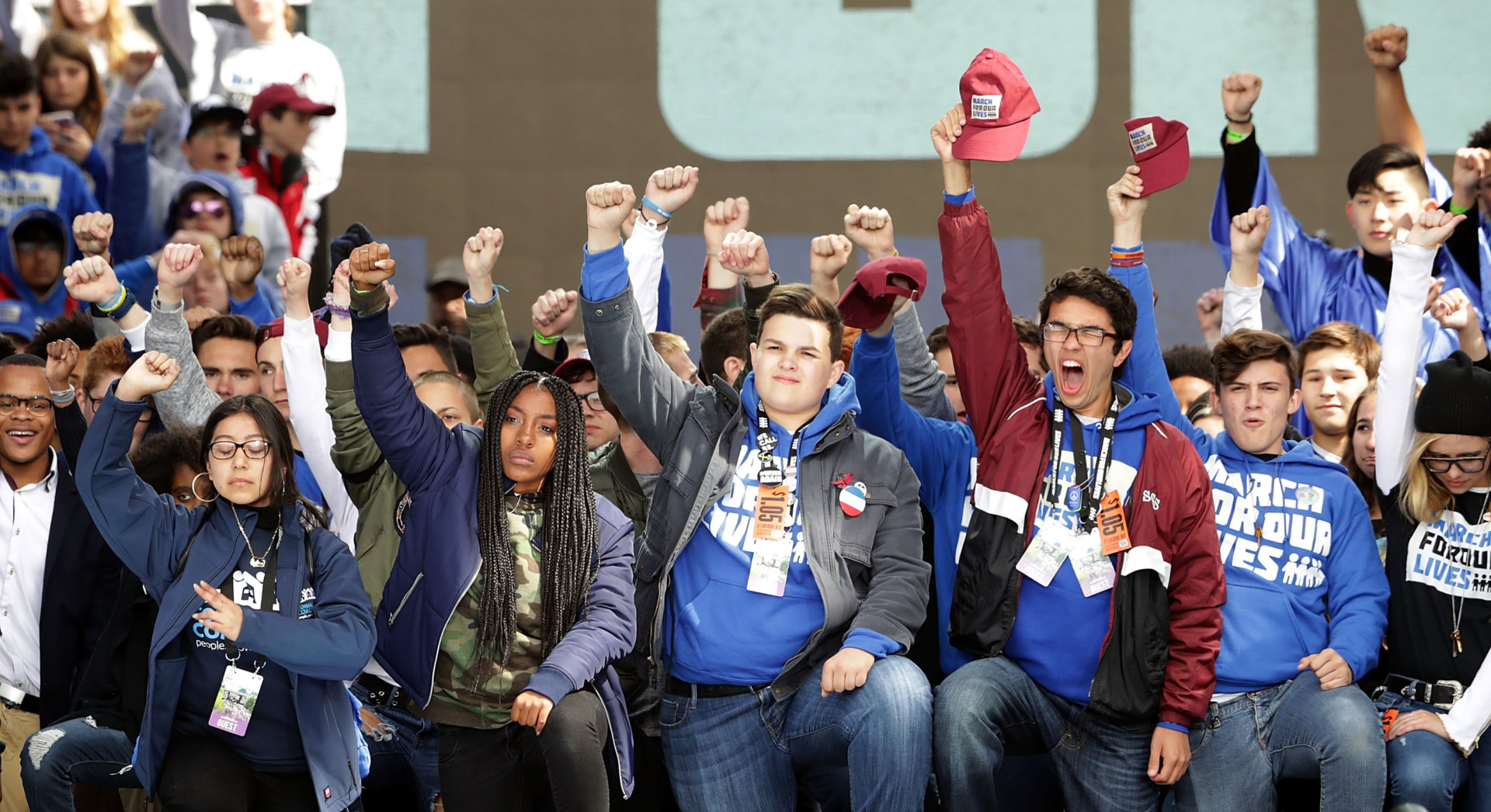 Young victims of gun violence, including students from Marjory Stoneman Douglas High School in Parkland, Fla., stand together on stage at the conclusion of the March for Our Lives rally on March 24 in Washington. (Photo by Chip Somodevilla/Getty Images)
By

After the mass shooting at a high school in Parkland, Fla., in February, advocates for stricter gun control —  including some students from Parkland – hoped to leverage the issue to get young people to vote in the midterm elections.

But Morning Consult polling shows the nation’s youngest voters are less motivated to support a candidate based on the issue of gun control compared to other hot-button topics, which may be better used to get them to show up to the polls this November. 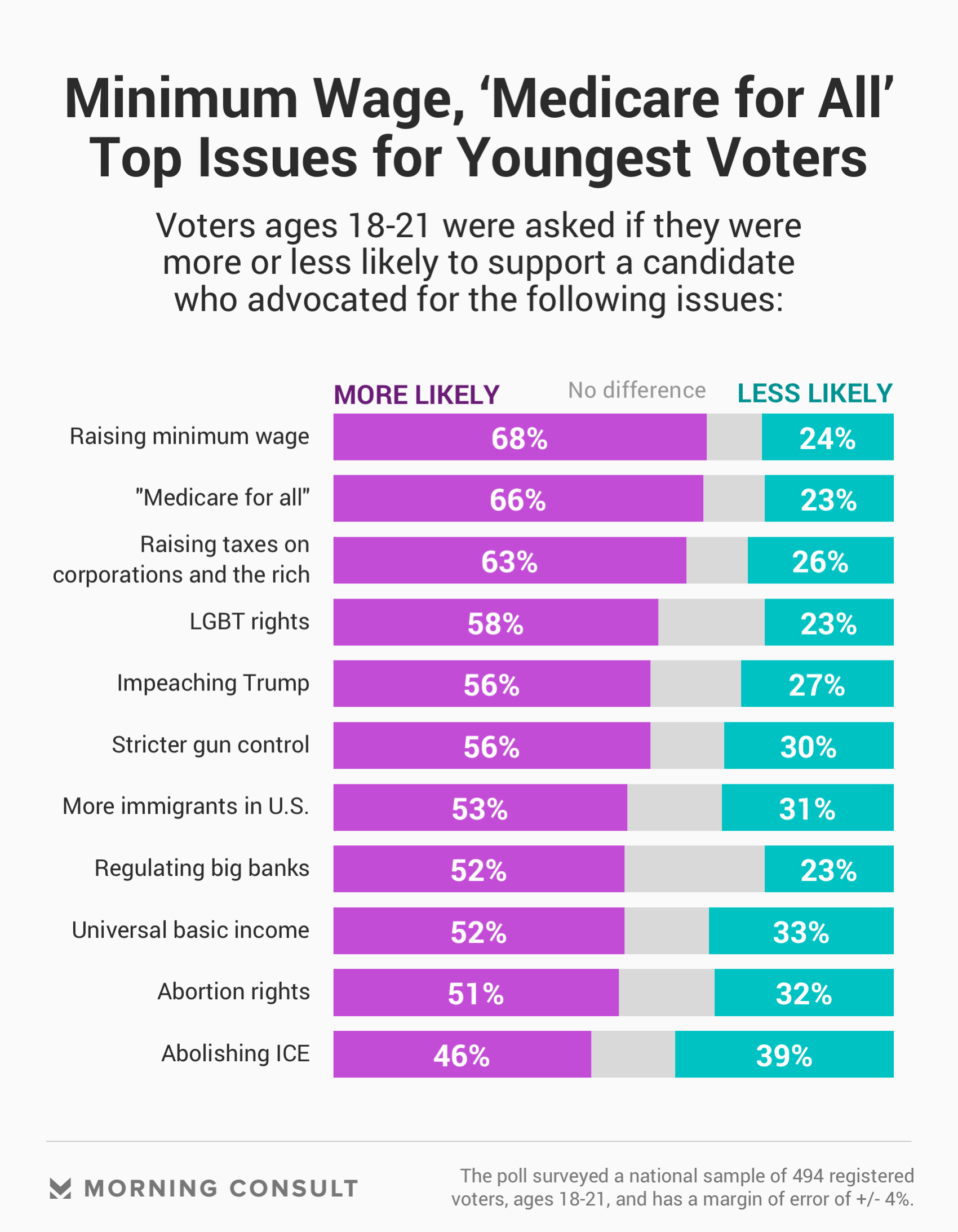 Fifty-six percent of 18- to 21-year-olds say they would be more likely to support a candidate who advocates for stricter gun control laws, ranking the topic below issues such as LGBT rights and raising taxes on corporations. The finding is from a July 14-17 national poll of 12,771 registered voters, which included 494 voters ages 18-21.

Among the 11 issues tested, a candidate’s advocacy for raising the minimum wage to $15-per-hour was the most likely to gain the support of the youngest voters, with 68 percent of them saying the issue made them more likely to back a candidate, along with 66 percent who said the same of “Medicare for all.”

Raising taxes on corporations and the rich also scored high with young voters, with 63 percent saying it would make them more likely to support a candidate. The margin of error for the subsample of young voters was 4 percentage points.

Issues involving health care and income are more familiar to young people, “whereas a school shooting or a gun event – that happens too frequently, but not on an everyday basis,” Benji Backer, a 20-year-old environmental activist from Washington state, said in an interview. Backer founded the American Conservation Coalition, which advocates market-based solutions to address environmental problems.

Rachel Gonzalez, a 19-year-old Democratic activist from Missouri who was one of Hillary Clinton’s youngest delegates at the 2016 Democratic National Convention, said she thinks gun control is less motivating for young voters like her because they don’t expect Congress to act on the issue.

She said “new ideas” — such as universal health care, also known as “Medicare for all” — “are simply more exciting.”

After the Parkland shooting, young people contributed to an effort to pass stronger gun laws in states such as Vermont and Florida. The shooting also inspired the March for Our Lives movement, an effort that began with a march on Washington, D.C., in March and has since sought to register young people to vote ahead of the midterms. The group did not comment for this story.

Morning Consult polling shows support for stricter gun control measures reached 44 percent of voters in the days after the Parkland shooting, compared to 38 percent who said the issue should be a “top” priority in the most recent poll, conducted Sept. 20-23.

The biggest gaps between the oldest and youngest voters were on the issues of a candidate’s support for a universal basic income (52 percent of the youngest adults backed it, while 63 percent of senior citizens opposed it), and support for more immigrants coming into the United States (53 percent of young people supported it while 60 percent of older voters were opposed).

Young people’s voting motivation has long been up for debate, given the low electoral participation among the age group. According to a U.S. Census Bureau survey on voters in the November 2016 presidential election, 52 percent of voters 18-21 were registered to vote, and just 40 percent did. That’s compared to the 78 percent of voters 65 and older who were registered, 71 percent of whom said they actually showed up to the polls.

Backer said young people need to understand that being involved in politics is about more than just speaking up.

“Young people think that protesting and campaigning and yelling on social media is enough,” he said, but in reality most politicians only ”care about who votes for them.”