As Esports Grows Up, So Does Its Advertising

Members of Team Liquid surround captain Kuro Takhasomi as they plan their strategy before their match against PSG.LGD on Day 3 of The International 2018 Dota 2 Championships at Rogers Arena on August 22, 2018 in Vancouver, Canada. (Photo by Jeff Vinnick/Getty Images)
By Joanna Piacenza

As esports moves into the mainstream, advertisers in traditional formats may find it easier to enter the space.

In the past, the usual marketing in electronic sports or competitive video gaming had to adjust to the field’s more casual, chaotic energy. Common approaches involved native advertising, such as esports players who donned branded headsets or gave a brand a casual mention during livestreams, or fans who watched brands make fun of themselves, such as when Arby’s blew up one of its sandwiches in a 30-second clip from 2016.

Industry observers say this sort of tongue-in-cheek marketing is still very prevalent and will continue to succeed. But brands can now find more traditional advertising opportunities that make esports look and feel like just another athletic event, especially for non-endemic brands, or brands with products or services that don’t directly relate to esports.

Pre-roll ads, common on unpaid versions of streaming memberships — or on television — are becoming the norm for esports viewers. And with at least five esports arenas opening in the last year, or announcing plans to open , brands can advertise in stadiums and tuck free samples into tournament swag bags.

“It’s really no different than traditional sports,” Dan Ciccone, co-founder and managing director of the esports marketing and talent management agency REV/XP, said about how his company advises brands on advertising in esports. 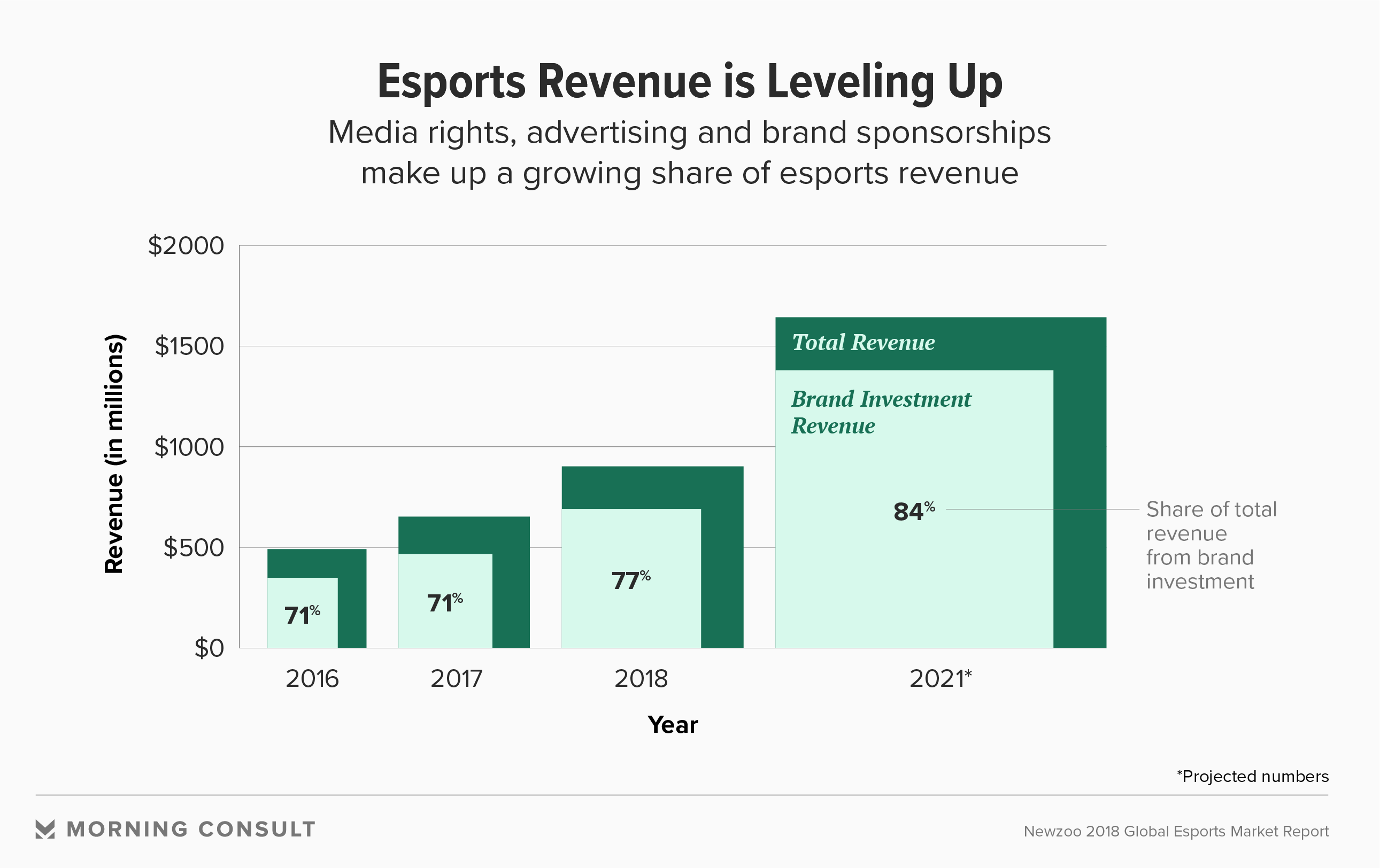 This year, esports will bring in $906 million in revenue globally, according to market intelligence agency Newzoo. Many brands are already in the space: Seventy-seven percent of that revenue comes from media rights, advertising and brand sponsorships. Energy drink maker Red Bull, for example, has its own Twitter and Facebook feeds dedicated to esports and sponsors a number of tournaments and players.

Now more advertisers are trying to figure out how to enter the industry. Esports is the theme of several panels at this year’s Advertising Week, a gathering that brings together 98,000 advertising professionals in New York Oct. 1-4.

Brands’ go-to approach for the past few years has been sponsoring individual esports players or content creators, said Simon Bennett, vice president of marketing for Infinite Esports & Entertainment, a holdings company in the industry.

Such advertising is seen as more authentic compared to banner ads or even sponsorships, he said, as brands get a nod from a person fans know and trust. That’s important for the esports audience, which is hyper-aware and very sensitive to advertising.

But traditional ads are something esports fans may well have to get used to.

Twitch, the largest streaming platform for esports, announced in August that it will no longer include ad-free viewing in its Twitch Prime membership. Experts said in interviews last month that this will eventually make advertising normal during viewing and gives advertisers the chance to speak directly to more hardcore esports fans. YouTube’s gaming microsite already features advertisements before livestreams. 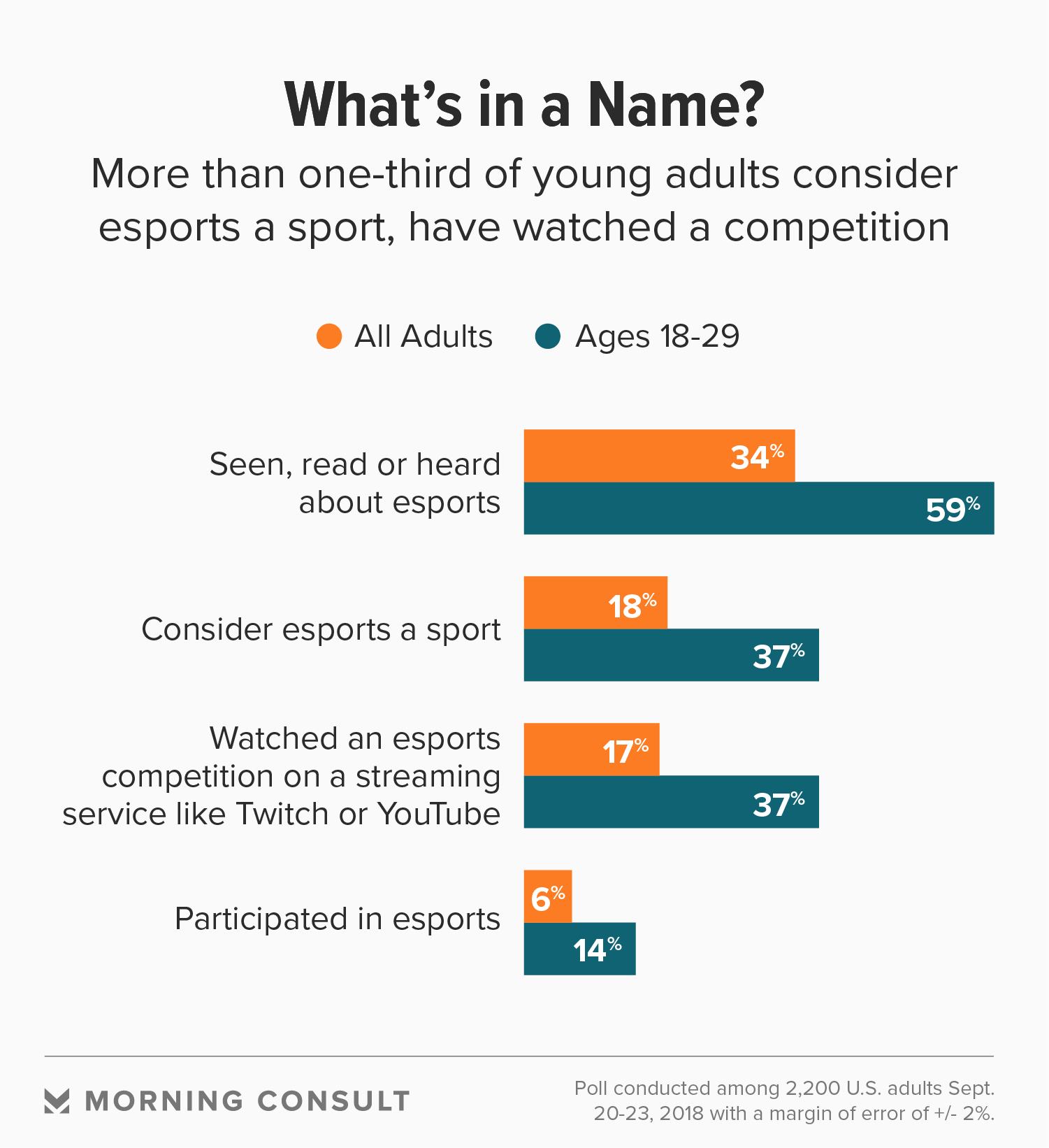 Traditional ads also allow brands to avoid some of the issues with sponsoring individual esports athletes.

Popular esports player Felix Kjellberg, known as PewDiePie, posted several video clips with anti-Semitic messages throughout 2016 and 2017. Walt Disney Co. severed ties with Kjellberg, who still holds the title of most subscribers on YouTube at 66.6 million, after The Wall Street Journal inquired about the clips.

Such individual sponsorships became common among esports athletes who were paid little, if at all, by league teams and received only small cash prizes for tournament wins. For example, the average prize pool for paid 2013 “Call of Duty: Ghosts” tournaments was $23,827 — a total usually divided among team members, according to E-Sports Earnings.

But both salaries and prize money are increasing, Ciccone said in an interview last month. Prize pools jumped 70 percent to $61 million from 2014 to 2015, the most recent year available, according to Newzoo.

While experts said brands will continue to sponsor individual players, more firms are likely to sponsor entire teams or leagues, similar to Nike Inc.’s sponsorship deal with the National Football League, as tournaments continue to grow in popularity.

And as esports arenas open around the country, including in Las Vegas and Oakland, Calif., so do new opportunities for stadium advertising.

Esports is set to bring in $1.65 billion in revenue in 2021, an increase of 27 percent from 2016, according to Newzoo forecasts. Audiences in the Americas make up a disproportionate amount of that spending: While they accounted for about a quarter of esports’ global audience in 2017, they made up 40 percent of global revenues in the industry that year.

But simply in terms of popularity — and potential market — esports still has a long way to go compared to other sporting leagues. The average esports fan will spend $6 in 2019, according to Newzoo — less than a third of the spending of an average National Basketball Association ($20) or NFL ($60) fan.

And a Sept. 20-23 Morning Consult survey showed that 83 percent of Americans don’t think esports is a sport or weren’t sure. But interest may be growing: Seventeen percent of those surveyed reported watching an esports tournament, and that number rose to 37 percent among the youngest adults (ages 18-29).

“At the end of the day, people watch sports because it’s entertaining,” Ciccone said, and the same is true for esports.