In Departure From Past Elections, Seniors Lean Toward Democrats

Last week, President Donald Trump published an op-ed in USA Today titled “Democrats ‘Medicare for All’ plan will demolish promises to seniors,” drawing attention to the midterm battle at the convergence of health policy and a key bloc of extremely motivated voters: seniors.

The president’s column may also shed light on concern among Republicans about losing their status as advocates for older Americans: an Oct. 11-14 Morning Consult/Politico survey finds Democrats hold a 19-point advantage over Republicans among the group of voters who prioritize seniors’ issues such as Medicare and Social Security.

Seniors’ issue voters, the majority of whom are over 65, retired and white, are among the most motivated voters heading into a decisive midterm election in which health care promises to be a leading issue.

Less than three weeks before polls open, seniors’ issues are the second only to the economy as a priority among all voters. Seventeen percent of survey respondents said Medicare and Social Security are at the forefront of their mind ahead of the election, higher than the 16 percent who selected health care issues. The poll has a margin of error of 2 percentage points.

Related: Two-Thirds of Energy Voters More Likely to Vote for a Democrat for Congress

When asked how they would cast their ballot, 52 percent of seniors’ issue voters prefer a Democrat while 33 percent say they would vote for the GOP candidate — a change for the Republican Party, which has been able to rely on support from the senior bloc for nearly two decades. Per The New York Times’ exit polls, at least a plurality of seniors have backed Republicans in all presidential elections since 2000.

Experts say it comes as no surprise that Republicans, who have been on the defense about health care policy and pre-existing conditions protections for months, are working overtime to shift the narrative toward universal health care and send the message that a vote for Democrats is a vote against one of seniors’ most beloved government programs: Medicare.

Seniors are an influential voting bloc — in the last presidential election, older voters had a turnout rate of 71 percent, higher than any other age group; the same pattern has held true for most midterms since at least 1986, according to the U.S. Census.

Seniors are “an age group that tends to skew traditional Republican because they also tend to skew toward organized religion, and tend to have conservative spending habits,” said Joseph Antos, a health care and retirement policy analyst at the American Enterprise Institute. Antos attributed the change to “the apparent social policies — or at least the noise about social policies.”

In 2016, 53 percent of seniors voted for President Donald Trump, who campaigned heavily on reducing prescription drug prices and protecting Medicare. 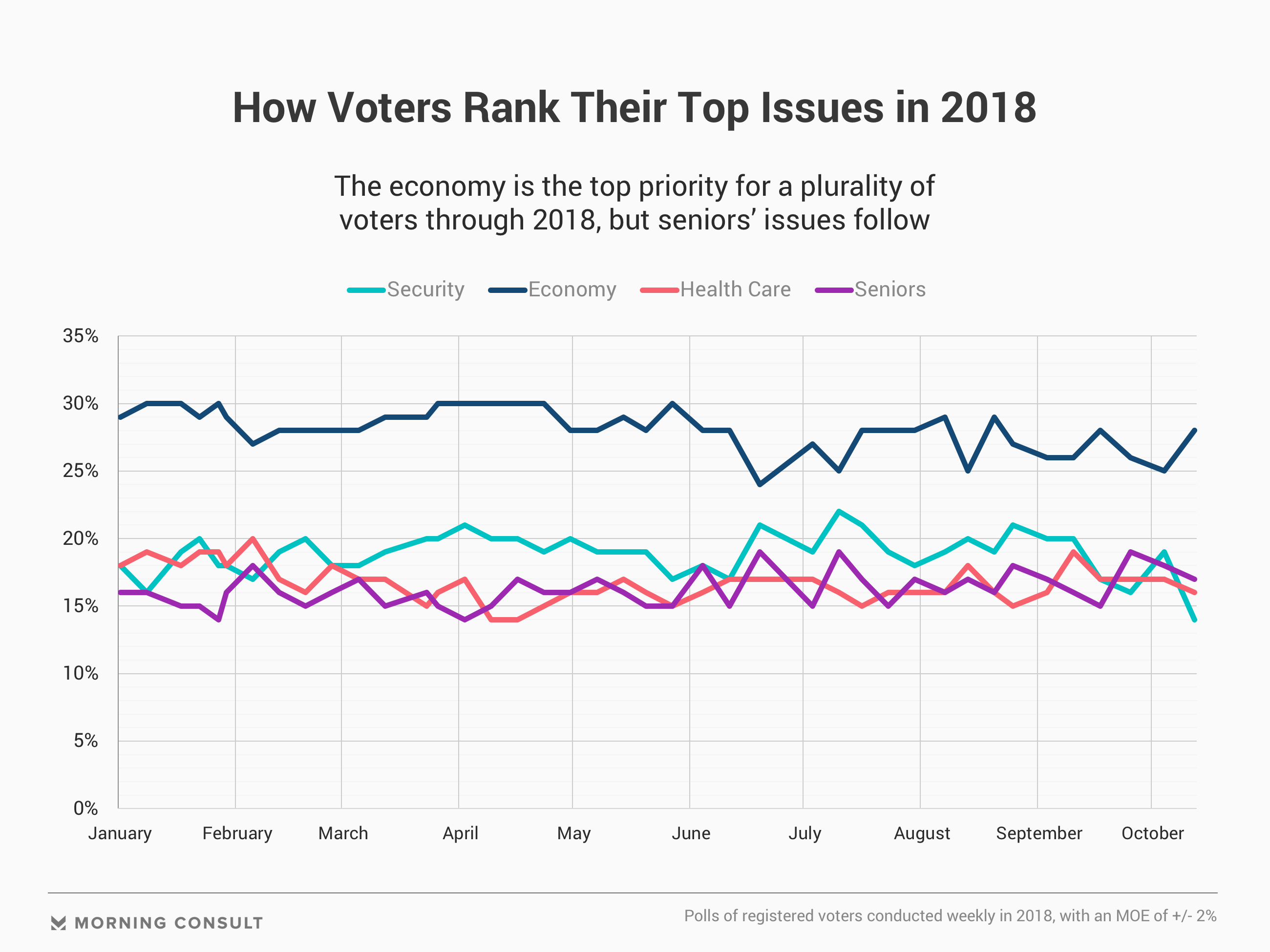 But an analysis from the Associated Press found that during the first seven months of 2018, every price cut on prescription drugs was matched by 96 price hikes. In a separate Oct. 7 Morning Consult/Politico poll of 2,189 registered voters, 59 percent of seniors’ issues voters disagreed that the Trump administration is doing its best to improve the U.S. health care system, while 57 percent said the Obama administration did its best on the issue.

And Medicare-for-all, once seen as a far-left fringe idea, has garnered support among Medicare proponents: According to the July poll, 68 percent of voters who prioritize seniors’ issues are more likely to favor a candidate who backs Medicare-for-all.

David Lipschutz, a senior policy attorney at the Center for Medicare Advocacy, said that’s because despite barriers and concerns, the program is “beloved” — recipients think it works well and would like others to be able to participate. Although the center has not endorsed any specific proposal, it supports universal health coverage and believes it would be beneficial for current Medicare beneficiaries, he said.

But some experts who oppose Medicare-for-all believe Democrats campaigning on the policy will ultimately alienate seniors.

They say the slogan does well with older voters initially, until they understand how some current proposals, such as Sen. Bernie Sanders’ (D-Vt.) plan and the proposal from the House, would alter the current Medicare program and eliminate private health insurance — including the popular Medicare Advantage plans.

Bob Moffit, a senior fellow at the Heritage Foundation’s Center for Health Policy Studies, laid out one of the main GOP arguments against the plan, saying “Medicare-for-all” would eliminate consumers’ ability to choose, and generate intense competition for federal money.

“A lot of seniors do not understand that, and to the extent to which they start to understand it, they will find a lot of this to be very troublesome,” Moffit said. He cited Colorado as an example of a state which rejected a ballot initiative for single-payer plans, despite a Democratic majority in the House and initial shows of support.

Recent Republican campaign messaging has framed Democrats as the purveyors of a universal health care system that endangers coverage for seniors.

In an op-ed for The Wichita Eagle, Rep. Ron Estes (R-Kan.) warned that Medicare-for-all would strip seniors of their health care security, forcing them to “compete with the entire population” for coverage despite paying into Medicare for their entire lives.

An ad from the GOP leadership-aligned Congressional Leadership Fund targeting Democrat Anthony Brindisi, who is opposing Rep. Claudia Tenney in New York’s 22nd District, opens with a woman declaring, “I earned my Medicare and Social Security benefits and I want Washington to keep their hands off them. That’s why I can’t support Anthony Brindisi.”

But polling shows that voters who care about seniors’ issues are skeptical of the GOP protecting current Medicare benefits and address other key issues, such as the rising costs of prescription drugs.

Fifty-four percent of seniors’ issue voters said Democrats are more likely to protect Medicare benefits — nearly double the 28 percent who said the same about Republicans, according to the Oct. 7 poll.

That support for Democrats regarding Medicare could be tied to increasing disenchantment with the GOP repeal-and-replace agenda regarding the Affordable Care Act, which would have “significant financial implications” for the program, Lipschutz said.

“The more people know about the ACA and what it has done for the Medicare program, the more concerned they are about repeal,” he said, pointing to successes such as expanded coverage of preventive care in Medicare and closing the “donut hole” that made some poorer seniors ineligible for subsidized prescription drugs. “And the people who are pre-Medicare, the 55-65 population, would have a lot of their protections taken away.”

Further, according to Lipschutz, some opponents of Medicare-for-all who are “trying to engage in scare tactics” have supported legislation that would erode the program, such as proposals to cut billions from Medicare, raise the age of eligibility and convert Medicare into a premium support or voucher program.

But these policy proposals are highly unlikely to advance, Antos said.

“Trump said he didn’t want to touch Medicare. It may be because of lots of reasons, but the most obvious is seniors vote,” Antos said. 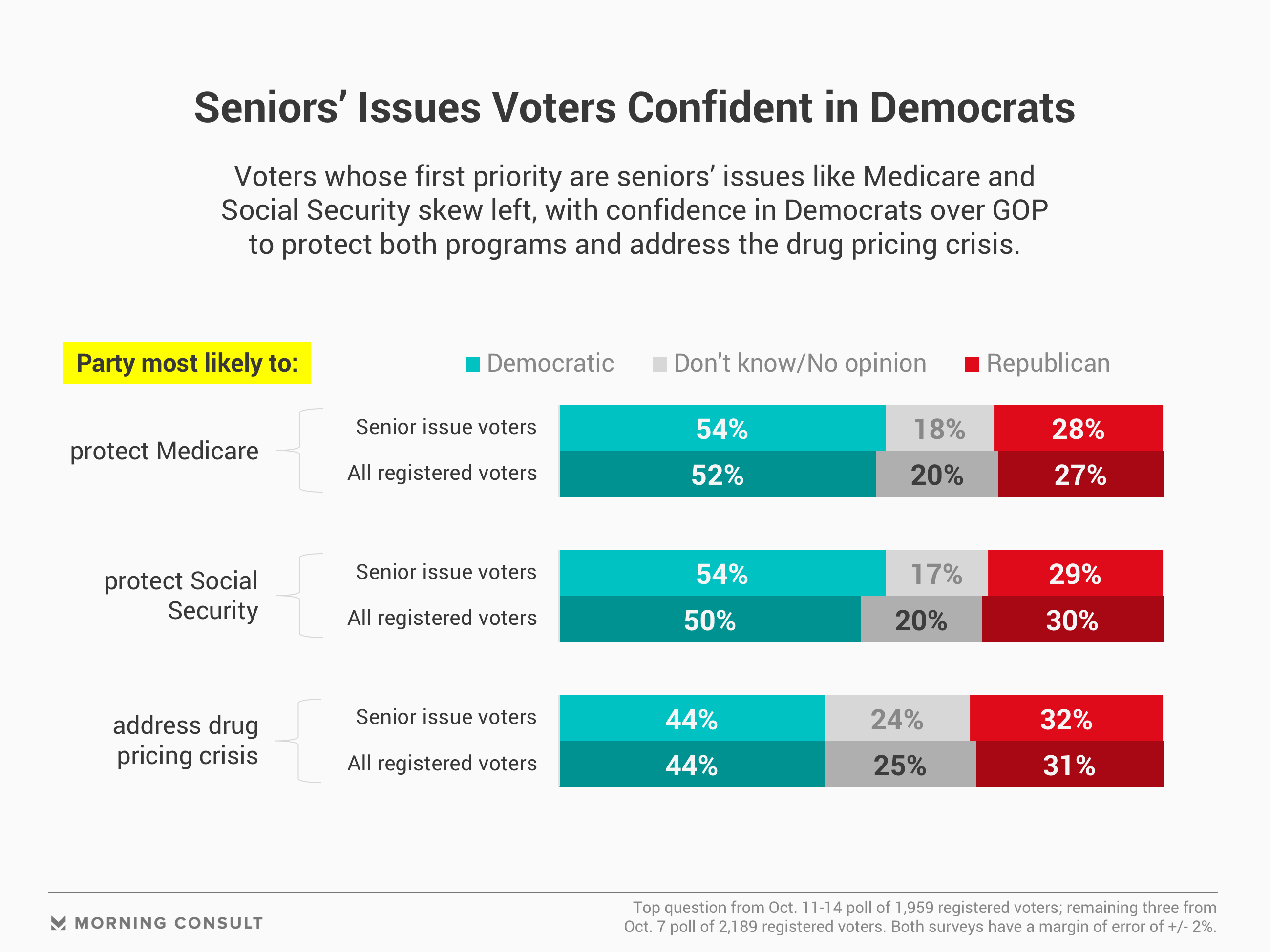 Protecting the security of Medicare is not the only driver for seniors. The drug pricing crisis is a tremendous motivator: Seniors take a lot of prescription drugs and when their copay spikes, they notice.

On drug pricing, the Oct. 7 poll shows Democrats enjoy a 12-point lead over Republicans, with 44 percent of seniors’ issue voters saying they believe Democrats are more likely to address the rising cost of prescription drugs compared to 32 percent who say Republicans are more likely.

Prices have not fallen despite the Trump administration’s vow to take a stronger stance against the pharmaceutical industry, which may have contributed to frustration among seniors’ issue voters that Republicans could not live up to their promises, experts say. According to Antos, if there was a Democrat in the White House and drug prices were rising, seniors might be gravitating toward the right.

“It’s a disadvantage to the incumbent party,” Antos said. “People just want you to fix it — they don’t care who does it.”