It Keeps Getting Harder for Republicans to Separate From Trump

Less than three weeks before the midterm elections, voters across the country are finding it harder than ever to distinguish President Donald Trump from other Republicans in Washington.

In the latest Morning Consult/Politico poll — conducted Oct. 11-14 among 1,959 registered voters — 56 percent of respondents said Trump represents the majority viewpoint of Washington Republicans. That is 13 percentage points higher than a similar poll conducted in April, and up 23 points since August 2017. All three surveys had 2-point margin of error. 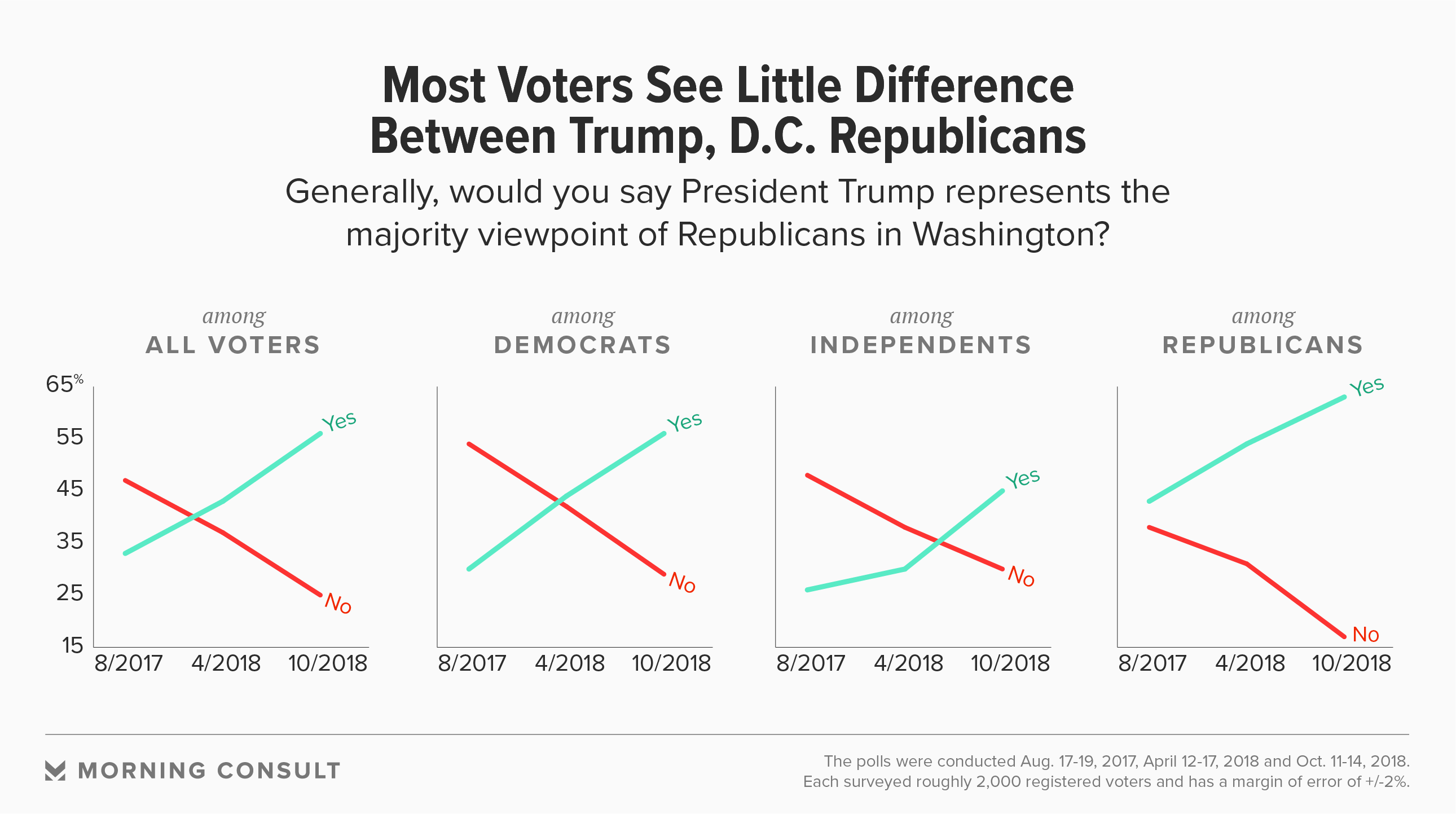 Together, it marks a net 45-point swing toward Trump as the face of the GOP in D.C., since Morning Consult first asked the question eight months into his first term as president. The trend polling shows Democrats, Republicans and independents all growing more likely to say Republicans in Washington are reflective of their party’s standard bearer.

“When you have so few Republicans on the Hill publicly challenging President Trump, it’s not a surprise that people start believing that he represents the broader view of the Republican Party,” Nathan Gonzales, a veteran political handicapper who edits and publishes the nonpartisan website Inside Elections, said in an email Tuesday.

Midterm elections tend to serve as a referendum on the party in power. In 18 of the past 20 midterm elections, the president’s party has lost an average of 33 House seats, according to the Brookings Institution. And the two midterm cycles that bucked that trend, in 1998 and 2002, featured presidents who were popular on Election Day. Historical data from Gallup shows Presidents George W. Bush and Bill Clinton with approval ratings in the mid-60s around the time voters cast their ballots during those years.

On the campaign trail, Democratic challengers have sought to capitalize on the president’s unpopularity. In one of the aforementioned toss-up districts — Virginia’s 10th — Democratic candidate Jennifer Wexton has used an ad to brand vulnerable Republican Rep. Barbara Comstock, “Barbara Trumpstock.”

Jesse Hunt, a spokesman for the National Republican Congressional Committee, said Tuesday that Republican candidates “are running localized races, talking about issues that are important to their districts.”

But Eric Ostermeier, a research fellow at the University of Minnesota’s Center for the Study of Politics and Governance and writer of the nonpartisan website Smart Politics, said those local issues are likely to be overshadowed, and the president’s popularity on Election Day — or lack thereof — will have an outsized influence on election returns for both parties.

“In determining vote choice for their member of Congress, not only will local issues take a back seat to how the electorate feels about the president, but so too will many of the candidates themselves,” he said in an email Tuesday.

But it’s not all bad news for Republicans. As GOP voters grew more likely — from 54 percent to 63 percent — to link their elected representatives in Washington with Trump, he is still popular with the base, with 76 percent approving of his job performance.