Why Democrats Are Running on Health Care 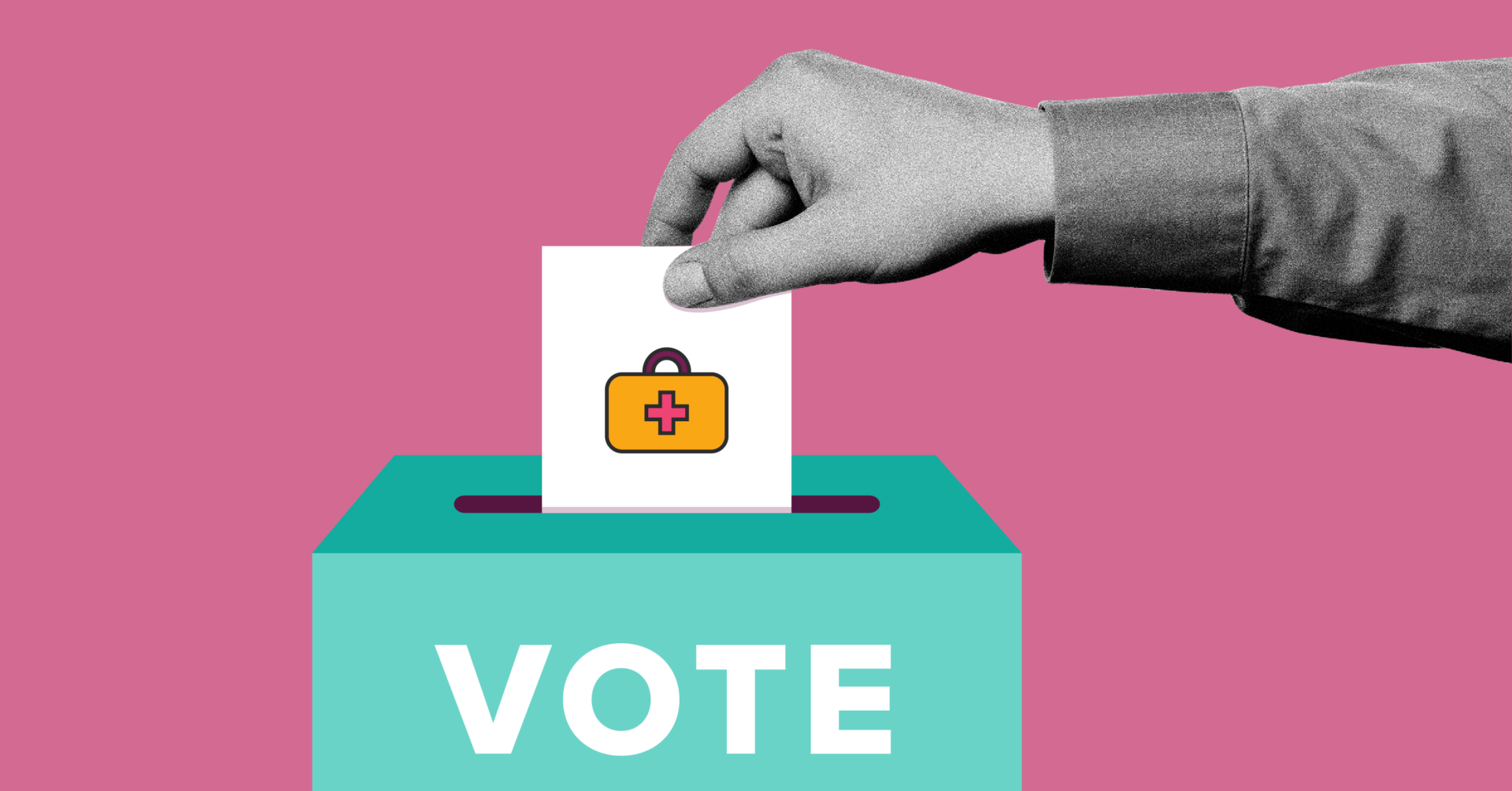 With less than three weeks remaining before the decisive midterm elections, Democrats have discovered a possible antidote for their most at-risk congressional seats across the nation: campaigning on health care.

And the strategy is paying off: Voters who say health care is their top priority favor Democrats over Republicans by a margin of 28 points.

Reminiscent of previous midterm elections, health care has cemented its place at the center of the dialogue, with candidates grappling over protections for pre-existing conditions, universal health coverage and Medicaid expansion. Legislation to reform health care consistently ranks as the top issue that both Democrats and Republicans want Congress to prioritize, with 57 percent of voters from each party selecting it in a Oct. 11-14 Morning Consult/Politico survey.

The poll of 1,959 registered voters also finds health care is the third–highest priority for the electorate, after the economy and security. Sixteen percent say health care is their top issue as they cast their vote, giving this bloc a noteworthy role in determining whether Republicans retain House and Senate majorities come Nov. 6.

Fifty-four percent of health care voters favor Democratic candidates, compared with 26 percent who would vote Republican — wider than Democrats’ generic ballot margin among voters overall. The poll has a margin of error of 2 percentage points.

Democratic women are the backbone of the bloc, making up a 27 percent plurality of health care voters — more than the share of Republican men and women combined. 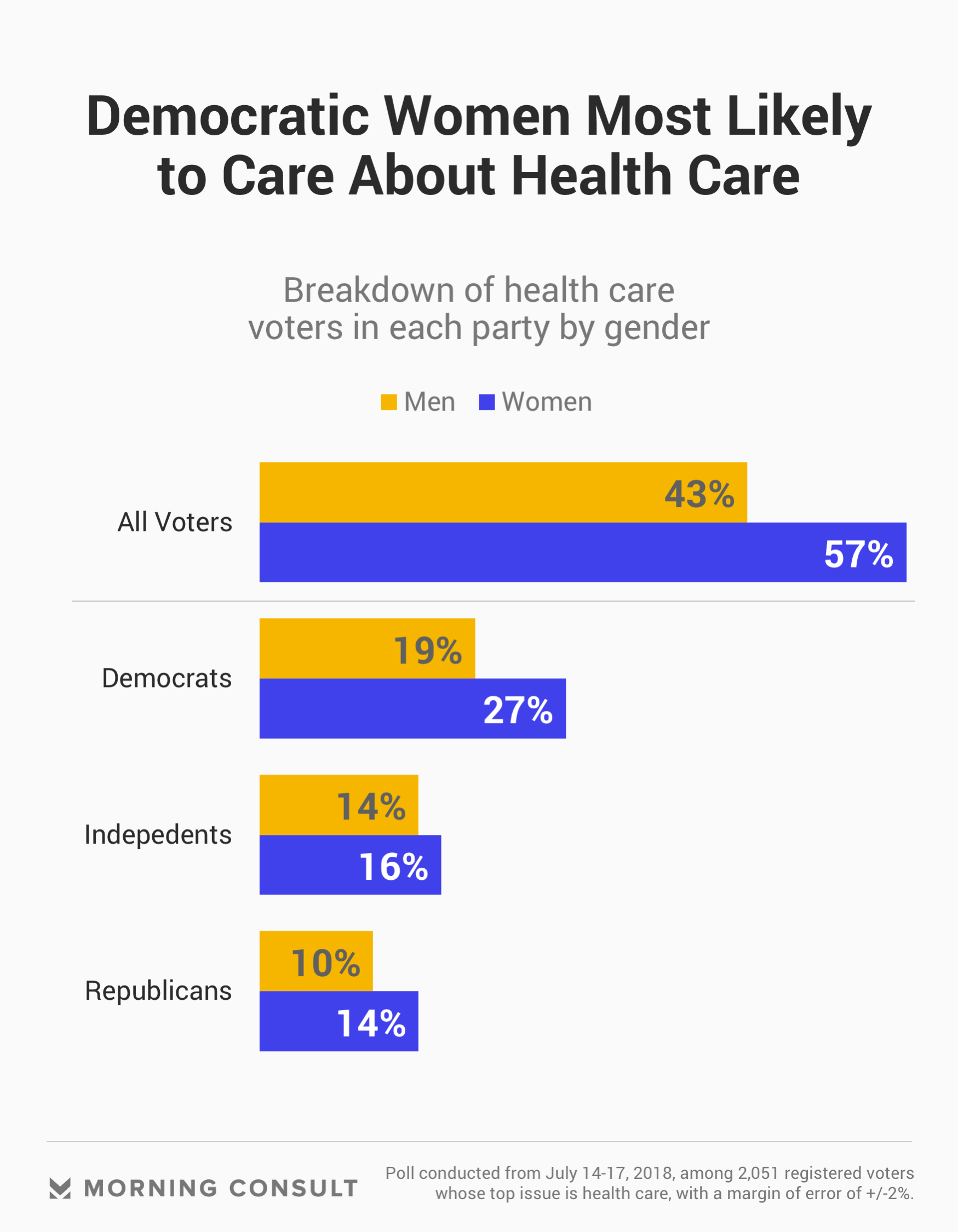 Since 2010, Republicans running for office have energized their base with fervent calls for repealing and replacing the Affordable Care Act — but efforts to do so have been unsuccessful despite the party’s congressional majorities. Now, Democrats are forcing vulnerable Republicans to answer for their party’s perceived attacks on health care and patients with pre-existing health conditions.

Kevin Madden, political analyst and former spokesman for Mitt Romney’s 2012 presidential campaign, said support among the base for GOP candidates has declined on the health care issue because the Republican Party has failed to deliver on their promise to repeal Obamacare, which voters were “promised in one campaign after the next.”

“Republicans need to, on a much more fundamental level, demonstrate they care about reforming the system to make it more patient-centric, instead of talking about the ‘marketplace,’” Madden said in an email.

In late August, 60 percent of Republican voters supported complete repeal of Obamacare. But as Democrats have zeroed in on of the ACA’s most popular provisions, protections for pre-existing conditions, that figure has dropped 11 points to 49 percent in a separate Oct. 11-15 poll.

Related: In Departure From Past Elections, Seniors Lean Toward Democrats

Upholding the ACA provision that prohibits insurance companies from denying coverage for people with pre-existing health conditions is something Democrats have seized as ammunition for their campaigns.

A lawsuit backed by 20 Republican lawmakers aiming to repeal the ACA has put the GOP on the defense over protections for pre-existing conditions, as they would be struck down if the lawsuit is successful.Democrats now have an 18 point advantage on the issue over Republicans, according to the Oct. 11-15 poll.

Short-term health insurance plans championed by the Trump administration would permit insurers to revoke these protections. Last week, Senate Republicans blocked Democrat-led legislation to limit the expansion of these so-called “junk plans” in a 50-50 vote, with Maine Sen. Susan Collins casting the sole GOP ballot in favor of the measure. The legislation was widely seen as a way for Democrats to put Republicans on the record regarding the issue, as it was unlikely to pass the GOP-controlled House.

The most recent survey found the share of Republican voters who trust the GOP to protect patients with pre-existing conditions has fallen to 39 percent, a 13 point decline from Morning Consult/Politico data in early September.

“In some races, particularly in states with less affluent rural voters who benefited from protections on the issue of pre-existing conditions, the potential is there for voters to care less about the R or D after the candidate’s name and more about the promise of future protections,” Madden said. 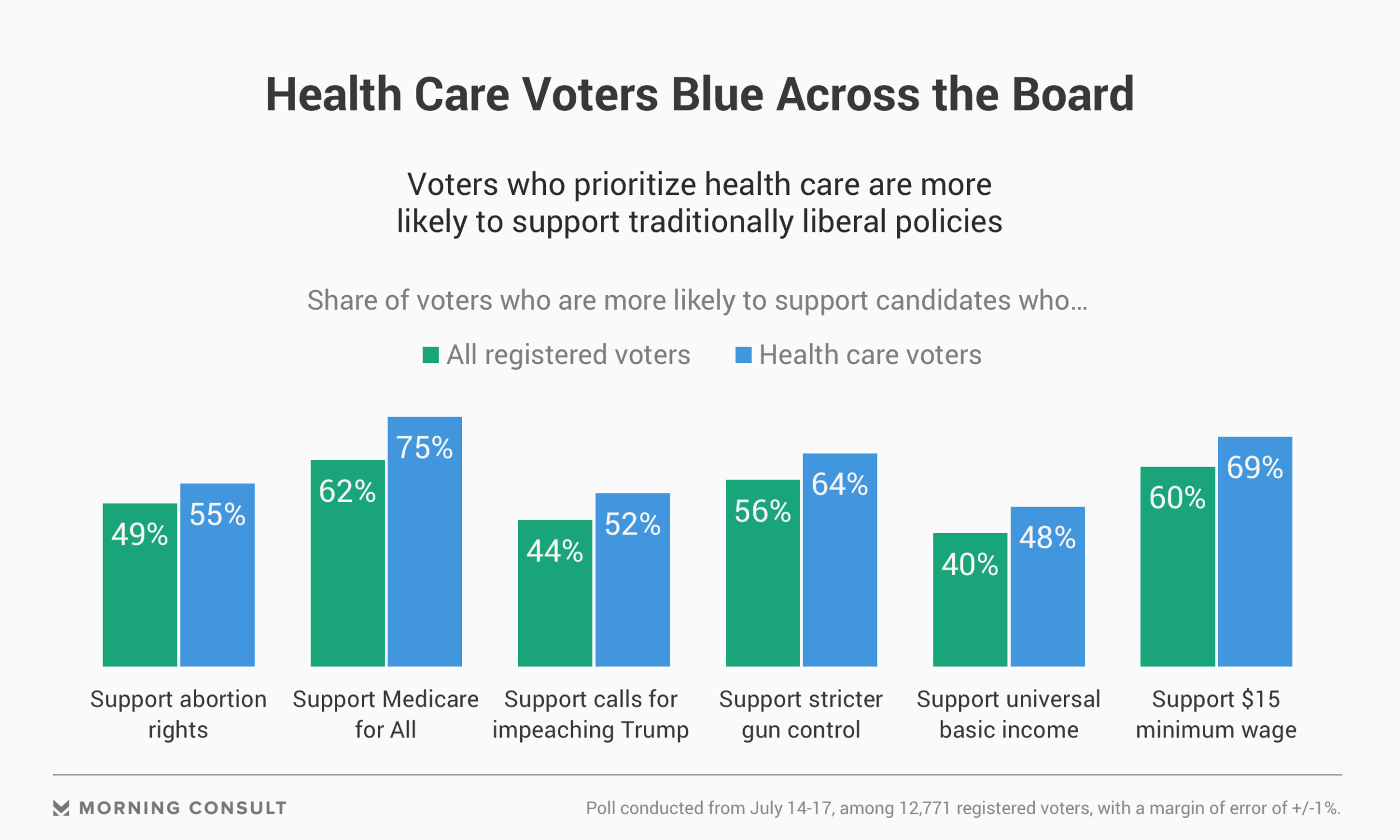 Health care has dominated the rhetoric in some of the closest midterm contests in the country, including tight Senate races in Missouri and West Virginia, where Democratic incumbents Claire McCaskill and Joe Manchin are highlighting their support for pre-existing condition protections rather than outright defending Obamacare. Their GOP opponents, Attorneys General Josh Hawley and Patrick Morrisey, respectively, have also expressed support for the provisions while backing the anti-ACA lawsuit.

According to Avik Roy, political analyst and co-founder of the Foundation for Research on Equal Opportunity think tank, GOP candidates in tough elections should unambiguously support policies that guarantee coverage for Americans with pre-existing conditions — and can do so without defending the ACA.

As Republicans struggle to present a convincing message on protections for pre-existing conditions, they have begun flipping the narrative toward Medicare-for-all, putting Democrats on the defensive about the tremendous cost of a single-payer health system and its implications for Medicare beneficiaries.

But polling shows health care issue voters on the right side of the aisle are more likely to support candidates backing universal health care.

Medicaid expansion under the ACA also has growing support in red states, including Utah, Montana, Idaho and Nebraska, where The Fairness Project is leading ballot initiatives to put the question to voters.

Seventy-three percent of voters support funding Medicaid expansion in Montana with a tax on tobacco products, per the Oct. 11-15 survey.

The support for Medicaid expansion in dark red states sends a very clear signal about where voters — especially Republican voters — stand, according to The Fairness Project’s executive director, Jonathan Schleifer.

“When it comes to health care, the biggest gap isn’t between Republicans and Democrats, it’s between politicians and everyone else,” Schleifer said in a phone interview. “Politicians treat health care like it’s a political football; everywhere else, people treat it as a way to see their doctor without going bankrupt.”