One Cringeworthy Post From the Past Probably Won’t Haunt You 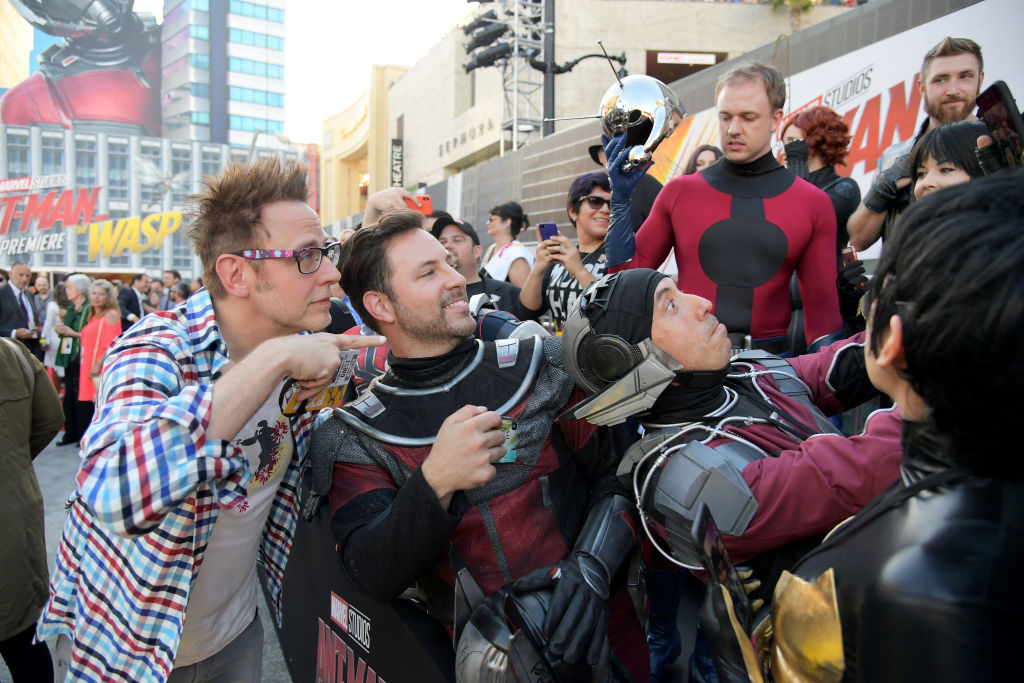 Director James Gunn attends the Los Angeles Global Premiere for Marvel Studios' "Ant-Man And The Wasp" at the El Capitan Theatre on June 25 in Hollywood. The Walt Disney Company fired him in July after critics highlighted his social media posts that made light of pedophilia and rape. (Photo by Charley Gallay/Getty Images for Disney)
By Sam Sabin

What celebrities or friends posted on social media years ago doesn’t play a huge role in how people view them, a Morning Consult survey suggests.

But U.S. adults still believe that overall, their own dated social media content represents who they are now — and they think the same thing about posts from people they know.

The seemingly contradictory findings come to light in a Sept. 20-23 poll of 2,200 adults that sought to gauge public attitudes toward social media posts that resurface a year — or a decade — later, and are deemed rude or improper. 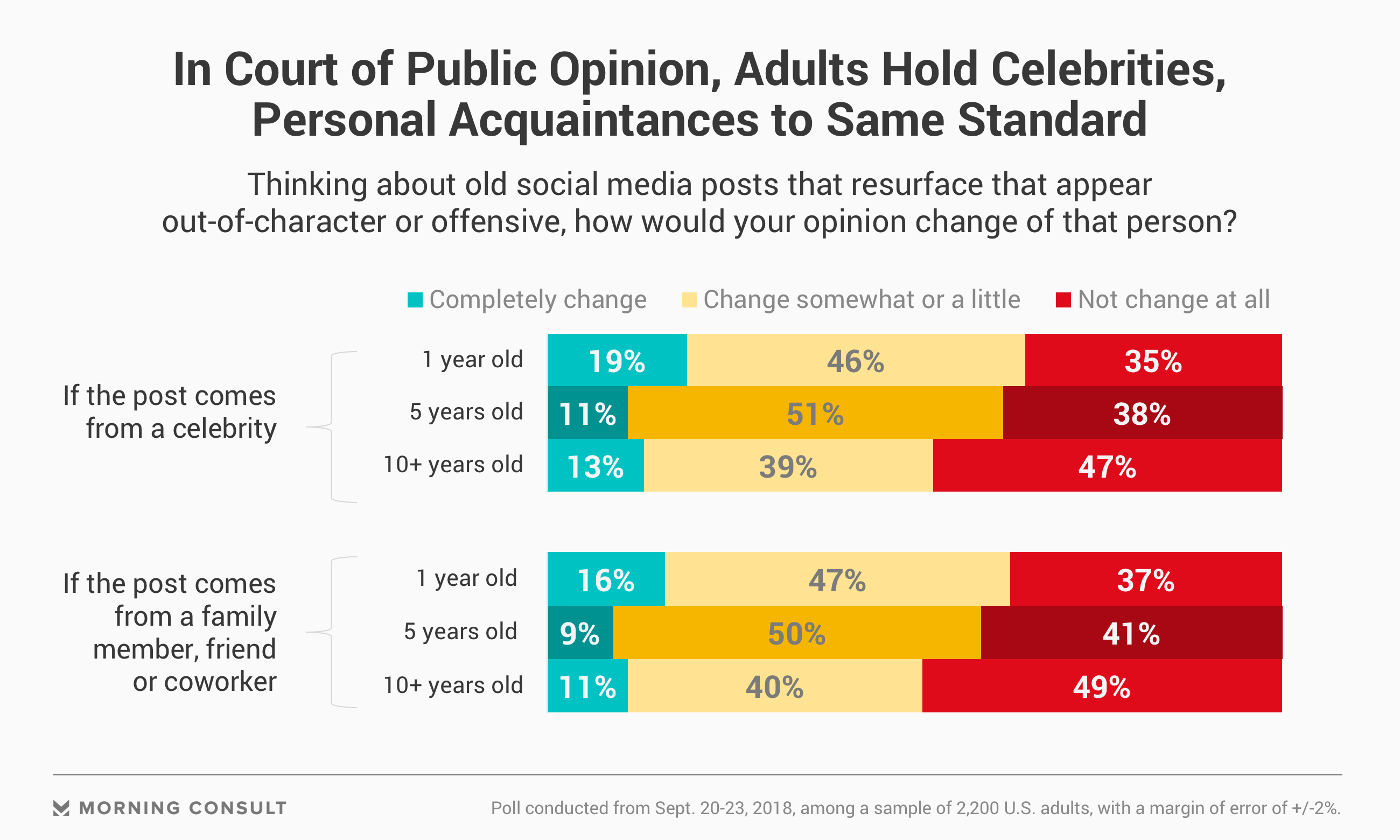 The issue has come to the forefront with recent critiques of old comments from high-profile figures: The Walt Disney Company fired James Gunn, director of the “Guardians of the Galaxy” movie series, in July after critics brought to light more than a dozen social media posts over the last decade where he made light of pedophilia and rape.

Likewise, when the year-old post comes from a family member, friend or colleague, 47 percent said their opinion would only change somewhat or a little, and 37 percent said the post wouldn’t change their impression at all. The survey has a margin of error of 2 percentage points.

I often ask the question, ‘How often do you Google yourself?’ And I don’t think people do that enough.

Gwen Appelbaum, assistant dean at the University at Buffalo School of Management

The older the post, the more forgiving people are: for problematic posts that date back a decade or more, 47 percent said the post would not change their opinions of a celebrity; 49 percent said the same about posts from people they know personally.

Beyond Gunn, several Major League Baseball players have also faced backlash for posting homophobic and racial slurs as teens, and the New York Times editorial board was criticized for hiring tech journalist Sarah Jeong in August despite her controversial tweets on race.

Karen North, a clinical professor at the University of Southern California’s communication school, said much of the backlash against celebrities come from preconceived notions of the public figures.

“We all have a confirmation bias,” she said. “So when you look at social media from the past, negative stuff is more problematic if it seems to confirm a suspicion or a piece of an image that you have for that person.”

Related: A Year Into #MeToo, Public Worried About False Allegations

Gunn defended his old posts by saying he has “developed” since those days: “It’s not to say I’m better, but I am very, very different than I was a few years ago,” he tweeted.

But while the public is more blasé about old posts in general, posts that violate certain social norms, such as racist or homophobic content, may not have an expiration date, said Gwen Appelbaum, assistant dean at the University at Buffalo School of Management.

“Extreme views would have a tricky time getting by, even if it was five to 10 years ago,” she said.

While any individual post from the past may not color their opinion of others all that much, 56 percent of adults agreed that their own old social media posts are an accurate representation of who they are today; 53 percent said the same of posts from personal acquaintances.

Overall, most people (54 percent) said social media posts influence their opinion of someone, no matter how old the post is. 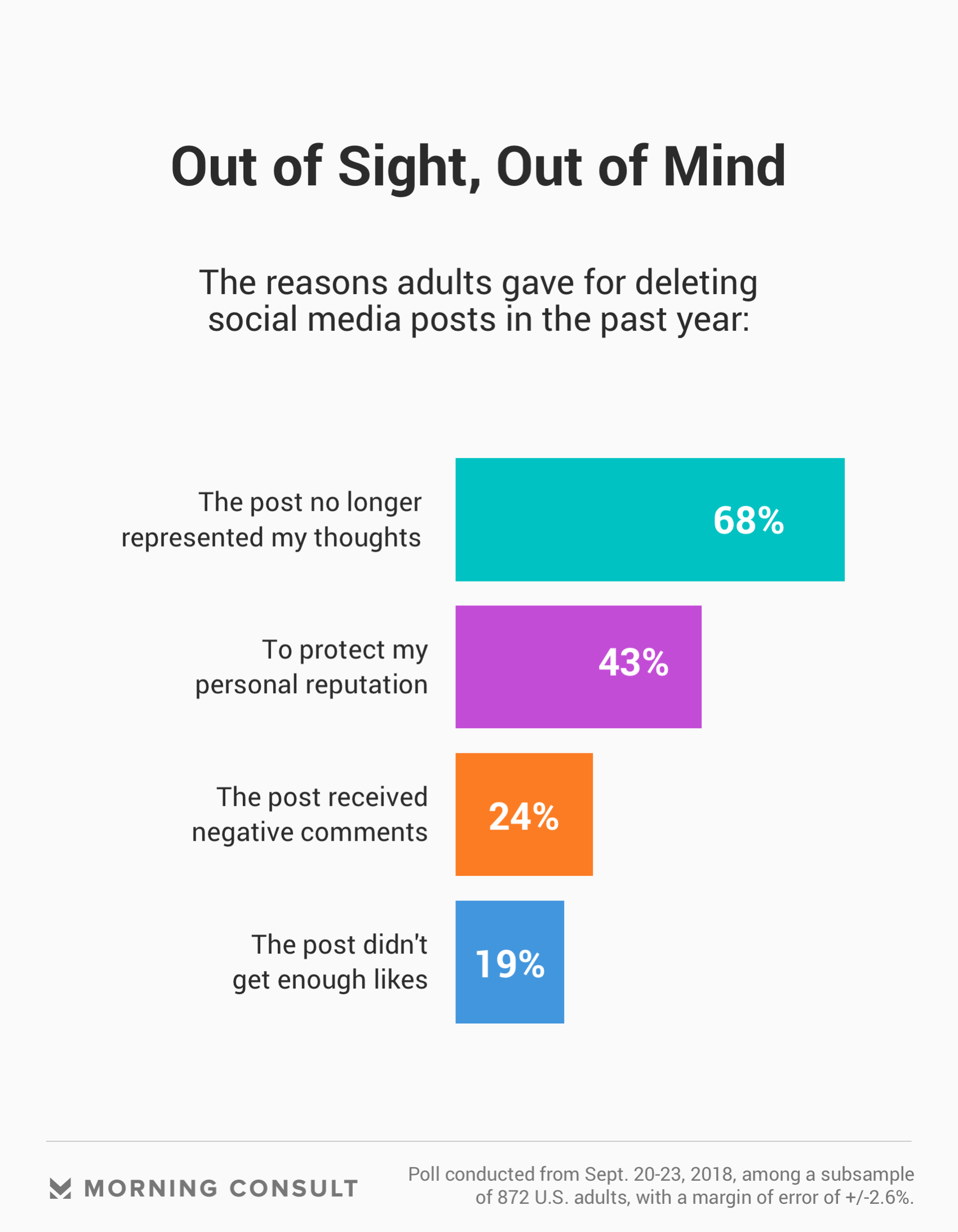 Appelbaum said she cautions students to clean up their online profiles before applying for jobs, as recruiters use social media and other online information in evaluating candidates.

“I often ask the question, ‘How often do you Google yourself?’ And I don’t think people do that enough,” Appelbaum said of her conversations with students. “I think people could always take it more seriously.”

Some young people may be following her advice: While only 18 percent of adults reported changing their social media accounts because of a job application, that number rises to 29 percent for those aged 18-29.

Overall, 43 percent of adults said they have deleted at least one of their social media posts in the past year. The most common reason, cited by 68 percent, was because the content no longer represented their thoughts. Another 43 percent said they deleted a post to protect their personal reputation. Less common reasons included scrapping posts with negative comments or without enough likes.

Related: Almost 3 in 4 Americans Say Trump Uses Twitter Too Much

North said people have become more concerned about what impact old social media posts could have on their personal and professional lives, especially in a heightened period of political correctness.

“There’s always been the threat of, ‘Don’t do that if it could end up on the front page of the newspaper,’” North said. “People say that to make people more aware of what their behavior might look like publicly, but that’s always been an idle threat — until recently.”