Cable Needs to Dial Up Flexibility, Dial Down Cost to Bring Back Cord-Cutters

The poll, conducted from Oct. 18-19 among a national sample of 2,201 adults, found 65 percent of respondents said that TV bundles force consumers to pay for channels they don’t want, with 73 percent of Americans saying they would prefer to choose the exact channels included in their cable or satellite TV packages.

Related: Young Cord-Cutters Concerned About Costs but Willing to Pay for Streaming

For most people, cost was the biggest reason for cutting the cord: 63 percent said the expense of a cable subscription was a major factor in dropping it, while 53 percent said the same for ending their satellite subscription. The second most common factor for cancellations, cited by 37 percent, was the ability to access all desired content through streaming services.

“You’ve got entire populations now who have gotten used to the viewing experience on things like Hulu, Netflix, and the rest of it,” Thompson said, pointing to the number of younger Americans who subscribe to streaming services. 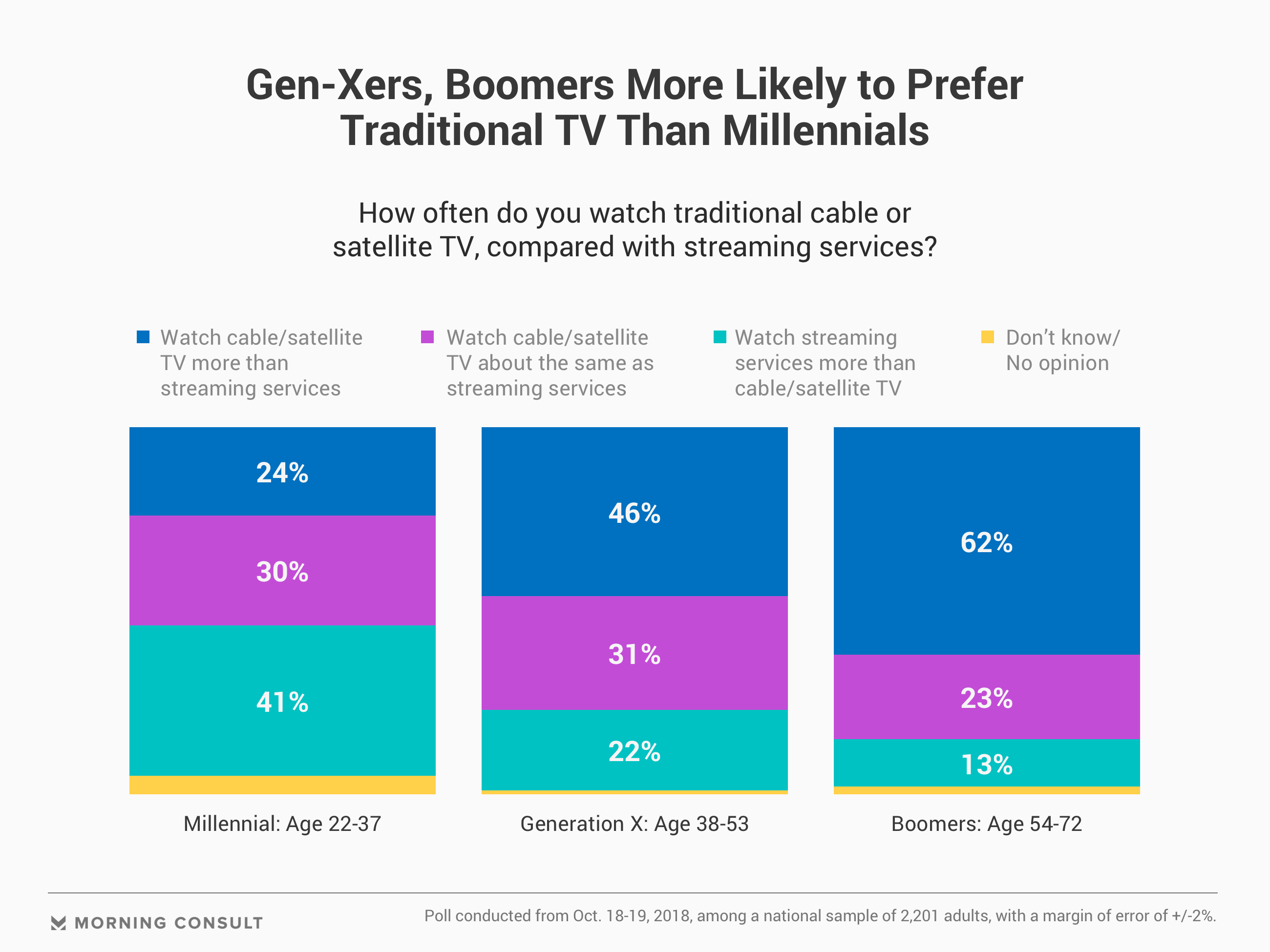 A 46 percent plurality of 18- to 29-year-olds in the survey said they use streaming platforms more often than traditional cable or satellite TV, more than double the 20 percent who said they watch more cable and satellite services.

Those numbers are almost flipped for Americans as a whole, 42 percent of whom said they use cable or satellite TV more than streaming services, compared with 27 percent who said they use streaming platforms more than traditional television.

Young people are also less likely than overall adults to cite cost as a very important factor in choosing a service, 67 percent to 74 percent, and more likely to prioritize features such as content on demand and exclusive content.

Cable or satellite providers may also have a window of opportunity: young adults were significantly more likely than the general population to say they’d subscribe or re-subscribe to cable TV (38 percent to 24 percent); 30 percent of 18- to 29-year-olds said the same for satellite TV, versus 17 percent of adults as a whole.

Other traditional media companies have launched their own streaming platforms, with mixed success.

WarnerMedia, which was acquired by AT&T earlier this year, announced on Friday that it would be shutting down FilmStruck, the company’s indie and classic cinema streaming service, on Nov. 29. Turner and WB Digital Networks said in a statement that the platform is “largely a niche service” that only catered to a subset of consumers.

“Streaming, we think is very challenging economically and we don’t want to rush into anything that — in any way, could sort of take what has been a tremendous television business and make it worse,” Stephen Burke, executive vice president of Comcast and CEO of NBCUniversal, said during the company’s earnings call.

Some traditional providers, like Comcast, have also tried to jump on the streaming bandwagon by including access to Netflix with certain packages. But these efforts have not done enough to effectively compete with the pivot towards online viewing.

Cable and satellite providers have been so slow to compete with streaming services so “any suggestion to them now is getting really late in the game,” Thompson said, adding that “this has gone miles and miles down the street of change.” 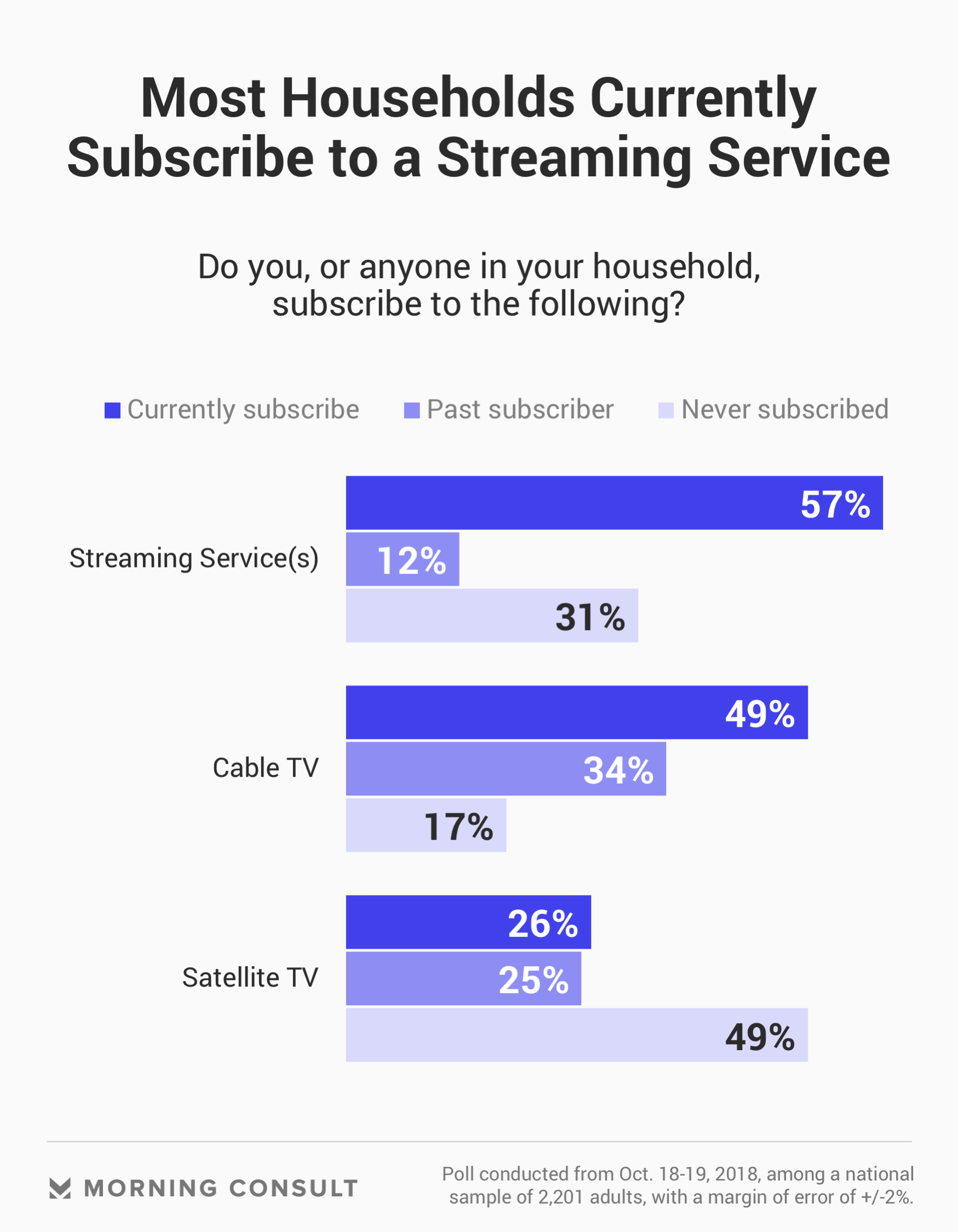 Cable or satellite providers may also fear alienating their base of traditional subscribers, most of whom are older and don’t subscribe to streaming platforms: a majority of those 55 and older say they’re cable subscribers, and most of those 65 and older have never subscribed to a streaming service; 47 percent of those 55-64 say the same..

Brett Sappington, senior director of research at market research and consulting company Parks Associates, said that a significant group of consumers — particularly older Americans — are willing to pay a little more for content because “traditional paid TV provides a premium experience,” like access to a wider variety of programming.

The survey indicates that quality of viewing content plays a role in how consumers determine which subscription to purchase, with 58 percent saying the quality of shows available was a very important factor in choosing a hypothetical bundle, the highest share after cost.

Related: Here’s What People Will Pay for Unlimited Movies

And following on the popularity of premium channels like HBO or Cinemax, 50 percent of Americans said it was very important for movie channels to be included in a hypothetical television bundle, the most popular pick among the options for bundles in the survey.

“They like what they get, they like the premium options,” he said. “They like having a big beefy DVR and all of the functions of that, and they like the channel guide. They may not even watch online all that much, and they may just have Netflix to be able to satisfy their online interests.”