For nearly half of all adults polled during controversy, Kelly’s blackface comments made no difference in favorability 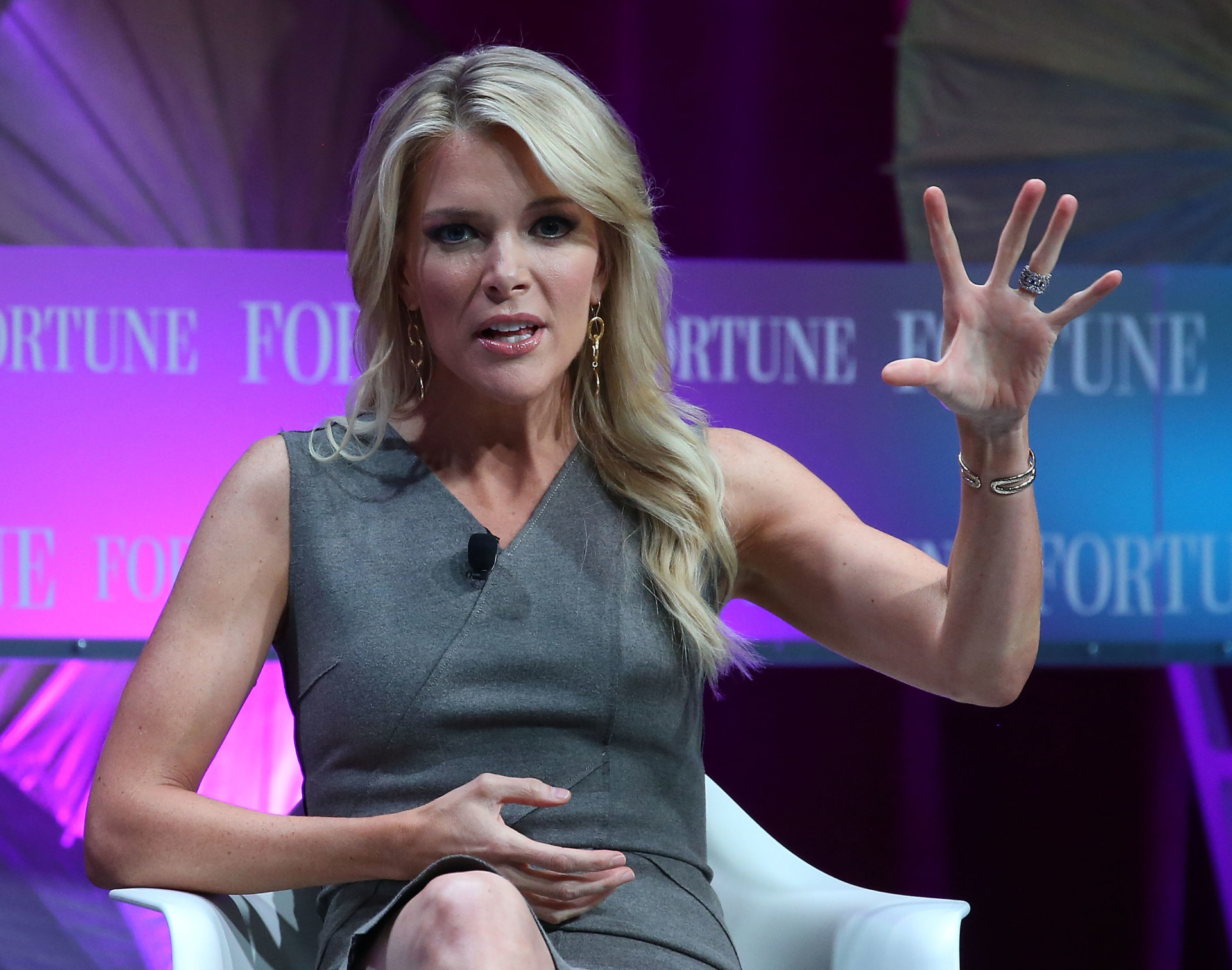 Megyn Kelly speaks during the Fortune summit on "The Most Powerful Women" at the Mandarin Hotel on Oct. 13, 2015, in Washington, DC. (Photo by Mark Wilson/Getty Images)
By Sam Sabin

Many believe the cancellation of daytime NBC talk show “Megyn Kelly Today” is too harsh of a consequence after host Megyn Kelly on her show appeared to defend wearing blackface on Halloween, a new Morning Consult/Hollywood Reporter poll shows.

During the show’s Oct. 23 episode, Kelly seemed to question why wearing blackface would be offensive on Halloween, saying during a roundtable discussion: “What is racist? Because, truly, you do get in trouble if you are a white person who puts on blackface on Halloween or if you’re a black person who puts on whiteface for Halloween.” She added that when she was a child, altering skin tones was OK as long as someone was dressing up as a character. Kelly later supported “The Real Housewives of New York” star Luann de Lesseps’ decision to darken her skin for a Diana Ross costume. 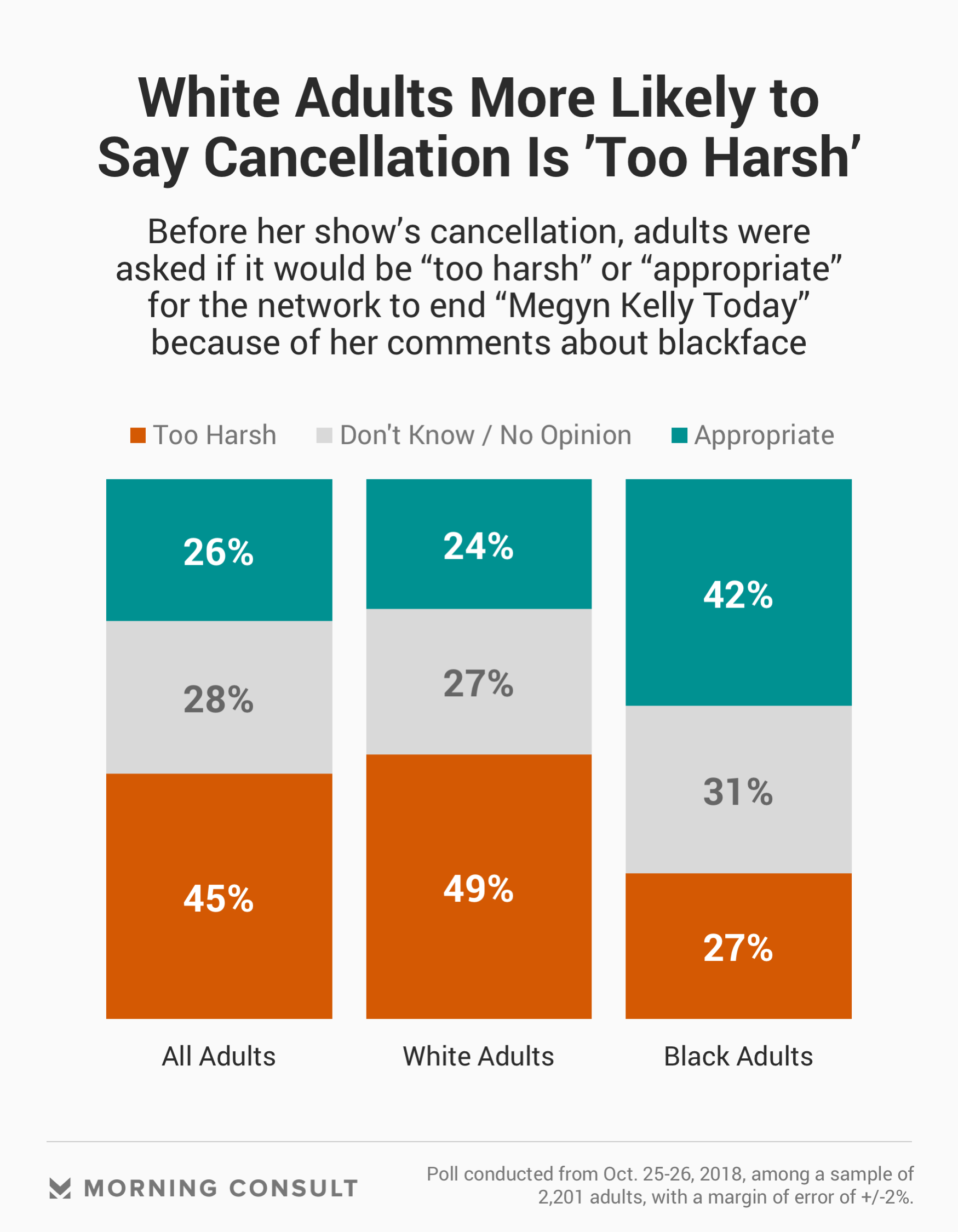 By Friday, NBC News announced that it had canceled the show — a move that 45 percent, a plurality, of Americans said would be too harsh of a consequence, according to the poll conducted Oct. 25-26 in the wake of her comments but partly before the cancellation was made public. About a quarter of the 2,201 adults surveyed (26 percent) said canceling the show would be an appropriate consequence, and 28 percent said they didn’t know or had no opinion. The survey has a margin of error of 2 percentage points.

However, when broken down by race, those numbers look different. Forty-two percent of African-Americans said the show’s cancellation would be appropriate, while 49 percent of white adults said it would be “too harsh” of a consequence. 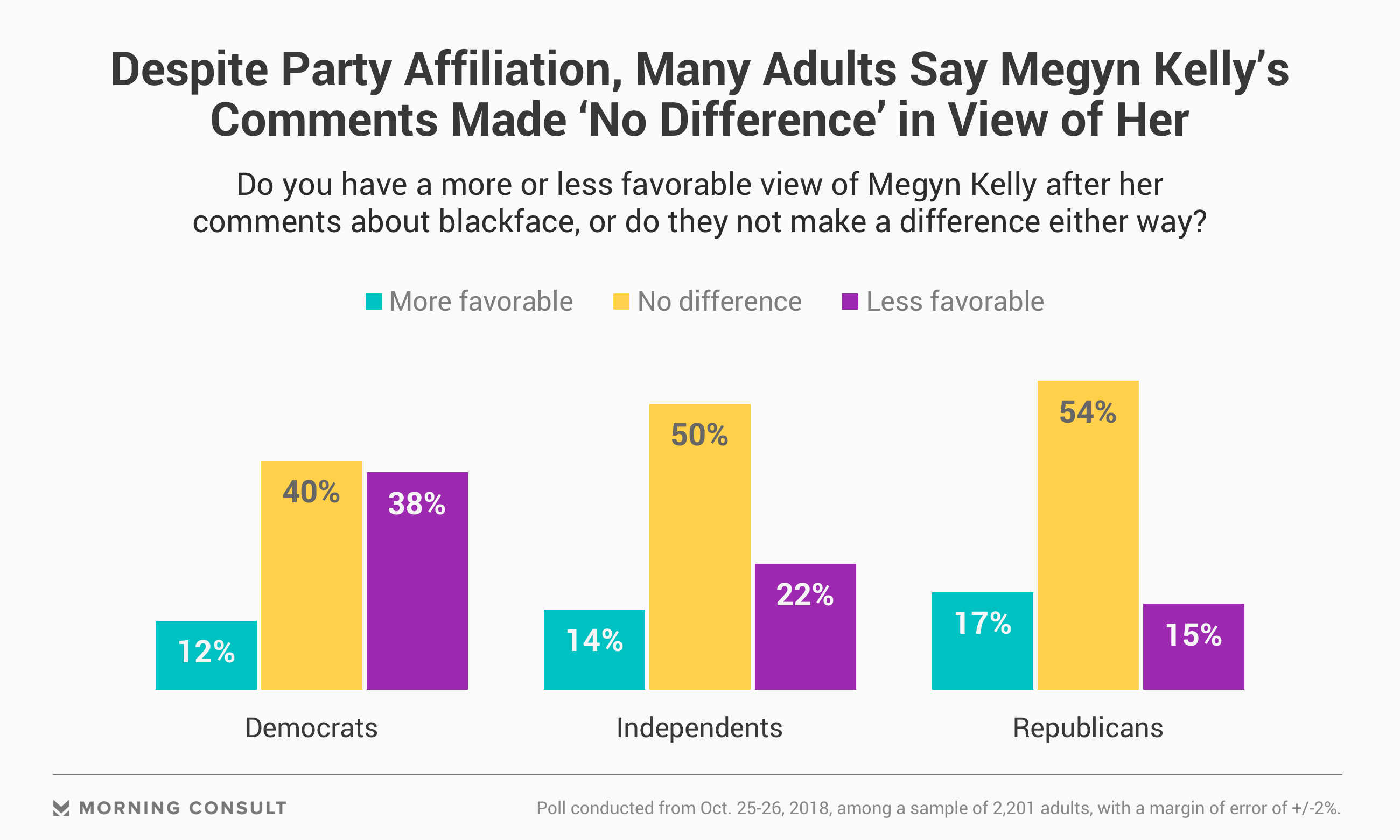 Kelly’s comments may have played into preconceived notions of the talk show host, who was criticized for making what some viewers saw as racially charged statements on air while working at Fox News. Forty percent of adults said they already had an unfavorable view of Kelly, while 21 percent had a favorable view. The rest either had no opinion of her, despite knowing the name, or had never heard of her.

Among African-Americans, of which 66 percent already had a favorable view of NBC, 31 percent said the move made them view NBC more favorably, while the same amount said it made no difference. Overall, 41 percent of adults, a plurality, said the decision made no difference in their view of NBC, while 29 percent said the move made the network less favorable in their view.

Related: Voters Split on Whether Remarks Like Roseanne’s Mean Someone Is Racist

Correction: A chart headline misstated the share of adults who said Kelly’s comments made “no difference.”