Why the Health Care Industry Is Happy About Gridlock in Congress 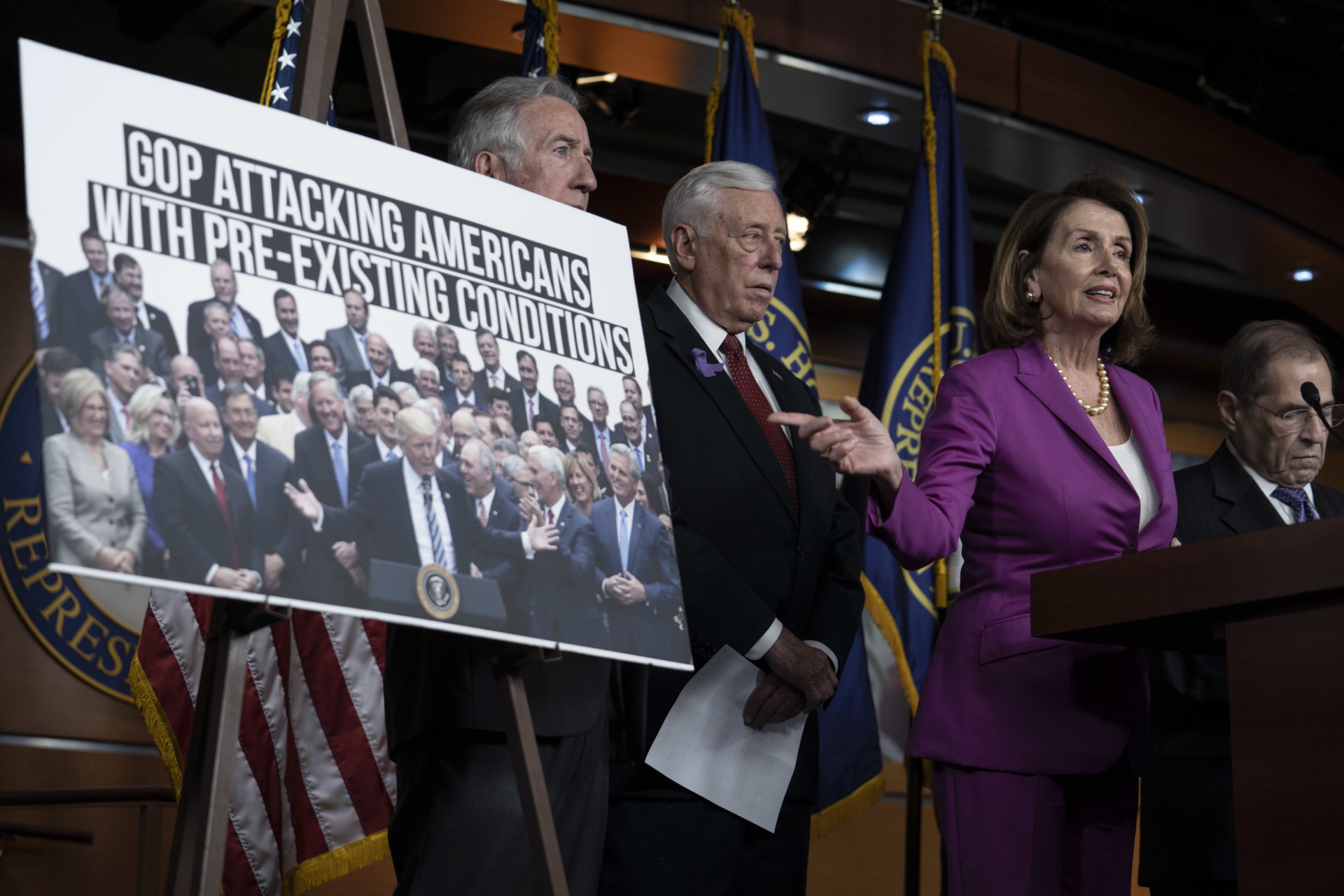 Long before polls opened on Tuesday morning, Democratic candidates in congressional and gubernatorial races across the country had cast the midterm elections as a referendum on the state of the health care system and the sanctity of the Affordable Care Act.

With a majority in the House of Representatives, Democrats now have defensive leverage to hold the administration accountable for its actions toward the ACA and shut the door on a repeal of Obamacare during President Donald Trump’s first term.

But voters hoping for large-scale health reform shouldn’t expect any dramatic policy changes from the shift in power, since Republicans maintain a majority in the Senate. That’s good news for the health care industry, which had been hoping for some stability after two years of wide-ranging health bills that sought to overwrite or alter the ACA.

“It does create a little stability for the industry, knowing that no drastic change is going to happen,” said Arthur Tacchino, chief innovation officer at SyncStream Solutions, an ACA reporting and compliance company. “The bad thing is that we are sort of at a gridlock position. We’re not going to see much happen for the next couple years.” 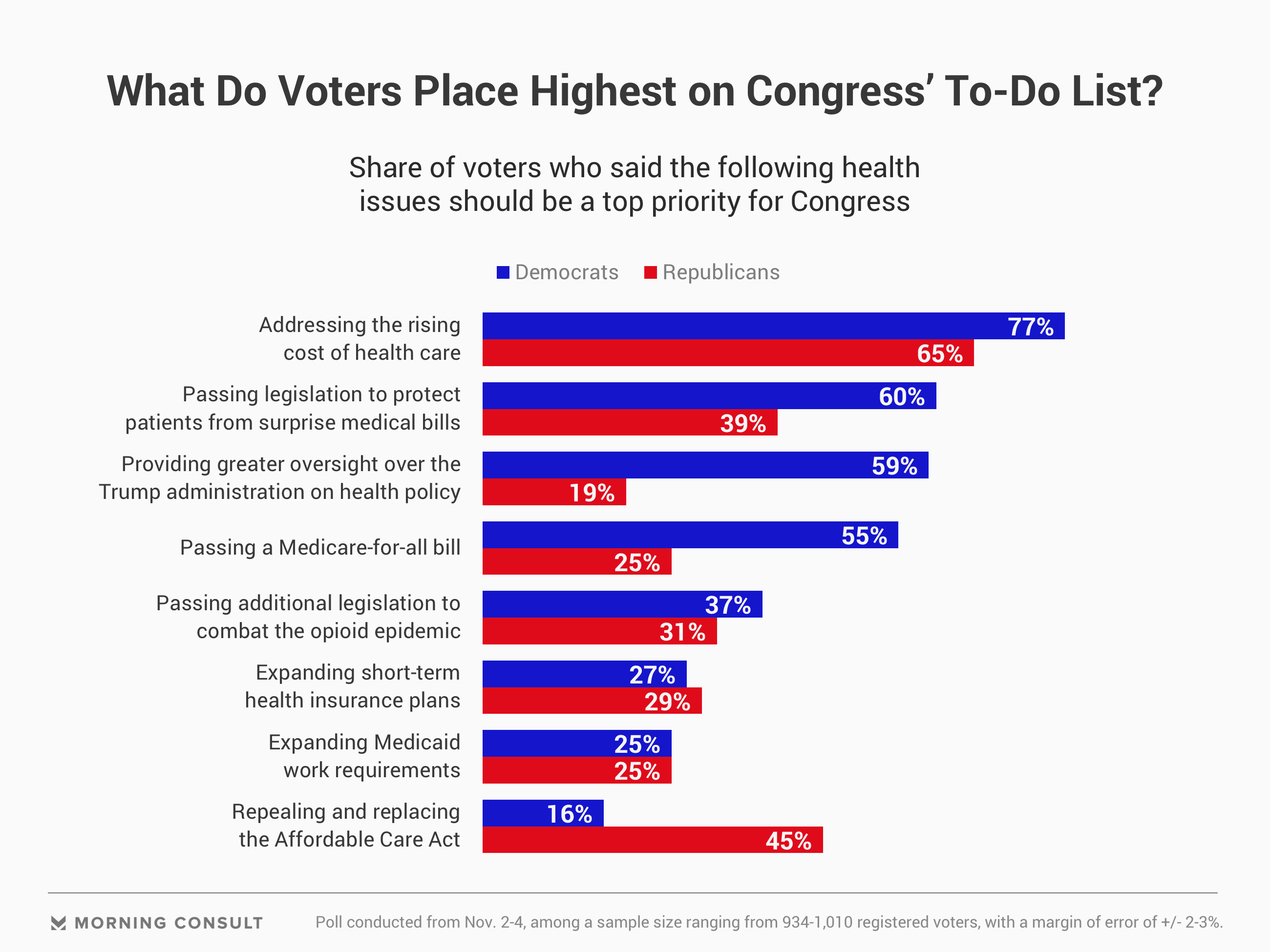 Ben Isgur, the leader of PwC’s Health Research Institute, said the approval of Medicaid expansion ballot initiatives in three states is also a win for the industry, increasing the population ofinsured people — or paying customers.

Upcoming policy changes are likely to focus on areas with bipartisan support and on issues that affect consumers, such as price transparency, health care quality and health care costs, Isgur said.

Per a Morning Consult/Politico poll conducted Nov. 2-4 among registered voters, 77 percent of Democrats and 65 percent of Republicans said addressing the rising cost of health care should be a top priority for Congress. The poll had a sample size of 973 to 1,963 voters and had a margin of error of 2-3 percentage points.

But even in the absence of major policy changes, experts expect Democrats to use their new committee chairmanships and subpoena power to probe the administration’s health care policy actions.

Colin Strother, a political analyst and Democratic campaign consultant, said the Democratic House will likely focus on increased oversight of the Trump administration’s health care policies — including the expansion of short-term health plans that don’t include the ACA’s consumer protections, and its backing of a Texas lawsuit aiming to strike down Obamacare.

“They’ve whittled around at the edges of it and vandalized it and tried to make things difficult for the users,” Strother said about the Trump administration’s actions on the ACA. “I do think that you’ll see Democrats push back and re-establish some of those elements that were put in place.”

In the survey, 59 percent of Democrats said a top priority for Congress should be providing greater oversight over the Trump administration on health policy issues, including potential changes to the ACA, compared to 19 percent of Republicans who said the same.

Rep. Elijah Cummings (D-Md.), ranking member of the House Oversight Committee, said in an email Tuesday that if Democrats took control of the House, they plan to serve as a check on executive power “by conducting credible, responsible oversight of the Trump administration.”

“That means investigating skyrocketing prescription drug prices, actions that would threaten protections for people with pre-existing health conditions and efforts to undermine the Medicaid program,” he said.

With the split power arrangement also comes potential for bipartisan legislation, such as passing legislation to protect patients from surprise medical bills and addressing the rising cost of prescription drugs.

Passing a bill to protect patients from high charges from out-of-network providers is a top-of-mind issue for voters, with 48 percent saying it should be a top priority for Congress, including 60 percent of Democrats and 39 percent of Republicans. In early September, a bipartisan group of senators introduced legislation targeting these concerns.

According to Tacchino, the new Congress will shift focus from repealing the ACA toward bipartisan legislation that amends or fixes the health care system.

With the election in the rearview, industry watchers are focused on Texas District Judge Reed O’Connor, who has yet to rule on the lawsuit that would end up striking the ACA’s protections for pre-existing conditions.

These protections contributed to the importance of health care in the 2018 midterm cycle and now are unlikely to fade from the public eye, Isgur, from PwC, said.

“We saw a shift over time of pre-existing conditions becoming much more of a bipartisan issue,” Isgur said. “Most people in the industry believe we are going to keep those protections in place, because they are so popular.”