Subject outweighs other issues, such as net neutrality, that have less bipartisan support

Many U.S. voters in a recent Morning Consult/Politico poll, including pluralities of both Democrats and Republicans, said they’d like to see the next Congress make it a top priority to pass measures that better protect consumer data, outweighing other more partisan concerns such as efforts to codify net neutrality and addressing allegations of political bias and censorship on social media.

The survey, conducted Nov. 2-4 among national samples of between 971 and 1,017 registered voters, depending on the question, found that a 40 percent plurality of respondents, including 43 percent of Democrats and 37 percent of Republicans, said it was a top priority for the next Congress to pass legislation to better protect consumers’ online data.

The poll subset has a margin of error of plus or minus 3 percentage points. 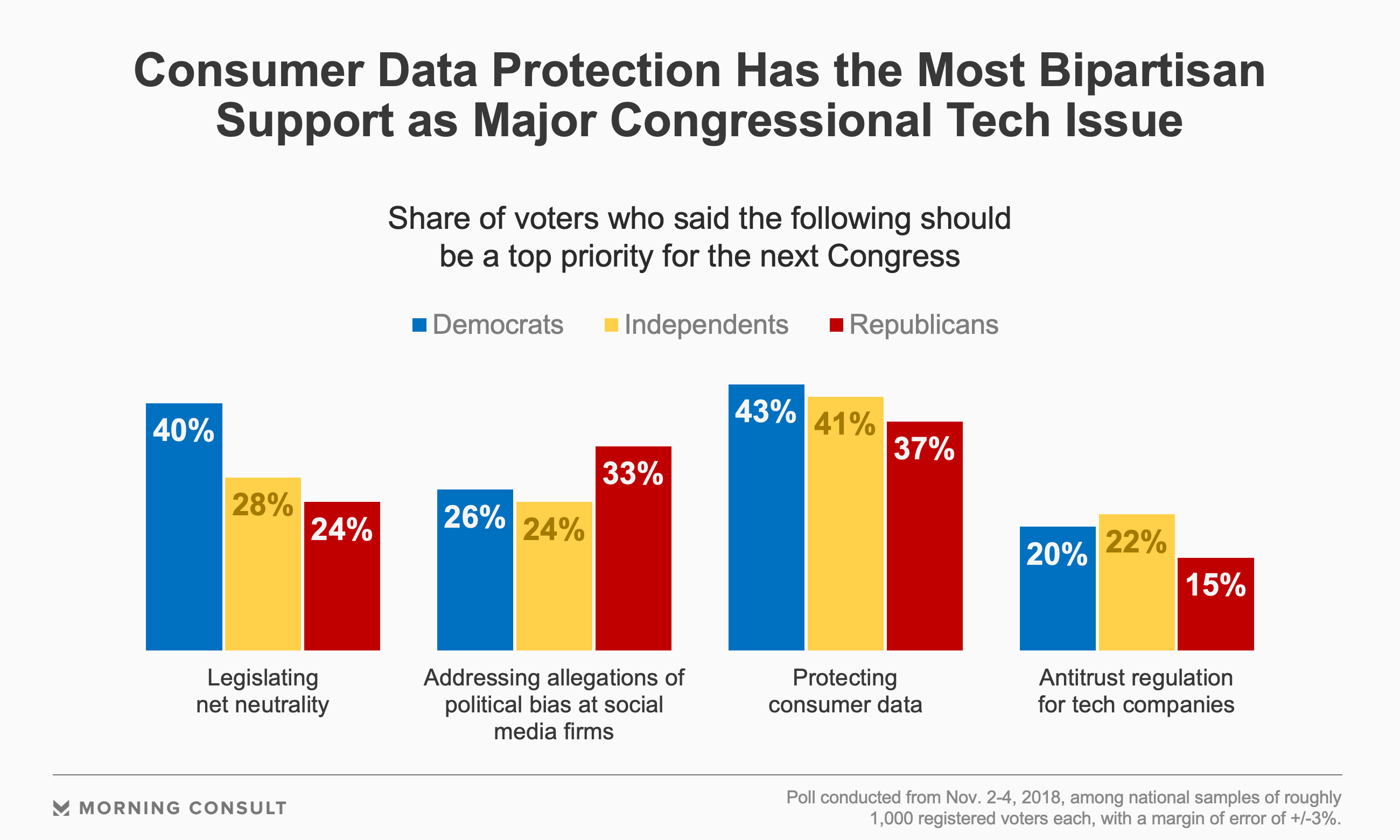 Recent high-profile hacks and concerns about the ways in which tech firms use consumers’ personal data have increased awareness of existing data privacy vulnerabilities, with data breaches at Facebook Inc. and Google that were disclosed this year leading to public outcry.

Experts say that a Democratic House and a Republican Senate are likely to find common ground on the issue, as it represents an area where lawmakers from both sides of the aisle would like to see some action.

Sen. John Thune (R-S.D.), chairman of the Senate Commerce, Science and Transportation Committee, announced during a Sept. 26 committee hearing that Congress was likely to implement some sort of consumer data privacy legislation, indicating that the outstanding question was “what shape that law should take.” And last month, Rep. Ro Khanna (D-Calif.), who represents Silicon Valley’s district, unveiled an “Internet Bill of Rights” that he said would serve as a useful framework for crafting data privacy legislation.

Roslyn Layton, a visiting scholar at the conservative American Enterprise Institute who specializes in tech policy, said she believes Congress will be able to formulate a bipartisan solution because they have “a very nice runway for online privacy.”

“Where there’s consensus, it’s pretty easy to do legislation,” Layton said in a Tuesday phone interview. “It’s a win-win, and now everybody has kind of weighed in, and we’re sort of working out the details.”

Fewer U.S. voters in the survey said other tech issues, such as codifying net neutrality and addressing allegations of political bias and censorship, should be a top priority.

Thirty percent of respondents said the next Congress should make legislation protecting net neutrality a top priority, but the party splits were more drastic, with 40 percent of Democratic voters saying this should be a top priority for the next Congress, while less than a quarter (24 percent) of Republicans said the same thing, and a plurality of GOP voters said it should be an important but lesser priority.

And despite Republican leaders like President Donald Trump and House Majority Leader Kevin McCarthy (Calif.) criticizing social media platforms like Facebook and Twitter Inc. for allegedly censoring conservative users, respondents overall were split — 28 percent each — on whether addressing the issue should be a top priority or an important but lower one, with a third of GOP voters saying it should be a top priority.

Rep. Frank Pallone (D-N.J.), the current ranking member of the Energy and Commerce Committee and the likely chairman in the next Congress, noted in a Monday statement that a Democratic committee working group “has been seriously looking at privacy and data security issues for several months now.”

“I look forward to discussing these issues and others with my colleagues after the election, and then we will determine the best way to proceed,” Pallone added.