Tucker Carlson, Laura Ingraham and Ainsley Earhardt are Republicans’ favorite television hosts, with Fox News personalities making up the group’s top 13 most-loved hosts, according to a Morning Consult/Hollywood Reporter survey that looked at Americans’ trust in well-known anchors on network and cable TV.

Shepard Smith, who made headlines last month for downplaying his own network’s coverage of the immigrant caravan in Mexico, is the least-loved Fox News personality among members of the GOP, according to the survey, which polled 2,202 U.S. adults from Nov. 6-7. 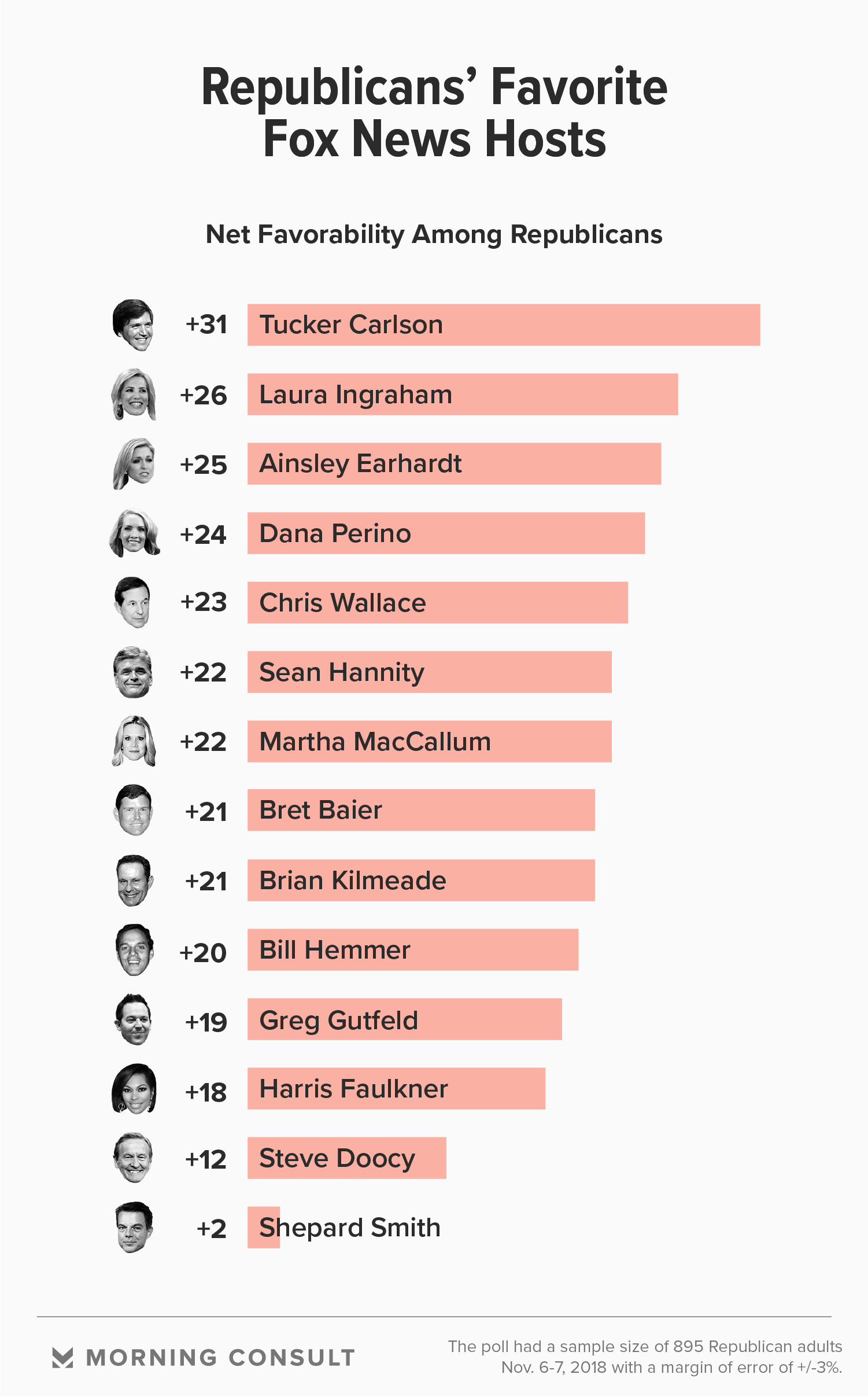 Twenty-three percent of Republicans have a favorable view of the “Shepard Smith Reporting” host, while 21 percent perceive him unfavorably.

In the days leading up to the midterm elections, Fox News anchors, including Carlson and Sean Hannity, dedicated a notable amount of airtime to warning viewers about a caravan of Central Americans allegedly heading north toward the U.S.-Mexico border. A Fast Company analysis of Fox News transcripts on LexisNexis shows the network used the word “caravan” 86 times on air the day before the election.

By contrast, Smith told viewers of his daytime show that there was little evidence for fear.

“There is no invasion. No one’s coming to get you. There’s nothing at all to worry about,” Smith said on his show Oct. 29, after implying news of the caravan was timed to coincide with the midterm elections. Ahead of the midterms, more voters trusted Republicans over Democrats on the issue of national security, according to Morning Consult/Politico tracking data.

Smith has often taken a contrary position to others on the network: In November 2017 he debunked the theory that former Secretary of State Hillary Clinton greenlighted a uranium deal that benefited her foundation, a storyline his colleagues were reporting.

Related: Most Young Adults Have an Appetite for Binge-Watching Shows

Similar shares of Republicans said they had not heard of Tucker (32 percent) and Smith (36 percent). The survey has a margin of error of 2 percentage points.

Although “Hannity” is the most popular show on Fox, with 3.5 million viewers last month, among Republicans its namesake is in fifth place on favorability among figures at the network and overall. But Hannity is the most trusted among Republicans, with 32 percent saying they trust him “a lot.”

“Hannity” was the most-watched cable news program for the seventh consecutive month in October, Fox said. 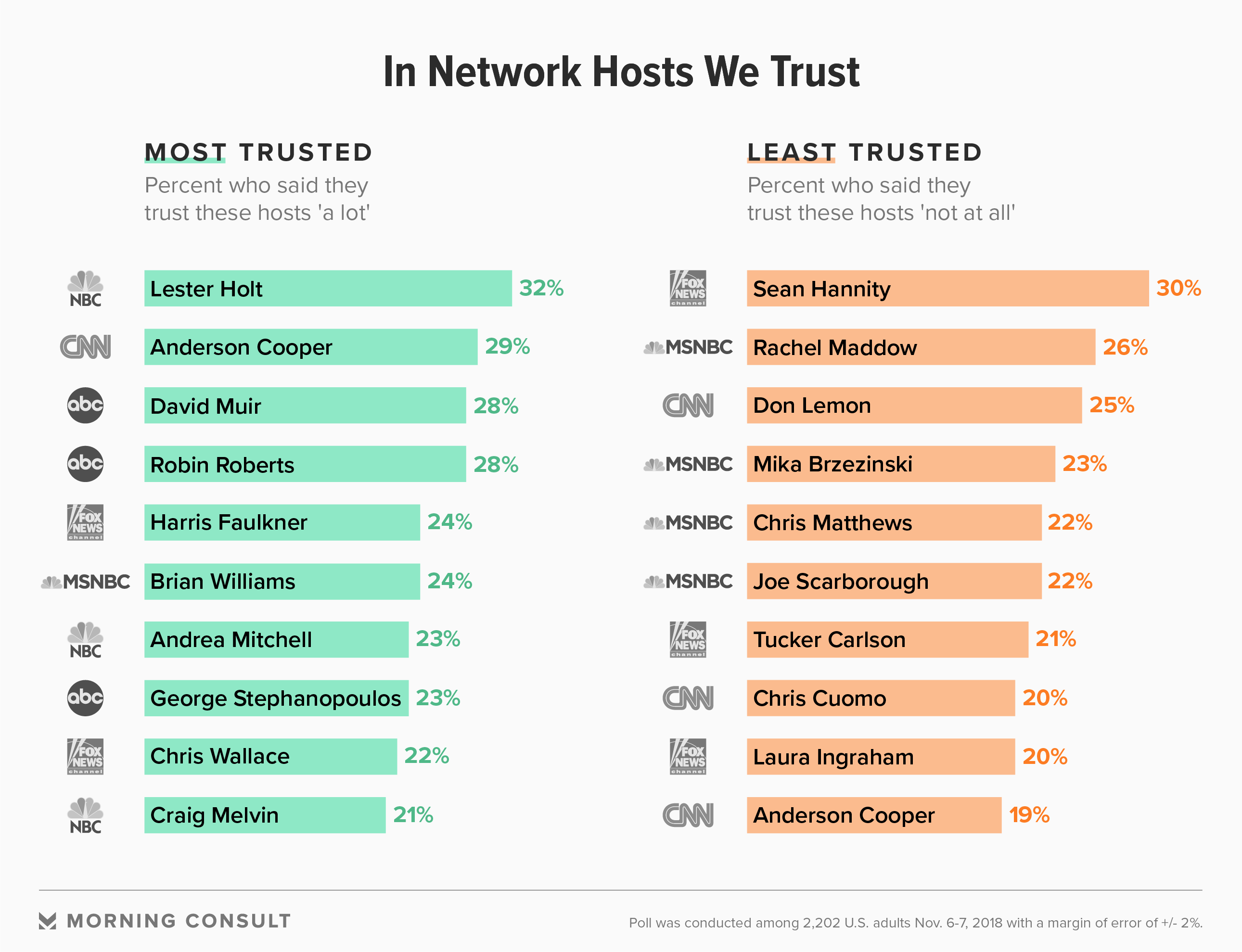 When it comes to trust, a larger share of the public perceives network news hosts as trustworthy than their counterparts on cable TV.

Brian Williams — who was suspended and then removed from his post as host of “NBC Nightly News” in 2015 after misrepresenting several personal experiences while reporting — is considered one of the most trustworthy anchors on the air. Roughly one-quarter say they have “a lot” of trust in Williams, who currently hosts MSNBC’s “The 11th Hour with Brian Williams.”

Lester Holt, who replaced Williams as NBC’s evening news host, is the most-trusted news figure on television. Forty-six percent of Democrats and 22 percent of Republicans say they have “a lot” of trust in him, a higher share than the Republicans who say the same about Fox News’ Smith (14 percent).

Correction: A previous version of the graphic listing most-trusted hosts misidentified the network logos for Andrea Mitchell and Brian Williams.