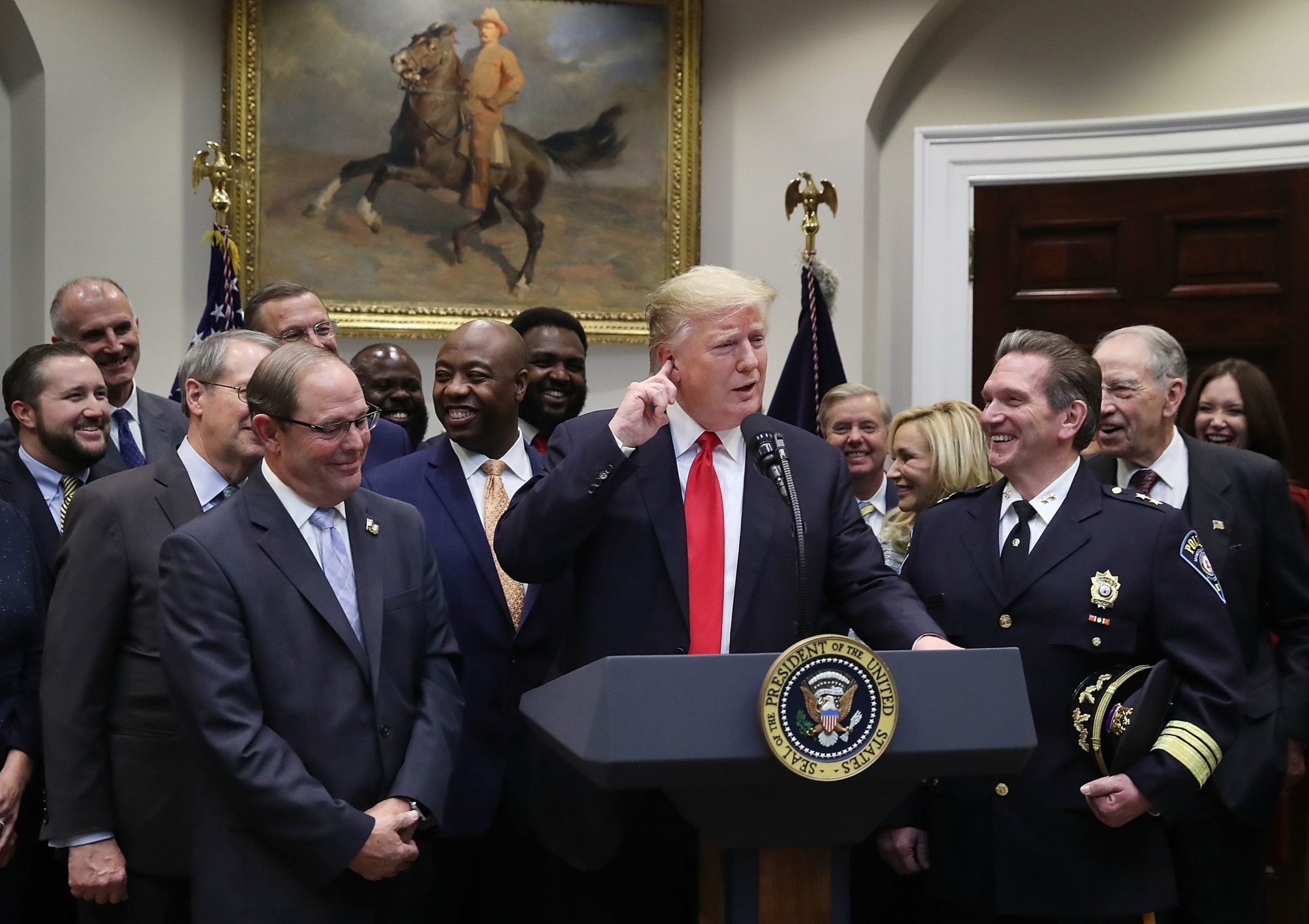 Most Democrats support key provisions of a proposed criminal justice overhaul that has broad bipartisan support in both chambers of Congress, but mention of President Donald Trump’s endorsement of the measure elicited skeptical responses about the overall legislation.

A Nov. 15-18 Morning Consult/Politico survey showed Democratic voters were split on the bill — 31 percent in favor versus 29 percent opposed — that Trump and a bipartisan group of senators are hoping to pass before the end of the year.

Twice as many Republicans (62 percent) backed the measure as Democrats, and a 39 percent plurality of Democratic voters said they were unsure or had no opinion on it. 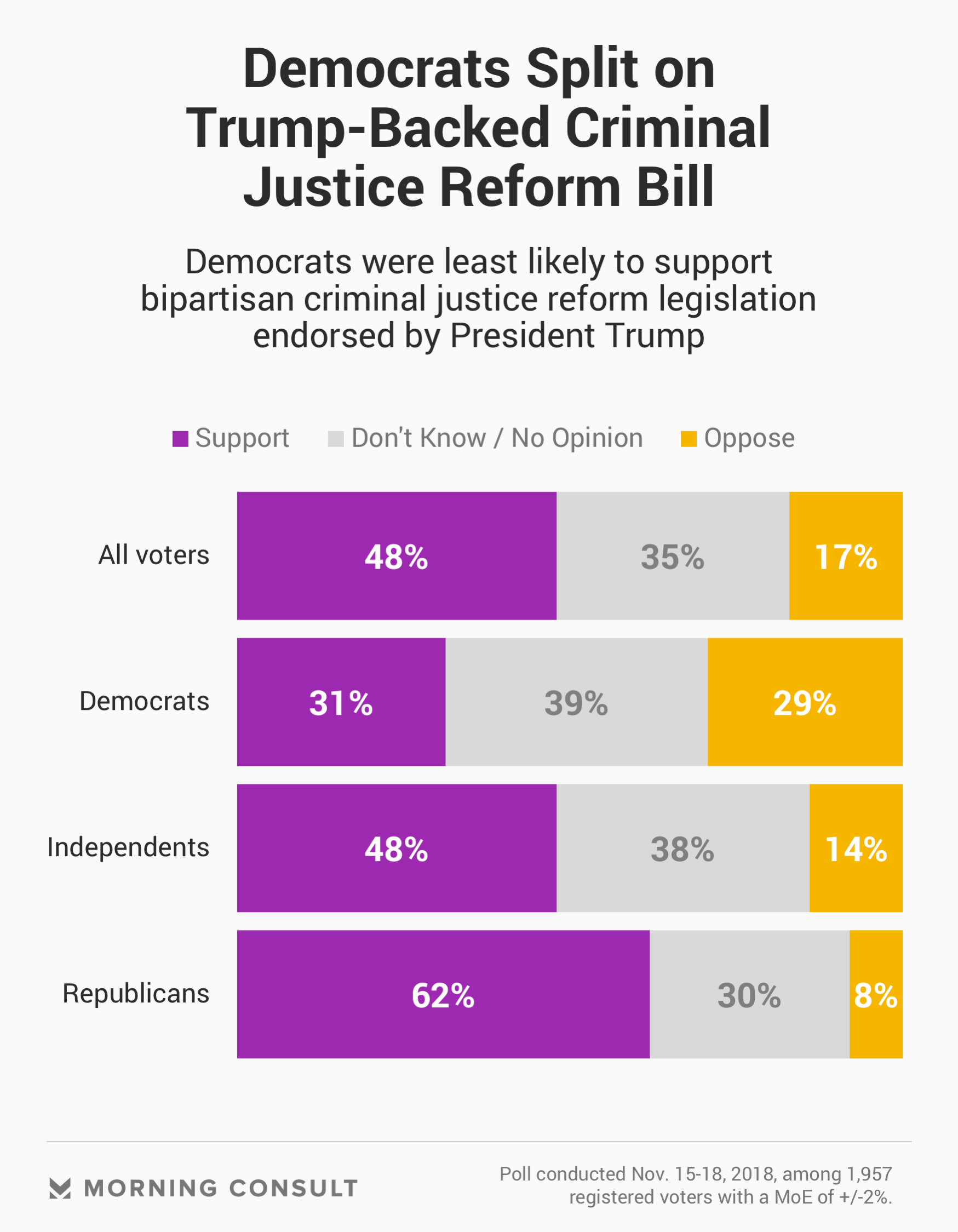 The survey went on to press respondents on specifics of the measure, and found most Democrats liked what they saw.

Six in 10 Democrats supported making crack and powder cocaine offenses more similar in an attempt to address a disparity that has often resulted in tougher punishment for black offenders than white offenders. And 57 percent of Democratic respondents also backed lowering mandatory minimum sentences for drug felonies, including reducing the current three strikes penalty from life in prison to 25 years in prison.

Daniel Hopkins, an associate professor of political science at the University of Pennsylvania, likened those sentiments expressed by Democrats in the survey to Republicans’ views about the Affordable Care Act, which has been viewed negatively by Americans despite their approval of many of its provisions.

“One explanation is the opposite of the Midas touch,” he said in an email Tuesday. “As soon as a polarizing politician is associated with a piece of legislation, whether it was Obama with the Affordable Care Act or Trump with criminal justice reform, that partisan cue can often override citizens’ evaluations of the specific elements of the legislation.”

Stephanie Cutter, a Democratic strategist and former Obama administration and campaign official, said Tuesday that Democrats “wholeheartedly support reforming our criminal justice system,” but the presence of the unpopular president in the debate might be causing wariness.

“Any hesitation in support is likely due to the bill either not going far enough, or overall suspicion of the substance because President Trump is involved,” she said.

The Senate legislation, dubbed the “First Step Act” by its supporters, was released before Thanksgiving with the support of an ideologically diverse group of senators, from conservative Sen. Mike Lee (R-Utah) to liberal Sen. Cory Booker (D-N.J.).

In interviews earlier this month, two other Republican supporters of the bill, Sen. Lindsey Graham of South Carolina on NBC’s “Meet the Press” and Sen. Rand Paul of Kentucky on CBS’ “Face the Nation,” said the measure would pass easily if it were put to a vote. (Graham said it’d get 80 votes and Paul said 60 to 70.)

But despite the strong Republican support for the overall measure, the poll also goes some way to explaining why Senate Majority Leader Mitch McConnell (R-Ky.) could be loath put it on the floor, despite public urging from the president and Senate Judiciary Chairman Chuck Grassley (R-Iowa).

Support among GOP voters falls to a 45 percent plurality on the issue of lowering mandatory minimum sentences for drug felonies.

Sen. Tom Cotton (R-Ark.) has been the loudest dissenting GOP voice in the current debate, and McConnell has given no assurances he’ll bring the measure up in his chamber, which faces a Dec. 7 government-funding deadline, the farm bill and a slate of nominees to consider before it wraps up its work for the 115th Congress.

Jonathan Blanks, a reform supporter who studies the issue at the libertarian Cato Institute, said that a lack of political blowback for recent reforms aimed at reducing prison populations implemented in a number of Republican states — including Texas and Georgia — should help relieve political concerns.

“State-level criminal justice reform has been going on for several years, and it’s actually been led by GOP states,” he said. “More and more Republicans are coming on to it and understanding that just because we’re making sentences lighter, it doesn’t mean we’re being any less tough on crime.”