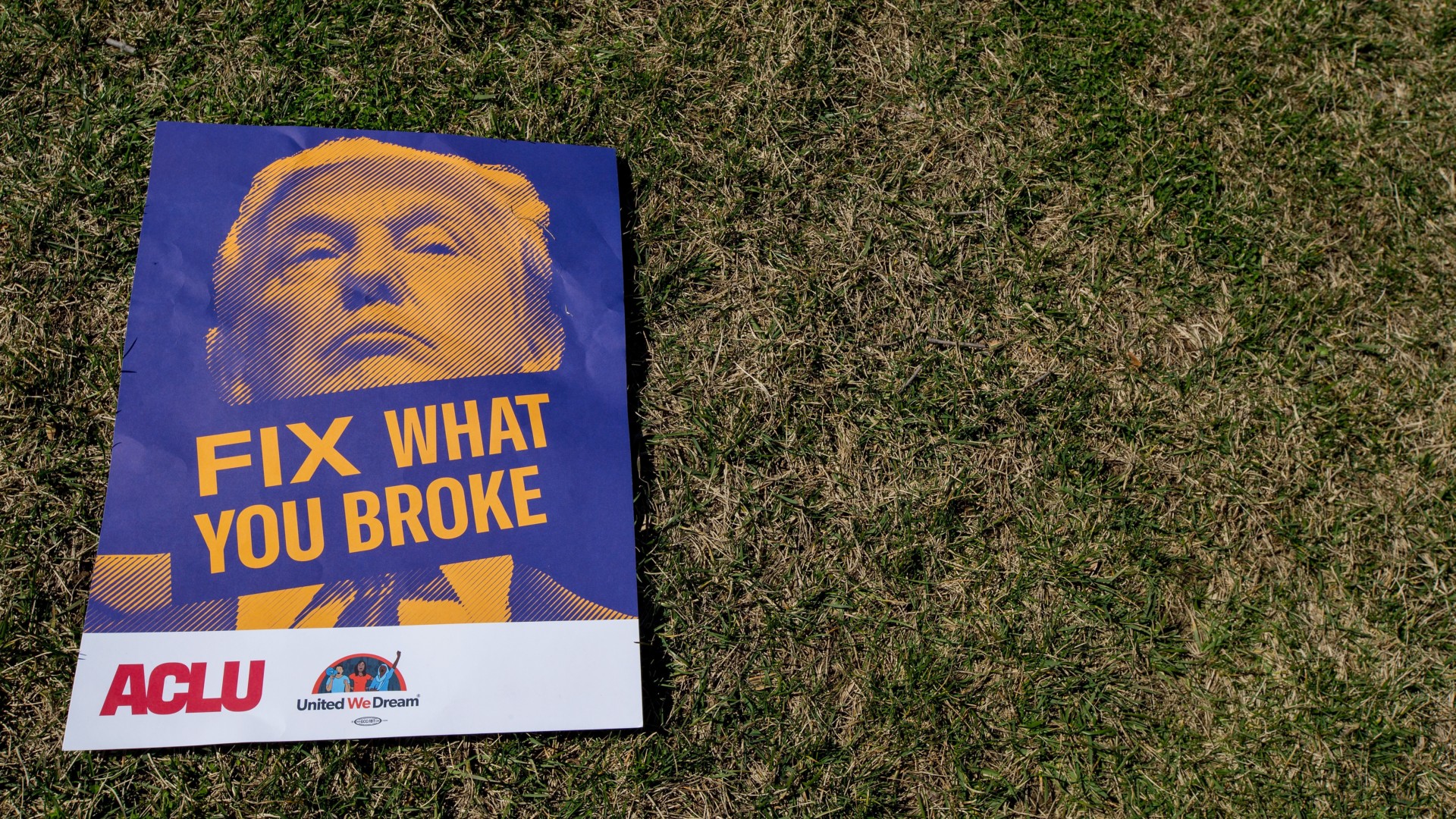 A poster carried during a DACA and Dreamer supporters' march in Washington on March 5, 2018. (Photo by Tasos Katopodis/Getty Images for MoveOn.org)
By Sam Sabin

In past cycles, facing both a divided Congress and an off-election year would be enough for advocacy groups to justify shrinking their budgets for issue ad spending. But looking at 2019, which will see its first divided Congress since the 2013-2015 session, two compelling factors are encouraging advertisers to loosen their wallets: the next presidential election and an expansion of digital marketing tools that allows for more targeted advertisements.

Despite an incoming Congress where Republicans hold a majority in the Senate and the Democrats have the House, a split that traditionally translates to lower spending on issue ads because of an expected slowdown in passed legislation, political advertisement vendors and advocacy groups alike anticipate their ad spends will be higher than what would normally be expected in a divided session.

The figures include spending on campaign ads and special interests and issues advertisements, which totaled an estimated $9.5 billion in 2018.

And at more partisan agencies, the message is the same: Issue and advocacy ad spending will grow compared to last year, despite an upcoming divided Congress.

The spending increase stems from the ever-growing array of digital and online advertising tools available to them, advocacy groups and communications experts say, expanding the number of groups an advertiser can target in campaigns.

“You used to have this kind of map in your head if you had an issue in Washington of who needed to know your point: Was it somebody in the executive branch or members of certain committees?” said Craig Kirchoff, creative director at Purple Strategies, a nonpartisan political communications firm in Alexandria, Va. “Those rules have been bent a bit.”

Because online ad targeting tools are making it easier for advertisers to target specific audiences with tailored messages, they can ease their reliance on mass marketing tactics. 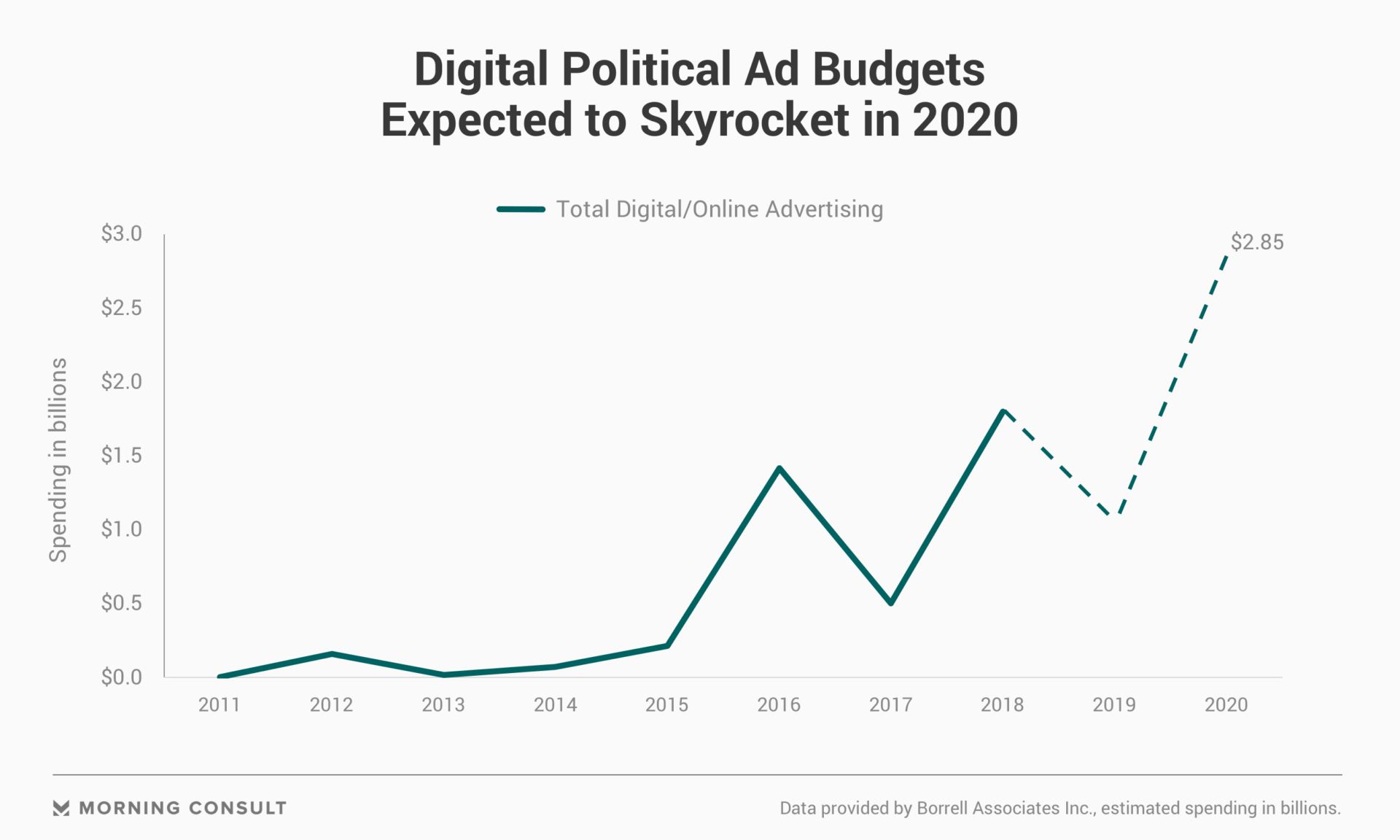 For many agencies and media buyers, the forecasted spending increase isn’t so much about getting through to lawmakers and voters in a divided Congress as it is about the buildup to the 2020 election cycle.

Tim Chapman, executive director of the Heritage Foundation’s political advocacy arm, Heritage Action for America, said he expects the organization will spend “significantly more” on issue advertising next year compared to this year, when Heritage Action had more of a personality-driven campaign focus. He said the organization will shift to a more policy-oriented messaging approach in an effort to mobilize districts that the Republican Party lost in the 2018 midterms or where the party is losing voters ahead of the 2020 elections.

In the 2018 cycle, Heritage Action spent $2.5 million combined on digital, print and TV advertising across 12 districts in a candidate-focused ad run. A spokesperson declined to provide figures on overall issue ad spending.

Next year, “you’ll see lots of focus on the actual policies, lots of messaging around the policies and not making them about the horse race or the personalities and things like that,” Chapman said. Heritage’s issue ads strategy will most likely revolve around “bread-and-butter issues” such as tax policy, national security, the job market or health care spearhead campaigns. 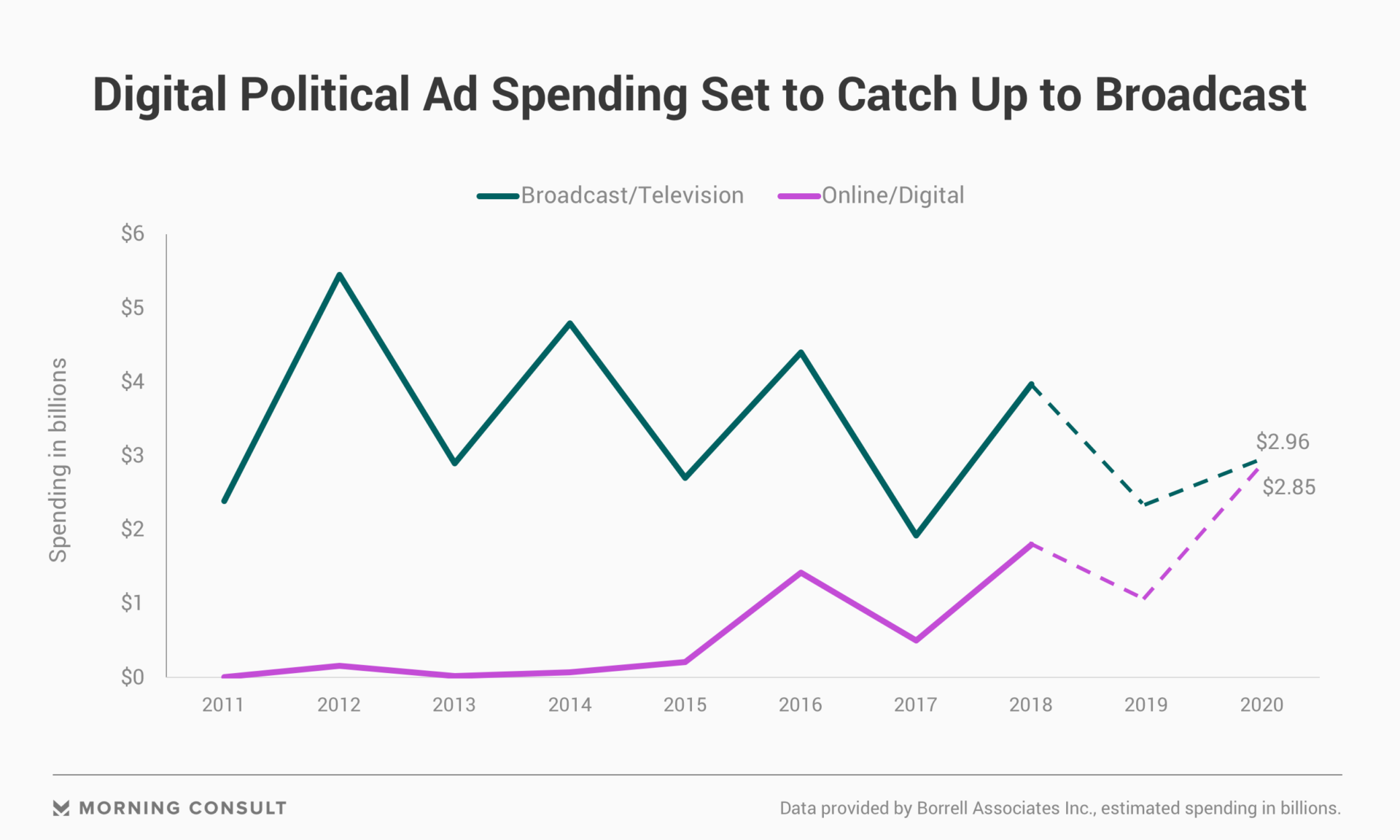 On the other side of the political spectrum, Faiz Shakir, the American Civil Liberties Union’s national political director, said he expects the group to spend more on advertisements focused on broader issue areas, such as LGBTQ rights, criminal justice reform, immigration policy and reproductive health, rather than on specific legislation.

In 2018, the ACLU spent $3.75 million total on paid advocacy ads, which a spokesperson said mostly focused on election advocacy efforts, such as helping people register to vote or reminding them to vote, and not on lobbying specific members of Congress.

Shakir said an uptick in donations since 2016 is allowing the organization to expand its issue ad spending in 2019 from this year’s level.

“I can imagine increasing some degree of spending, but not necessarily on targeted ads or wins, but rather on the longer arc of possibly changing hearts and minds in this direction and possibly winning future fights,” Shakir said, noting ACLU’s short-term ad campaign is driven largely by the news cycle.

Annie Levene, a partner at Washington-based Rising Tide Interactive, which works with Democratic politicians and advocacy groups, said the momentum behind the expected increase in spending comes from the Democratic Party’s upset in the 2016 election — at least on the left. Rising Tide Interactive reported nearly $21.7 million in payments in the 2018 election cycle, making it the second-highest paid online media vendor in the time period, according to OpenSecrets.org, following Bully Pulpit Interactive LLC.

“I don’t think you’re going to see any advocacy groups take their foot off the pedal just because we have a Democratic House in Congress,” Levene said, adding that Democratic supporters were more fired up to donate to left-leaning causes after the 2016 campaign.

Nick Everhart, the founder and president of Content Creative Media, a Republican advertising firm based in Columbus, Ohio, said in an email that narrow GOP Senate margins and forthcoming redistricting in 2020 will be some of the leading causes for spending rises in the 2019-2020 election cycle.

The predicted increase in off-year political ad spending could be the result of a more polarizing political climate, said Diana Owen, a political science professor at Georgetown University, noting that it’s easier than ever to target specific voters and constituencies because of advanced digital advertising tools and because people tend to reside in their own online bubble.

“In running issue ads, it’s easier, in a certain sense, to identify and stake out your constituency through ads than it is in a time when we have more political agreement or less polarized politics,” she said.

Rory Cooper, a managing director at Purple Strategies, said rolling out an advocacy campaign in such a political climate requires a more fragmented approach.

He said rather than focusing on placing ads in Washington aimed at Capitol Hill, an advocacy group could instead shift its target to a lawmakers’ constituencies in other regions.

But Cooper said advocacy groups and companies looking to launch issue ad campaigns shouldn’t have to change their message focus just because of the makeup of the year’s congressional leadership.

“More important to appealing your message to the partisan message of the day is to be authentic to what your voice normally is,” he said.

Correction: A previous version of this story misspelled the name of the firm that works with Democratic politicians and advocacy groups, Rising Tide Interactive.