A pharmacy technician grabs a bottle of drugs off a shelve at the central pharmacy of Intermountain Heathcare on Sept. 10, 2018. in Midvale, Utah. (Photo by George Frey/Getty Images)
By Yusra Murad

A Republican-led White House and Senate, a Democratic House majority and the American public usually have their eyes on different health-related priorities — but heading into 2019, all sights are set squarely on the rising cost of prescription drugs.

While pharmaceutical companies turn staggering profits, Americans often face higher prices for their medications compared to patients abroad. The cost of prescription drugs has become a critical issue for voters, driving people to the polls during the midterm elections and unveiling a rare opportunity for bipartisanship.

The laser focus on drug prices may appear disproportionate at first glance. Prescription drugs are not the main driver of health spending in the United States, amounting to 10 percent of total health spending last year — shy of the cost of hospital care or physician and clinical services. 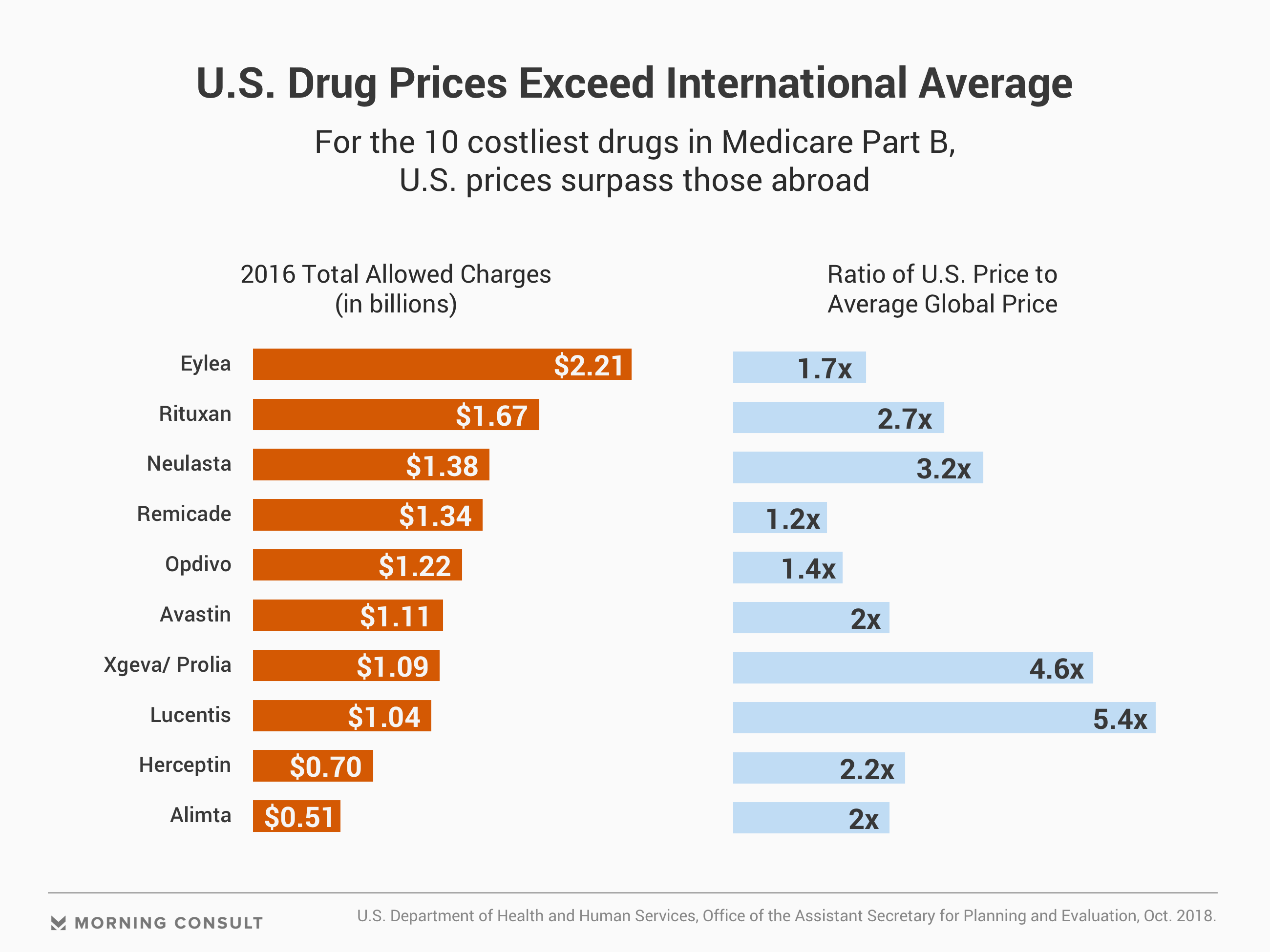 The administration has zeroed in on the issue due to international differences in prices and the perception that Americans are getting a bad deal, said Matt Brow, president of Avalere Health.

Given Democrats’ vow to expand access to health care and Republicans’ reverence for bolstering competition and the free market, analysts expect much of drug pricing policy in 2019 to focus on strategies that reduce market inefficiencies that underlie soaring costs — Medicare price negotiation, intervention against potential patent abuse and giving insurers a critical tool for buyers: the freedom to say no.

Rep. Peter Welch (D-Vt.), co-chair of the Affordable Prescription Drug Task Force, said he was confident the group can find common ground with the Trump administration on some principal areas — including reference pricing.

The Centers for Medicare and Medicaid Services’ International Pricing Index, proposed in October, would match the price Medicare pays for Part B drugs with price tags in comparable nations — an overhaul of the current system, which requires the federal government to dole out the average sales price for a medication. Although these prices reflect private-sector negotiations, Medicare often fails to net discounts for drugs lacking competition.

CMS Administrator Seema Verma heralded the index as a model that would “for the very first time introduce competition in Medicare Part B.” CMS is considering issuing a proposed rule in the spring. The demonstration project would launch in spring 2020 and be mandatory for half the country’s providers.

“It’s a plausible way to back into doing something serious on price, because we certainly have the technical ability to take on prices, but I don’t think we have the political ability,” Bach said.

While the demonstration project doesn’t require congressional approval, the Affordable Prescription Drug Task Force is eyeing other proposals that do — such as introduced legislation allowing the Health and Human Services Department to negotiate bulk price discounts with manufacturers for drugs covered under the Medicare Part D program, Welch said.

Welch predicts some of the drug pricing proposals have a good chance at garnering support from both sides of the aisle in the House — Republican Rep. Francis Rooney (Fla.), for example, co-sponsors the Medicare negotiation bill.

“Republican individual members are hearing the same thing from their constituents that we are: The price of prescription drugs is killing them,” Welch said. “In the past, Paul Ryan refused to allow us to bring to the floor any one of these bills for a vote — the dynamic really changes with the Democratic majority.”

For drugs on the Part D side, analysts expect the administration to focus on eliminating incentives that result in drugs with high list prices and high rebates — commonly referred to as the gross-to-net bubble. The key issue with the current system, according to Avalere’s Brow, is that it motivates plans and plan sponsors to choose more expensive drugs, on net, if the rebates and list prices are higher than alternatives.

The administration’s most recently proposed rule concerning drugs covered by Medicare Part D gives insurers more flexibility to manage drugs within six so-called protected classes, such as antidepressants, antipsychotics and some cancer treatments. The new rule would permit Part D sponsors to exclude protected class drugs in certain cases — for example, if its price increased at a race outpacing inflation.

Patient advocacy groups fear the proposal may rob some patients of their preferred medications if their plans refuse the price offered by drugmakers — but analysts note that under the status quo, patients are at the will of the industry.

“If we want to have pharmacy benefit managers or Part B plans be able to negotiate for drugs, the critical part of all negotiation is being able to walk away,” Bach, from Sloan Kettering, said. “If you make a plan a mandatory buyer, you put the seller in complete control of the price.”

If we want to have pharmacy benefit managers or Part B plans be able to negotiate for drugs, the critical part of all negotiation is being able to walk away.

Some Democrats, dubious about moving Senate Republicans on altering Medicare’s payment structures, have turned to what they see as another culprit in rising costs: the ability of drug companies to take advantage of patents and push lower-cost generics to the margins.

Legislation to combat patent abuse in the House, introduced by Rep. David McKinley (R-W.Va.), has some bipartisan support — as does legislation to empower generics on the Senate side. A bipartisan bill introduced in January 2017 by Sen. Chuck Grassley (R-Iowa) and Sen. Amy Klobuchar (D-Minn.) aims to expedite consumer access to generic drugs by cracking down on deals between brand-name and generic drugmakers that delay generic drugs’ entry to the market.

Some critics of any legislation that would seek to elevate generics and crack down on patent abuse warn of potentially eroding the innovative spirit that drives research and development of advanced drugs, but as Bach noted, without a value-based system matching higher prices with better outcomes, the status quo may not be “incentivizing the type of innovation we desire.”

A spokesperson from the Pharmaceutical Research and Manufacturers of America said the group will continue to work with policymakers to find a solution that protects patient safety and also facilitates generic competition.

Even with bipartisan support for reducing drug costs, the road to bipartisan action is paved with congressional gridlock, and bold proposals such as Medicare negotiation or targeting patent abuse are sure to face opposition. Price transparency initiatives supported by the administration — such as requiring drugmakers to include list prices in advertising and providing real-time cost information to physicians as they write prescriptions — are more likely to brave the storm.

Ultimately, if the government is going to emerge as a buyer in the market, it has to strike a balance between cultivating a competitive environment that rewards innovation, and providing patients with access to medications that enhance and extend their lives, Brow said, while paying the appropriate price for those outcomes.

“The complexity of creating an environment like this would be massive even if starting from scratch; cobbling it together from the existing landscape is even more so.”