Fans look on during the FACEIT ECS Season 6 finals between Astralis and MIBR on November 25, 2018 in Arlington, Texas. (Photo by Cooper Neill/Getty Images)
By Sam Sabin

The explosion in esports’ popularity lies in its ability to transcend categories: It’s a sport; it’s a broadcast event; it’s gaming. Esports’ category-defying quality allows it to appeal to a wide range of viewers, but that same characteristic also makes it difficult for brands looking to market to this rapidly growing audience.

Measuring a TV audience is straightforward, with measurement companies and marketers following agreed-upon definitions for age groups, such as 18-29, and television ratings. Esports marketing, however, relies heavily on in-house audience metrics from marketing agencies and streaming platforms rather than an industry standard. This makes it challenging for marketers to determine who exactly makes up the esports viewership and potentially misrepresents opportunities available to advertisers in an industry that reached $1.6 billion in U.S. ad revenue in 2018 and is projected to reach $2.054 billion by 2022, per PwC data.

Nielsen Holdings PLC, for example, puts esports watchers’ average age at 25, according to the latest Nielsen Esports Fan Insights data. Interpret, a California-based market researcher, instead uses a range of 25-34.

Surveys generally report esports audiences as mostly male, but that share ranges from 66 percent to 87 percent as some reports include under-18 viewers. The largest share of viewers make less than $50,000 per year, according to two reports, including a Morning Consult survey conducted Dec. 13-14 among 1,361 adults who have heard of esports. In comparison, most esports viewers have an average income of $69,900, according to Nielsen.

It’s possible that the data in these different reports ultimately paints the same picture when it comes to the esports audience, but it’s difficult to know for sure when there’s no standardized yardstick. Disparities in how research firms measure and define the audience are to be expected without a universal process, said Scott Debson, executive vice president of strategy at marketing agency Engine Shop LLC.

“Any time there’s a new platform, it takes the industry a little bit of time to catch up,” Debson said. “Everyone is making up their own way of measuring gaming. They’re trying to figure it out.” 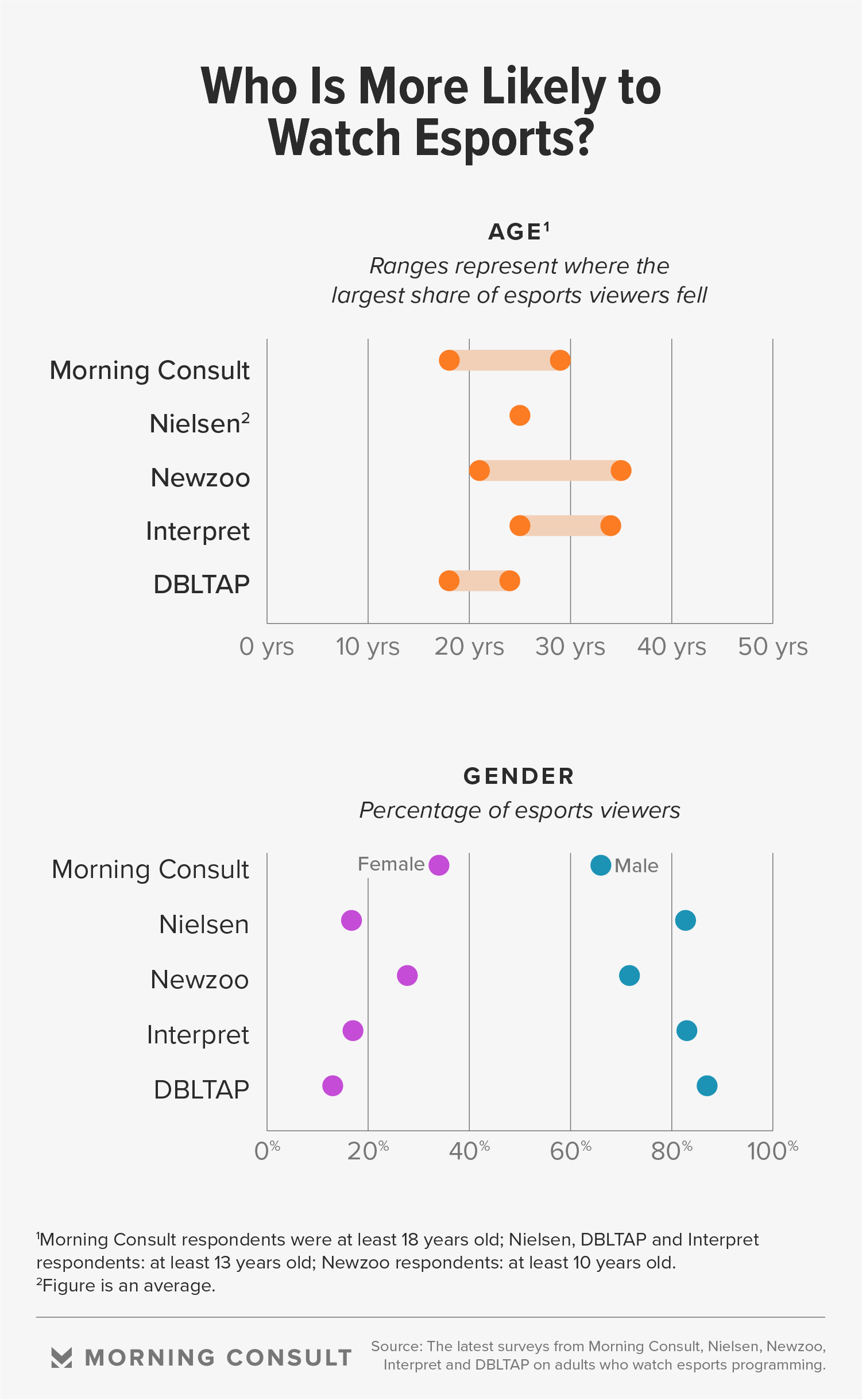 Brands interested in the space want data that’s equivalent to what they would get if they were planning a television buy — placing a heavy emphasis on how many people will be watching a tournament and who they are, according to Jamie King, Engine Shop’s head of esports. King said a lot of marketers enter the space looking for an esports equivalent to Nielsen’s television ratings. So far, esports has attracted a wide range of brands, from Geico Corp. to Red Bull GmbH to McDonald’s Corp. Nielsen started its own esports research vertical in August 2017; however, its viewership measurement tools are continuously being built up because of the esports industry’s relative newness.

Nicole Pike, Nielsen Esports’ global managing director, said in a statement that more brands are reaching out to the company to find ways to compare esports viewership to traditional Nielsen ratings metrics. Nielsen has suggested to its esports advisory board that it add metrics such as “average minute audience” to help “put esports in a more TV-friendly currency,” Pike said. For those brands seeking to advertise in esports, the hope is that Nielsen will create the measurement standards they need.

Even so, King said a metric such as a TV rating doesn’t paint a holistic picture of the ad opportunities available to marketers in esports — which could include tournament sponsorship, esports player marketing deals or advertising in-person at gaming conventions.

“It’s hard to look beyond sponsorship metrics or the traditional media buy,” King said of new esports marketers. “Really what we’re talking about is a 360-degree marketing engagement activation.”

That’s why it’s best to approach esports marketing similarly to any other sports marketing strategy, rather than as a straightforward video game play, said Dan Ciccone, co-founder and managing director of REV/XP, a Chicago-based dual esports talent management and marketing agency.

“There’s still a lot of confusion in the marketplace about gaming, so we present it more through the lens of sports, and it is much easier for brands to relate to and catch on to,” Ciccone said.

There’s still a lot of confusion in the marketplace about gaming, so we present it more through the lens of sports, and it is much easier for brands to relate to and catch on to.

Rishi Chadha, head of gaming content partnerships at Twitter Inc., said marketers aren’t the only ones at a disadvantage because of the lack of standardization: Platforms such as Twitter, tournament operators, publishers and esports teams are also impacted.

“The teams get hurt worse because they have to take and aggregate their stats reached by platform and then share those with advertisers,” Chadha said. “And then an advertiser doesn’t necessarily know if those make sense.”

While Twitter’s business relationship with esports is relatively new, Chadha said gaming and Twitter have always gone hand-and-hand, with the platform serving as a home for the community to discuss and respond to different events. Now, as Twitter forges ahead into esports, including partnerships with brands to livestream or share content around esports programs, most businesses are coming to Twitter for partnership opportunities to build more awareness.

Once a brand has decided to advertise in esports, King said, it faces another hurdle: the challenge of marketing authentically to a group that’s built its entire industry up without the help of outside entities.

“This is an audience that has built all of this organically amongst themselves, so they feel a lot of ownership. They’ve also done it without anybody’s help,” King said. “That has been a huge barrier to entry.”

King said Nielsen’s efforts have attracted a lot of interest from the esports community as the measurement company tries to drive standardization of the metrics.

“Esports, as an industry, is very young, and there are a lot of touch points that aren’t quite brushed out yet, but they’re going to be,” he said. “The industry has gotten to the point where everyone would like that standardization on the metrics, and it really does come down to clarifying the value through the livestream platforms in the same way they’ve been able to do that for traditional video and television.”

Related: As Esports Grows Up, So Does Its Advertising
Advertising Esports Social Media Sports Marketing Viewership