Two of them represent districts won by Hillary Clinton in 2016 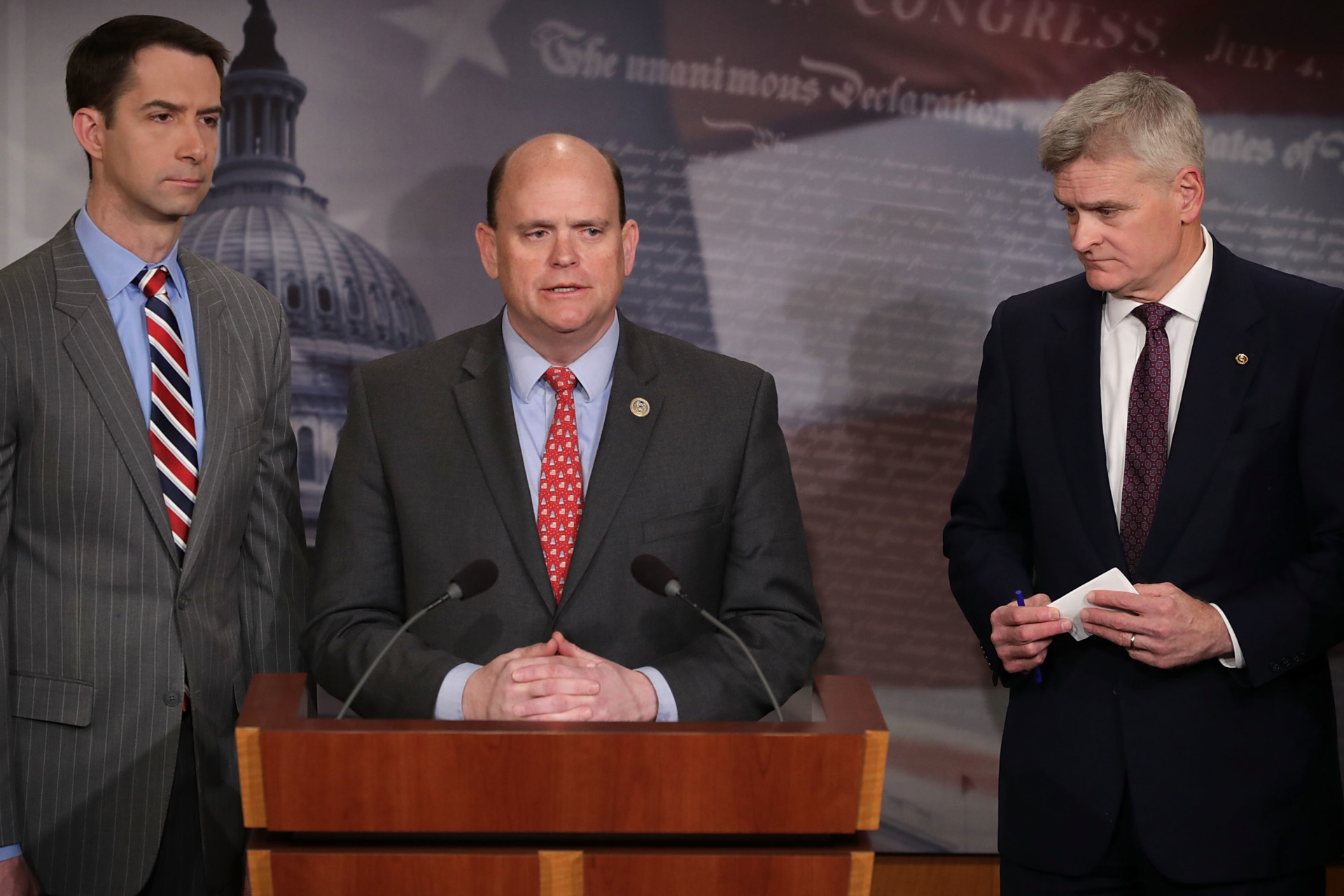 Rep. Tom Reed (R-N.Y.) speaking at a news conference with Sens. Tom Cotton (R-Ark.), left, and Bill Cassidy (R-La.) in Washington in March 2018. Reed was one of three GOP lawmakers to back a House resolution affirming the House Counsel’s authorization to intervene in the Affordable Care Act lawsuit in Texas. (Photo by Chip Somodevilla/Getty Images)
By Yusra Murad

In a 235-192 vote, the House of Representatives voted in favor of a standalone resolution affirming the House Counsel’s authorization to intervene as a defendant in the Affordable Care Act lawsuit to secure its protections for people with pre-existing conditions. Of the lone three GOP members to break from their party and support the resolution — Reps. Tom Reed (N.Y.), John Katko (N.Y.) and Brian Fitzpatrick (Pa.) — the latter two represent districts carried by former Democratic presidential nominee Hillary Clinton in 2016.

The House had already approved intervention by including it in the rules package passed last week, as many Republicans noted on the House floor, but the resolution isolating the matter provided the Democratic majority an opportunity to put GOP members on the books about health care for the first time in the 116th Congress. And given that several Republican members campaigned heavily on upholding protections for pre-existing conditions, Democrats repeatedly framed the resolution as a referendum on these protections.

But the GOP didn’t see this vote as being related to pre-existing conditions at all, said Christopher Holt, director of health care policy at the American Action Forum, the policy arm of a political group aligned with House Republican leaders.

“This was a messaging vote, and both sides will frame it one way or the other,” said Holt, a former legislative assistant for health care policy to former Sen. Scott Brown (R-Mass.) and health policy adviser for several Republican members. “Certainly, Republicans don’t see their vote here as being a vote against protecting people with pre-existing conditions.”

Fitzpatrick hails from Pennsylvania’s 1st District, where Clinton beat Trump 49.1 percent to 47.1 percent. In a statement last week, he said he approved the rules package because it allows the House to defend Americans with pre-existing conditions, and Democratic leadership must use this authority to protect those patients.

“I continue to strongly oppose the attempt to dismantle the Affordable Care Act in federal court, which threatens patient protection provisions,” he said in the statement.

Reed is from New York’s 23rd District, where 54.5 percent of voters backed Trump, compared to 39.7 percent for Clinton.

Legal experts and scholars are skeptical of the vote’s significance beyond ceremonial value for House Democrats. Arthur Tacchino, chief innovation officer at Affordable Care Act compliance company SyncStream Solutions LLC, said while the intervention from the legal counsel could help defend the constitutionality of the ACA during the appeals process, today’s vote was principally about political maneuvering.

Health care will surely play a central role in the 2020 elections, Tacchino said, and Democrats can use this — and future legislation seeking to cement the sanctity of the ACA — as legal fodder.