Ocasio-Cortez won’t rule out inclusion of nuclear, but some see sector as incompatible with ‘100% renewable’ focus 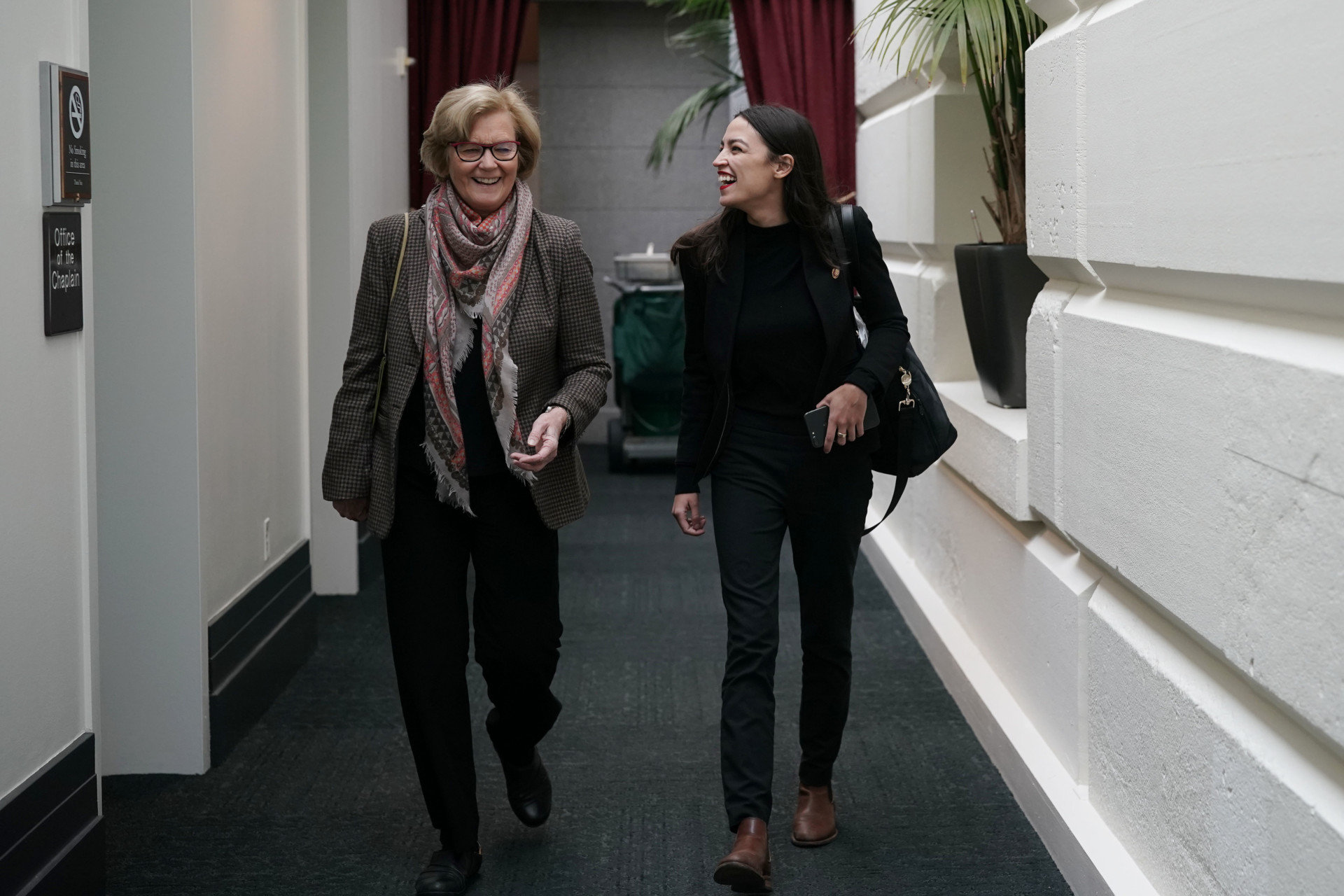 Lawmakers embracing a transition to 100 percent renewable energy under a Green New Deal have largely left out mention of whether nuclear energy should be included in such a policy package. While Rep. Alexandria Ocasio-Cortez, one of the Green New Deal’s biggest proponents, said she hasn’t ruled out nuclear energy from the platform, other advocates on the left hold long-running concerns that appear to lessen nuclear’s chances of inclusion in the deal.

Rep. Chellie Pingree (D-Maine) is one of over 40 lawmakers who have issued their support for Green New Deal concepts championed by the freshman Democratic representative from New York, who has floated a draft resolution that calls on lawmakers to work toward supplying 100 percent of U.S. power demand from renewables, building a national smart grid and putting money toward a drawdown of greenhouse gases.

“I think on nuclear energy, we all have a general resistance to it,” Pingree said, because of the unsolved quandary of how to deal with nuclear waste, along with remaining environmental and safety issues. “We all think of Japan.”

For her part, Ocasio-Cortez is holding back from stating a firm position on including nuclear energy in a Green New Deal.

“It’s not something that we’ve just ruled out,” Ocasio-Cortez said Thursday.

Supporters of the initiative’s top goal, she said, is to reach zero percent carbon emissions. Debate over nuclear energy is ongoing, and “we’re monitoring that debate and seeing where we can land,” she added.

Corbin Trent, communications director to Ocasio-Cortez, acknowledged that nuclear energy is a zero-carbon resource, but added, “We’re looking for 100 percent renewable, as well” — a qualification that would not include nuclear power.

The Sunrise Movement, an environmental group formed in 2017 that has taken up the Green New Deal cause and staged climate protests last year outside the office of now-House Speaker Nancy Pelosi (D-Calif.) is still “working on a policy outline for what a Green New Deal includes and are consulting with experts and other organizations to develop that,” said Stephen O’Hanlon, who handles communications for the group, in an email. That plan will be ready soon, he said.

If the rest of the environmental community is any indication, nuclear’s outlook in a Green New Deal is even grimmer. The Green Party of the United States’ Green New Deal calls for a full phaseout of U.S. nuclear power. And on Thursday, hundreds of environmental groups wrote an open letter in support of a Green New Deal that supports transitioning completely away from nuclear, along with biomass resources and large-scale hydropower.

Mike McKenna, a Republican strategist who worked on President Donald Trump’s Energy Department transition team, said there is “zero chance” of nuclear getting into a Green New Deal.

“Your run-of-the-mill environmentalist grew up opposed to nuclear, and until something forces a reassessment of that, they’re not going to change,” he said.

Yet those thinking about the format of a Green New Deal have not all written off nuclear entirely. In September, Data for Progress, a progressive think tank that backs the idea of a guaranteed green energy job, issued a report articulating one vision of how a Green New Deal could work that included both nuclear energy and carbon capture technology as part of a 100 percent clean and renewable energy mix.

Greg Carlock, Data for Progress’ Green New Deal research director and lead author of the report, said that the priority in the current energy environment “is getting the carbon-based fuels off the grid as soon as possible. The question, he said, is whether nuclear has a future in the United States that would resolve concerns such as the placement of nuclear plants historically around minority communities, concerns among environmental and indigenous groups about nuclear-related extraction and the nuclear waste issue.

While nuclear power might be anathema to some staunch Green New Deal proponents, nuclear has the support of other lawmakers working on climate and energy policy who have not embraced the Green New Deal resolution.

Rep. Bobby Rush (D-Ill.) who is likely to chair the House Energy and Commerce Committee’s Energy Subcommittee, “believes it would be extremely difficult to meet the carbon emission reduction targets that scientists are telling us we must achieve if nuclear energy is not part of that mix,” said Ryan Johnson, Rush’s communications director, in an email.

Nuclear advocates still have hope for broader support in Congress for the energy source. John Kotek, the Nuclear Energy Institute trade group’s vice president of policy development and public affairs, pointed to what NEI says is a growing recognition among policymakers and climate-focused nongovernmental organizations about the key role nuclear energy plays in a low-carbon energy mix in the United States. Lawmakers also passed legislation with bipartisan support in the last Congress to help facilitate the deployment of advanced nuclear concepts, and additional bipartisan legislation is on the table.

“I think as policymakers really start digging into the details of what would it take to incentivize a transition to a cleaner energy system, nuclear is going to be on that list of options that are encouraged and incentivized,” said Kotek.