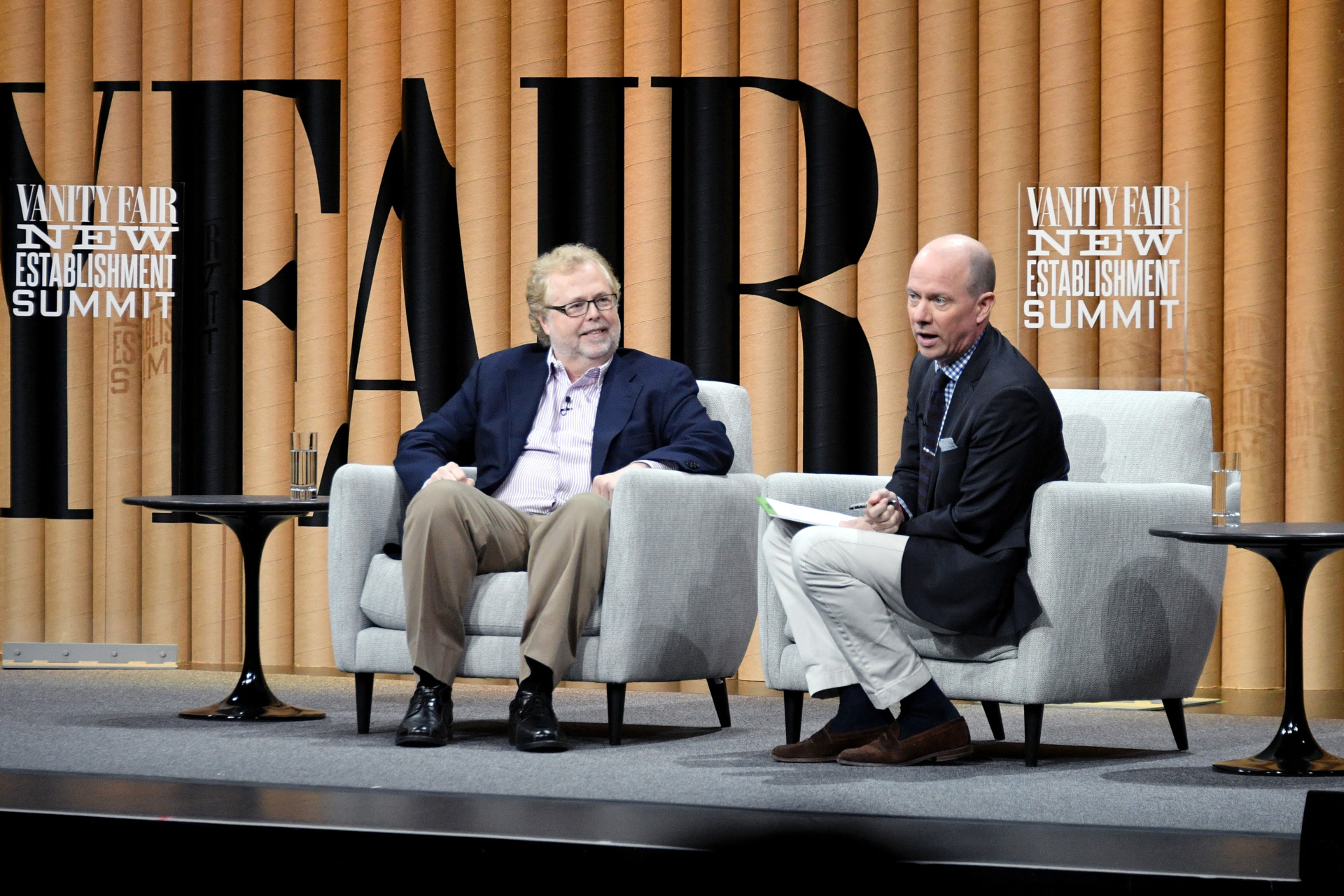 Nathan Myhrvold, left, with Sam Sifton of The New York Times at at the Vanity Fair New Establishment Summit in San Francisco in October 2016. Myhrvold is expected to speak at the Nuclear Regulatory Commission’s annual Regulatory Information Conference in March in Washington. (Photo by Mike Windle/Getty Images for Vanity Fair)
By Jacqueline Toth

In a change from recent years, the Nuclear Regulatory Commission’s annual Regulatory Information Conference will feature a speaker from the industry.

Nathan Myhrvold, board vice chairman at Bellevue, Wash.-based nuclear company TerraPower LLC, is expected to address the conference being held March 12-14, according to a Washington-based nuclear expert.

The decision to host a speaker from an advanced nuclear company comes as the NRC increasingly engages with advanced nuclear developers and directs some of its resources toward application and pre-application work for newer nuclear designs, such as those of NuScale Power LLC and Oklo Inc. The NRC also issued guidance last spring related to non-light water reactor licensing and is involved in the nuclear utility-led Licensing Modernization Project, which is examining licensing issues for non-light water reactors.

A spokesman for Intellectual Ventures Management LLC — the company Myhrvold founded in 2000, where he serves as chief executive — declined to confirm whether Myhrvold is participating in the conference.

Marcia Burkey, chief financial officer of TerraPower, said through a TerraPower spokeswoman Thursday that the company is pleased Myhrvold “can bring some fresh perspective to the nuclear community from his successes in other fields.”

“The NRC is doing a great job and bringing in new voices to encourage the nuclear community’s transformation,” Burkey added.

An NRC spokesman said the commission is still finalizing the conference agenda and will release it when completed.

In the past, the conference’s opening session normally featured introductory remarks from the director of the Office of Nuclear Reactor Regulation, with a keynote from the chairman, additional remarks from the executive director of operations and plenaries from the other NRC commissioners. This year, NRC Chairman Kristine Svinicki and Margaret M. Doane, executive director for operations, are scheduled to speak, and the other four commissioners will be expected at additional plenary sessions, according to a conference invitation letter.

But a tentative program agenda posted to the NRC’s website lists an unidentified “Special Guest Speaker” scheduled to talk just before lunch.

The 2017 Regulatory Information Conference also featured a “special guest plenary session,” with guest speaker Ret. Adm. Robert F. Willard, president and chief executive of the Institute of Nuclear Power Operations, an Atlanta–based nonprofit organization created by the nuclear power industry focused on safety and reliability. But a review of other recent Regulatory Information Conferences indicates that solo external featured speakers are an anomaly at the event.

Myhrvold is a former chief strategist and chief technology officer of Microsoft Corp., whose co-founder Bill Gates is also TerraPower’s board chairman. TerraPower is working on both a traveling wave reactor, which could use depleted uranium as fuel, and a molten chloride fast reactor that could have additional uses in markets for process heat and thermal storage.

TerraPower executives have been active lately on the nuclear conference circuit. Myhrvold gave a keynote address at the opening plenary morning session of the Pacific Basin Nuclear Conference in San Francisco, hosted by the American Nuclear Society, that ran Sept. 30-Oct. 4. And TerraPower Chief Executive Chris Levesque spoke at the Nuclear Energy Institute’s Nuclear Energy Assembly in May 2018 in Atlanta.

At the time, Levesque said TerraPower’s traveling wave reactor was moving from research to testing and hoped to get regulatory approval from the NRC or from China’s National Nuclear Safety Administration. But the project suffered a setback when the United States set new export restrictions on nuclear technology shipments to China over national security concerns; Gates called the joint venture with China “unlikely” to proceed and is hoping for domestic regulatory changes to make it possible to build the reactor in the United States.