Plurality Thinks There Are Enough Diverse Roles in Hollywood 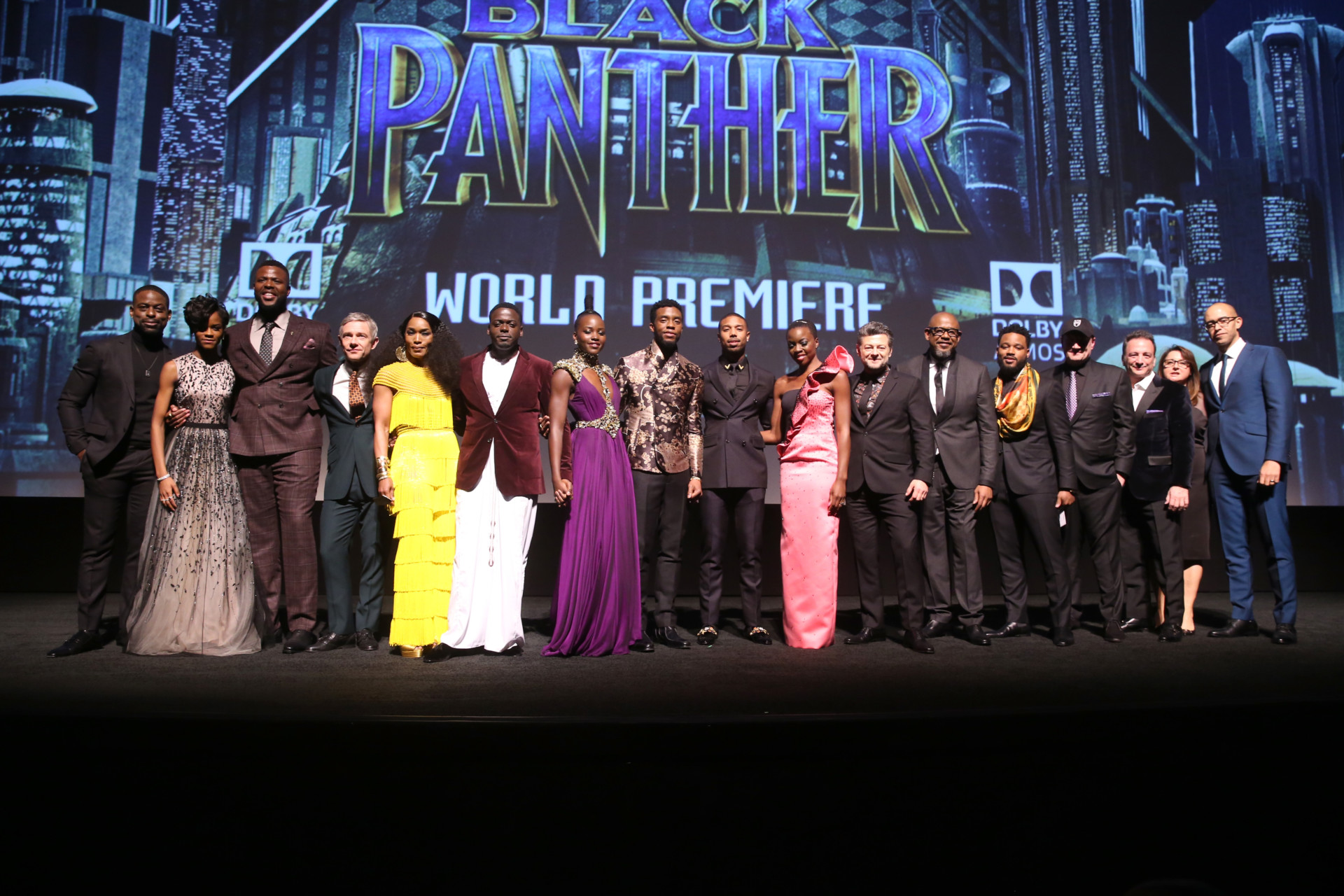 Diversity has been a favorite buzzword for Hollywood over the past few years, in relation to both recent films with a majority nonwhite cast (“Crazy Rich Asians,” “Black Panther”) and efforts to hold the industry accountable for its perceived lack of racial inclusivity (#OscarsSoWhite, #LatinosLeftOut) — and a new poll shows that a plurality of Americans think there’s enough opportunity for diversity in the entertainment industry.

A Jan. 10-13 Morning Consult/The Hollywood Reporter survey of 2,201 U.S. adults finds that 42 percent of adults say there are a sufficient number of acting roles for racially diverse people while one-third of adults disagree. 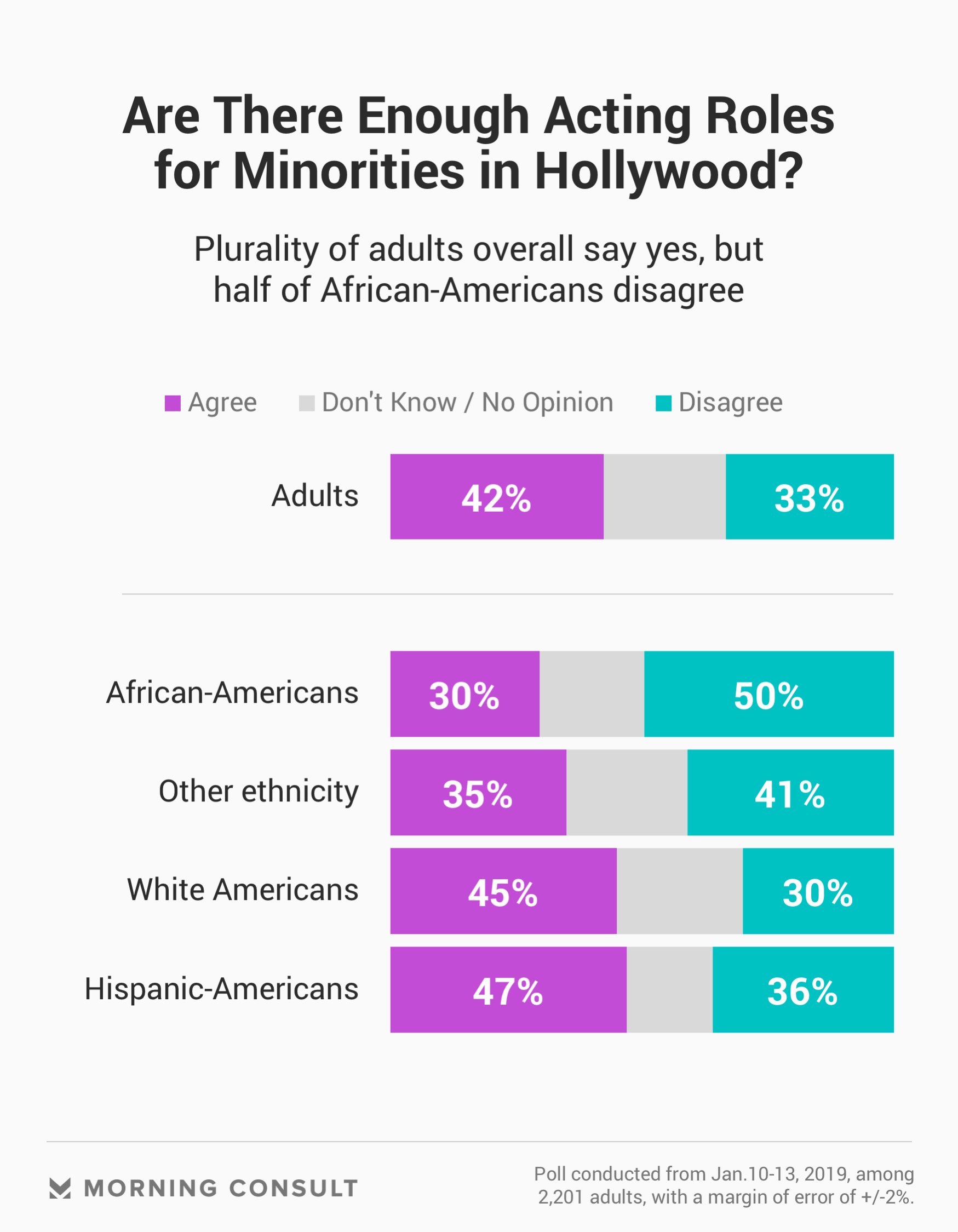 Stacy L. Smith, an expert on entertainment and media portrayals, and members of the Annenberg Inclusion Initiative examined 1,100 popular films from 2007-2017 and found that more than 70 percent of characters were white, while 12.1 percent were black. A study from the Geena Davis Institute on Gender in Media determined that of the top 100 family films (movies rated G, PG or PG-13) released between 2007-2017, 16.7 percent of leads were people of color.

Five of the 20 nominations for acting roles in this year’s Academy Awards went to racial and ethnic minorities, compared to four last year.

Recent films, including Oscar Best Picture nominees “Black Panther” and “Get Out,” have highlighted how films about people of color, directed by people of color, can receive critical acclaim and major box office sales. Rashad Robinson, president of Color of Change, the nation’s largest online racial justice organization, said that as these films and their directors find success, they help pave the way for more diverse content.

The Inclusion in the Director’s Chair report from University of Southern California Annenberg that came out this month shows that from 2007 to 2018, out of 1,335 directors studied, 80 were black. But inclusion has increased: Sixteen black directors worked on the top 100 highest-grossing films in 2018, compared to 6 in 2017.

A 38 percent plurality said there are a sufficient number of acting roles for members of the LGBTQ community. And, according to recent reports, LGBT individuals actually have disproportionately high representation on the small screen: The number of LGBTQ series regular characters on primetime scripted broadcast shows has increased to a record high 8.8 percent in the 2018-2019 television season, according to GLAAD’s annual “Where We Are on TV” report — nearly twice the share of adults who identified as LGBT in 2017, according to a Gallup survey.

Numbers of LGBTQ characters on cable and streaming services are also increasing thanks in part to shows such as FX Networks’ “Pose,” which received two Golden Globe nominations and according to producer Ryan Murphy featured the largest cast of regular trans actors in a U.S. television series.

“I have not seen any industry change its diversity practices simply on a hope and a wish,” Robinson says. “They have to put the same type of rigor that they put into making money, into everything else.”

To push for more diversity in Hollywood, Robinson suggests setting benchmarks for diversity, as well as providing tax credits with diversity clauses and inclusion riders, as potential improvements.

Inclusion riders, or clauses in contracts that require certain levels of diversity on a project, have been promoted at awards shows by actresses including Frances McDormand and Regina King. A 43 percent plurality of white Americans, along with half of African-Americans and Hispanic-Americans, support inclusion riders.