A general view at US Weekly's Hot Hollywood 2009 party at Voyeur on November 18, 2009 in West Hollywood, California. (Photo by Christopher Polk/Getty Images for US Weekly)
By Sarah Shevenock

Grocery stores, drug stores and even libraries boast racks of celebrity gossip magazines, with titles such as “Star,” “People” and “Us Weekly” lining the shelves. But despite these publications having a large reach, some of them have seen a decline in readership in recent years, and a new Morning Consult/The Hollywood Reporter poll shows that a plurality of adults don’t think highly of the paparazzi, whose work fills the pages of these magazines.

Forty-four percent of the 2,203 U.S. adults surveyed in the Feb. 1-3 poll view paparazzi photographers as intrusive and think that they “need to get a real job,” with 43 percent saying that the government should be able to regulate paparazzi activities. Most respondents (55 percent) said that the celebrity photographers do not generally act in a responsible and civil manner. 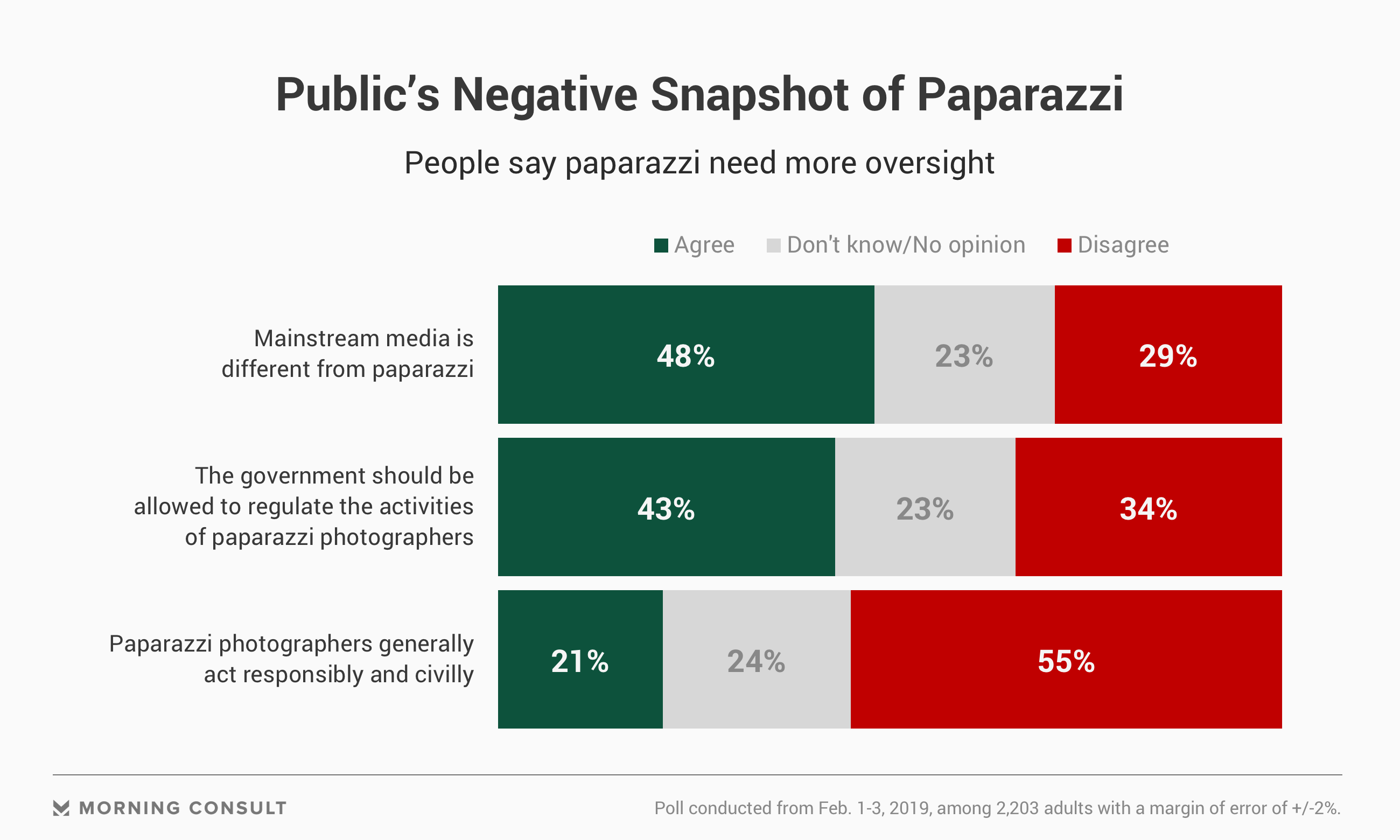 While the public sentiment of the paparazzi isn’t great, it is likely not the sole possibility for why tabloids are seeing a drop in readers.

Francesca R. Dillman Carpentier, the W. Horace Carter Distinguished professor of media and journalism and editor of the academic journal Media Psychology at the University of North Carolina’s School of Media Journalism, said that antipathy toward paparazzi may not necessarily result in avoidance of their work.

“To a certain extent, people can sometimes engage in something while also still having a critical view of that because we tend to be a curious lot, and sometimes our morbid curiosity gets the better of us,” she noted.

In the past, Hollywood celebrities have proposed readership boycotts of tabloids to hold both the magazines and paparazzi accountable.

In 2014, in response to actors Kristen Bell and Dax Shepard’s call for a boycott of media outlets that feature paparazzi photos of children, “Entertainment Tonight,” “Just Jared” and “People” all banned unauthorized photos of celebrity children in their publications. Seventy-one percent of adults said in the poll that it is up to the editors of these tabloid publications to use discretion when purchasing paparazzi photos from photographers who behave irresponsibly.

While American Media Inc. — which owns multiple celebrity titles including “In Touch Weekly,” “Life & Style Weekly,” “Star” and “The National Enquirer” — is a privately owned company and thus not required to publicly report earnings, data from the Alliance for Audited Media and MPA-The Association of Magazine Media can provide context on consumer engagement for these magazines.

The Alliance for Audited Media collects data on average monthly circulation from titles twice a year. Statements show that “In Touch Weekly,” “Life & Style Weekly” and “The National Enquirer” have seen a decrease in total average paid and verified circulation since 2014, as of June 2018. For instance, the monthly average circulation for “In Touch Weekly” dropped by nearly 165,000 magazines in four years, from 431,038 in June 2014 to 266,441 by June 2018.

Since September 2014, MPA-The Association of Magazine Media has used Magazine Media 360°, an industry metric that uses data from third parties, as a means to measure consumer demand for titles such as “People” and “Us Weekly” across multiple platforms, including print and digital editions, websites and social media. This data shows that some titles, including “Star” and “Us Weekly,” have seen declines in Total 360° numbers between November 2016 and November 2018.

But not all celebrity news titles have seen this decline: “People,” for example, a magazine published by Meredith Corp., has seen total average paid and verified circulation increase slightly to 3.4 million magazines as of June 2018 after declining from 2014 to 2016. Total 360° for “People” also increased from 76.5 million in November 2016 to 86.3 million in November 2018.