Beer brand resonated most with viewers, followed by NFL and Pepsi 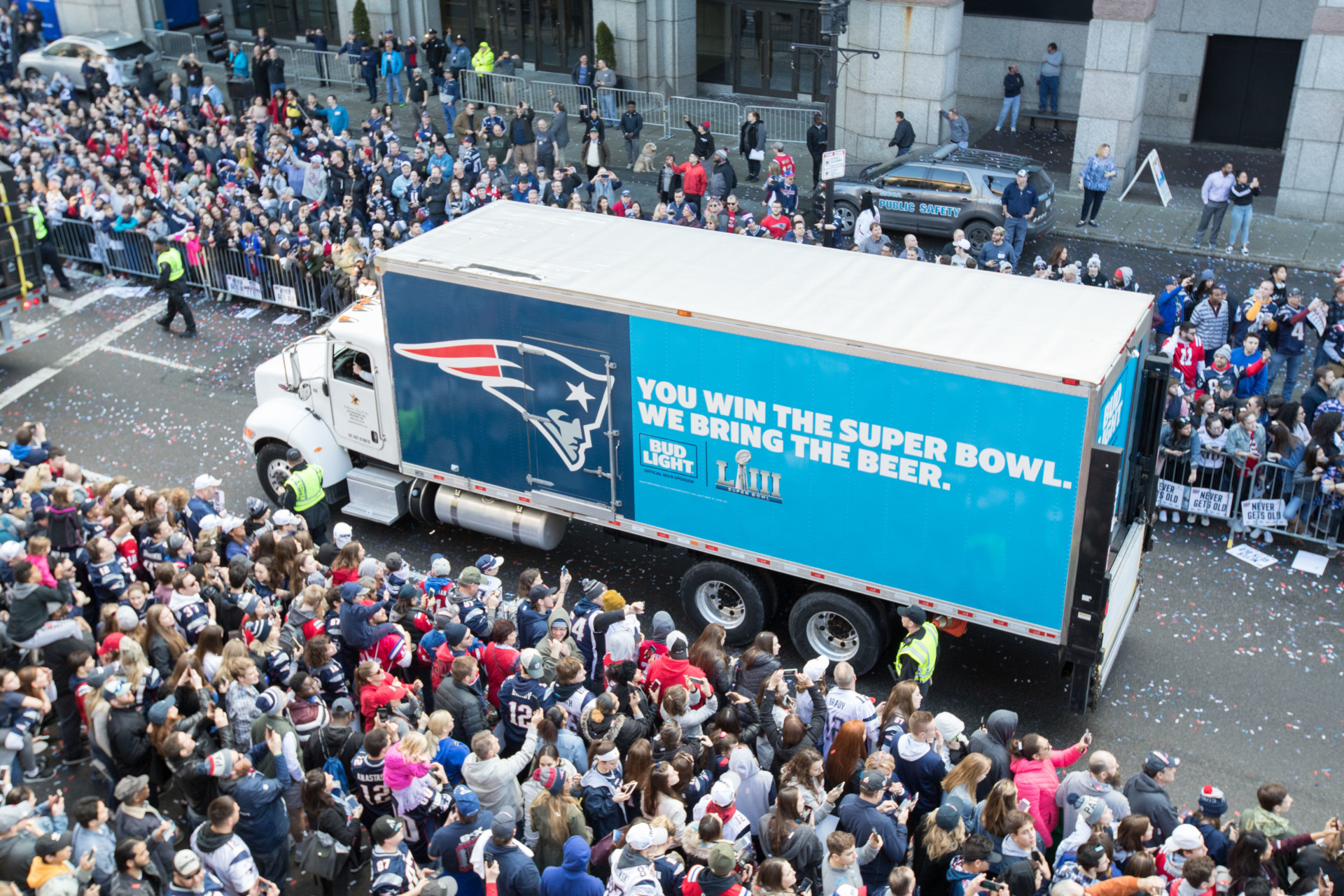 The Bud Light ads were the most memorable of the Super Bowl, per Morning Consult data. (Scott Eisen/Getty Images for Bud Light)
By Mark J. Burns

Anheuser-Busch InBev’s Super Bowl LIII media buy of six minutes and 25 seconds of airtime was the largest in the company’s history, and it looks like it was money well spent.

A new Morning Consult survey conducted Feb. 6-8 found that ads for Bud Light, one of AB InBev’s five advertised brands, registered higher with Super Bowl viewers than any other that aired during the New England Patriots’ 13-3 victory over the Los Angeles Rams on Feb. 3.

Seventy-six percent of the 1,286 U.S. adults in the poll who said they watched the game on CBS — which Nielsen said drew 98.2 million viewers — recalled seeing ads for the beer brand, two of which especially generated buzz online and across social media: a cross-promotional spot with HBO Inc.’s “Game of Thrones” and a 60-second commercial highlighting the brand’s lack of corn syrup as it called out competitor Molson Coors Brewing Co. 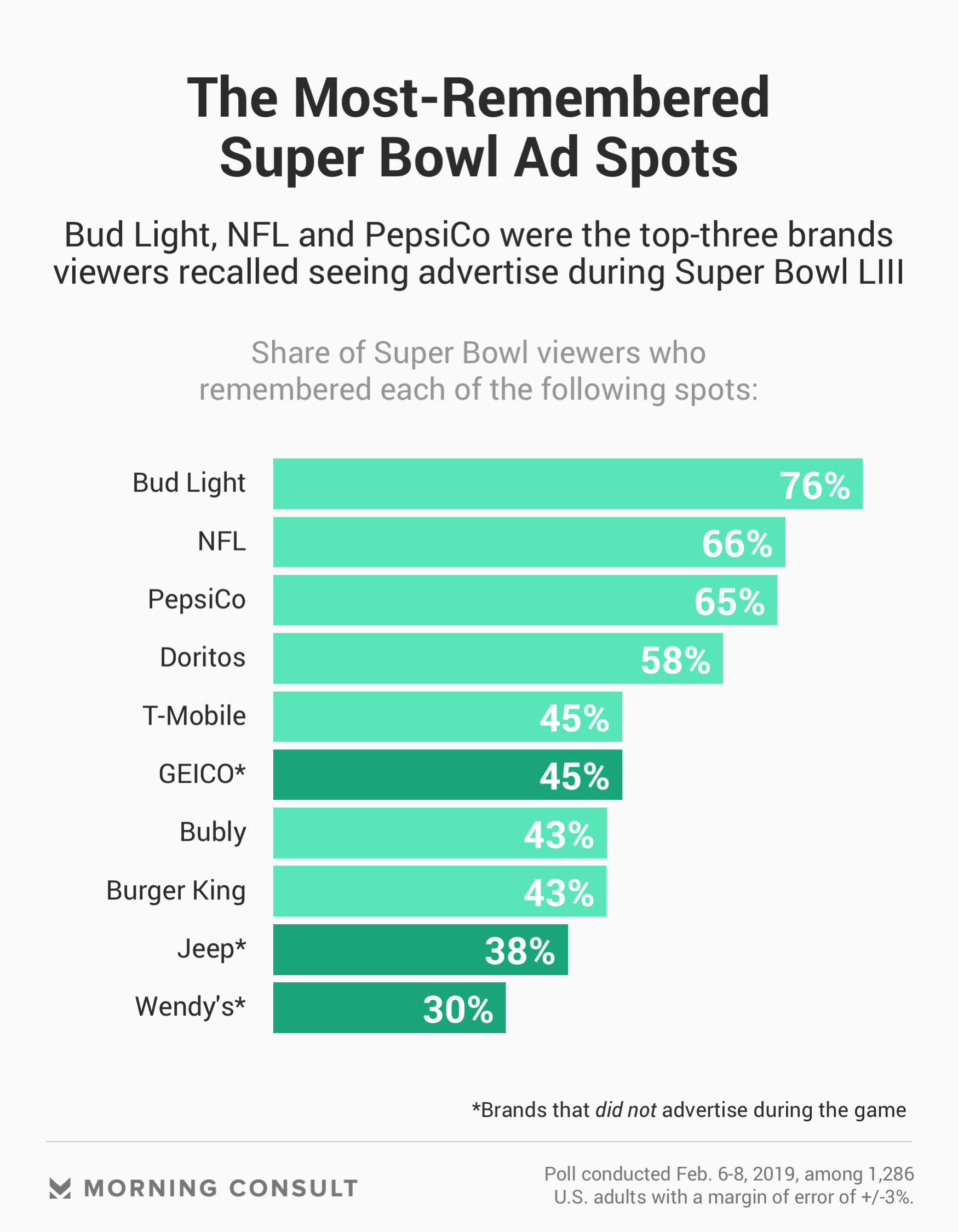 The NFL’s “The 100-year Game” advertisement, which kick-started the league’s celebration of its 100th season in 2019, and PepsiCo Inc., ranked No. 2 and No. 3 at 66 percent and 65 percent, respectively, in resonation for the game on CBS.

Some companies with lower recognition from viewers, such as The Washington Post and Bumble, a female-focused networking and dating app, were first-time advertisers. The newspaper’s ad, narrated by actor Tom Hanks, aired late in the fourth quarter, while the latter had six weeks to create its commercial starring 23-time Grand Slam winner Serena Williams. Others, such as Showtime, had a brief 10-second slow-motion advertisement.

Of the in-game advertisers included in the survey, expense management platform Expensify — which debuted its first-ever television commercial during the Super Bowl — received the lowest recollection from respondents (15 percent).

John Sweeney, head of advertising specialization at the University of North Carolina’s School of Media and Journalism and director of its Sports Communication Program, said the NFL spot stood out from the field.

“It has a lot of the signature players reliving and replaying things about their personality or a famous moment in the sport,” he said of the league’s two-minute advertisement featuring over 40 current and former NFL players. “They could have announced their 100th anniversary in a far-more pedestrian and in a far-less memorable or visible way, so I give them props for that.”

While the critical response to most of the ads run in the game was lukewarm at best, survey respondents compared them favorably to the actual action on the field. Of the 896 people surveyed who said they watched the game — the lowest-scoring in NFL history — and the halftime show, the ads were the winners. Thirty-six percent said the commercials were the best part of the viewing experience, compared with 31 percent who said the game and 23 percent who said the halftime show starring Maroon 5, Big Boi and Travis Scott.

The survey also revealed that there is a limit to viewers’ attention spans. Forty-five percent of Super Bowl viewers said they remembered seeing a GEICO ad, even though the auto insurance company did not run a commercial during the game. It was a similar situation with Jeep. Although the brand broke a record for online views for its parent company, Fiat Chrysler Automobiles NV, during the lead-up to the game, it did not air any TV spots, but 38 percent of viewers still reported seeing one. Both fared better than 10 of the in-game brands highlighted in the survey.

Despite viewers having a tenuous recollection of some advertisements and erroneously remembering others, advertising executives said a 30-second Super Bowl buy is worth the investment, a cost that exceeds $5 million between media, talent and associated production costs.

Both Sweeney and Deacon Webster, co-founder and chief creative officer of Walrus, a New York-based advertising and media agency, said there’s no better investment in the advertising world like the Super Bowl. This year saw 60 commercial spots from 54 advertisers, according to iSpot.TV.

“You don’t get to roll the dice in any other programming where literally the whole nation could be talking about it,” Sweeney said.

And while ads are designed to sell products and online spots might get more bang for your buck these days, Webster said, having a commercial run in America’s premier sporting event also serves as a sign of intent and status for the brands that pony up the cash to run them.

“That’s ultimately how people look at ads,” he said. “They’re judging you on whether or not they think your product is going to be successful.”

“What bigger event to sort of say, ‘I’m legit,’ than the Super Bowl,” he said.