A Potential Weakness in Bernie Sanders’ Coalition? The Politically Disengaged

Sanders, who launched his campaign on Monday, is the top choice for likely Democratic primary voters who aren't "at all interested" in politics or public affairs. (Sean Rayford/Getty Images)
By Eli Yokley

Sen. Bernie Sanders launched his second campaign for the Democratic nomination for president Tuesday as the front-runner in the current field of candidates.

And according to Morning Consult polling, the Vermont independent scores better with Democratic voters who shy away from politics and public affairs than any current or potential 2020 aspirant. 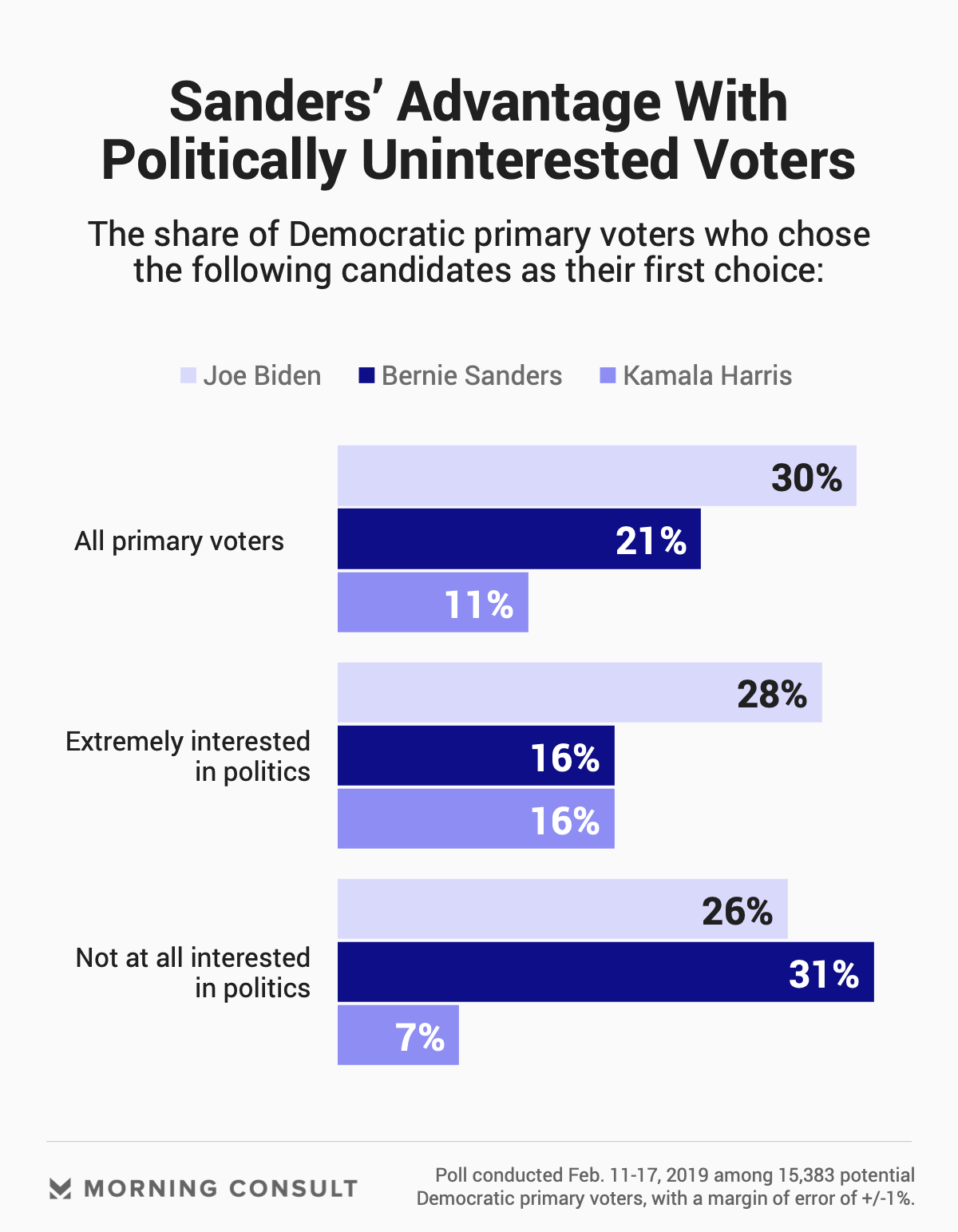 Among Democratic primary voters who said they are “not at all interested” in politics or public affairs, 31 percent said Sanders was their first choice for president – more than any of the other 18 names surveyed. The poll of more than 15,383 Democratic primary voters was conducted Feb. 11-17, before Sanders entered the race, and has a margin of error of 1 percentage point.

Sanders’ lead among those voters could give him a decisive edge in the primary if a potentially untapped base of voters show up to the polls. But it could also serve as a warning sign for comparatively soft support, as uninterested voters tend to be less likely to vote.

“If Sanders doesn’t mobilize his supporters to vote, then their support doesn’t really matter in the discussion about winning the Democratic nomination. You don’t get bonus points for attracting non-voters. Primaries are generally decided by the most interested and engaged people,” Nathan Gonzales, a nonpartisan elections analyst who runs Inside Elections, said in an email. ”But, with President Trump in office, the stakes are high for Democrats and the nominating process could attract more interest, including more casual voters.”

Kyle Kondik, managing editor of Sabato’s Crystal Ball at the University of Virginia Center for Politics, said Sanders may be benefiting from high awareness among the public after mounting a more competitive-than-expected challenge to Hillary Clinton for the party’s nomination in 2016.

Sanders’ insurgent campaign attacked Clinton from the left, pushing for a single-payer health care system that has been embraced by some prominent Democrats and 2020 contenders. His success in shifting the debate leftward was highlighted Tuesday by Republicans: A spokeswoman for Trump’s re-election campaign said in a statement that Sanders “already won the debate in the Democrat primary.”

The self-described democratic socialist enters the 2020 contest with almost universal name ID among registered Democrats, and they like what they know about him. Three in four Democratic primary voters expressed a favorable view of him, putting him on nearly equal footing with former Vice President Joe Biden, who would enter the race as the front-runner if he jumps in.

While Sanders was most likely to garner support from the voters least interested in politics, things were more competitive at the other end of the spectrum. Biden was the first choice for 28 percent of “extremely interested” Democrats, the largest share in the survey, and Sen. Kamala Harris of California, with 16 percent, tied Sanders among that voting bloc.

Among candidates who have announced, Sanders is atop the field, with 21 percent of Democratic primary voters calling him their first choice, placing him 9 points below Biden and 10 points above Harris, who has held third place among the  primary electorate since announcing her campaign last month.

Sanders, a 77-year-old who represented Vermont in the House for 16 years before being elected to the Senate in 2006, has consistently been ranked as America’s most popular senator among his own voters, with 64 percent of Vermonters approving of him, according to the latest Morning Consult Senator Approval Rankings. Among Democrats in Vermont, 92 percent approve Sanders – tying him with Montana Sen. Jon Tester as the most popular senator with the Democratic base at home.

Related: Amy Klobuchar Is Popular With the Voters Who Know Her