Green New Deal Proponents Not Uniformly Behind a Broadened Platform

Quarter of Republican voters said they back the Green New Deal

Nearly half of the voting public supports the Green New Deal, but over a third of the platorm’s backers think it should focus on addressing climate change rather than integrate a host of additional policies, according to a new Morning Consult/Politico poll.

In the Feb. 15-19 survey conducted among 1,914 registered voters, 48 percent said they support the Green New Deal resolution introduced in Congress. Twenty-eight percent said they oppose the measure, and almost a quarter of voters (24 percent) said they were unsure or had no opinion. The poll’s margin of error is 2 percentage points. 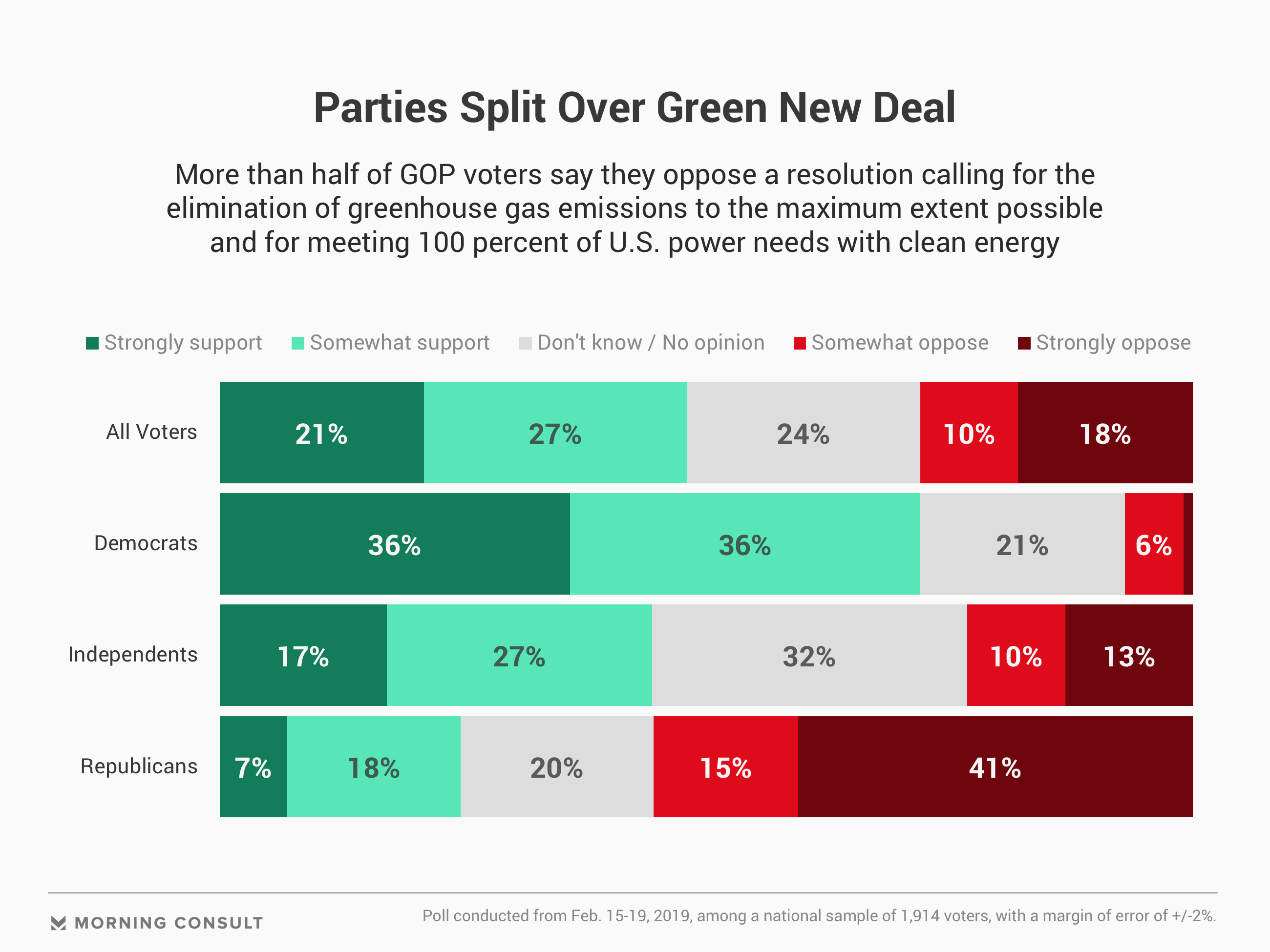 Rep. Alexandria Ocasio-Cortez (D-N.Y.) and Sen. Edward Markey (D-Mass.) introduced identical resolutions in their respective chambers on Feb. 7.The non-binding bills, which Senate Majority Leader Mitch McConnell (R-Ky.) has said he intends to bring to a floor vote, describe both energy and labor policies under an economic mobilization that Green New Deal advocates have put forward.

But while 28 percent of voters said the Green New Deal should incorporate environmental justice, social and economic policy issues into its platform, 32 percent said it should focus specifically on addressing climate change. When asked which of those two options most closely adhered to their view, 40 percent said they were unsure.

However, almost one in two voters overall (49 percent) said they support the inclusion of workers’ rights and union job creation in the Green New Deal, compared with 28 percent of voters who oppose it and 24 percent who are unsure or without an opinion.

Conservatives have called the Green New Deal a “pipedream” and “socialist Christmas list,” while many of the current top contenders for the 2020 Democratic nomination have voiced support for the idea of a Green New Deal and are co-sponsoring the resolution in the Senate. They survey found most Republicans (56 percent) opposed the resolution, compared with 72 percent of Democratic voters who backed it.

Republicans also registered less concern about the effect of climate change on the U.S. environment than the 88 percent of Democrats who were concerned.