Half of the Country Thinks Oscars Are Irrelevant

Most say Hollywood is out of touch with the public 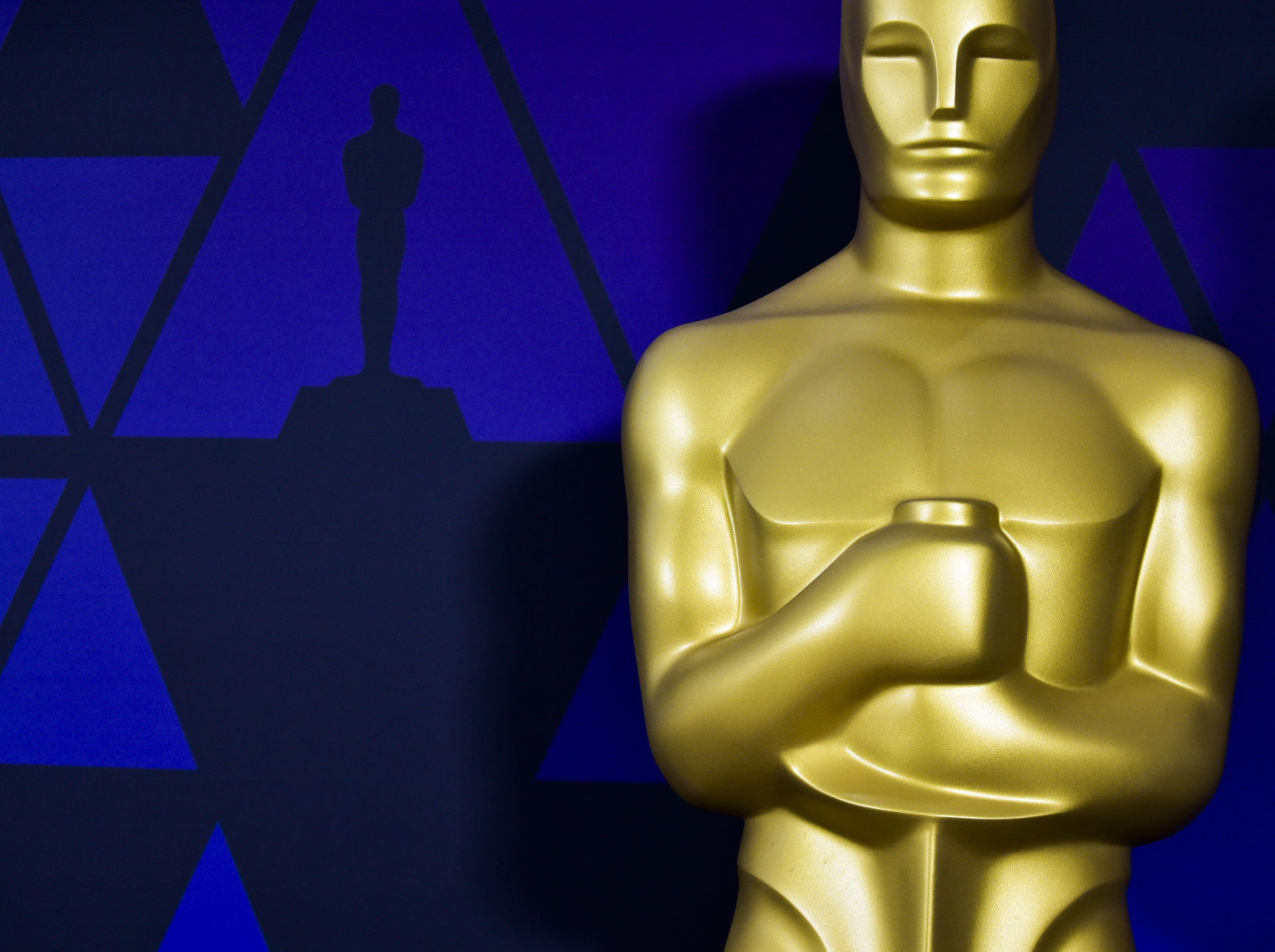 In terms of relevance, the Oscars rank near the bottom of major U.S. broadcast events. (Rodin Eckenroth/Getty Images)
By Joanna Piacenza

The Academy of Motion Picture Arts and Sciences and ABC might be happy with a rise in Oscar viewership this year after the record-low ratings of last year, but they shouldn’t be complacent: A new Morning Consult poll shows that half of the country doesn’t think the Academy Awards are relevant and most think Hollywood figures and the organization behind the Oscars are out of touch with the public. 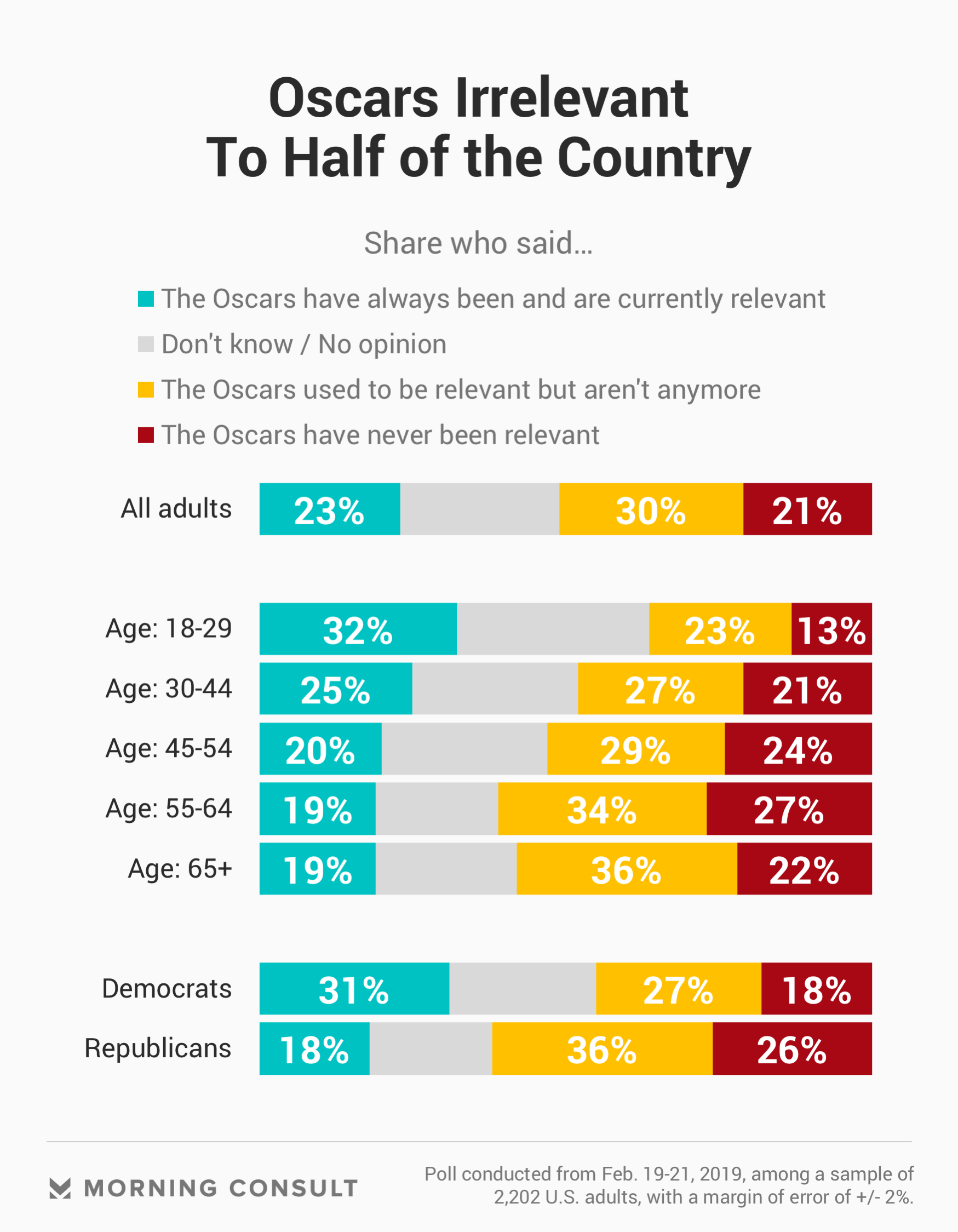 Fifty-one percent of U.S. adults said the Oscars either used to be relevant but no longer is (30 percent) or was never relevant (21 percent).

But Paul Dergarabedian, a senior media analyst for Comscore, said the Oscars’ importance still resonates throughout the entertainment industry and, by proxy, for the public.

Studios respond to nominated and winning films by flexing their marketing muscle, thus catching the eyes and wallets of more consumers. Indeed, 2018 Best Picture nominees “The Shape of Water,” “Lady Bird” and “Three Billboards Outside Ebbing, Missouri” saw ticket sales increase by 100 percent or more on the day nominees were announced, according to Fandango Inc.

“Whether they seem relevant or not to the average moviegoer, they are relevant to the movies because pragmatically speaking, you get another bite of the apple,” he said of Oscars nominations. Recognition from the Academy breathes new life into films that have been in theaters for months or are largely unheard of, he said. 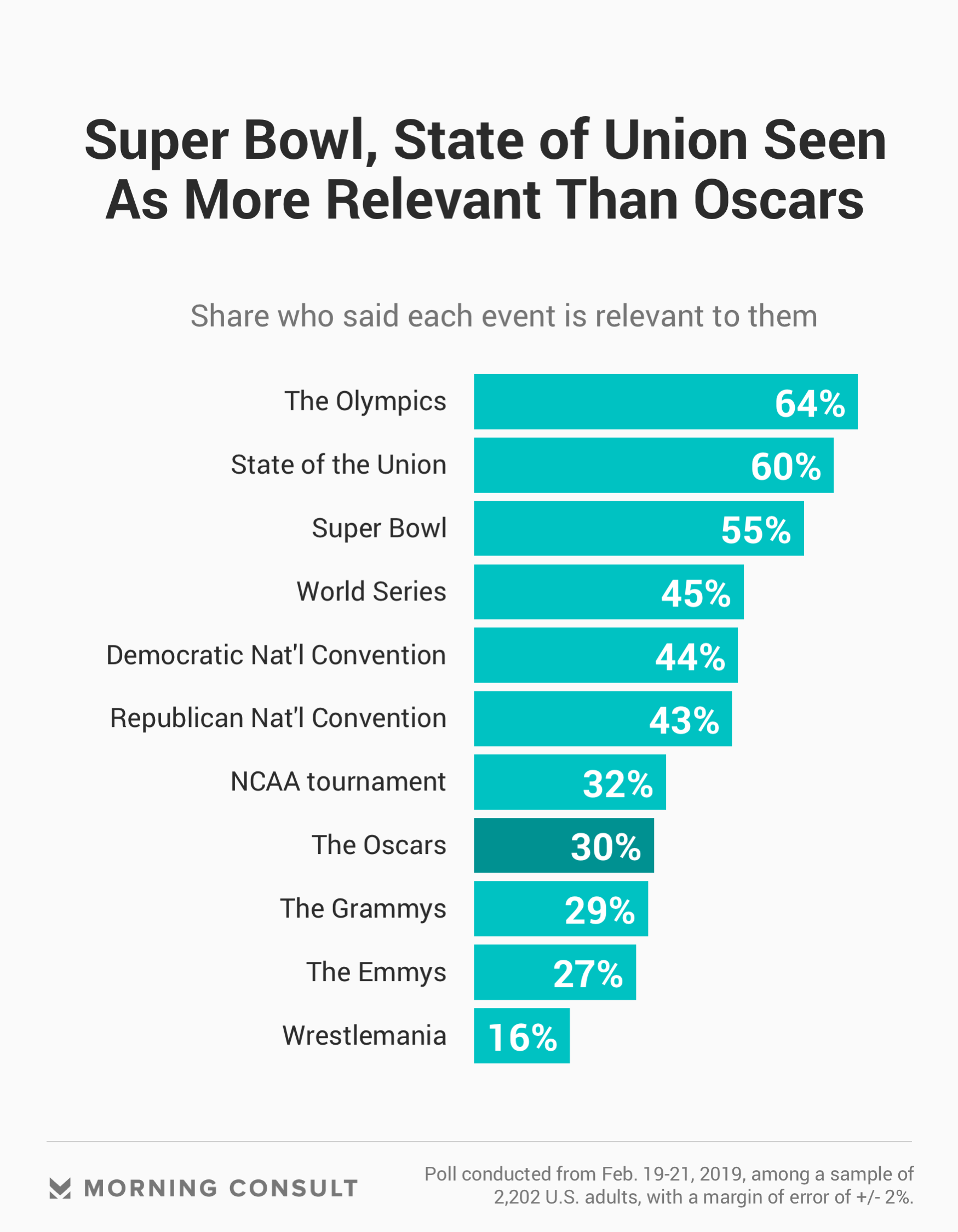 “Relevant” here could mean many things to respondents as it pertains to the Oscars: whether they care about it, or if it impacts their choice to see a film and their views of Hollywood figures; whether they choose to watch the ceremony, or if they think the Oscars are in touch with the fabric of society.

Even if the lion’s share of the public doesn’t perceive the Oscars as relevant, he said, they’re responding to studios’ belief that they are.

Dergarabedian also separated perceptions of the Oscars into two categories: nominations, which deal with the big screen, versus the actual telecast, which deals with the small.

Indeed, the public put the Oscars’ relevancy quite low compared to other broadcasted events. Respondents were far more likely to ascribe importance to quintessentially American events that evoked patriotism or the spirit of competition, such as the Olympics, the State of the Union or the Super Bowl.

The Oscars’ decision to go without a host after comedian Kevin Hart withdrew might have been have a step in the right direction in terms of its popularity, Dergarabedian said, adding that industry insiders he’s spoken with saw the hostless event as a win.

The public did, too: Oscar viewership grew 11 percent compared to last year, Nielsen data shows, jumping from 26.6 million viewers in 2018 to 29.6 million during this year’s telecast. 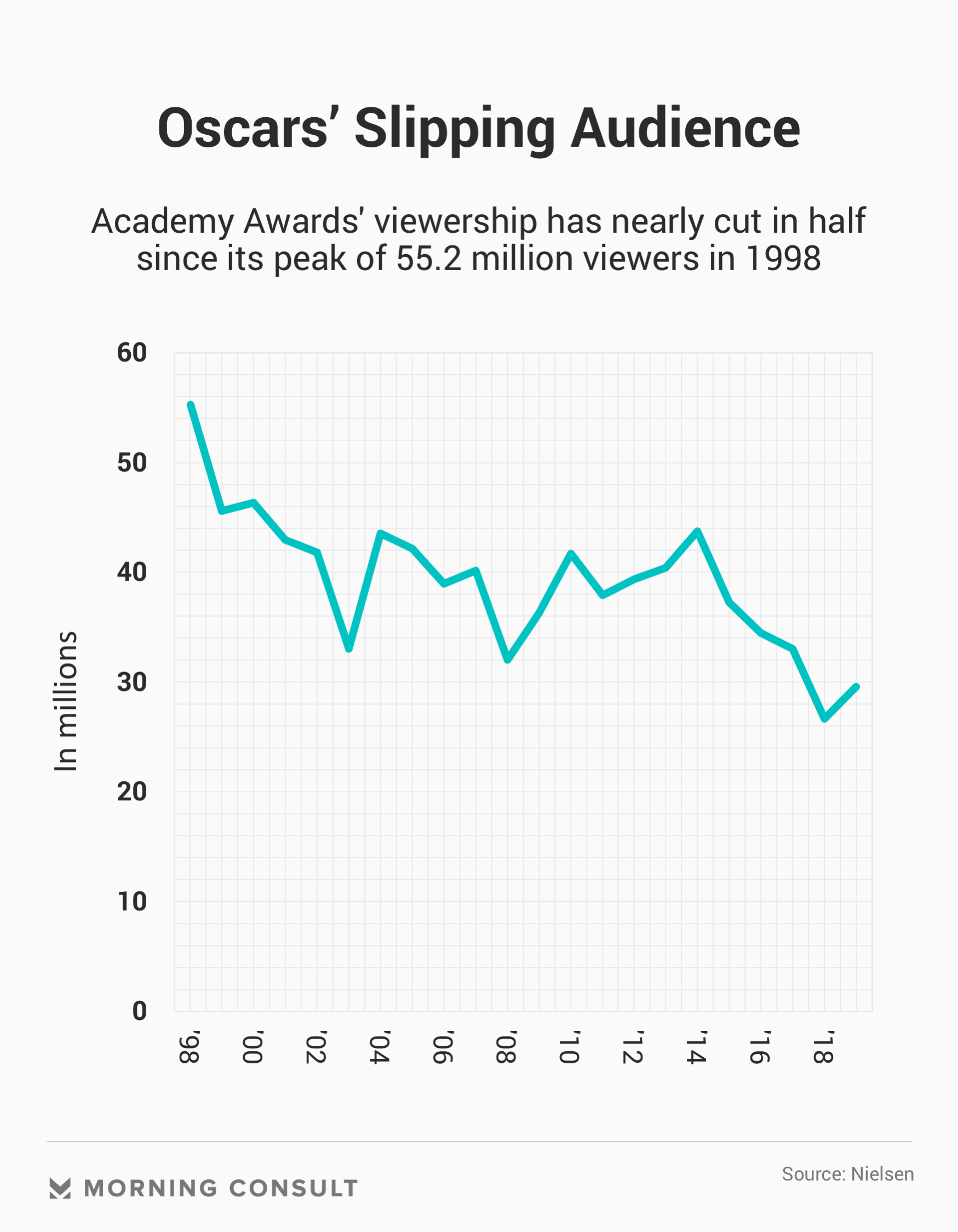 But Hollywood still has a perception problem: Many people see it as out of touch with the rest of the country — a theme dominating media reports of the show. And notably, some of the strongest disagreement occurs along party lines.

Politics and other cultural issues have defined much of the media’s Oscars coverage over the past few years, and this year’s ceremony was no different. Best Adapted Screenplay Oscar winner Spike Lee called for voter mobilization ahead of the 2020 election in a politically tinged acceptance speech.

And although Lee never mentioned President Donald Trump by name, the president took the call to vote as a personal affront, calling Lee’s words a “racist hit on your President” in a tweet on Monday. 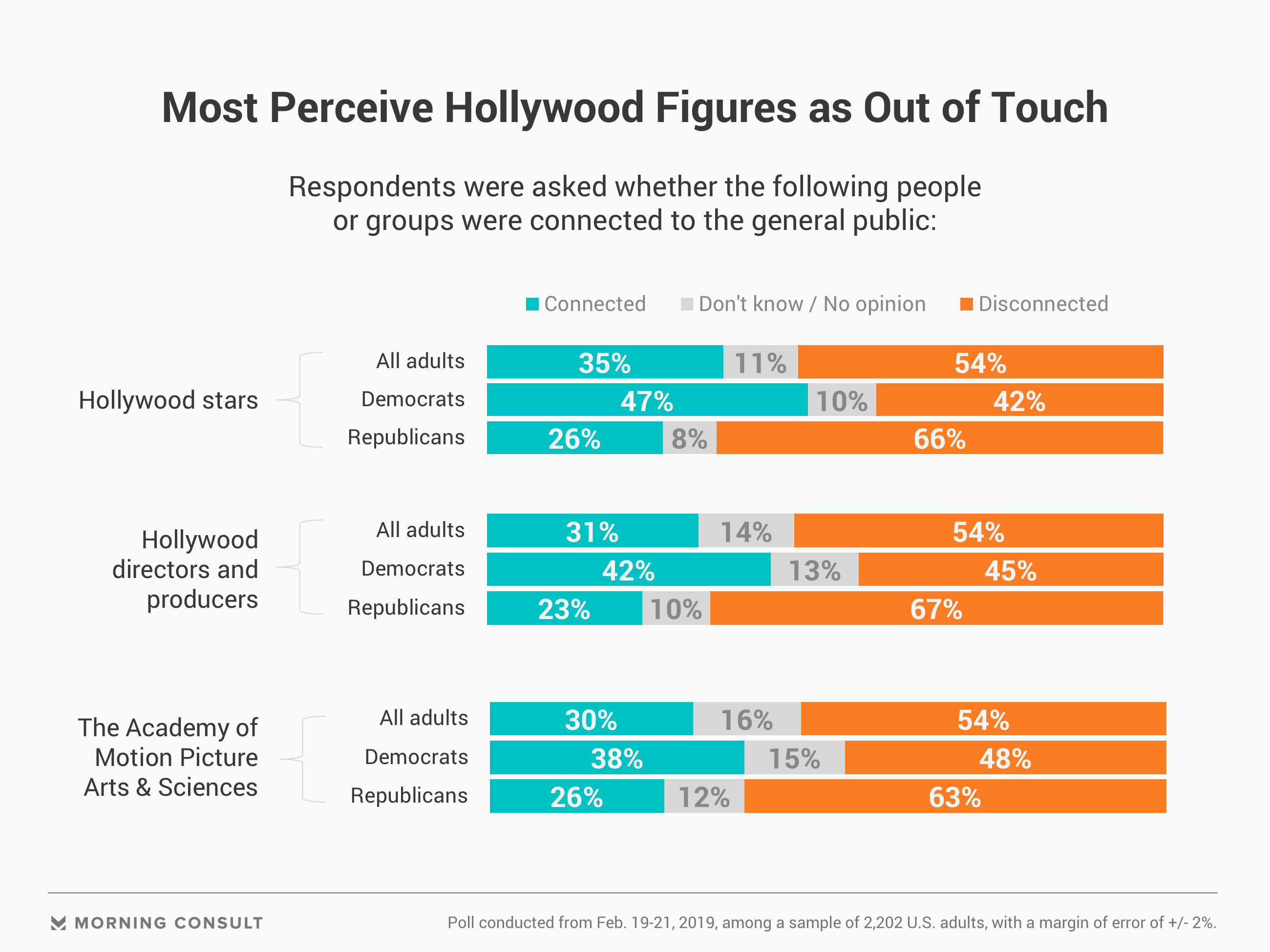 The survey’s findings suggest a link between views on the Oscars’ relevance and harmony with the views espoused on stage: Democrats were more likely than Republicans to say the Academy Awards are very or somewhat relevant (40 percent vs. 24 percent).