‘Medicare for All’ Loses Upper Hand Over ‘Single-Payer’

Majority of voters back national health plan under either name, but disparity in support between two labels shrinks

PJ Espinal, left, and Ronne Denbo joined other protesters on July 24, 2017, in Fort Lauderdale, Fla., to demand affordable health care for all. (Photo by Joe Raedle/Getty Images)
By Yusra Murad

As all eyes in the health sector turn to “Medicare for all” following House Democrats’ introduction of the Medicare for All Act of 2019, new Morning Consult data finds the messaging advantage “Medicare for all” once carried has largely dissipated: Voters now respond equally favorably to a health care system in which all Americans have insurance through the government whether it is called “Medicare for all” or “single-payer.”

“Medicare for all” and “single-payer” have long been treated as synonyms by Republicans and Democrats alike, and both represent potential pathways to universal coverage. But there are differences between the two: Single-payer is a sweeping term for a system in which the costs of essential care for all residents are covered by one public system, while a “Medicare for all” program could be single-payer but does not necessarily have to be.

Given the popularity of the federal program for seniors, “Medicare for all” has historically played well as a soundbite. In a November 2018 messaging test, 58 percent of voters backed “Medicare for all,” 9 percentage points higher than the 49 percent share that supported “single payer.”

Related: Voter Support for ‘Medicare for All’ Tumbles in New Year

But in a survey conducted March 1-3 among 1,993 registered voters, 53 percent of voters support “Medicare for all” compared to 51 percent who support “single-payer.” Given the survey’s margin of error of 2 percentage points, the two are essentially tied.

In November, a “Medicare for all” health system garnered net support of 30 points (calculated by subtracting the share of opponents from the share of supporters) — dwarfing net support for “single-payer” by 17 points. Both systems had identical definitions in questions asked to respondents. 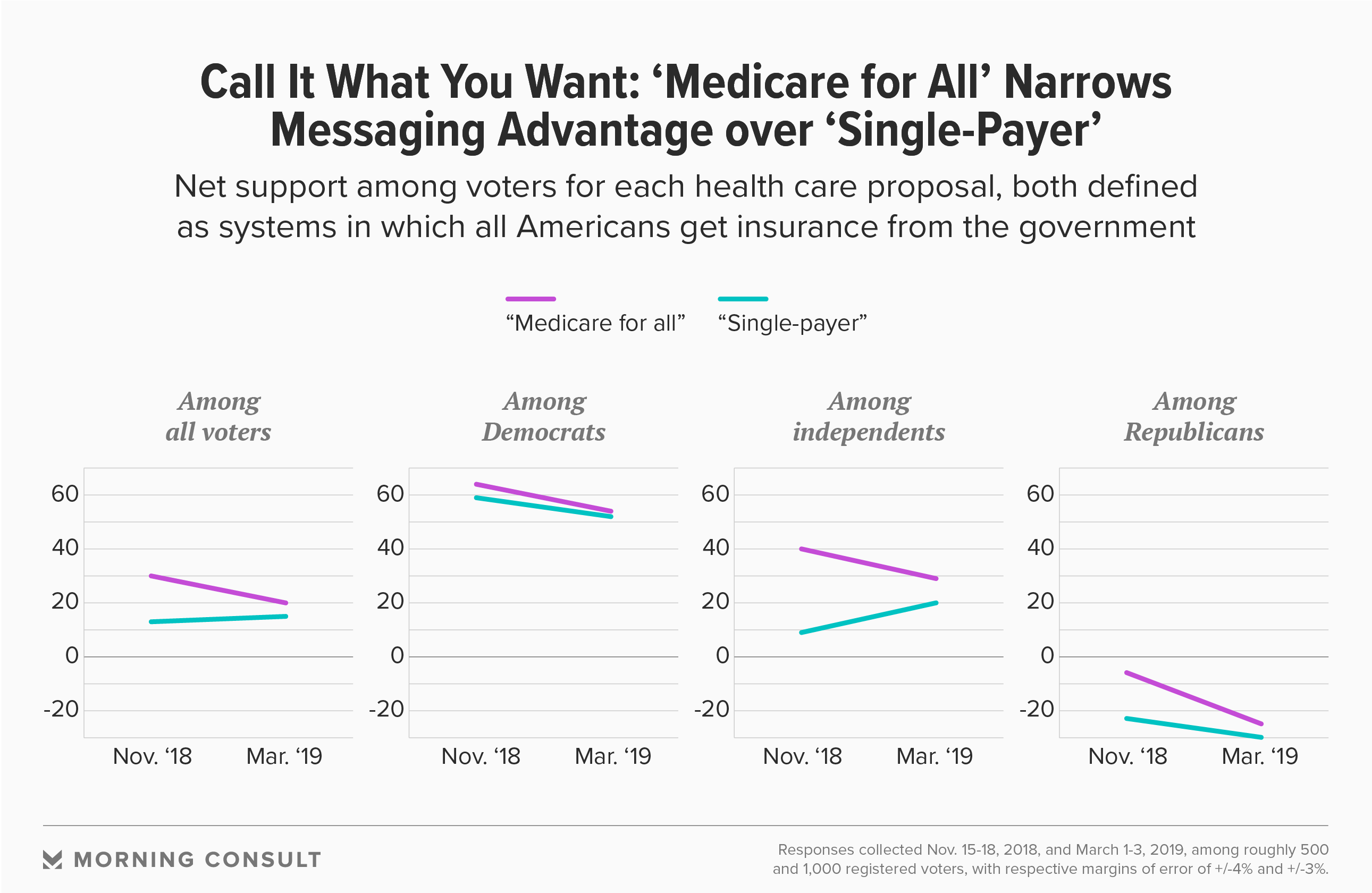 The historic preference for “Medicare for all” language, popularized by Sen. Bernie Sanders (I-Vt.) during his 2016 bid for president, persisted across all types of voters in November — especially for independents, whose net support for a federally run health system more than quadrupled when it was labeled “Medicare for all” rather than single-payer.

But the most recent poll, conducted after the introduction of Rep. Pramila Jayapal’s (D-Wash.) first legislative plan for “Medicare for all” in this Congress, the disparity shrank to near-close.

In addition, after taking a fall from January to February, net support among all voters for “Medicare for all” recovered some lost gains, jumping from 12 points in February to 20 in March. The 67 percent growth was fueled mostly by independents, whose net support more than doubled, from 14 to 29 points, and Republicans, whose net support — though still deep underwater — rose 9 points to minus 25. 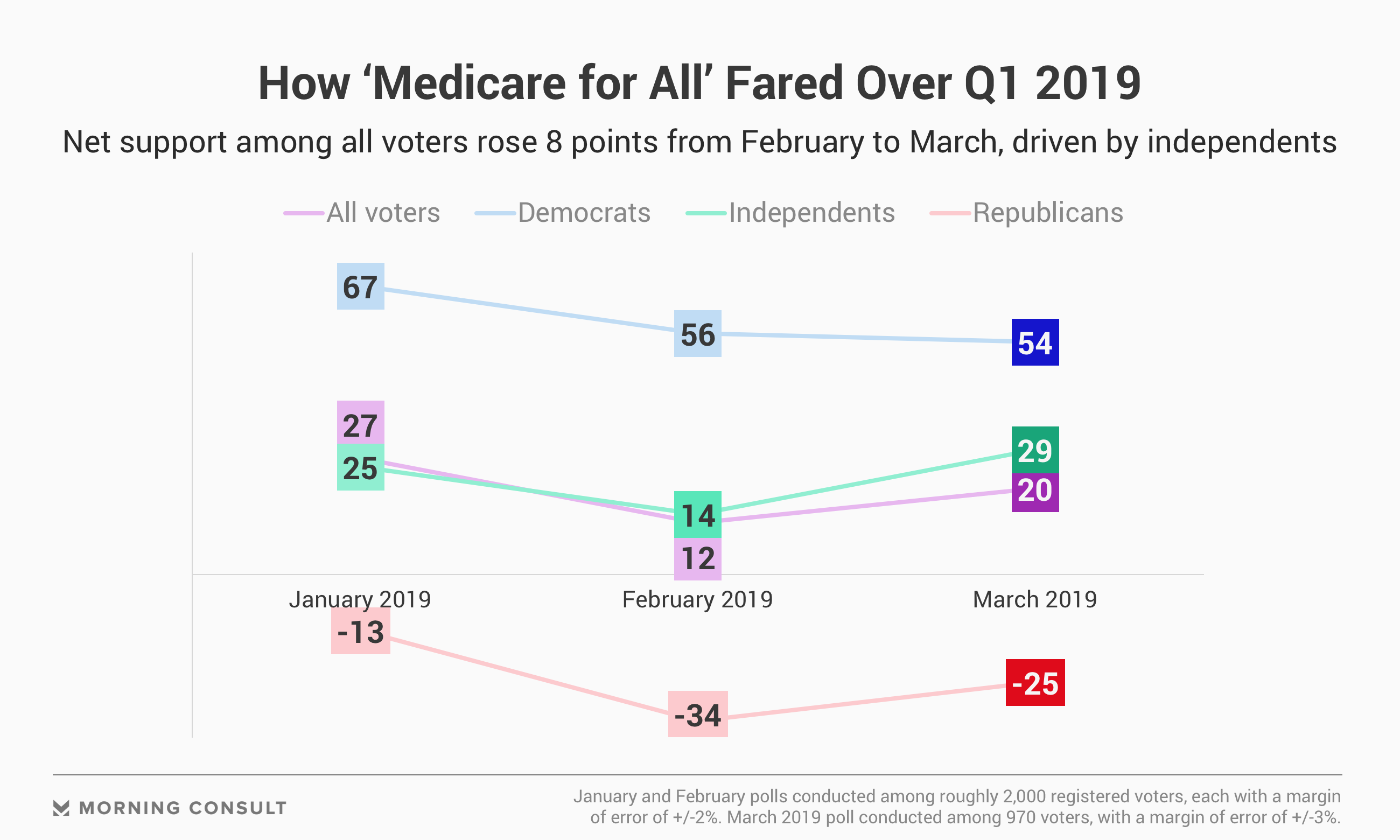