Majority of GOP voters back creation of group to tackle competition in the U.S. tech markets

Facebook co-founder, Chairman and Chief Executive Mark Zuckerberg testifies before the House Energy and Commerce Committee in the Rayburn House Office Building on Capitol Hill April 11, 2018, in Washington, D.C. A plurality of voters in a recent poll agree that tech companies have too much power and should be regulated more. (Photo by Chip Somodevilla/Getty Images)
By Sam Sabin

As the Federal Trade Commission prepares to dedicate more resources to assess competition in the technology industry, experts are wary of throwing full support behind the move until it’s clear what exactly the agency’s task force will look like.

But there’s bipartisan consensus among nearly half of registered voters in a new Morning Consult/Politico poll for supporting the agency’s effort to regulate an industry that a plurality of respondents say currently has too much power.

In a survey conducted March 1-3 among 1,993 registered voters, 47 percent said they support the establishment of an FTC task force to examine future and past mergers and acquisitions in the tech industry. Last week, the agency, which regulates for anti-competitive, deceptive and unfair business practices, announced it would create the Technology Task Force, a group made up of existing staff in the FTC’s Bureau of Competition, to monitor competition in U.S. technology markets. 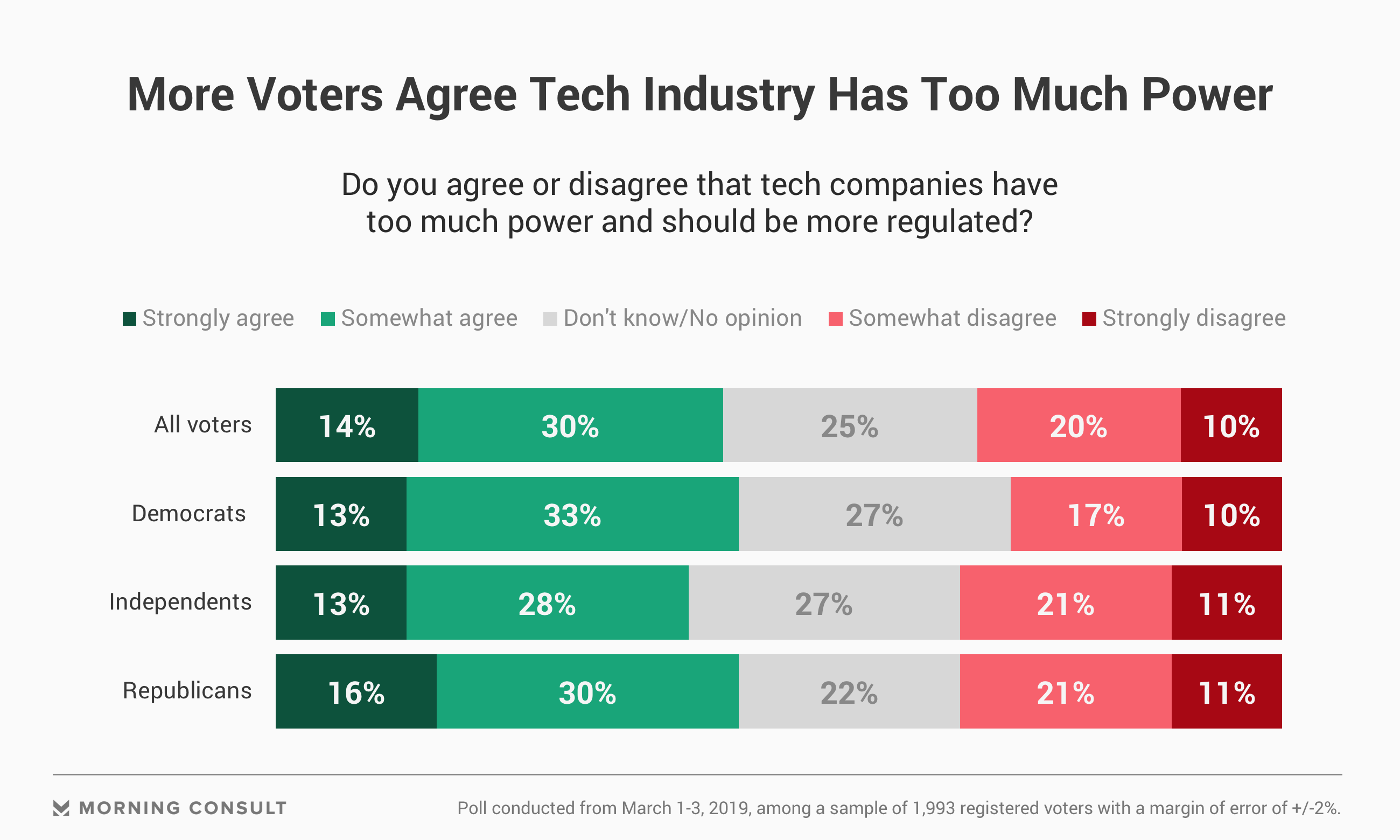 The move is seen as a reaction to public pressure to regulate the industry following privacy violation and data mining scandals at major tech companies, said Sarah Miller, deputy director at Open Markets Institute, an anti-monopoly think tank in Washington.

“From an everyday perspective, I think people have started to see and notice a lot of the crazy ways that these companies operate through targeted advertising,” she said. “As these companies really try to entrench themselves in our lives, it’s become more obvious.”

Voters from all parties are more likely to agree that tech companies have too much power and that the federal government should step in to regulate more, with a plurality (44 percent) of all voters agreeing with the statement, including 46 percent of Republicans and Democrats. A quarter of voters overall said that tech companies’ growth has been hindered because the federal government regulates them too much, and 33 percent said tech is regulated the right amount. 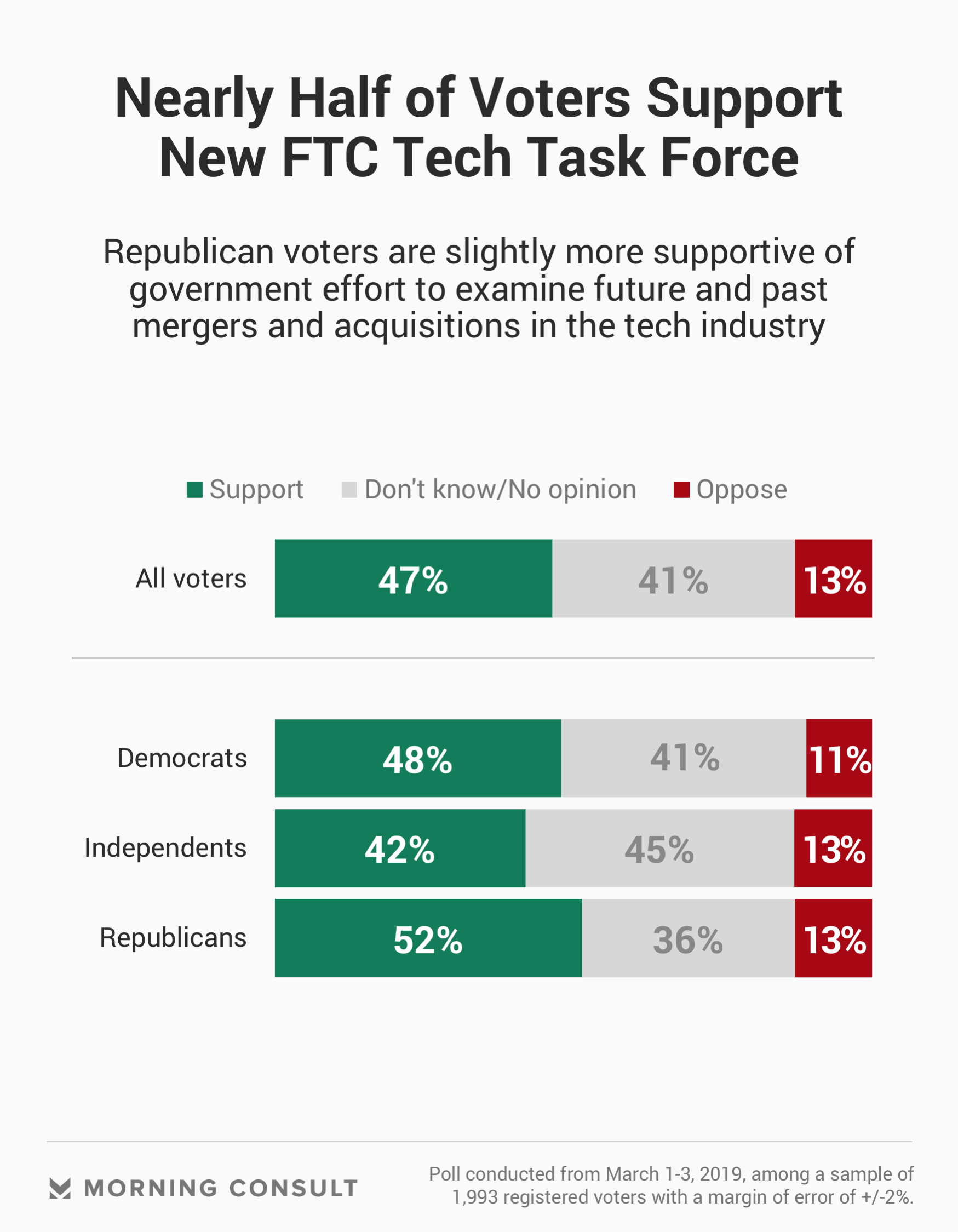 “We’ve seen a lot of attention paid on Fox News, and Tucker Carlson has done a lot of monologues on bias against conservatives, so in some ways it’s not surprising,” Watney said.

Watney said he expects the task force to first review previous merger cases — such as Facebook Inc.’s 2012 acquisition of Instagram and its 2014 deal with WhatsApp — and see what can be learned from them. But Watney, who generally supports moves to foster competition that don’t rely on antitrust measures, also said he hopes the new FTC group takes an “interdisciplinary approach” and includes a mix of technologists and economists in its decision-making.

Miller said the creation of a task force at the FTC is roughly the equivalent of the Food and Drug Administration announcing a new commission to regulate food safety because regulating competition in the tech industry already falls under the agency’s purview. But she is also looking to see what the group takes on.

“It does show that they’re feeling the need to respond somehow to the public pressure that’s mounting on them to act,” she said. “But at this point, this is more of a PR move than a serious step in the right direction, and hopefully we see some changes down the line.”

The tech industry is “at the end of what has been a real kind of honeymoon period in the press and in the public ecosystem,” Miller noted, adding that “folks are really now learning how they make money and how they operate.”