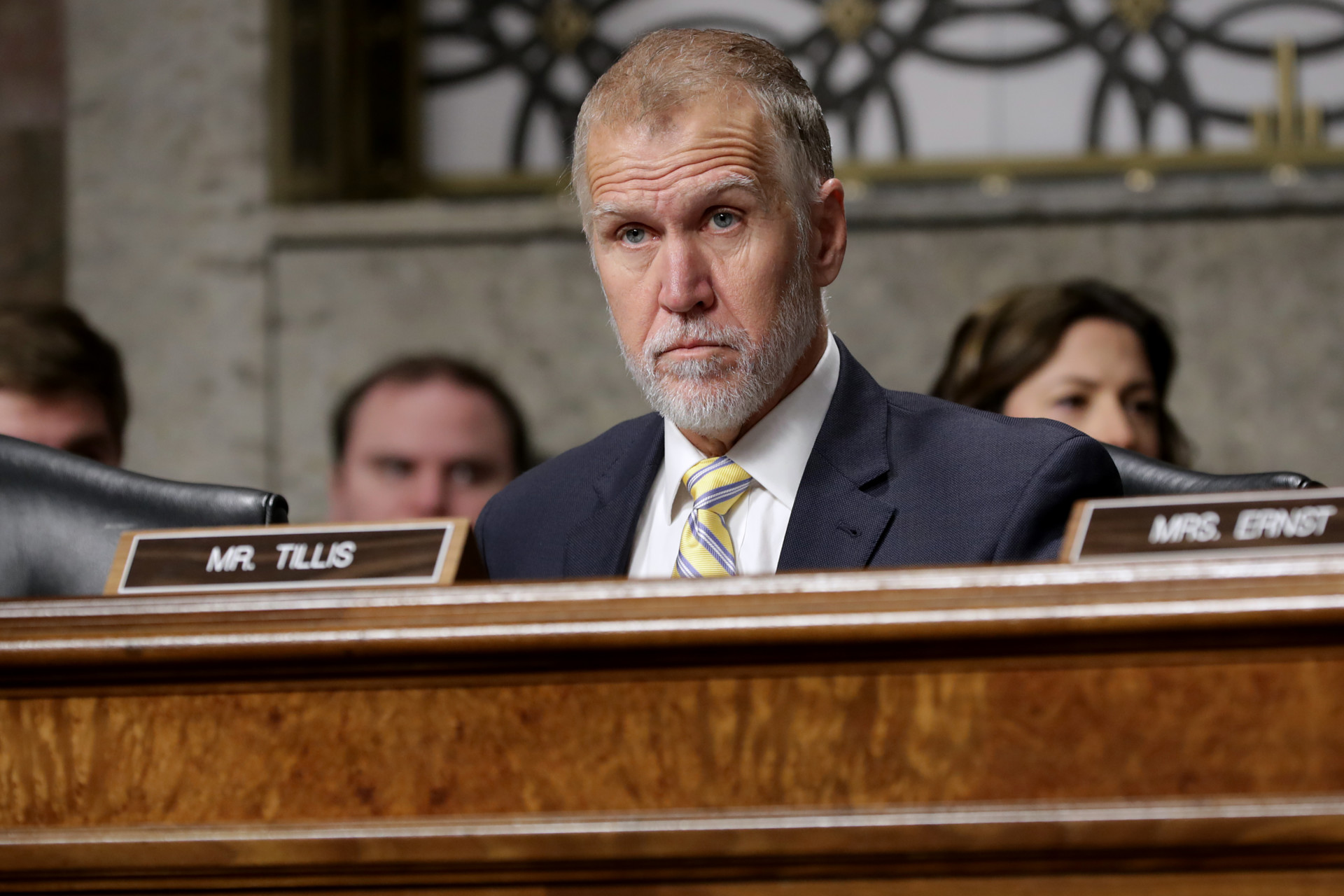 Sen. Thom Tillis (R-N.C.) is among the Republicans planning to vote against the president's emergency declaration at the border. (Chip Somodevilla/Getty Images)
By Eli Yokley

President Donald Trump’s decision to invoke emergency powers in a bid to divert resources to the country’s southern border has put Senate Republicans in a bind as they consider whether to back his unilateral action on the Senate floor Thursday.

The latest Morning Consult/Politico poll underscores the political difficulty of the situation: Either break with Trump and suffer the wrath of the GOP base, or support the president and alienate the broader electorate. 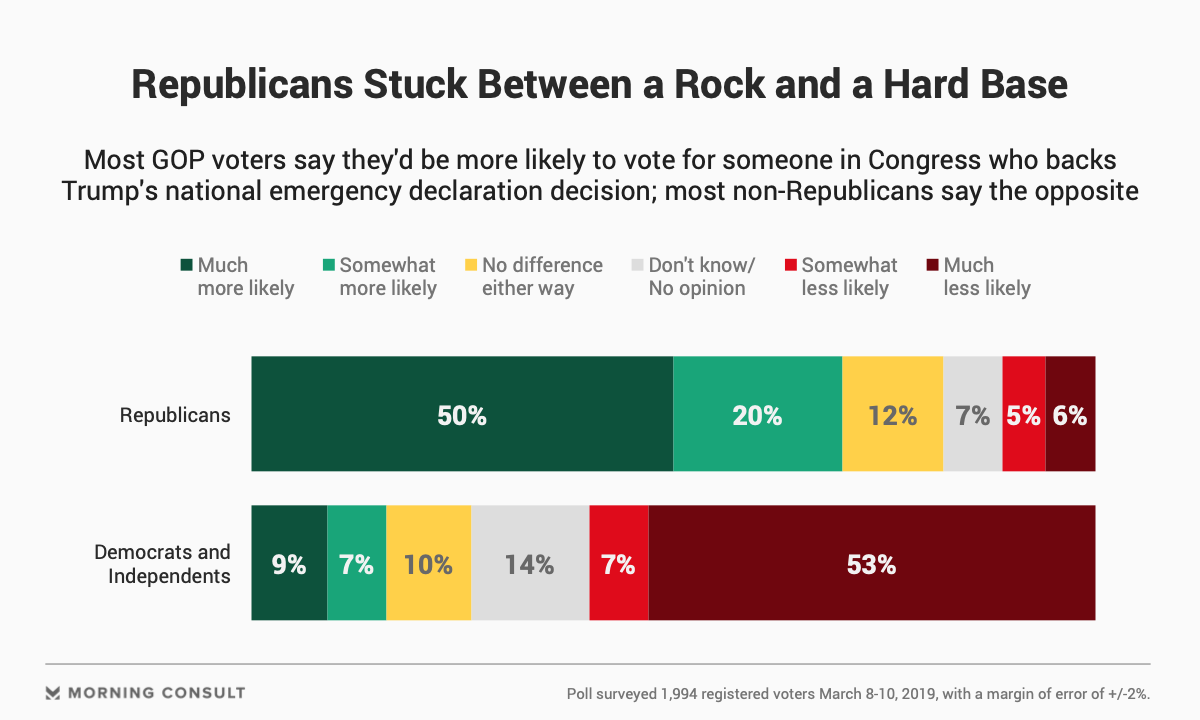 Seven in 10 Republican voters said they would be more likely to vote for senators or representatives who support Trump’s decision, according to the March 8-10 survey, while 3 in 5 non-Republicans – self-identified Democrats and independents – said they would be less likely to back the lawmaker in 2020.

The issue of Trump’s emergency declaration has become a de facto debate over Trump’s chief campaign promise of a U.S.-Mexico border wall, and has divided the Republican Party on Capitol Hill despite its popularity among Republican voters.

According to Politico, roughly a dozen other Republican senators are considering voting with their four colleagues, though neither chamber is expected to have enough votes to override a threatened presidential veto of the disapproval resolution. 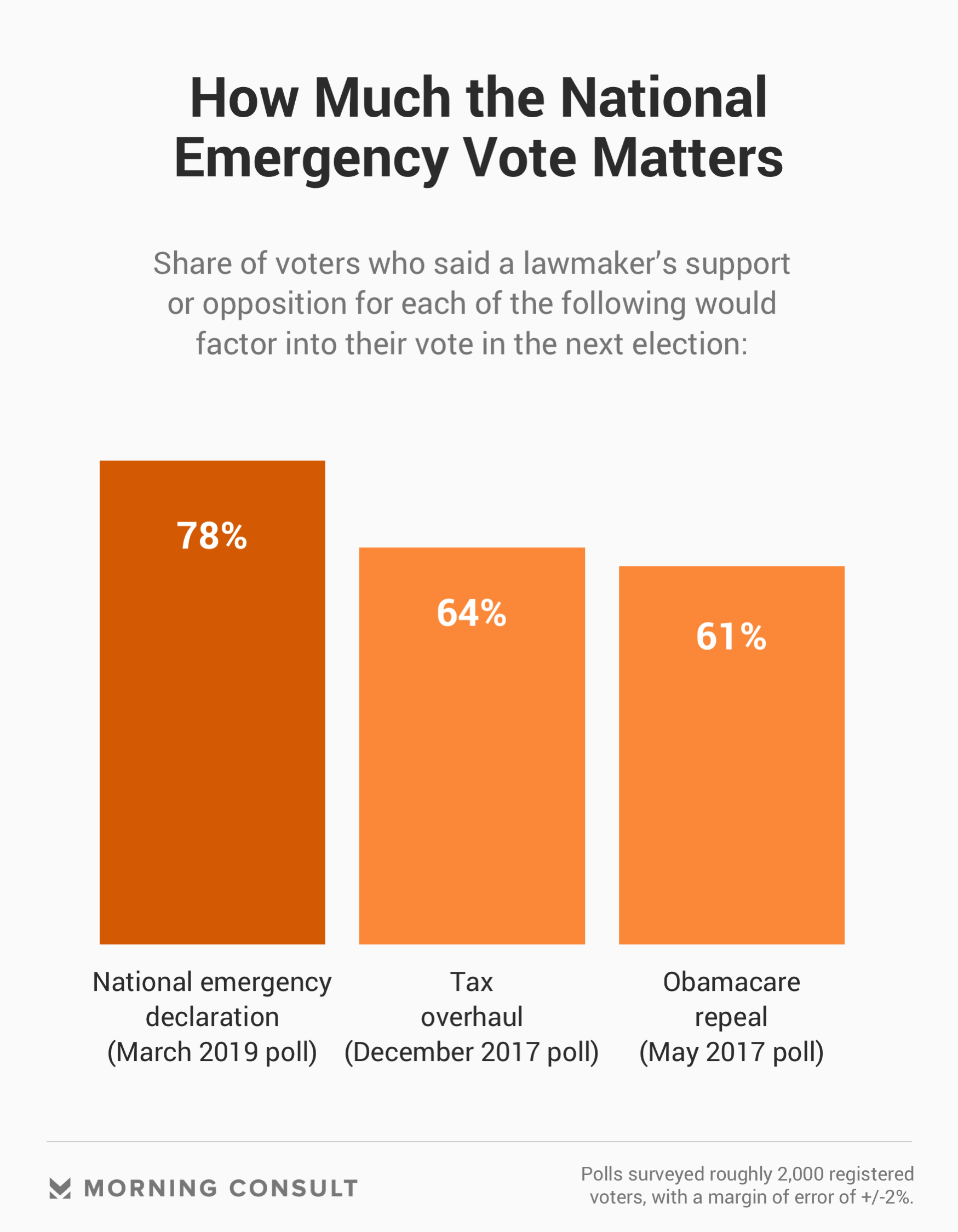 Morning Consult data shows the vote could be a big one for the legislators on the ballot next year. Seventy-eight percent of the electorate said support or opposition for Trump’s national emergency declaration would sway their vote one way or another, higher than the 61 percent who said the same for the GOP’s plan to repeal and replace the Affordable Care Act in May 2017 and the 64 percent who said the same of the Republican tax bill in December 2017.

Trump’s tack of speaking almost exclusively to his own base caught up with congressional Republicans in 2018, as they shed 40 House seats and underperformed early forecasts for Senate gains despite picking up two seats.

Collins and Tillis are among the Senate Republicans expected to face tough re-election campaigns in 2020. In a Washington Post op-ed, Tillis cast his planned vote in favor of the resolution not as a vote against Trump’s border wall, but as a defense against executive overreach, particularly against a liberal Democratic president.

The careful explanation comes in the face of strong support from the Republican base for Trump’s tactics: Eighty percent of GOP voters in the recent poll support Trump’s declaration of a national emergency on the southern border, compared with 20 percent of non-Republicans. The rest of the electorate is similarly opposed to the president’s decision: Seven in 10 voters who identify as Democrats or independents said they were against Trump’s invocation of emergency powers.

The poll, which surveyed 1,994 registered voters, has a margin of error of 2 percentage points.

Related: Democratic Voters Would Rather Have a Leader Who Heals Than Fights
Congressional Politics Immigration