Tax Refunds Are a Political Wash for 2020

President Donald Trump holds up the first page of the tax reform legislation after signing it into law in the Oval Office on Dec. 22, 2017, in Washington, D.C. More than 60 percent of respondents in a recent survey said the size of their tax refund won't impact their 2020 vote. (Photo by Chip Somodevilla/Getty Images)
By Claire Williams

Americans might be getting lower tax refunds this year, but it probably won’t affect how they vote in the 2020 presidential race, according to a new Morning Consult/Politico poll.

Some people have taken to social media, using the hashtag #GOPTaxScam, after early Internal Revenue Service data suggested that the average tax refund in the first full tax season since the 2017 Republican-led tax overhaul would be lower compared to last year. Republicans and the Treasury Department, meanwhile, have sought to explain that the size of one’s tax refund doesn’t necessarily reflect an increase or decrease in the amount of taxes paid.

But despite the back-and-forth, 61 percent of voters said their tax refund wouldn’t sway their vote for or against President Donald Trump in 2020, according to the March 8-10 survey. 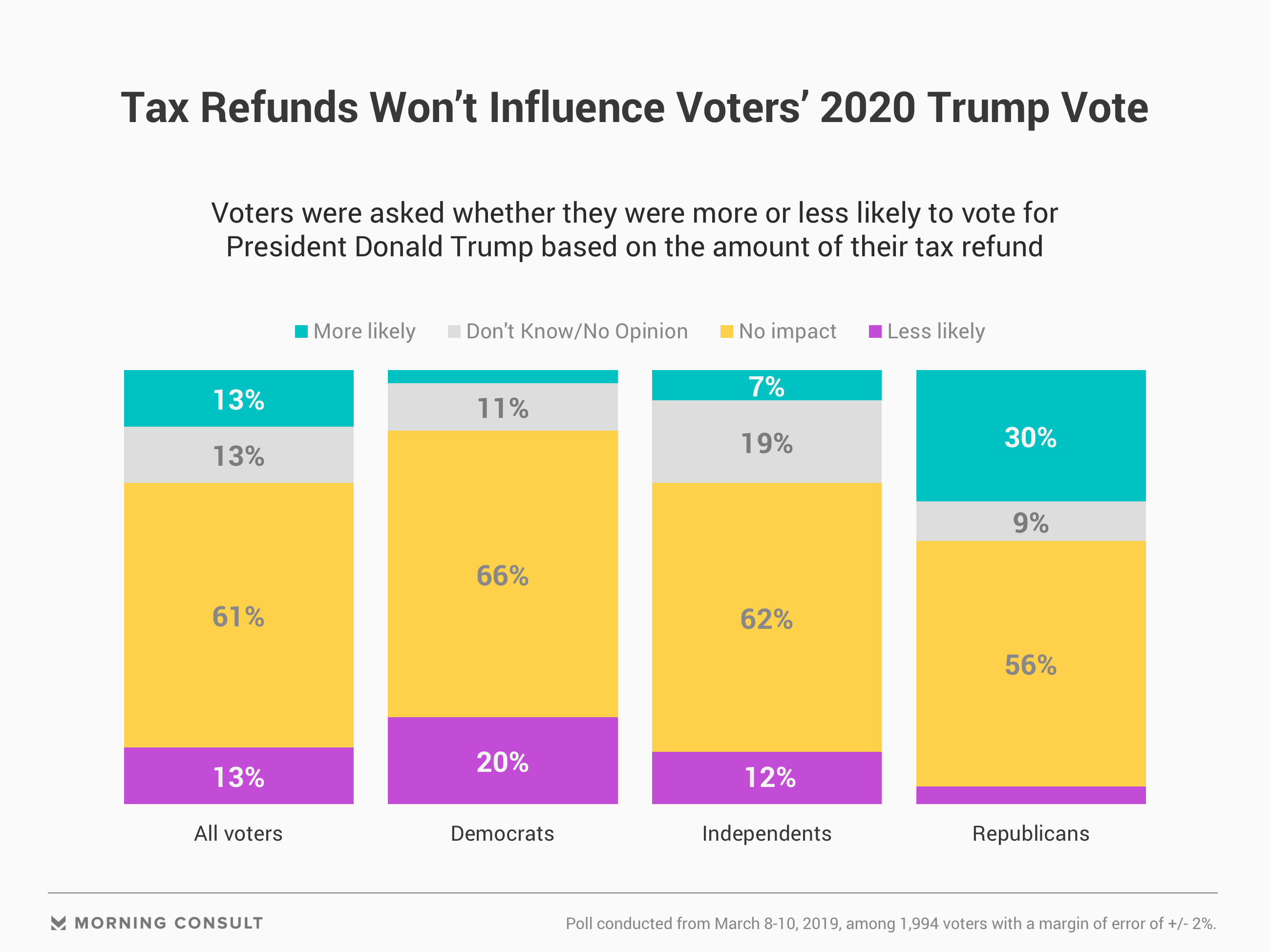 That view was largely supported across parties, including among 66 percent of Democrats, 62 percent of independents and 56 percent of Republicans. The poll surveyed 1,994 registered voters and has a margin of error of 2 percentage points.

Voters were split, 13 percent to 13 percent, on whether their refunds would make them more or less likely to vote for Trump in 2020.

It’s still too early to call for sure, but it’s likely that many Americans will see a lower tax refund this year. According to the most recent IRS data, for the week ending March 1, average tax refunds increased 0.7 percent from a similar period a year ago. In mid-February, however, average refunds were down as much as 16.7 percent. The Government Accountability Office last year warned that the number of Americans who would receive a refund would likely drop, while the number of Americans who owe money would increase.

Among voters, there’s a partisan divide in how people interpret their tax refunds. Eighteen percent of survey respondents said they received a larger tax refund this year compared to last, while 50 percent said they did not.

Tax refunds aren’t the only reason Democrats oppose the GOP-led tax overhaul. Democratic candidates have framed the law as helping the wealthiest Americans and corporations at the expense of middle-class and working voters. Previous Morning Consult/Politico polling showed that 78 percent of Democrats think upper-income people pay too little in taxes.

Related: Voters Say They Would Use Taxes on the Wealthy to Fix a Variety of Ills in the Nation
2020 Elections Tax Policy