No Bump for Beto: O’Rourke Sees Meager Polling Gain After His Campaign Begins 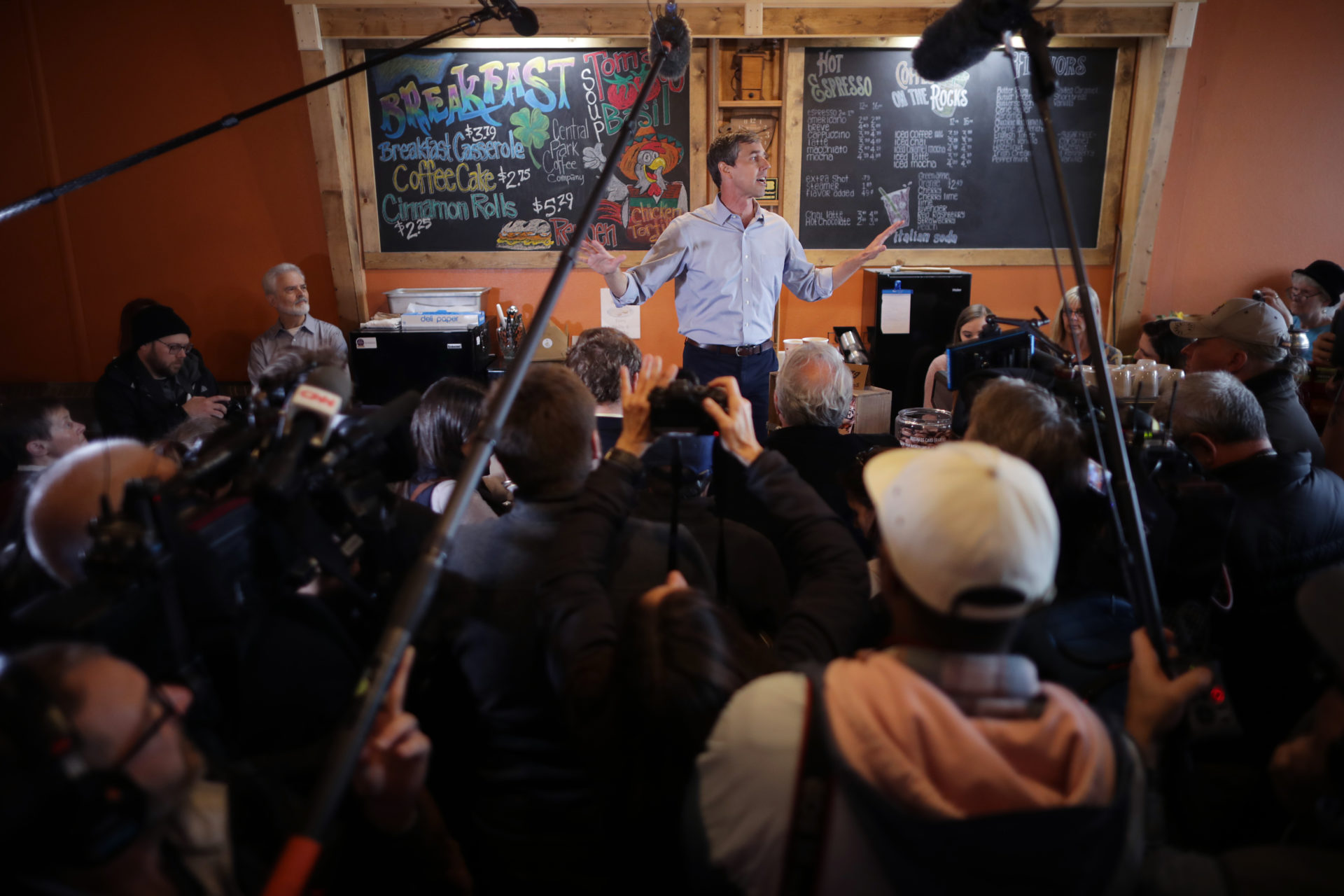 Beto O’Rourke, who launched his campaign for the Democratic nomination for president Thursday, is being hailed for his grassroots might after his campaign said it raised $6.1 million on his first day as a candidate, the biggest first-day haul of the current field.

But the immediate response from Democratic voters across the country paled in comparison with some of the party’s other high-profile contenders for the nomination, such as Sens. Bernie Sanders of Vermont and Kamala Harris of California.

According to Morning Consult’s latest Democratic primary tracking poll, 8 percent of Democratic primary voters said O’Rourke is their first choice for president, tying him with the Californian and putting him well behind the Vermont independent. O’Rourke’s figure is up 1 percentage point from the previous week.

O’Rourke’s share of support at this early stage in the race has hardly moved outside the margin of error of 1 percentage point since Morning Consult began tracking Democratic voters’ views in January. Eight percent of primary voters called him their first choice at the time and 9 percent called him their second choice, which is identical to the latest poll.

O’Rourke announced his candidacy midway through the March 11-17 poll of 13,551 Democratic primary voters, but 57 percent of the responses were collected on or after O’Rourke’s March 14 announcement. 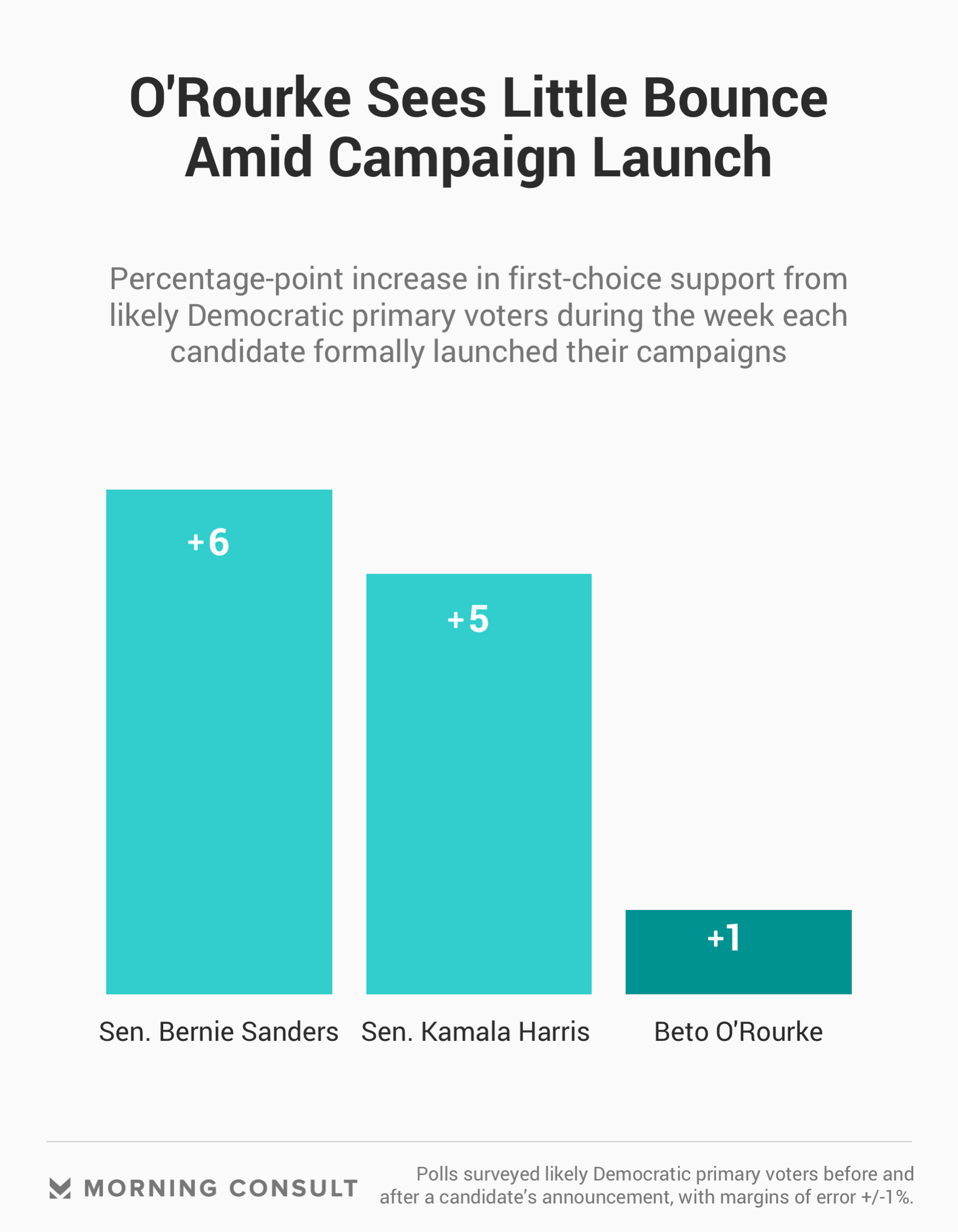 Harris, who began her campaign on Martin Luther King Jr. Day, saw a bump of 5 percentage points as Democrats’ first-choice pick in Morning Consult tracking (she launched her campaign on the first day of the poll, on Jan. 21), though that boost lacked staying power. And Sanders, who started his campaign Feb. 19, the second day of that week’s poll, saw a 6-point jump to 27 percent, where he’s stayed in the weeks since.

A post-announcement bump on the first-choice question is not the rule. According to Morning Consult tracking, most candidates – including Sens. Amy Klobuchar of Minnesota and Cory Booker of New Jersey – saw no measurable increase in first-choice support in the week they began their campaigns, and the views of voters who expressed opinions about them has stayed about the same.

Related: Democratic Voters Would Rather Have a Leader Who Heals Than Fights

As new candidates have entered the race, former Vice President Joe Biden is weighing heavily on the minds of the party’s voters, who, by a wide margin, prefer a candidate who can heal division in the country to someone who will fight back and move the country in a different direction.

Related: Why Biden’s Still in the Driver’s Seat Despite Sanders’ Rise

The greatest share of Democratic primary voters (35 percent) ranked Biden their first choice in the latest survey, his highest marks since Morning Consult began tracking. The 4-point increase since the previous week came as the former vice president made remarks during appearances last week that signaled that he was moving closer to the possibility of a third presidential campaign.

The Delaware Democrat is doing even better in early primary states: Thirty-nine percent of Democratic primary voters in Iowa, Nevada, New Hampshire and South Carolina said they’d pick Biden as their first choice, compared with 28 percent who would pick Sanders.