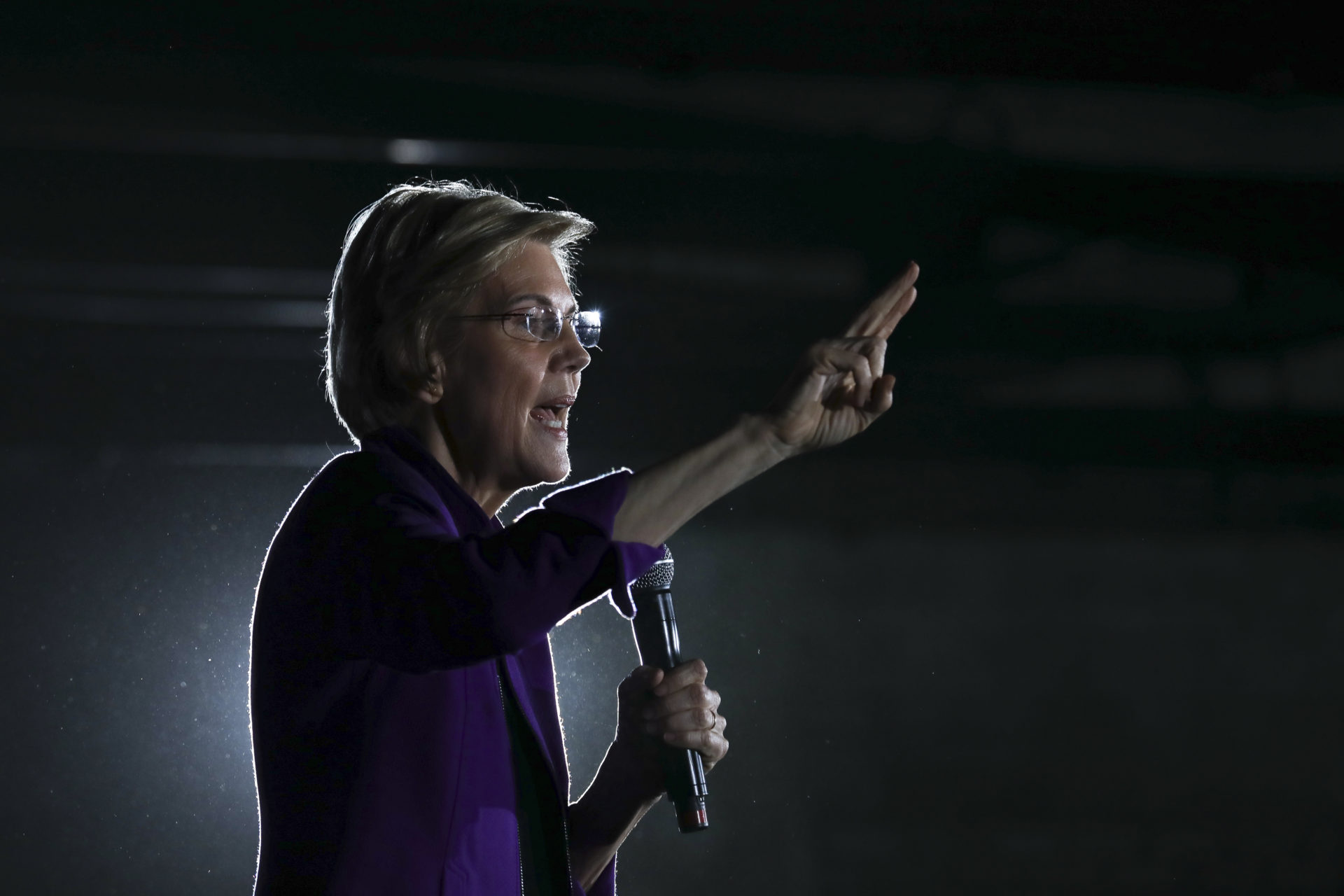 Sen. Elizabeth Warren (D-Mass.) at an event for her 2020 presidential campaign on March 8 in New York. Warren has called for breakup of some of the nation's biggest technology companies, including Amazon.com Inc., Google and Facebook Inc. (Photo by Drew Angerer/Getty Images)
By Sam Sabin

In Capitol Hill’s renewed push to take on big tech giants, companies like Amazon.com Inc. and Google are facing not just a potentially huge hit to their way of doing business — they are also risking reputational harm if any of the suggested regulations keep them from providing the services consumers have come to expect from them, experts say.

In terms of popularity, Amazon and Google have the most to lose, as they reign supreme in Morning Consult’s 2019 Most Loved Brands report, released Wednesday. The report ranks companies via a proprietary index that incorporates consumer views of a brand’s favorability, perceived community impact, trust to do the right thing and consumers’ willingness to promote a brand. (The index’s methodology is explained at the bottom of the report.) Amazon was No. 1, with a total index score of 261.9, with Google following close behind with 261.1.

Will Rinehart, director of technology and innovation policy at the American Action Forum, which supports limited tech regulation, cited the breakup of Bell Telephone Co. in 1984, which laid the foundation for AT&T Inc., as an example of how regulatory action can lead to an erosion of a company’s popularity.

“Before it was broken up, it was a beloved company,” Rinehart said. Now, he said, AT&T is less popular with consumers by comparison. 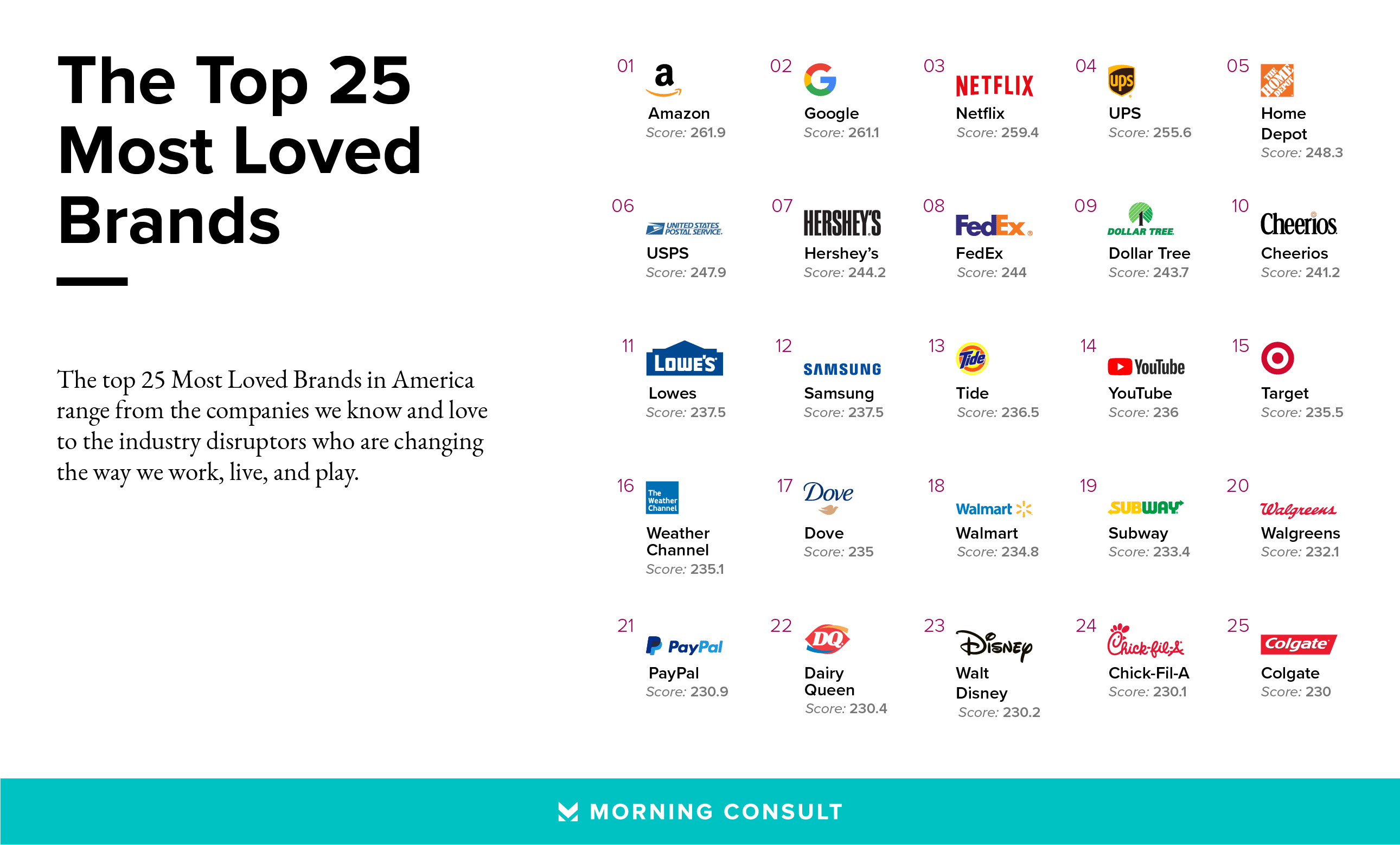 In Amazon’s case, Eunkyu Lee, associate dean for global initiatives and professor of marketing at Syracuse University, said because consumer loyalty is more dependent on the quality of Amazon’s services rather than on an emotional connection with the brand, the retailer would be vulnerable to any regulations that would keep it from offering its popular AmazonBasics merchandise on its own platform, as suggested by Democratic presidential candidate Sen. Elizabeth Warren of Massachusetts.

Other lawmakers have questioned just how much power Amazon, Google and other tech giants hold and whether something needs to be done to lessen that power. Sen. Bernie Sanders (I-Vt.) has challenged Amazon’s wages and alleged tax avoidance. Sen. Josh Hawley (R-Mo.) sent an open letter to Google Chief Executive Sundar Pichai last month asking him to explain the company’s work in China to the public. And Sen. Amy Klobuchar (D-Minn.) kicked off her Democratic presidential campaign with a call for more tech regulation.

Their efforts to rein in big tech companies come as Morning Consult rankings show that many of these brands are beloved by consumers, such as Netflix Inc. and Samsung Electronics Co. (Notable omissions among the big tech group are Facebook Inc. and Apple Inc., which did not make the top 25.)

“That, to me, shows a clear difference between desires in Washington to regulate these tech companies, and perhaps in Silicon Valley or Seattle, and the general populace,” Rinehart said.

However, Rebecca MacKinnon, director of Ranking Digital Rights at New America, which backs the regulation of tech companies, said most consumers aren’t tuned into the problematic business practices targeted by regulations, such as those related to labor, antitrust or data privacy issues, and generally focus more on the quality of the services they receive, such as two-day delivery or low-priced goods from Amazon.

“Maybe they’ll care some decades down the road when the quality of everything deteriorates because there’s no competition, but right now they don’t care because they’re getting cheaper stuff, and they’re getting it same-day,” she said.

Rep. Ro Khanna (D-Calif.) told reporters Monday that moves to break up tech companies, such as Warren’s proposal, are not “effective.” He said lawmakers and regulators should instead focus on making sure companies don’t practice anticompetitive behavior by prioritizing their own products when selling them on the platforms.

The office of Sen. Ted Cruz (R-Texas), who has called Facebook’s content practices a “threat to our democracy,” did not respond to a request for comment, and neither did representatives for Warren, Sanders and Klobuchar. The offices of Sen. Marsha Blackburn (R-Tenn.) and Hawley, who have both called for tougher data privacy regulations, also did not respond to requests for comment.