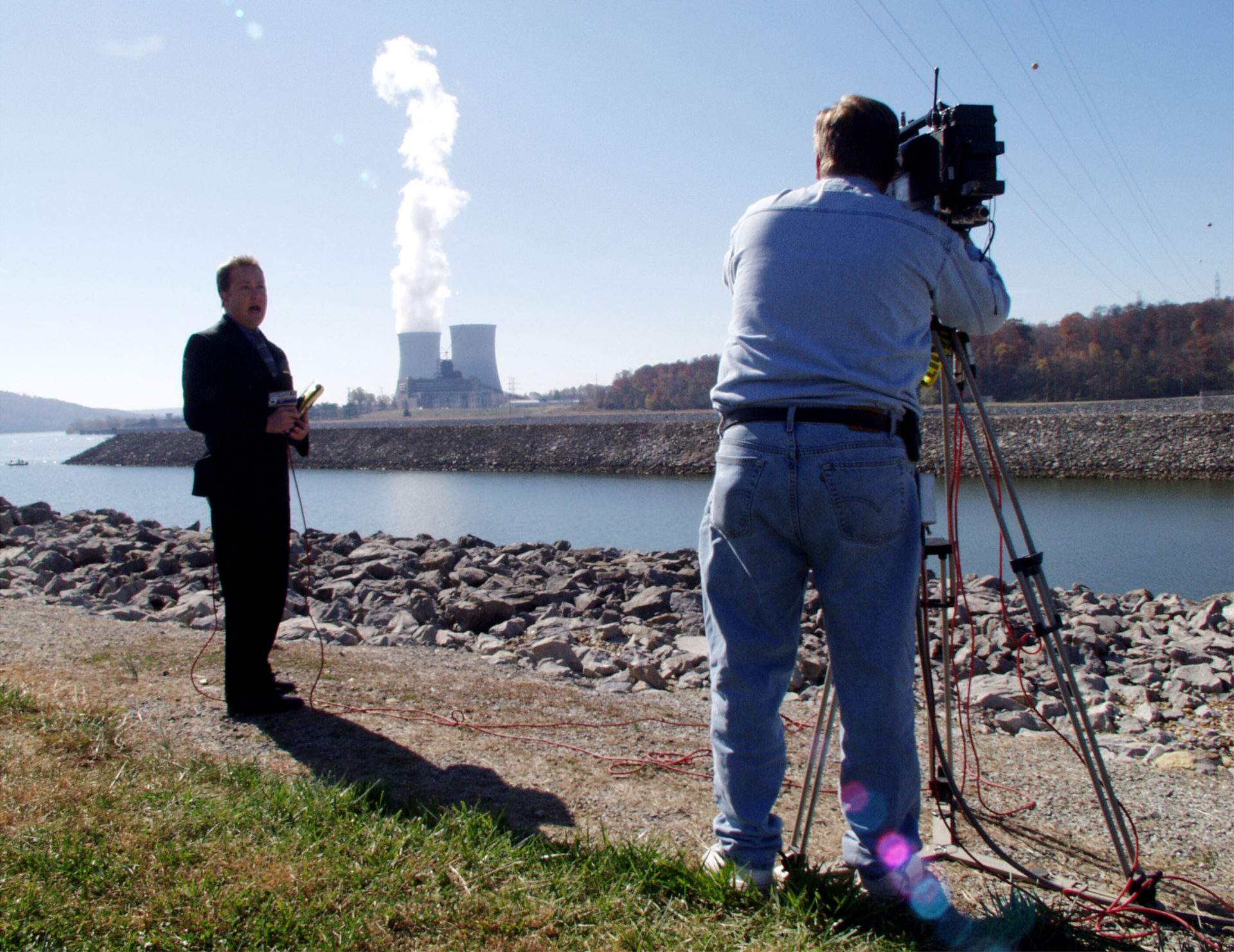 A news crew in Knoxville, Tenn., in front of the Watts Bar Nuclear Plant in Spring City, Tenn., in November 2001. Now that projects like the Watts Bar plant have wrapped up, the new Tennessee Valley Authority CEO, Jeff Lyash, expects TVA's investments “to come down and levelize." (Photo by David Humber/Getty Images)
By Jacqueline Toth

Now that the Tennessee Valley Authority has completed $15 billion worth of projects since 2013 to improve the reliability and efficiency of its generation and transmission system, the authority’s new chief executive said he foresees a slower pace of investments ahead.

Jeff Lyash, who assumed the role of president and CEO of the authority on Monday, said in an interview Tuesday that he expects the federally owned corporation’s investment in those areas “to come down and levelize,” now that projects like combined cycle gas plants and the Watts Bar nuclear plant have wrapped up.

A TVA spokesman said that the authority expects to invest in improvements at a slower rate with less funding in the coming years, since it has made the capital improvements necessary to meet flat-to-declining power demand and has replaced capacity from less-efficient resources with cleaner generation able to support additional renewables down the line.

Lyash, who most recently led Ontario Power Generation Inc., said he intends to carry forward TVA’s emphasis on reducing the greenhouse gas intensity of its energy assets over time, calling reductions in power sector carbon emissions “the right thing to do.”

The way to do that, he said, is to promote energy efficiency, along with wind and solar where it is cost-effective; maximize hydropower and the energy from TVA’s nuclear fleet; use advanced gas-fired resources and let coal “fill a piece of that puzzle” — while remaining mindful of affordability and reliability.

“TVA has one of the most diverse generation mixes in the U.S., and I think that’s a good thing” for serving customers’ best interest, he said.

But he noted TVA must also ensure it is efficient with its coal assets. “If they can’t be cost effective or efficient, then we have decisions to make,” said Lyash. “I think that pressure will build over time.”

The authority, which sells power to 154 local power companies and 58 additional customers in parts of seven U.S. states, has already made strides in reducing the carbon intensity of its generating fleet. From fiscal 2007 to fiscal 2018, the share of coal generation in its portfolio dropped from 58 percent to 26 percent.

TVA’s decarbonization progress was most recently upheld by the authority’s previous leader, Bill Johnson, who joined PG&E Corp., the San Francisco-based utility seen as one of the biggest casualties of climate change because of its equipment’s role in wildfires. Johnson told Reuters this month that TVA is on track to generate over 60 percent of its energy from non-emitting resources by 2020, up from more than 50 percent in 2018.

But Lyash suggested the burden does not lie only with power producers to cut carbon. Resources, he said, should go toward the greatest effective carbon reductions, across power generation, transportation, space heating and industrial sectors.

Lyash enters TVA with a base salary of $920,000, more than $200,000 less than Johnson’s $1.15 million base pay upon departure, according to Securities and Exchange Commission filings. Neither figure includes other incentives, bonuses and payments.

Lyash, a former Nuclear Regulatory Commission inspector who also held a senior role at Duke Energy Corp., said that nuclear should be kept as part of the nation’s generation mix, and that companies and the government should encourage it as long as the resource is cost-effective, safe and reliable.

And “we should exploit” the drop in solar energy prices, he said. This month, TVA announced another request for proposals for 200 megawatts of renewable energy; the previous RFP resulted in almost 675 MW of solar power development to power Facebook Inc. and Google Inc. data centers, according to the authority.

Brought on by the Senate-confirmed TVA board, Lyash started his job just as the public comment period closed on TVA’s Draft 2019 Integrated Resource Plan, the agency’s strategy for meeting power demand over the next 20 years.

The draft plan identifies no additional baseload resources added to the fuel mix to fill projected potential gaps in capacity, except perhaps small modular reactors, which are smaller nuclear plants whose development TVA is watching, Lyash said, in part through its early site permit for such a reactor at the Clinch River Nuclear site roughly 25 miles outside of Knoxville, Tenn.

Lyash said TVA does not currently have a plan to build more baseload assets, including coal plants, but that could change over time depending in part on the economy and load growth.

TVA made headlines in February when it approved the planned retirement of two coal units, one in 2020 and one in 2023, despite pressure from Senate Majority Leader Mitch McConnell (R-Ky.) and President Donald Trump to keep one of them, the Paradise unit in Kentucky, up and running. The retirements, TVA concluded, would save customers $320 million while maintaining reliability.

“TVA got everything they needed to out of those two plants,” which have run past their design life, Lyash said. No decisions on additional coal plant retirements are imminent, he added.

Mary Anne Hitt, director of the group’s Beyond Coal campaign, said on Tuesday that she is hopeful that Lyash will continue to move TVA away from coal and accelerate efforts to increase its solar resources.