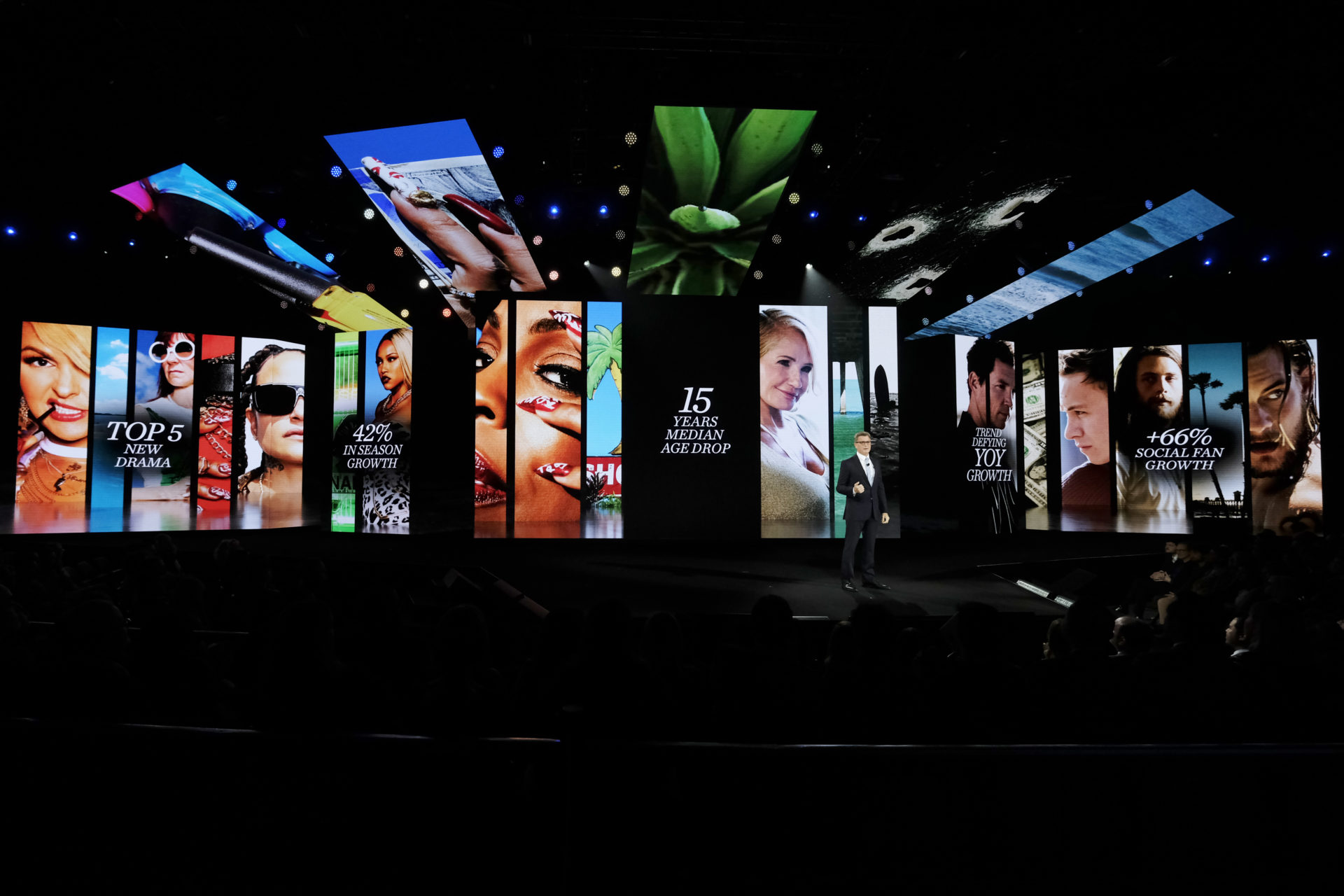 Kevin Reilly, president, TBS and TNT and chief creative officer, Turner Entertainment speaks onstage during the Turner Upfront 2018 show at The Theater at Madison Square Garden on May 16, 2018 in New York City. (Photo by Dimitrios Kambouris/Getty Images for Turner)
By Sarah Shevenock

Upfronts are underway, with several media outlets touting brand safety as advertisers begin to decide which program they will align their brands with in the 2019-20 television season.

New polling shows that adults in the key 18-49 demographic are likely to be more forgiving of advertisers that air ads during programs or on networks associated with controversial comments or actions. However, those in the 50+ demo — an important group for Fox News, which has sparked recent brand safety concerns — may not forgive and forget as easily.

The April 4-7 Morning Consult/Hollywood Reporter survey of 2,200 adults found that 59 percent of respondents in the 50+ demographic said companies should take a stand by removing their advertisements from shows when hosts say or do something controversial or offensive. Less than half (49 percent) of those ages 18-49, a key demographic for advertisers, said the same. The poll’s margin of error is 2 percentage points, while the margin of error for the 50+ and 18-49 subgroups is 3 percentage points. 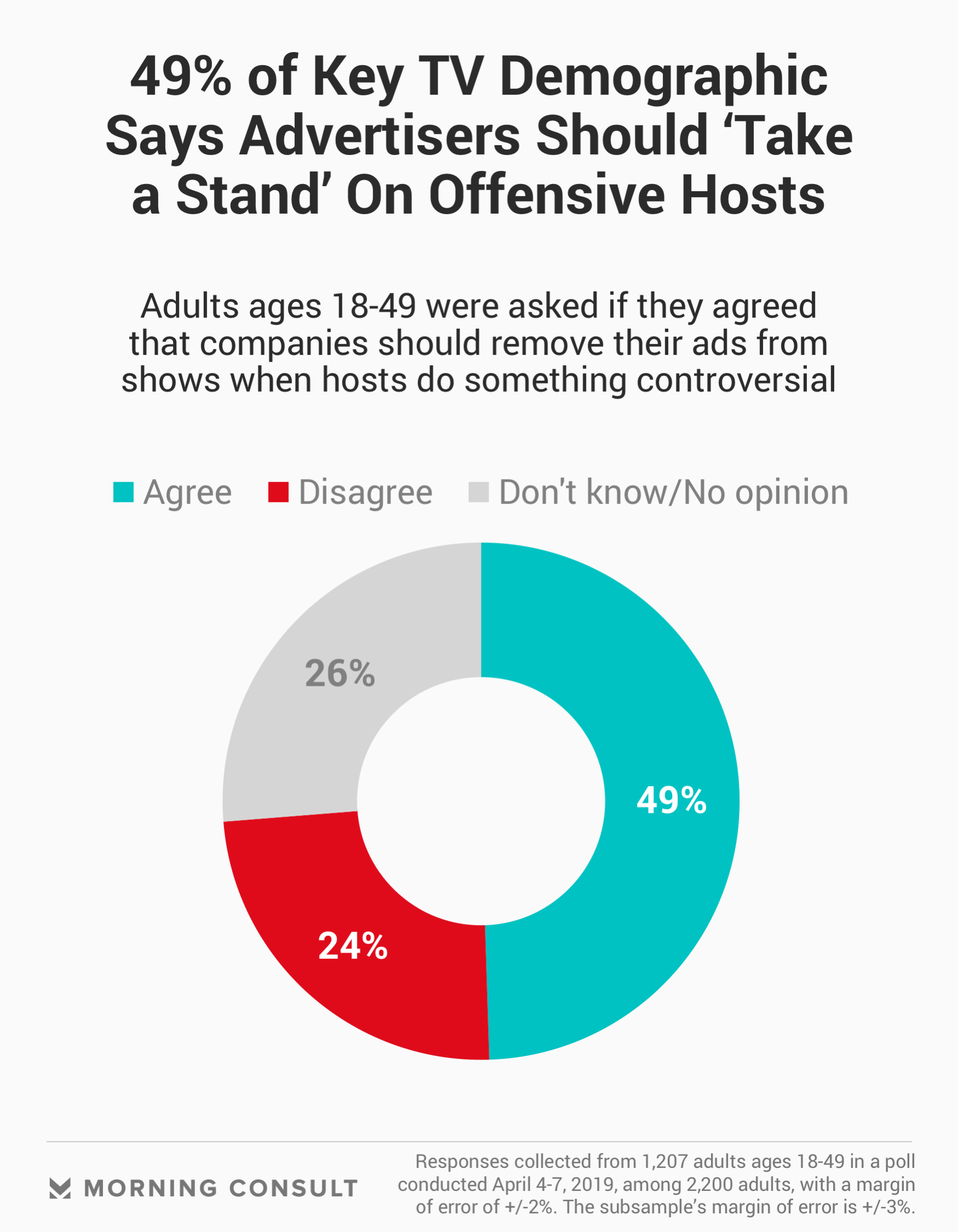 The poll comes after Fox News, whose median viewer in 2017 was age 65, according to Adweek citing Nielsen data, had multiple brands pull advertisements from programs hosted by Tucker Carlson and Jeanine Pirro following controversial comments.

After Carlson’s past remarks about women and child rape surfaced last month, several advertisers, including AstraZeneca PLC and Sheex Inc., pulled their ads from his show. Fifty-one percent of those 50+ said they would be less likely to purchase a product or service from a brand airing an ad during a news or talk show whose host made a sexist statement, compared to 41 percent in the 18-49 demo.

Brands such as Allergan PLC, Letgo and NerdWallet Inc. removed their ads from “Justice w/ Judge Jeanine” after Pirro’s comments about Rep. Ilhan Omar (D-Minn.), saying that Omar’s wearing a hijab meant that she was “Sharia-compliant.” Fox News later came out against Pirro’s comments, saying in a statement to The Hollywood Reporter that “we strongly condemn Jeanine Pirro’s comments about Rep. Ilhan Omar.” Forty-six percent of the 18-49 demographic said they would be less likely to purchase a product or service from a brand airing an ad during a news or talk show when a news anchor or a TV personality makes a racist statement, 7 percentage points less than the 53 percent of those 50+ who felt the same way.

Marianne Gambelli, head of ad sales for the network, told AdAge last month that “brand safety is being used too liberally and not necessarily fairly,” and added that advertisers were not leaving the network altogether, but rather “shifting into more of the news programming.”

Both groups were most forgiving of remarks made by television characters, with 22 percent of those 18-49 saying they would be less likely to buy a product if a brand advertised during a show where a character makes a controversial statement, and 33 percent of those 50+ sharing the sentiment. 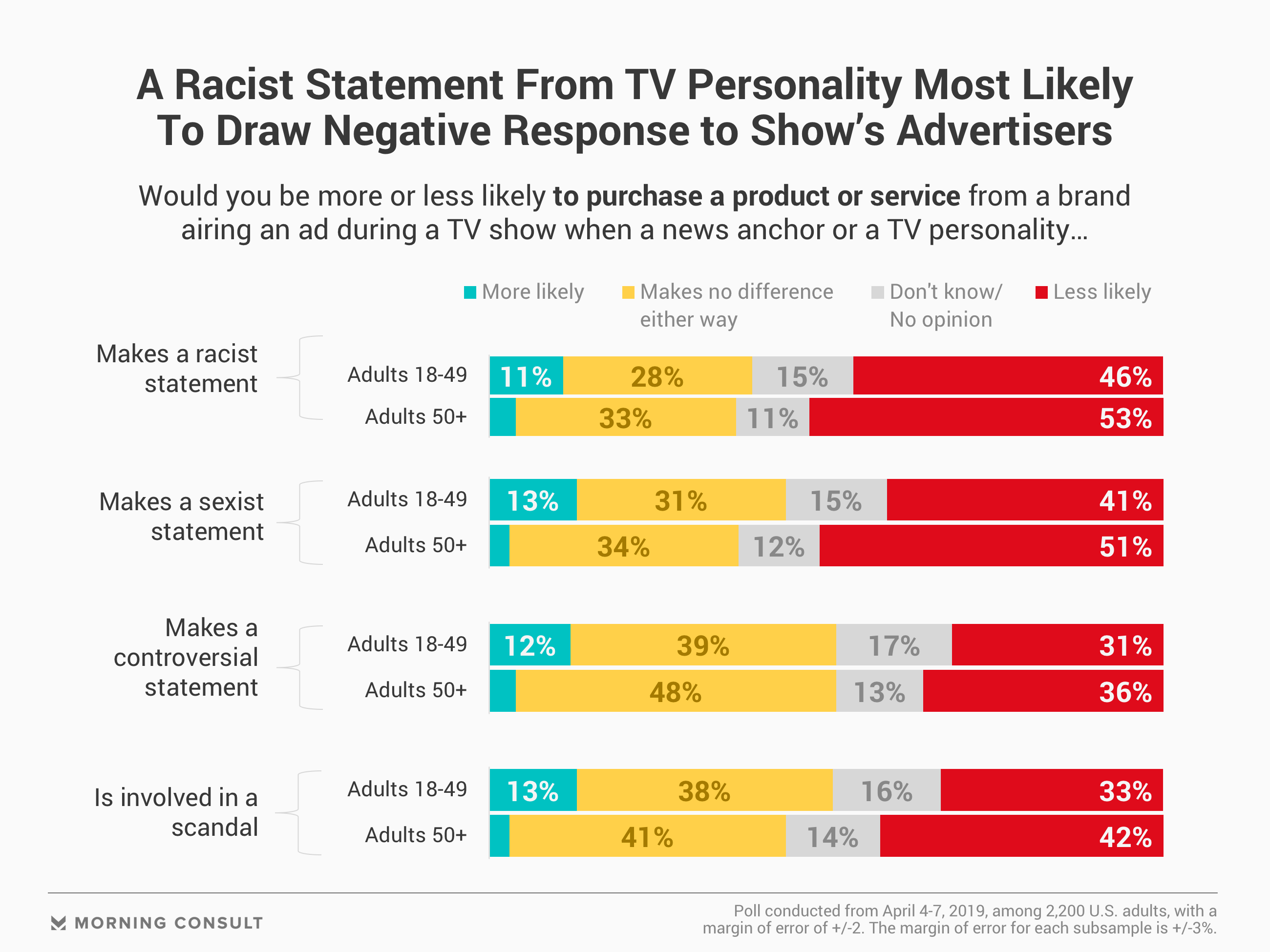 The 50+ demographic was also more likely to oppose brands making social statements in their advertising, with a 64 percent majority saying that ads should not make social statements, compared to 45 percent of those ages 18-49.

Pluralities of those ages 50 and older said they would be less likely to purchase a product if its advertisements called attention to social issues such as racism (34 percent) and homophobia (32 percent). Conversely, pluralities of those ages 18-49 said they would be more likely to purchase a product that used ads to call attention to the same issues.

Related: As Late-Night Hosts Get Political, Audiences Get Divided
Advertising Film and TV