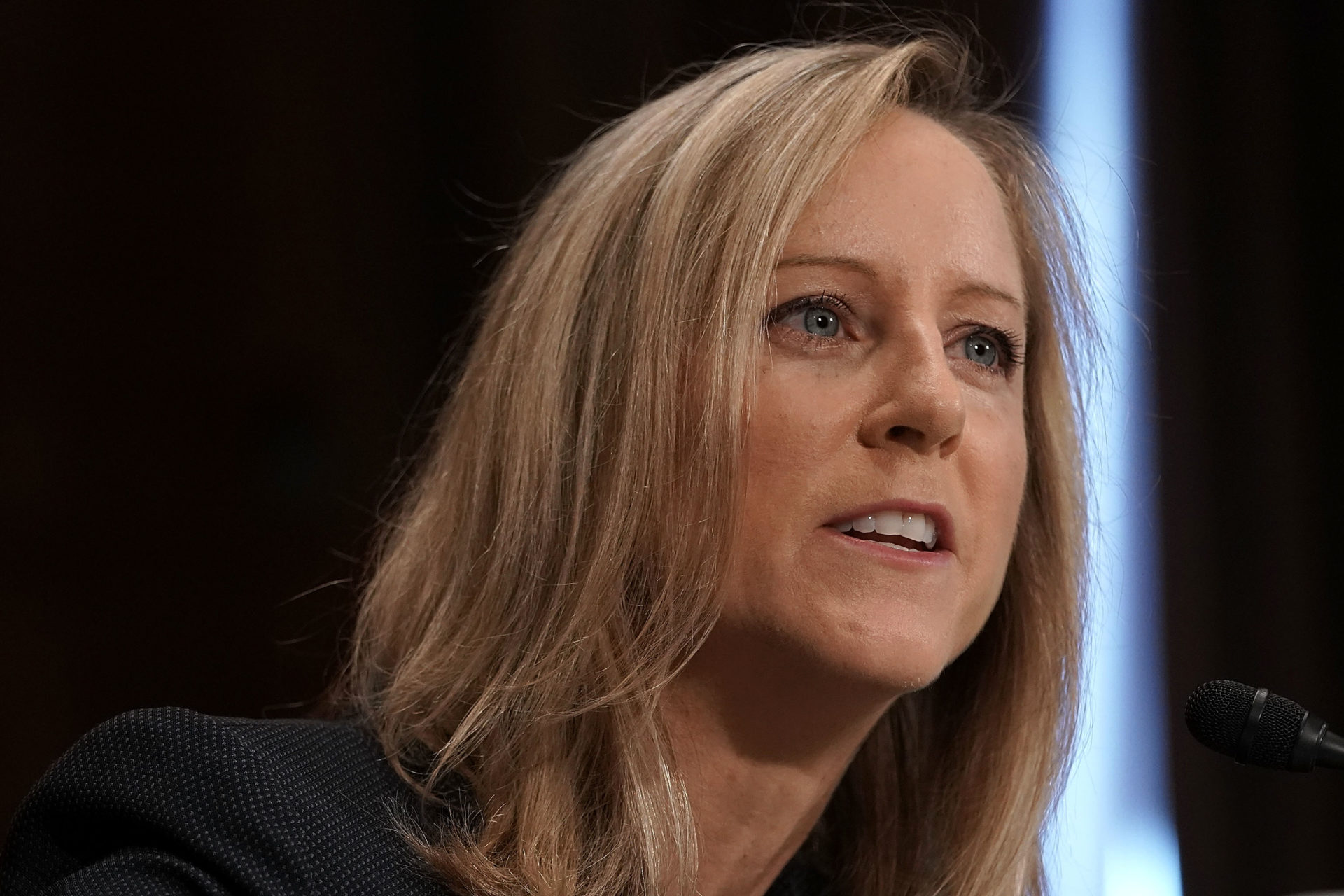 Kathleen Kraninger, then the nominee to lead the Bureau of Consumer Financial Protection, at her confirmation hearing before the Senate Banking Committee in July 2018. On Wednesday, Kraninger said she is taking a different approach with the CFPB compared to Acting Director Mick Mulvaney. (Alex Wong/Getty Images)
By Claire Williams

Kathy Kraninger, the recently installed director of the Consumer Financial Protection Bureau, moved to distance herself from the actions of her predecessor, former acting Director Mick Mulvaney, in her first policy speech on Wednesday.

Kraninger took the helm of the CFPB in December, but aside from answering questions in front of Congress, she had not spoken publicly on her goals. Kraninger came to the CFPB on the heels of Mulvaney, currently the acting White House chief of staff, director of the Office of Management and Budget and her former boss at the OMB.

But despite their previous history of working together, Kraninger said she is approaching the CFPB differently from her previous boss. Mulvaney took a number of controversial steps as head of the CFPB that critics have said were designed to undermine the agency, including trying to change the bureau’s name, cutting staff and requesting a zero-dollar budget one quarter.

“He and I agree completely that we have very different responsibilities and goals as we approach this job,” Kraninger said. “Frankly, my background and the reason the president selected me for this job to begin with, and I like to think the reason Congress confirmed me, is because I am focused on managing the institution to conduct the mission that Congress gave us effectively, efficiently and appropriately.”

One of Kraninger’s first moves as director was to drop the proposed name change, and during her speech, she said she would consider the budget and staffing of the agency, although it probably wouldn’t be as robust as the agency had planned under the Obama administration.

Kraninger said her moves may not grab headlines and that her process running the bureau “can be boring and sound bureaucratic.”

In the coming weeks, for example, the bureau will propose new rules clarifying its debt-collection rule, addressing the number of calls a consumer can receive from debt collectors in a set period of time and how they use technology to do so, Kraninger said.

While Kraninger described running the agency in a different manner compared to Mulvaney, consumer protection experts pointed out that her actions on policy have so far not strayed too far from Mulvaney’s. The CFPB last month pushed forward with a proposal to do away with an underwriting rule for payday lenders, for example.

“She certainly runs a much better charm offensive than Mick Mulvaney,” said Ed Mierzwinski, senior director of federal consumer program at U.S. Public Interest Research Group on Wednesday. “But she has come out of the gate very slowly.”