2020 Will Test the Limits of Trump’s Base-First Approach, Branding Prowess

Anti-socialism message does not currently resonate with voters, polling shows

President Donald Trump is making his opening case for re-election next year by continuing to focus on issues that appeal to his core supporters instead of ones that could expand his electorate.

Rather than move beyond proposals that repel suburban women and other swing voters, such as repealing Obamacare and tightening immigration restrictions, Trump is doubling down on them – a focus that accompanied stinging losses in the House last year, some in states he carried in 2016.

Conservatives are divided on the merits of the strategy: Traditional Republican activists and strategists say Trump should be focusing squarely on the strong economy, while the president’s closest allies say the base-first approach is a necessity as Trump faces an electorate whose views about him are largely baked in.

Trump’s singular focus on intensity and enthusiasm may seem curious on the surface. After all, voter turnout in 2018 — at 50 percent — was the highest in a midterm election since 1914, just 10 percentage points less than the 2016 general election turnout, according to the United States Elections Project. While former President Barack Obama oversaw a substantial dip in turnout from 62 percent in 2008 to 41 percent in 2010, suffering humbling losses in his first midterm election, the so-called “enthusiasm gap” between partisans was a smaller factor in the latest midterm. 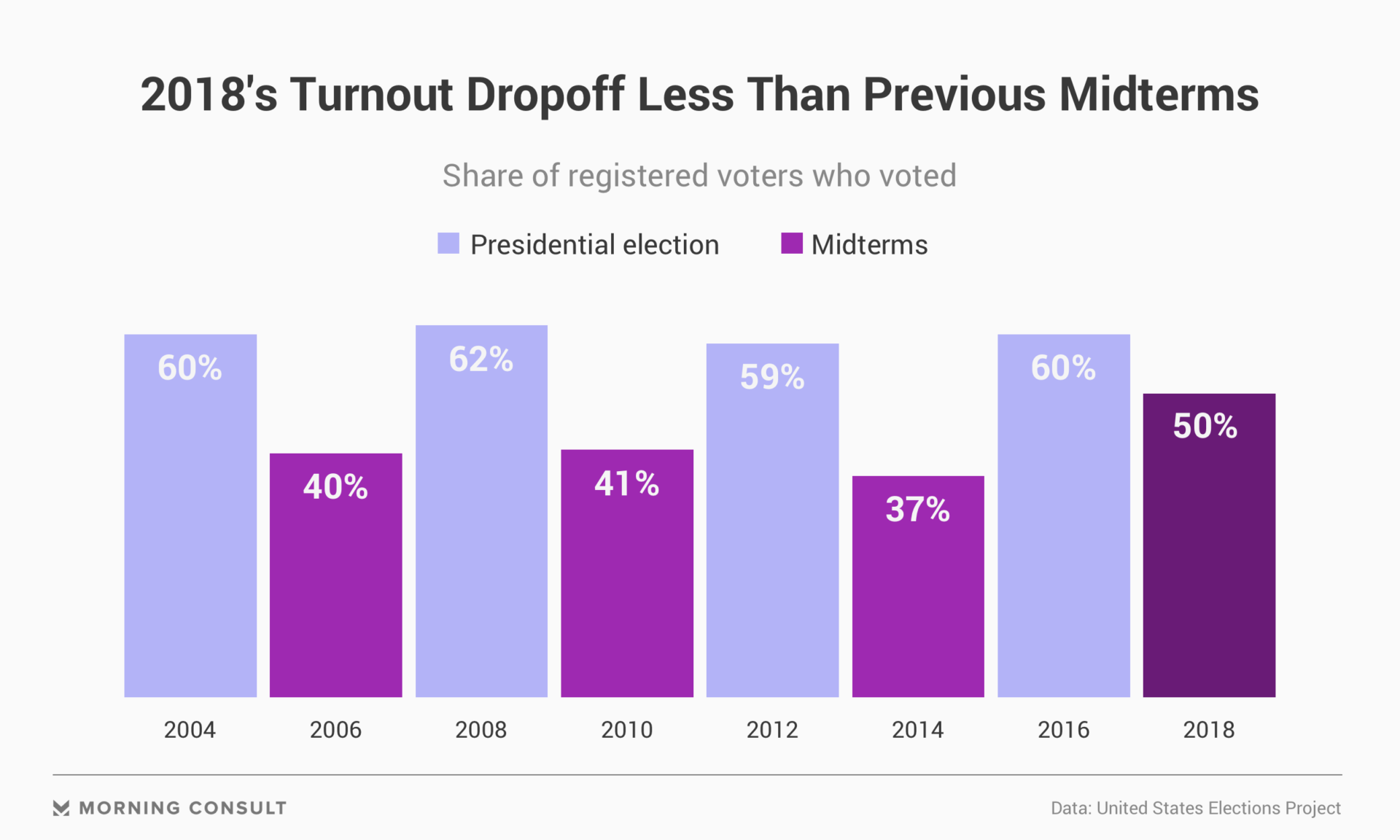 Martha McKenna, a Democratic strategist who worked for the Democratic Senatorial Campaign Committee during much of Obama’s presidency, said Democrats are experiencing an “obviously good bump with swing voters — suburban women who decide elections,” something she said the party will need to maintain in order to win next year.

Michael Steel, a former adviser to Jeb Bush’s 2016 campaign and House Speaker John Boehner of Ohio, said Trump was handed a great opportunity to reach out to that group and widen his support after special counsel Robert Mueller wrapped up his investigation into Russian meddling in the 2016 election. He noted that Trump could have moved on to issues such as criminal justice reform and infrastructure, but instead resumed efforts to overhaul Obama’s signature 2010 health law, the Affordable Care Act — an issue that still animates the GOP base but is a political loser with the broader electorate.

“He seems to consistently work to enhance the turnout and enthusiasm rather than broaden his support,” said Steel, currently a partner at Hamilton Place Strategies. “Time and time again, faced with the opportunity to expand, he’s chosen not to do so.”

Andy Surabian, a Republican strategist and former Trump White House official, said 2020 is an election about motivation rather than persuasion. Specifically on immigration, he said, “if your goal is to turn out every possible Trump voter there is, when they say that it’s their top issue, you can’t ignore that issue.”

Strategists of all stripes acknowledge that opinions on Trump’s job performance are largely set, making the 2020 election less about persuading undecided voters and more about motivation. But while midterm elections serve as a referendum on the commander in chief, presidential cycles are more of a choice between two options.

In a bid to appeal to those suburban and swing voters who backed Democrats in the midterms, Trump and his party have worked hard in recent months to define the opposition in a way that will turn them off — by calling them socialists.

In an interview with Morning Consult earlier this year, Republican National Committee Chairwoman Ronna McDaniel responded to a question about the president’s 2020 message by immediately pivoting to that topic.

“I think the main issue is: Do you want America to stay America right now?” she said. “Democrats are proposing socialism and a total government takeover of health care, our education — expanding government control.”

That pitch comes as several Democratic presidential hopefuls have embraced the pillars of bold progressive policy proposals such as single-payer health care and Democratic Rep. Alexandria Ocasio-Cortez’s signature “Green New Deal” — a leftward drift that even Trump’s most vehement GOP critics say could boost the president.

“You may not like Donald Trump; you make think his character is distasteful, but he’s not as scary as the other guy,” said Charlie Sykes, an influential conservative former radio host who is editor-in-chief of The Bulwark. “This is a strategy for getting Donald Trump re-elected even if he’s got a low approval. If the Democrats continue to move to the left, they make that argument sound more plausible.” 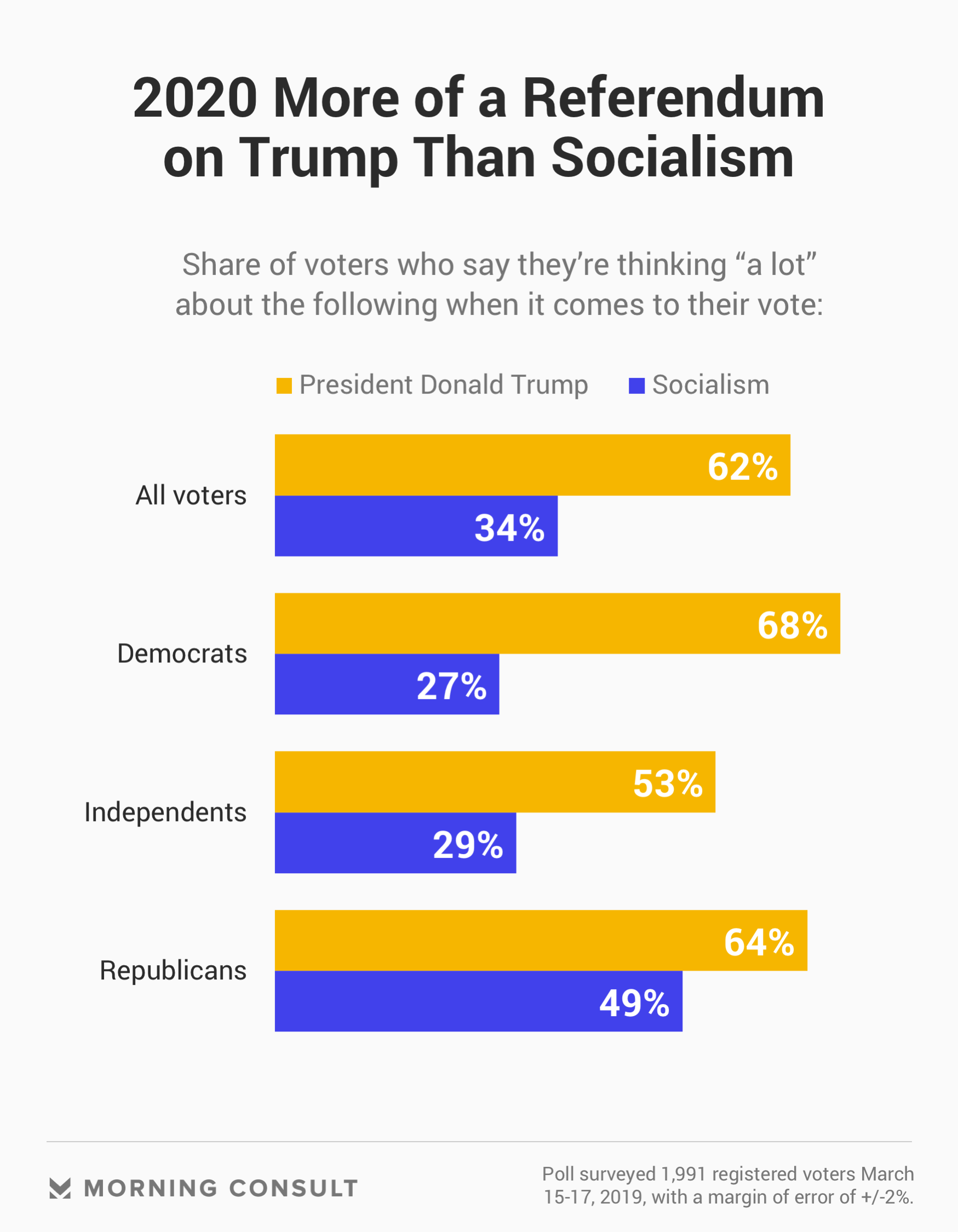 But a recent Morning Consult/Politico survey suggests Republicans have some work to do if they want to reframe the election as a referendum on socialism instead of on the president.

A Morning Consult poll from January also indicated that the current enthusiasm gap may be in the Democratic Party’s favor, with 3 in 5 Democrats saying they were “more enthusiastic about voting” in 2020 than “in previous elections,” compared with 49 percent of Republicans who agreed.

McKenna said the president has been a uniting force for the party’s coalition, though she cautioned that Democrats should not get “cocky” about the next election, viewing the prospect of another Trump term as “terrifying.”

“Trump has a really solid base and they do turn out when they need to,” she said.