How the ‘Medicare for All’ Messaging Battle Can Be Won, or Lost

Ability to keep current hospital and doctor, enroll voluntarily would sway most opponents As some leading Democrats push a bolder vision for delivering on the party’s decades-long aspiration of universal health care, intraparty dissonance threatens to derail that effort before it has even begun, with establishment Democrats and progressives sparring over how to satiate the appetite for dramatic overhaul without alienating Americans fearful of disruption.

Support for “Medicare for All” has fallen since the 2018 midterm elections, as Republicans have gone on the offensive, branding it as an embrace of socialism and a government takeover of health care.

The underpinnings of much of the discourse surrounding the controversial policy are rooted in genuine debate surrounding what “Medicare for All” means in the first place — and muddled definitions have left Americans relying more on what they’d like to see in the plan than on what’s truly there as they build their outlook. Democratic presidential aspirants, eager to please steadfast believers, wary optimists and skeptics alike, appear to be in no rush to alleviate the ambiguity.

And when it comes to making a case to Americans, a new Morning Consult survey probing public opinion on Medicare for All — defined as a system where all Americans are automatically enrolled in a government-run health plan that replaces all duplicative private coverage — indicates language will go a long way.

The survey of 6,600 U.S. adults found that both supporters and opponents are highly susceptible to messaging, shedding light on why candidates, in the early stages of curating their policy platforms, are casting nets wide enough to accommodate convictions in flux and the reality that the eventual legislation will be some hybrid of the different proposals currently on the table.

The poll found that despite the abyss between partisans on health reform, most people want the same thing: a system in which everyone has health insurance, and the right to choose where they get it from, without going bankrupt. And with many months ahead to litigate the merits of Medicare for All, the data suggests the proposal’s proponents are on more fertile ground than its detractors to bring the public to their side. 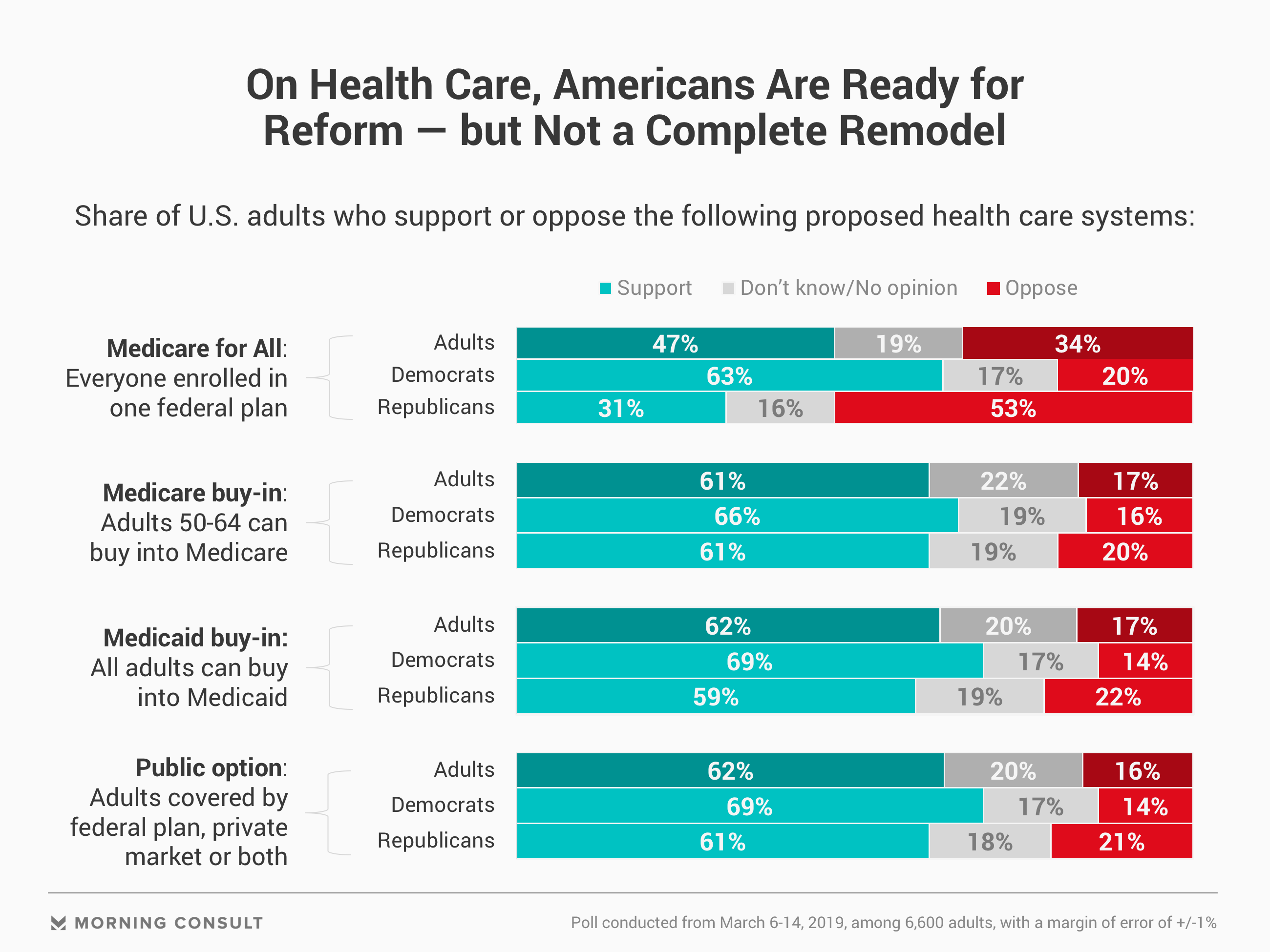 At this stage, it appears dubious that the public will coalesce around one proposal by 2020. The coalition challenging the power of industry stakeholders in the health care system and heralding Sen. Bernie Sanders’ (I-Vt.) legislation as the silver bullet solution has frustrated establishment Democrats, and still faces an uphill battle in winning over the public.

But a Medicare for All approach perceived as slightly less disruptive could have tremendous potential, at least on the pathway to eventual single-payer, as there is much more common ground between supporters and opponents than initially meets the eye. In fact, most skeptics can warm quickly to Medicare for All — especially if it takes a page or two from the public option. 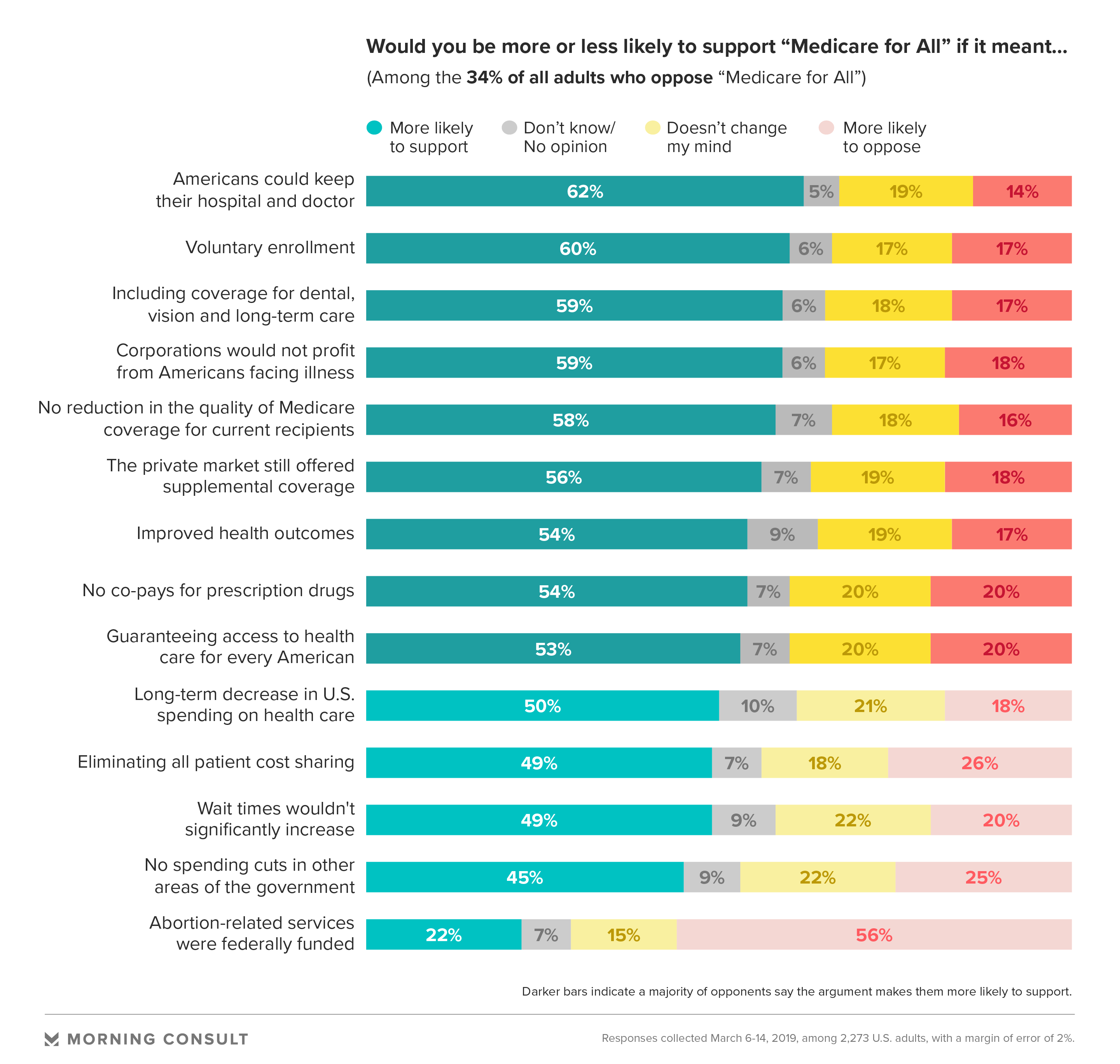 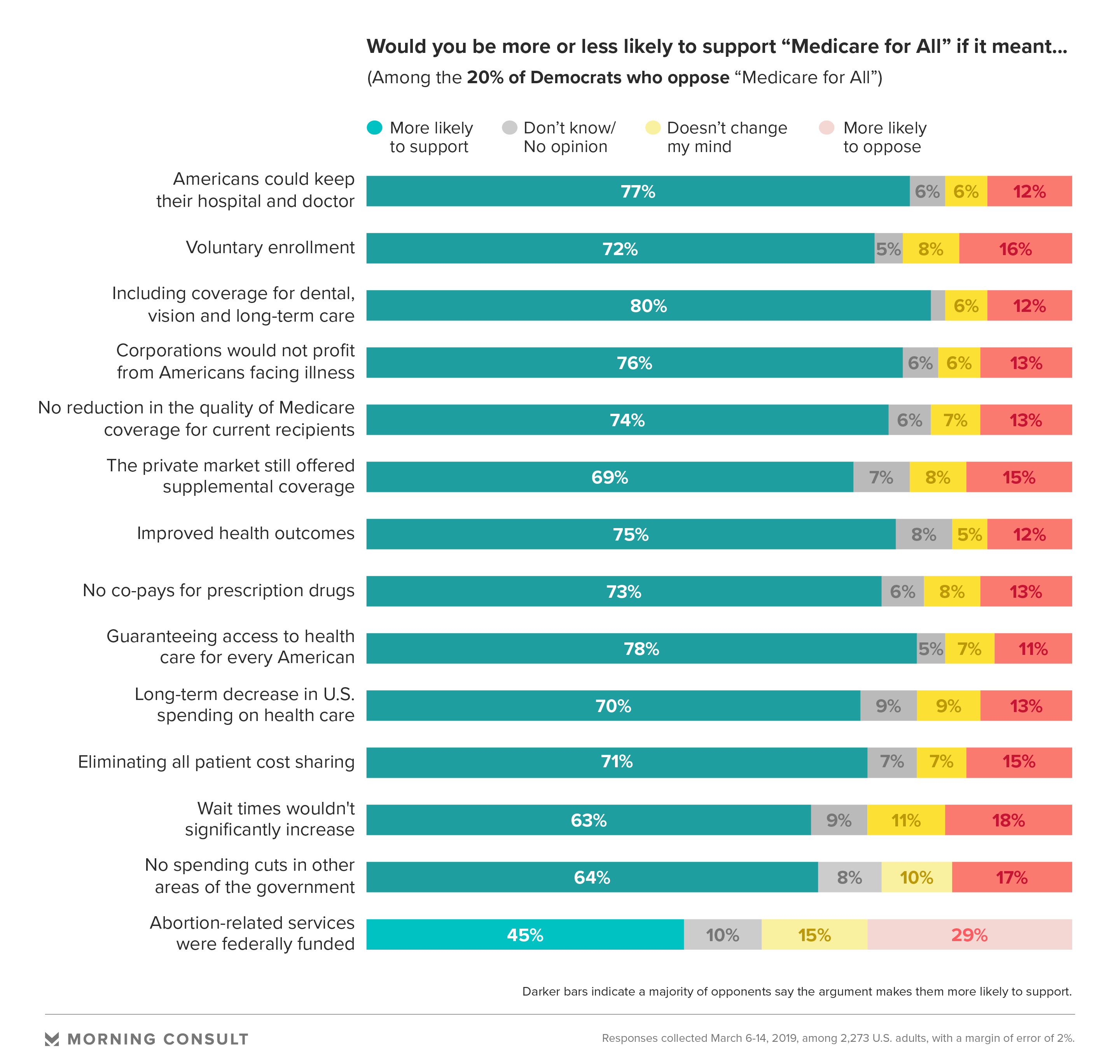 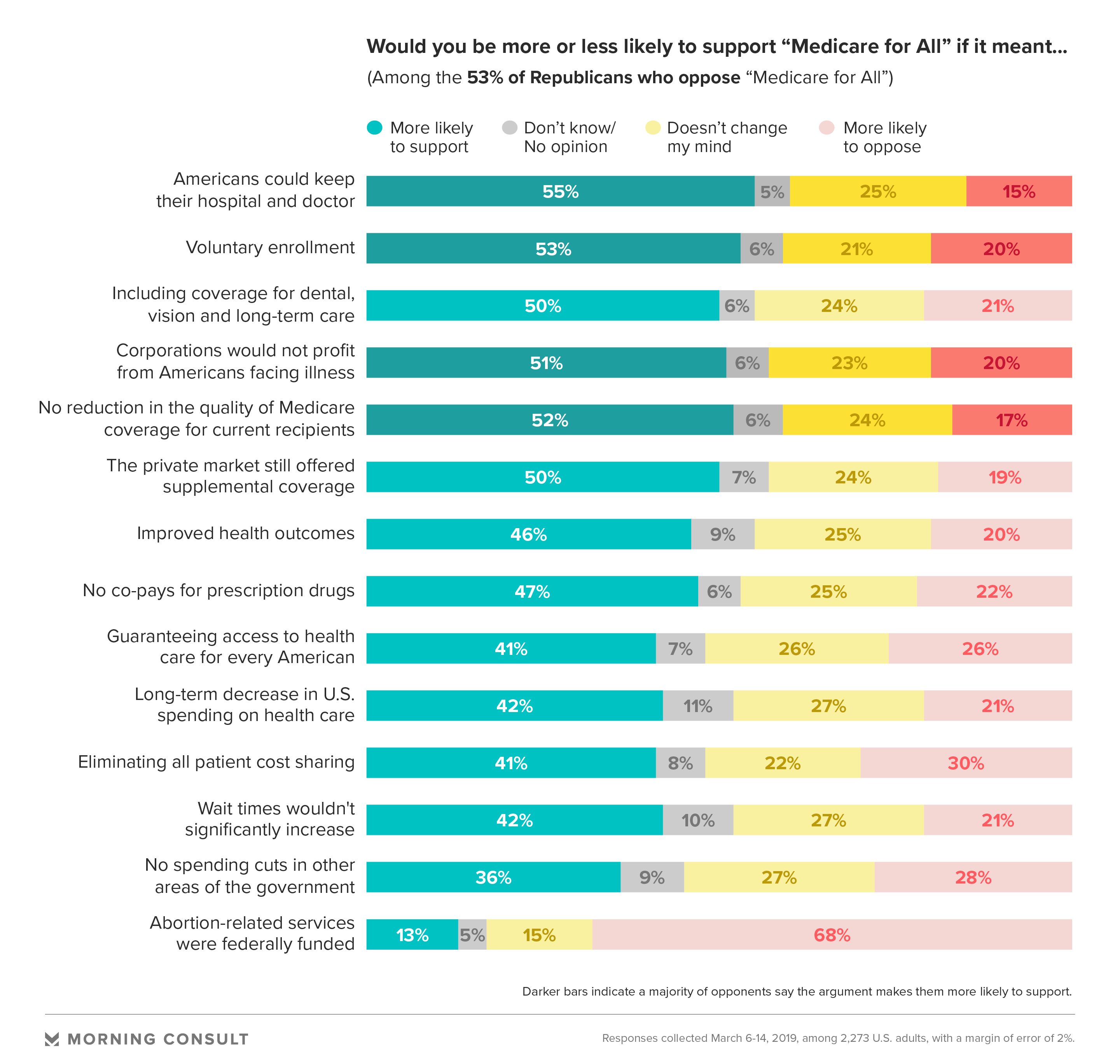 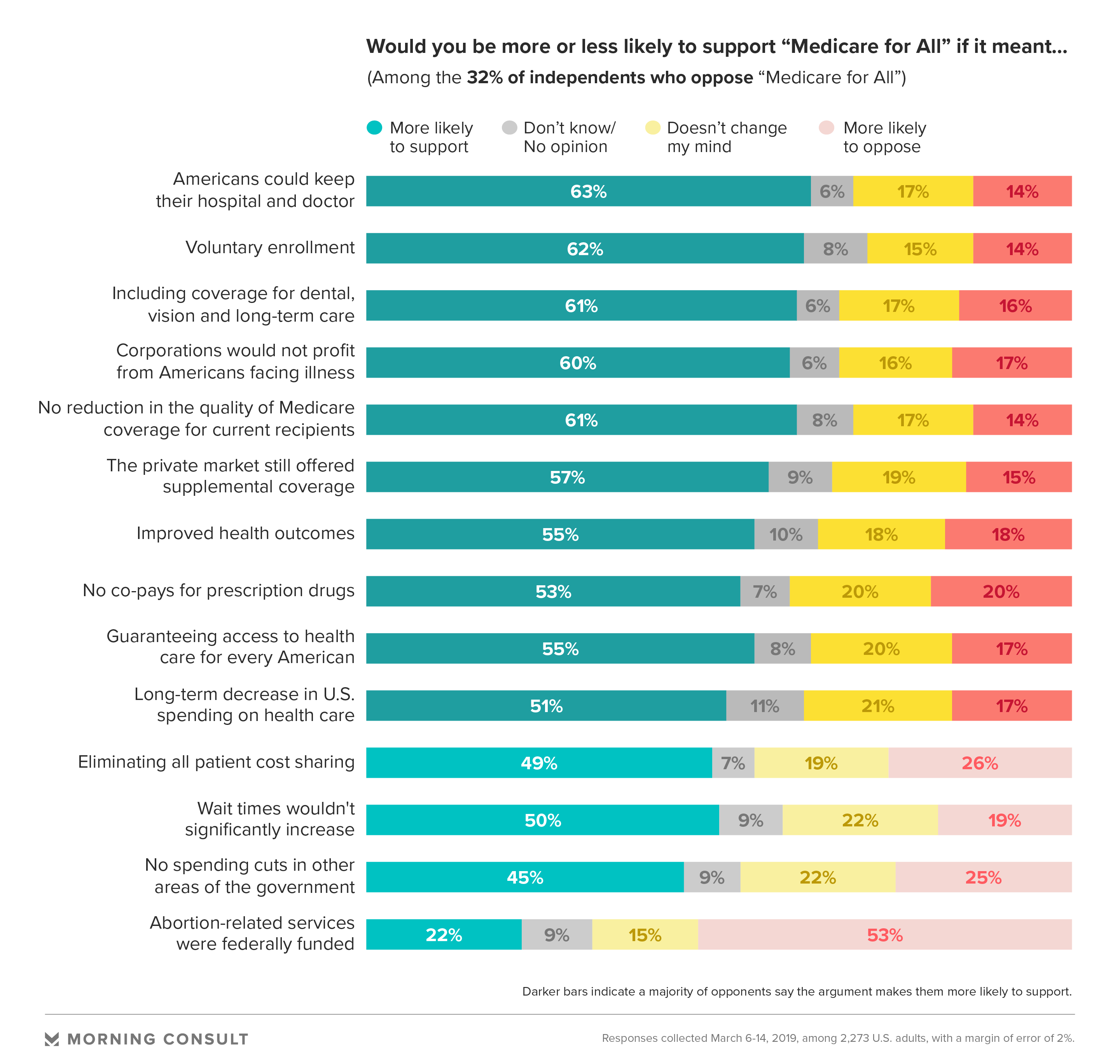 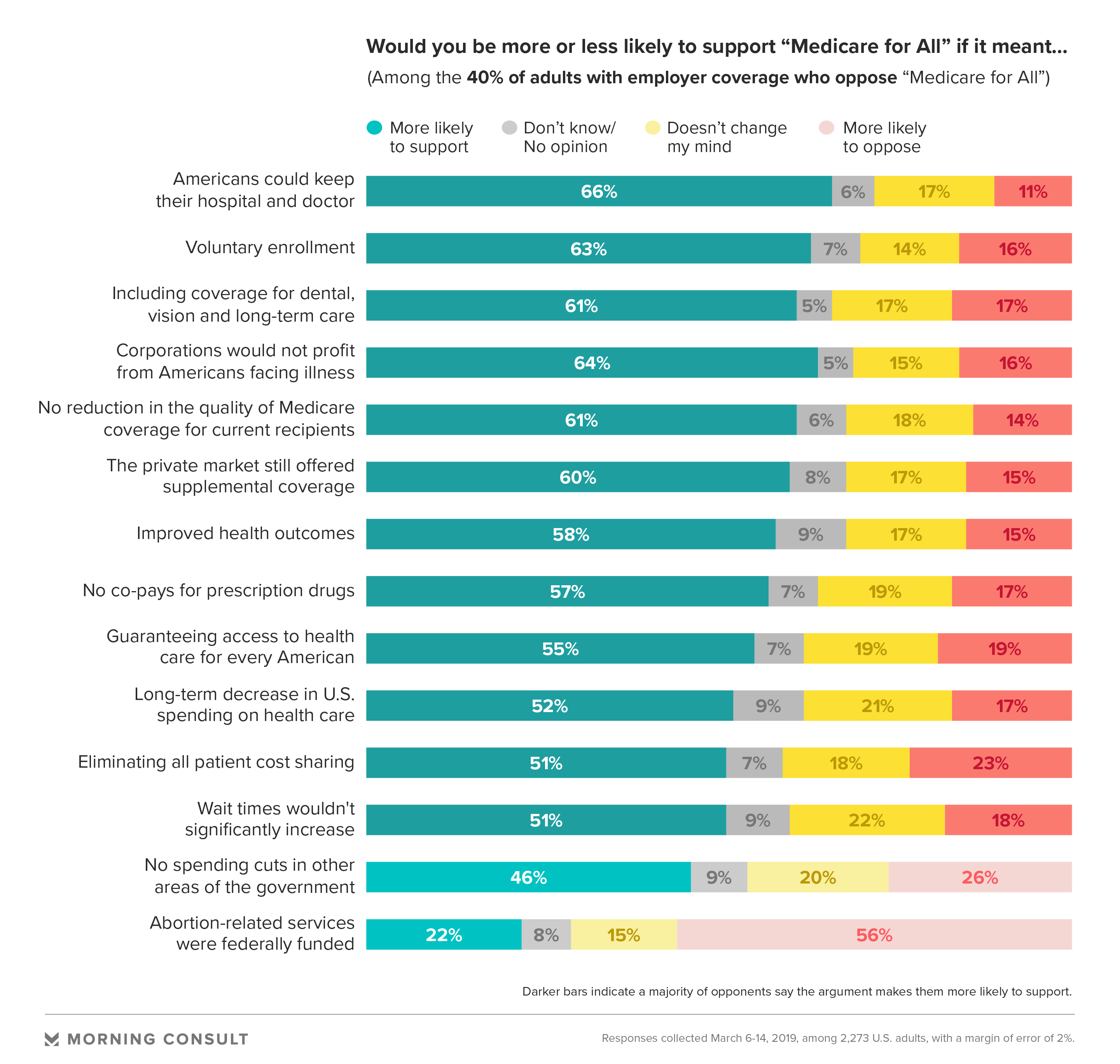 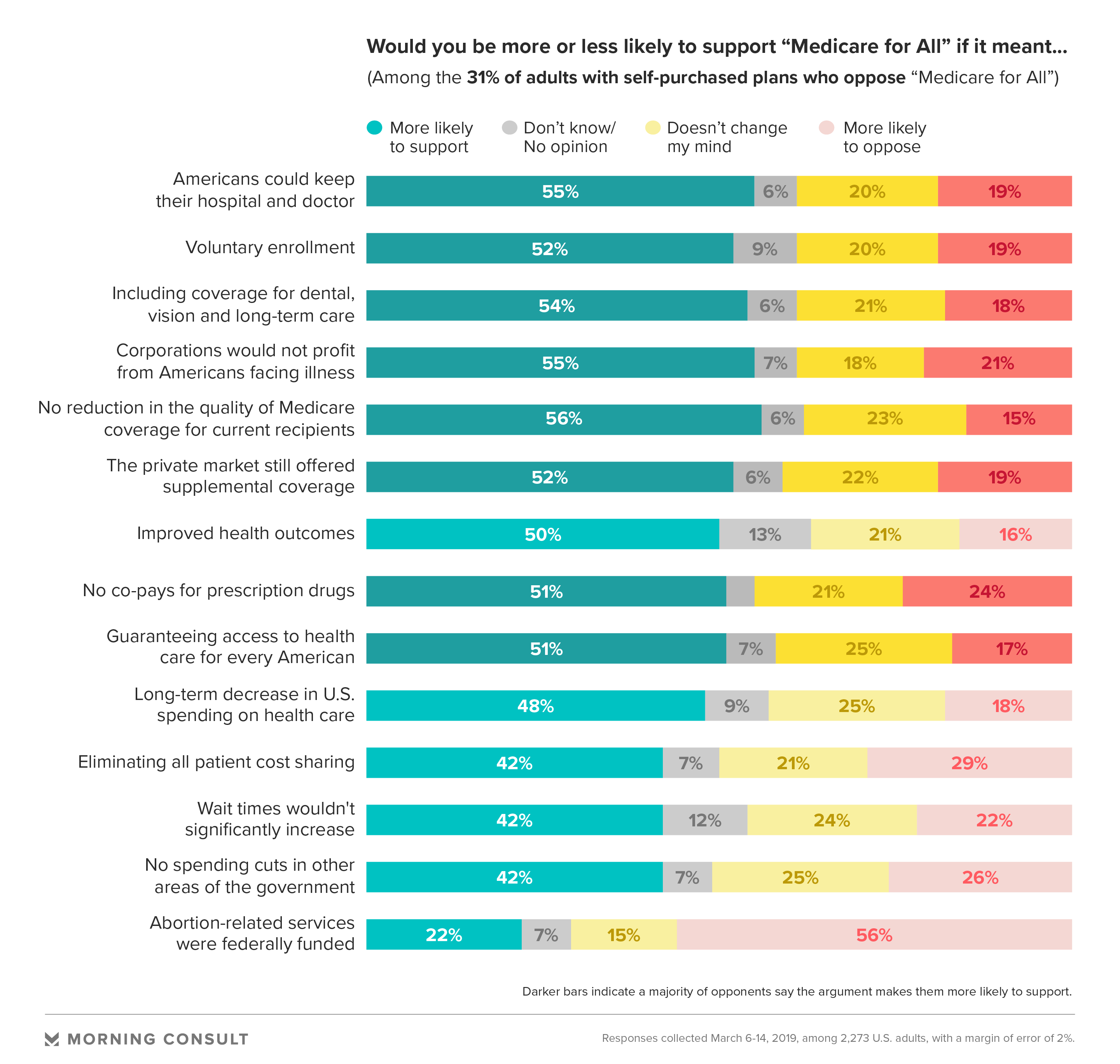 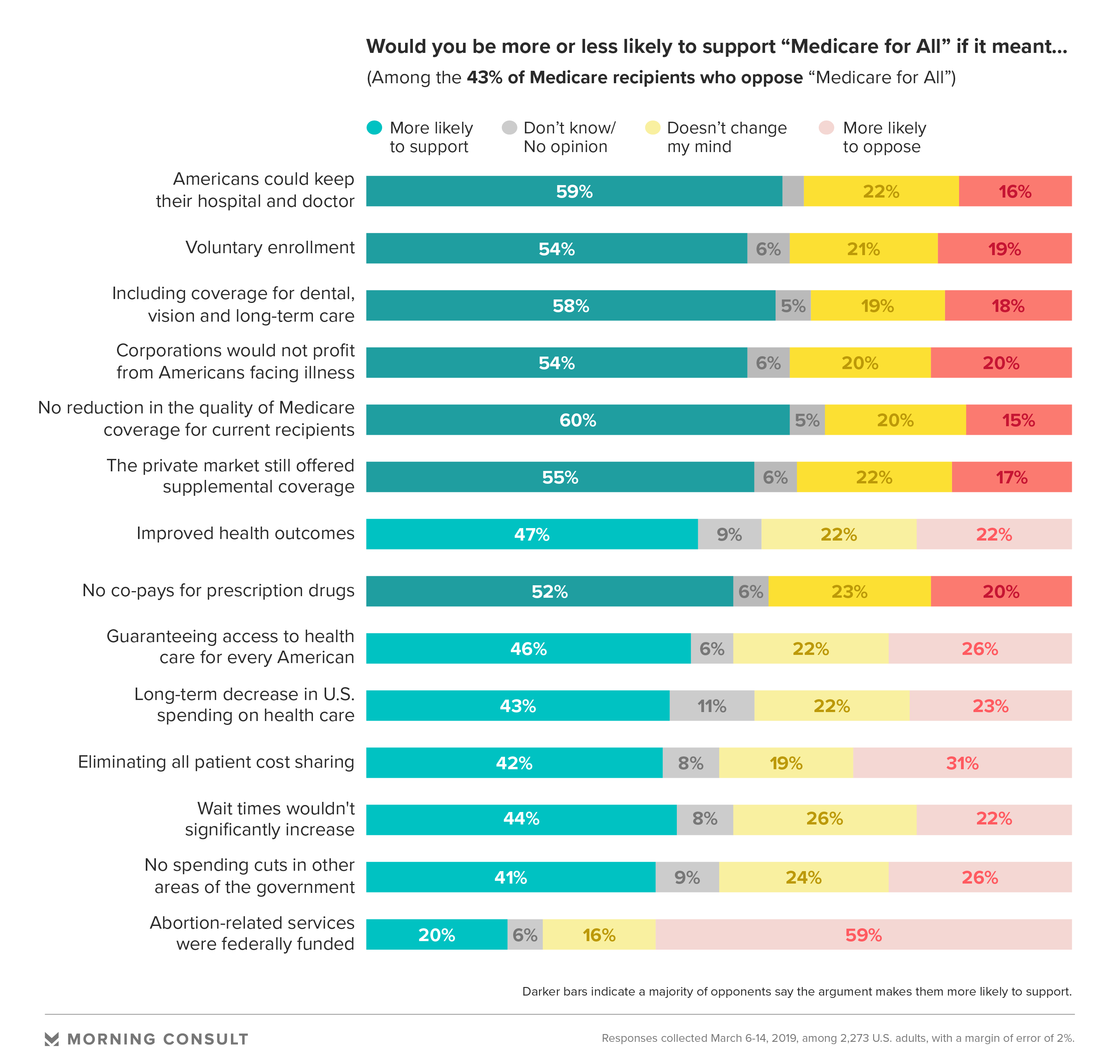 Voluntary enrollment is alluring: Three in 5 Medicare for All opponents say it would increase their likelihood of supporting Medicare for All. In the same vein, 56 percent of opponents are more likely to support a plan that maintains a role for the private market.

While Democratic presidential candidates in the Senate, such as Elizabeth Warren of Massachusetts, Kirsten Gillibrand of New York, Cory Booker of New Jersey and Kamala Harris of California, have endorsed Sanders’ bill, they’ve otherwise treaded carefully on textbook single-payer. However, their support for a plan guaranteeing universal coverage without nixing employer-sponsored plans has been unwavering.

“Medicare for America,” introduced in the 115th Congress by Democratic Reps. Rosa DeLauro of Connecticut and Jan Schakowsky of Illinois, who plan to bring forward the revised legislation within weeks, vows to do just that, and it has scored an early endorsement from another 2020 candidate, former Texas Rep. Beto O’Rourke.

Topher Spiro, a lead author of the Center for American Progress’ “Medicare Extra” plan (the bedrock for the DeLauro and Schakowsky bill), said the Morning Consult poll confirms that this approach – that is, Medicare for All for those who want it – is extremely popular not only with Democrats, but the broader electorate.

The poll also revealed some of the hesitation toward Medicare for All may be driven by lack of information.

Sixty-two percent of opponents said they were more likely to support a plan that allows them to keep their hospital and doctor (under Sanders’ plan, they could). Nearly an equal share (59 percent) said the same if the Medicare for All plan included dental, vision and long-term care coverage (Sanders’ plan does).

A majority of Medicare for All opponents are enticed when told the plan would eliminate prescription drug co-pays (54 percent), stop corporations and the pharmaceutical industry from profiting off ill Americans (59 percent) and uphold coverage quality for current Medicare beneficiaries (58 percent).

Only one argument — that Medicare for All would extend federal funding for abortion — kept a majority of opponents steadfast in their opposition.

By contrast, a majority of supporters stood their ground in the face of every argument tested except one: The possibility that Medicare for All would denigrate coverage for seniors caused 54 percent of proponents to sour on the plan. 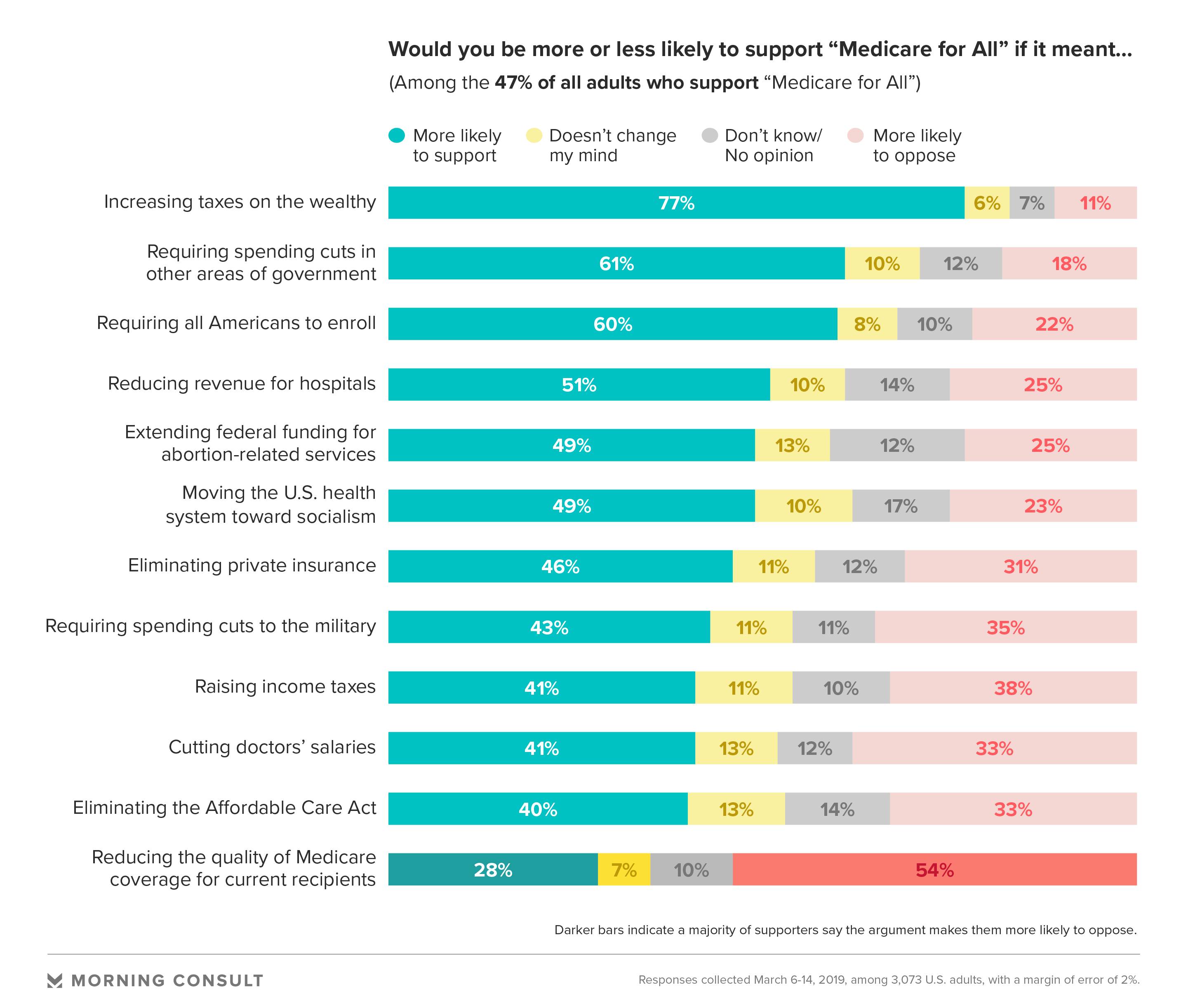 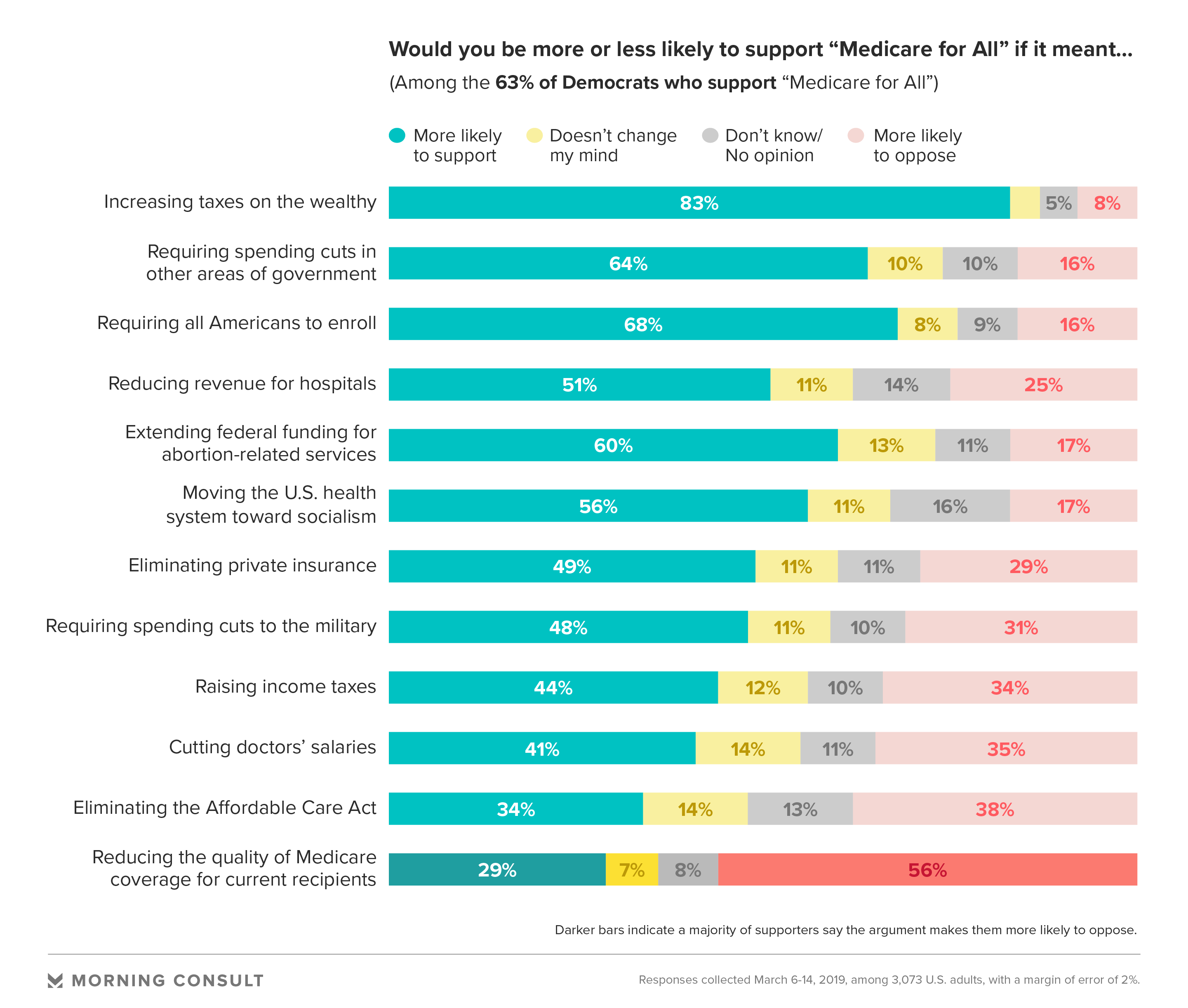 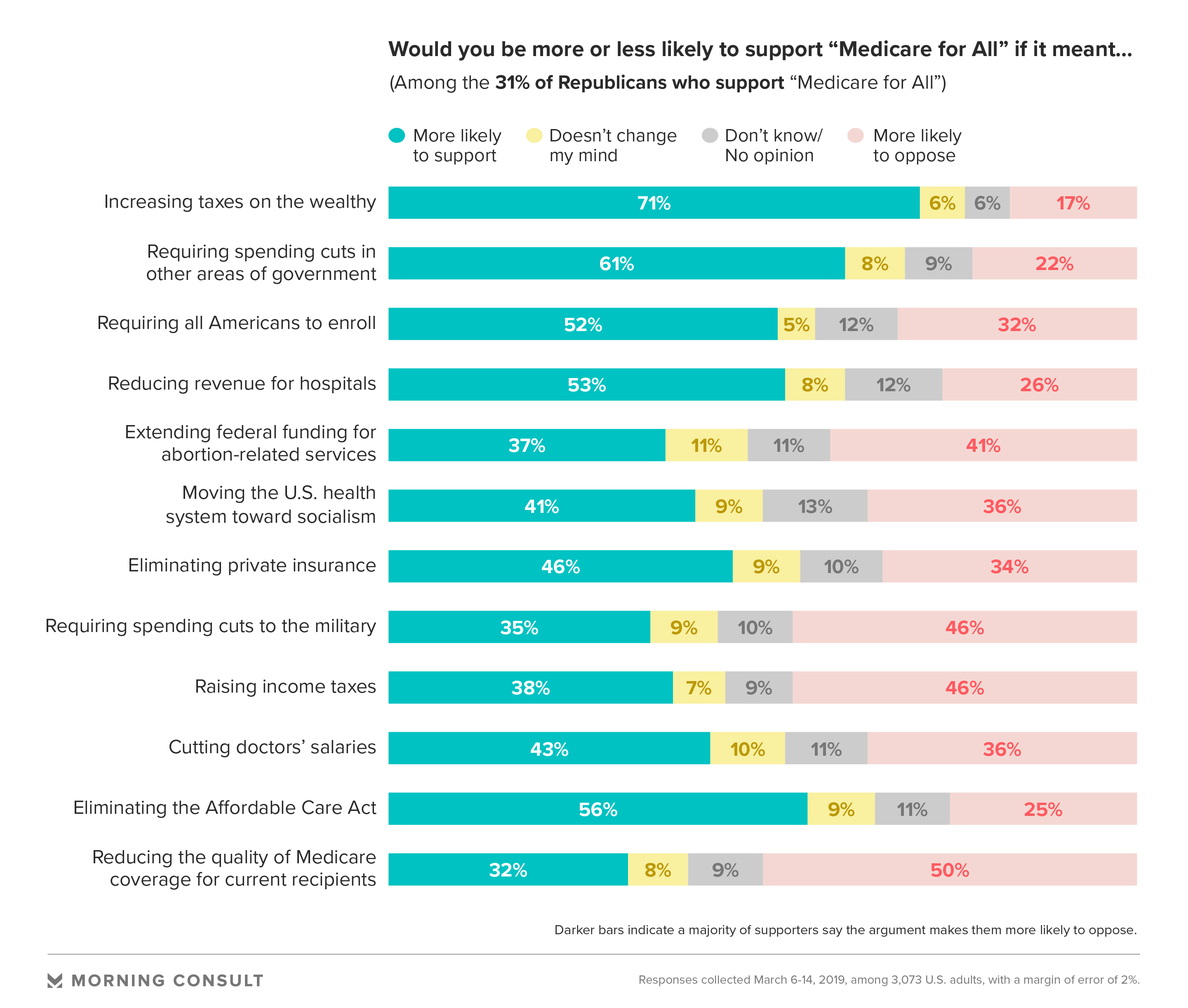 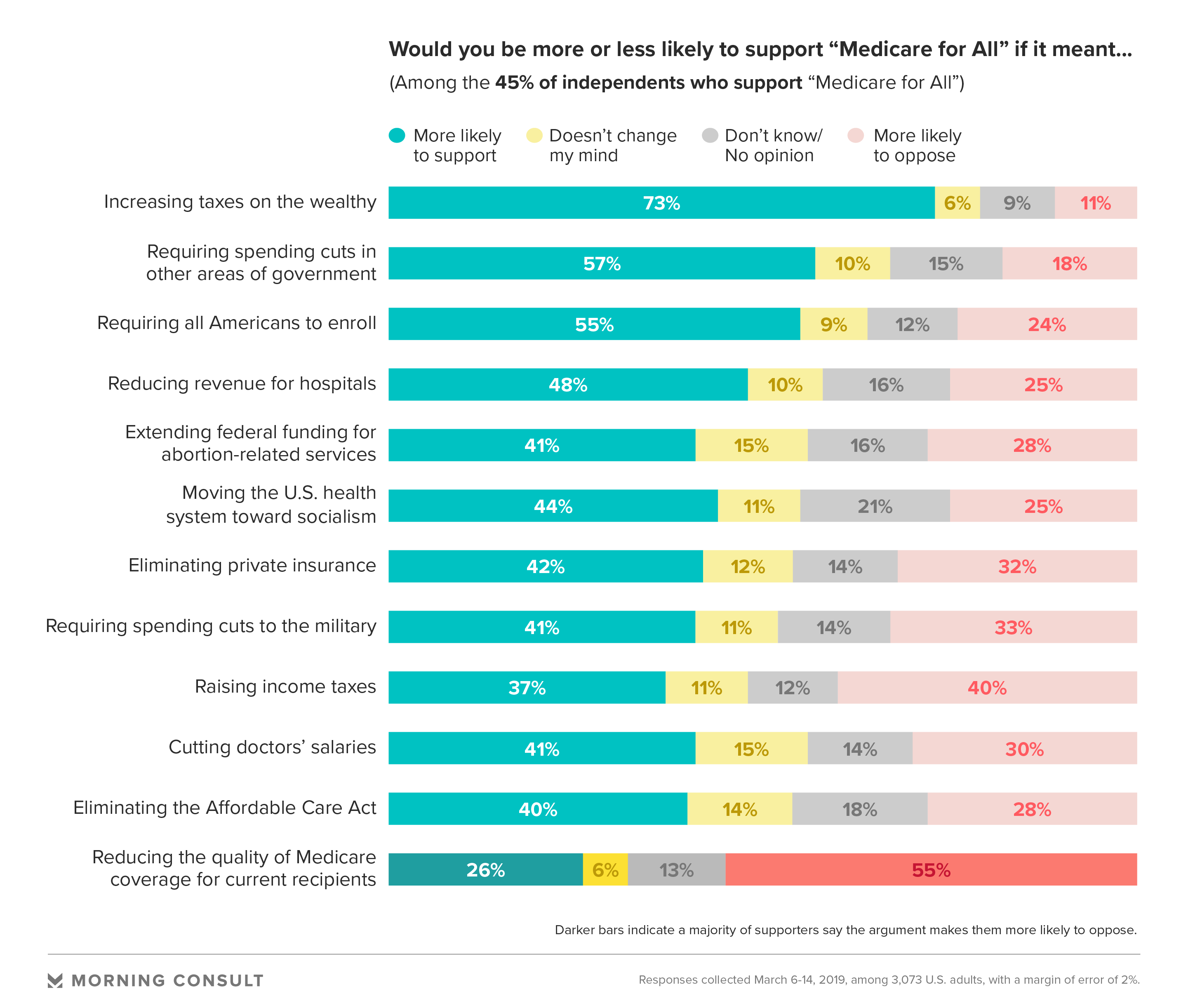 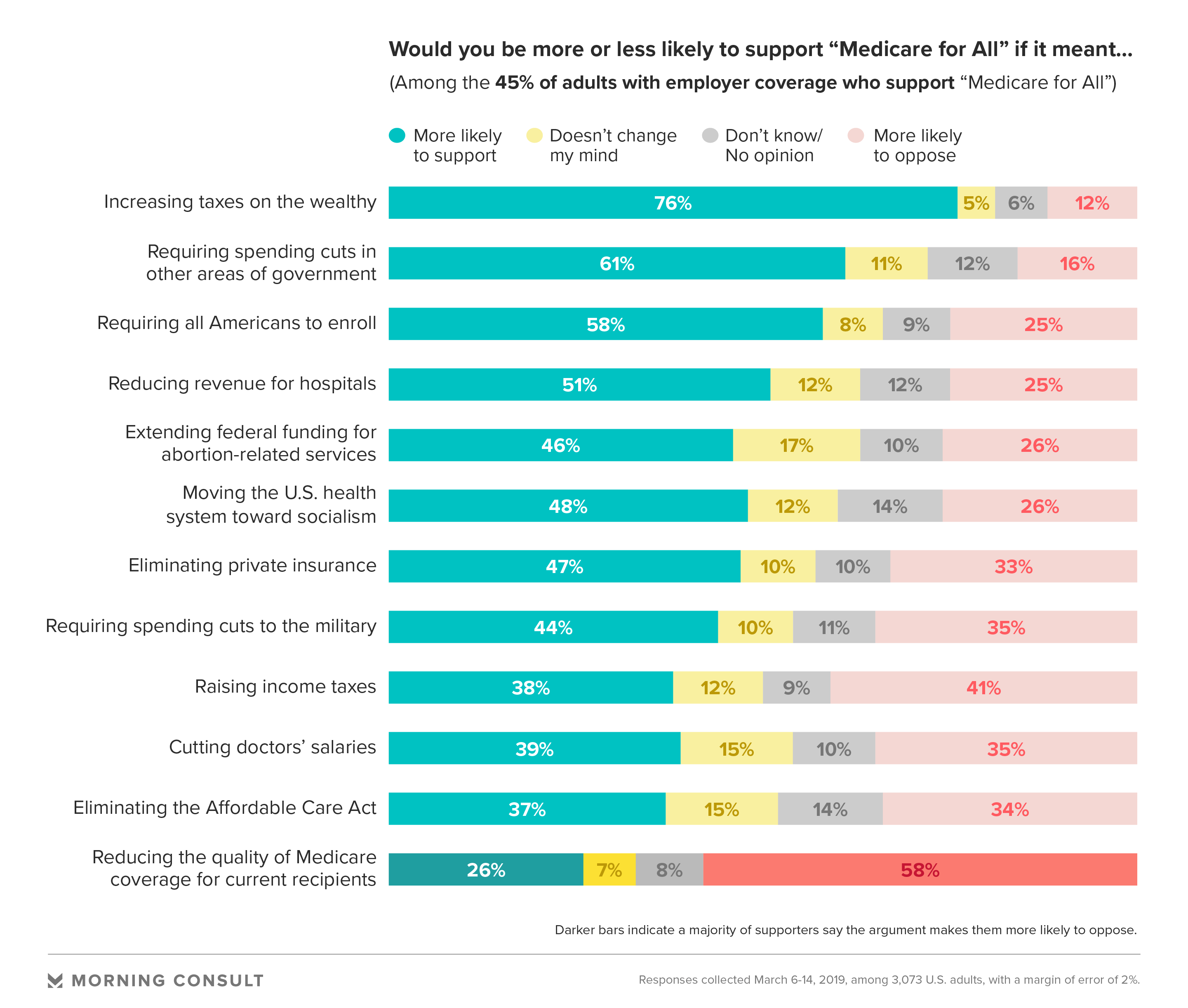 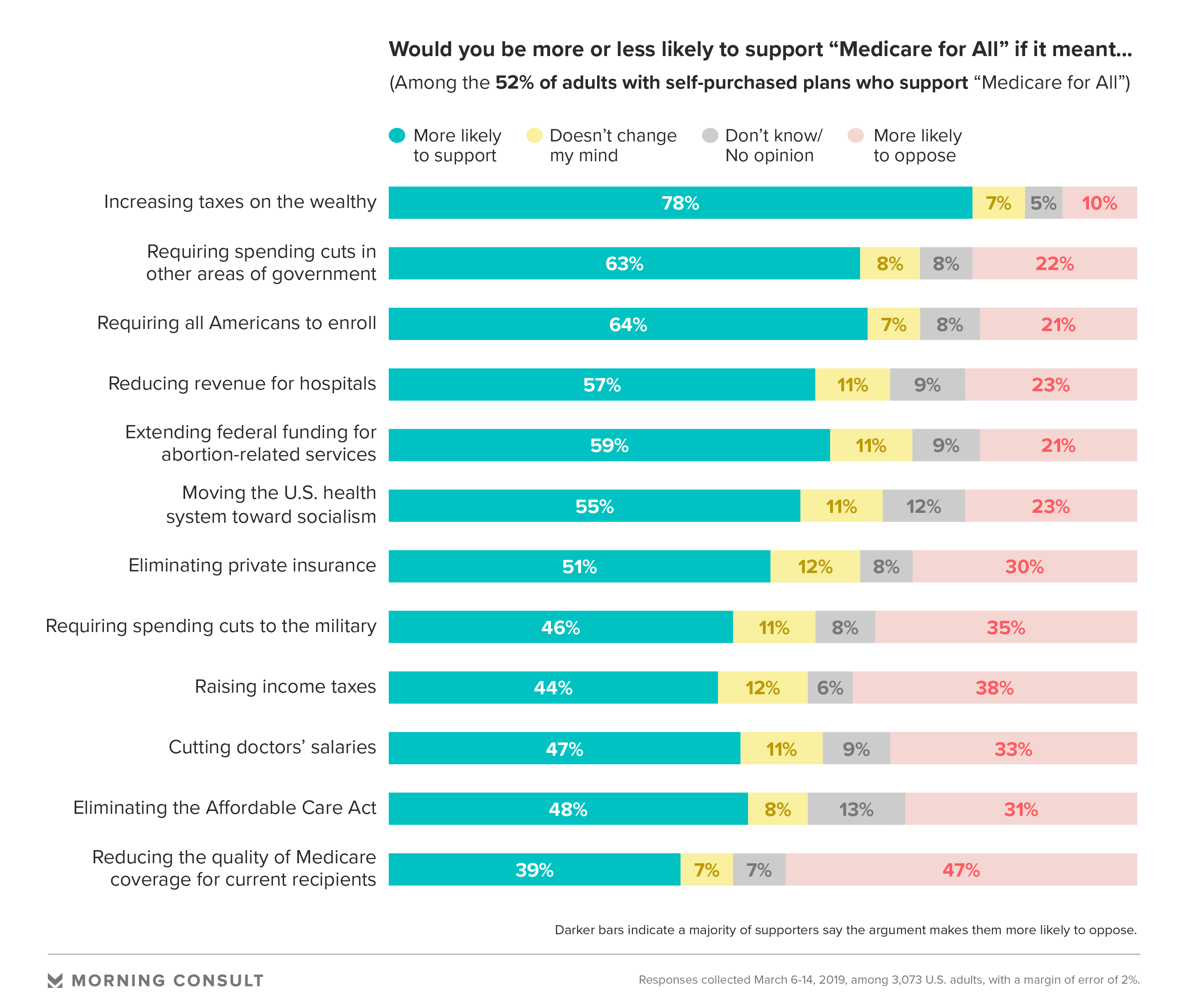 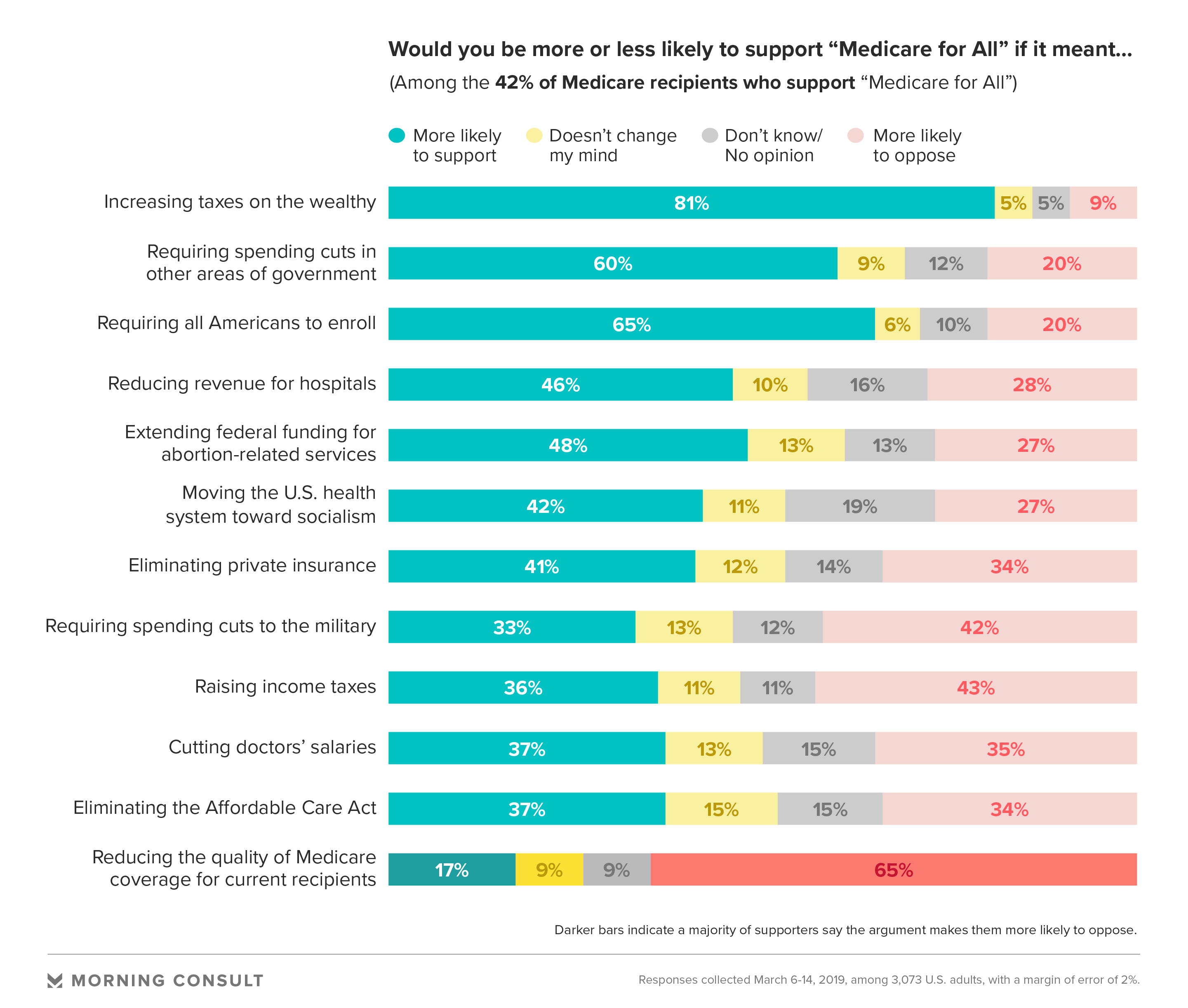 Many conservative arguments against Medicare for All, such as the contention that the system would increase income taxes, do not faze the majority of supporters. Forty-one percent of proponents are not only undeterred by a spike in income taxes, but say it increases their likelihood of support. Another 11 percent say it makes no difference, while 38 percent say it raises their likelihood of opposition.

Upwards of 60 percent of advocates stand by Medicare for All if it requires government spending cuts (71 percent), mandates enrollment (68 percent), eliminates the Affordable Care Act (53 percent) or covers abortion (62 percent).

Health care industry groups have characterized Medicare for All and any plan expanding Medicare as perilous for doctors and hospitals, but their leading lines of attacks — that the plan would reduce providers’ revenue and slash physician salaries — land softly, moving a third or fewer supporters to think twice.

Scott Jennings, a former political appointee of President George W. Bush and a founding partner of RunSwitch Public Relations, said Republicans and Democrats alike miss “being straight with people about what drives costs.” Given that a small slice of the population is responsible for the lion’s share of health care costs, “the true question is whether we should have a system that takes care of those folks while leaving the private market intact and affordable for the vast majority of the American people who spend very little,” he said.

Advocates of universal coverage are now tasked with marrying the ideological spirit of Medicare for All with the choice and practicality that Americans, including most Democrats, are unwilling to sacrifice.

Adversaries on Capitol Hill and within the industry have homed in on the elimination of job-based insurance to weaken support for Medicare for All, and the question about the role of the private market has inflamed a simmering rift between establishment Democrats and a progressive coalition challenging how much power insurers and corporations exert over the health system.

Consequently, some candidates are billing a public option as a short-term compromise. For example, Pete Buttigieg, the mayor of South Bend, Ind., said in an April 15 interview with MSNBC’s Rachel Maddow that he supports moving toward Medicare for All by first making it available on the exchange for people to opt into.

Among Medicare for All supporters, 74 percent approve of an approach that does not eliminate the private market but allows more people to enroll in Medicare or Medicaid, as a compromise in the short-term on the path to universal coverage. Striking down the private market turns off about a third of supporters.

Charles Gaba, a progressive health care analyst who runs ACAsignups.net, cautioned against writing off more politically palatable iterations of Medicare for All as “incremental.” Even the Affordable Care Act, which few would consider a “baby step,” was intended as a step on the pathway to universal coverage, he said.

Jesse Ferguson, a Democratic strategist, questioned whether Medicare for All necessarily eliminates employer-sponsored coverage. Though the party has unfinished work in defining the terms of its internal health care debate, Ferguson said, disagreement on the best path forward does not undermine the fact that Democrats’ commitment is to guaranteeing health care for all, not striking down the private market.

The survey finds people are split between whether Medicare for All exclusively refers to the policy championed by congressional progressives, which eliminates duplicative private insurance, or broadly encapsulates the fight for universal coverage. In the latter case, the Sanders bill, which explicitly replaces private insurance, is just one of several approaches.

Less than a third of adults describe Medicare for All as laid out in Sanders’ plan, while 32 percent say it offers everyone insurance through the government or the private market. A 39 percent plurality of those who back Medicare for All believe the plan leaves employer-sponsored plans on the table.

Warren said by email that “there are multiple proposals on the table right now that would layer coverage expansions that add up over time, but the aim has to be very clear: Make sure every single person in this country has health care coverage.” The other presidential candidates signed onto Sanders’ legislation did not respond to requests for comment.