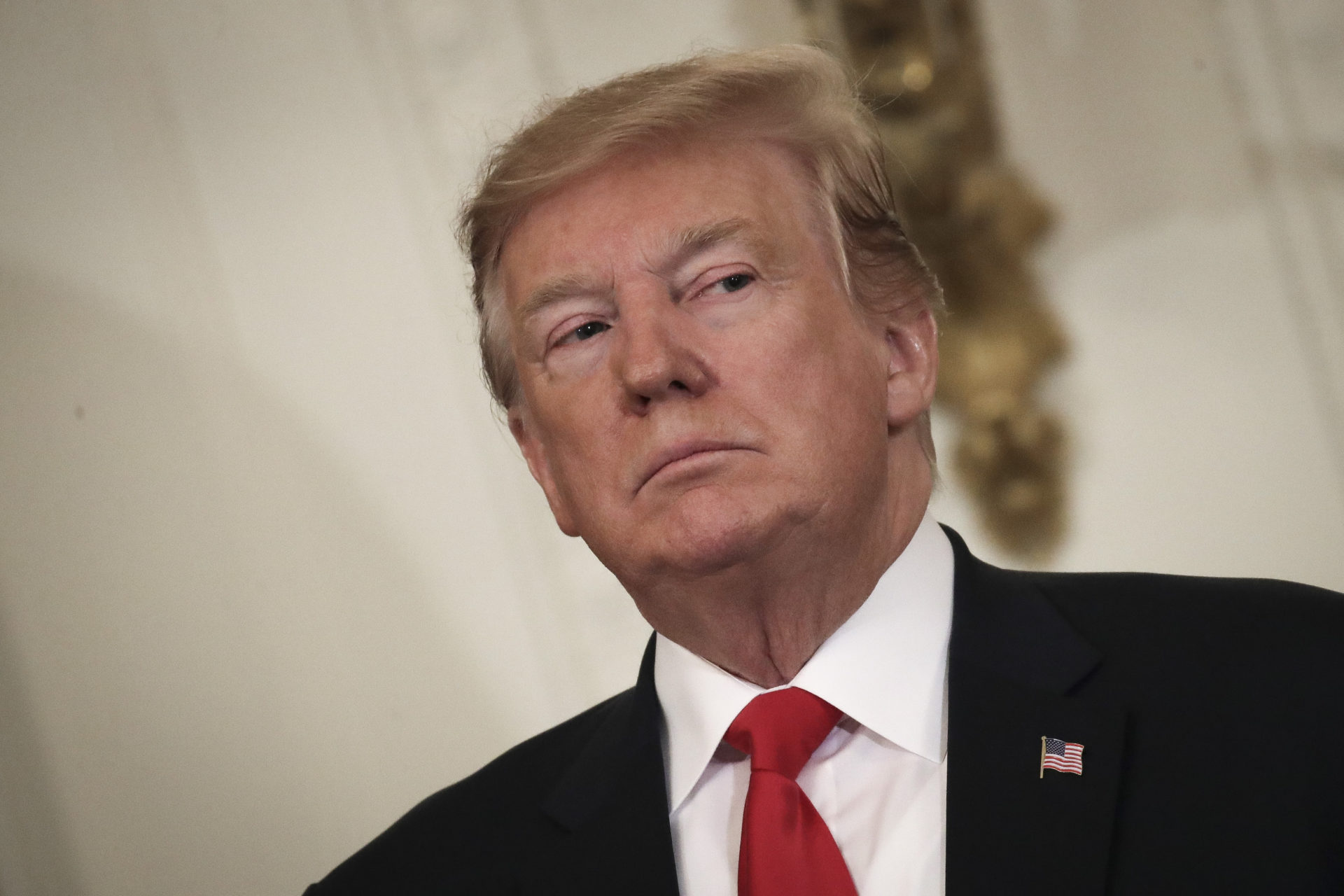 President Donald Trump’s net approval rating reached the lowest point of his presidency following the release of a redacted version of special counsel Robert Mueller’s report on Russian meddling in the 2016 election and obstruction of justice.

Fifty-seven percent of registered voters disapproved of Trump’s job performance and 39 percent approved in the latest Morning Consult/Politico weekly tracking poll, which surveyed 1,992 registered voters April 19-21 and has a margin of error of 2 percentage points. The 18-point deficit marks Trump’s worst net approval rating — the share of voters who approve minus those who disapprove — since he took office. It surpasses the three 17-point gaps the president previously incurred, two of which came amid the longest government shutdown in U.S. history and another that followed his controversial comments regarding the August 2017 clash between protesters at a white supremacist march in Charlottesville, Va., that resulted in the death of 32-year-old counterprotestor Heather Heyer.

On Capitol Hill and the 2020 presidential campaign trail, the release of Mueller’s report — with striking details about the president’s attempts to stop or undermine the probe — has resurfaced talk of impeaching Trump over alleged obstruction of justice, adding fuel to a debate among Democrats.

Sen. Elizabeth Warren (D-Mass.), one of the leading contenders for the Democratic nomination for president, was the first 2020 candidate after the report’s Thursday release to say the House should begin impeachment proceedings, followed by former Housing and Urban Development Secretary Julián Castro.

House Speaker Nancy Pelosi is taking a more cautious approach: In a Monday letter to her caucus, the California Democrat noted that “the facts regarding holding the President accountable can be gained outside of impeachment hearings.”

Some Democrats believe that impeaching the president would be an unpopular move that could hurt the party’s chances at the ballot next year, and the latest survey provides some evidence for that viewpoint. 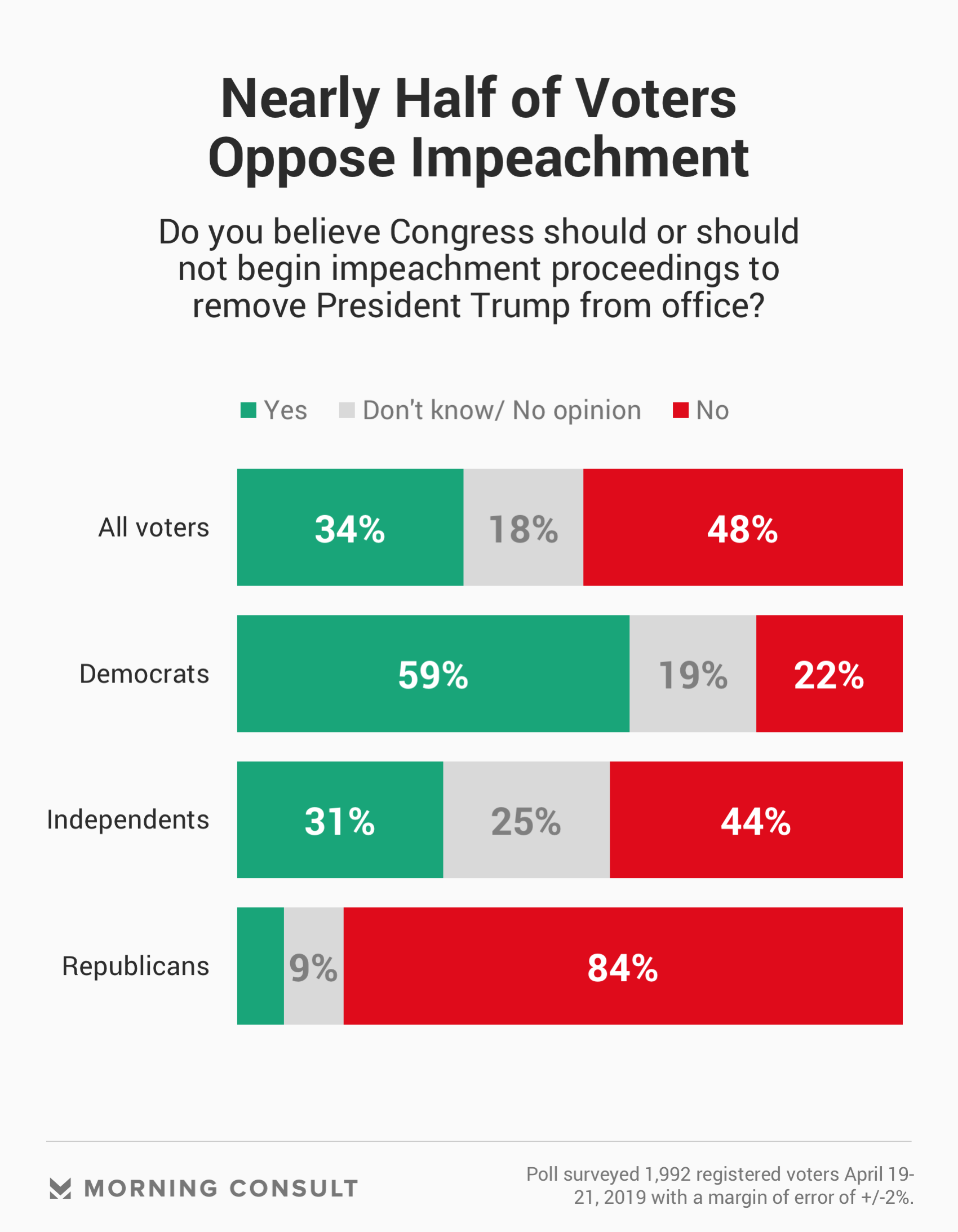 Just over a third of voters (34 percent) said they support impeaching Trump, compared with 48 percent who oppose it, similar to the share of voters who said the same in a poll conducted immediately after the midterm elections. The 5-point drop in support for impeachment since January was driven largely by Democrats, who soured on impeachment by 12 points, from 71 percent to 59 percent.

Trump’s defenders have taken a victory lap on Mueller’s findings. Rudy Giuliani, a top lawyer for the president, echoed Trump’s proclamation of “no collusion, no obstruction” during an interview on “Fox News Sunday.”

While both Trump’s allies and rivals have claimed victories from the Mueller probe, Morning Consult/Politico polling continues to find that both major events concerning the probe’s end — Attorney General William Barr’s summary of Mueller’s conclusions and the release of the actual report last week — have done little to alter public opinion on the president’s actions, his campaign and Russia.

Forty-seven of registered voters in the survey said they believe Trump tried to impede or obstruct the investigation and 41 percent said they believed members of the Trump campaign conspired with Russia to influence the 2016 election, compared with 44 percent and 39 percent, respectively, who said the same in February.

The share of voters (51 percent) who said they believe it’s likely Russia has compromising information on the president was unchanged from the February survey.