Though Twitter Is Free, Some Users Say They’d Be Willing to Pay

27% of 18- to 29-year-olds said they'd pay to use Twitter, but experts contend consumers won’t pull out their wallet just yet

Twitter Inc.’s first-quarter earnings report on Tuesday will be the last time that the company will report monthly active users, choosing instead to emphasize what it calls monetizable daily active users, which it says is a more accurate business metric.

As the social media platform seeks to grow its 134 million monetizable daily active users, Morning Consult polling suggests that Twitter could find some success in further monetizing its audience, at least its younger one, in a way it hasn’t mentioned in recent quarters, which is through a paid subscription.

A Morning Consult poll of 2,200 U.S. adults found that among the 733 Twitter users in survey, those ages 18-29 and 30-44 were most likely to be open to the idea of a Twitter subscription, with 27 percent of each age group saying they would “definitely” or “maybe” pay for the social media service. 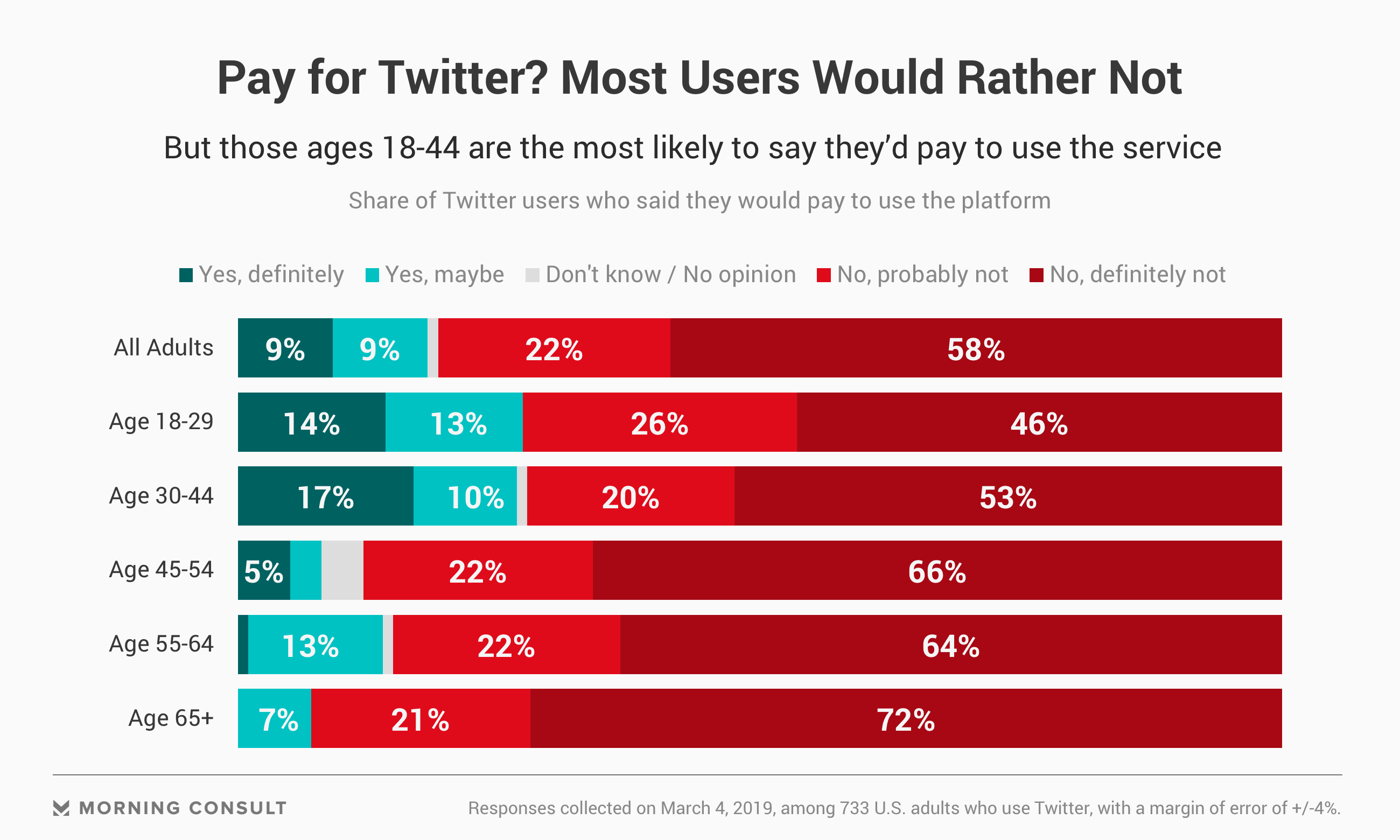 The poll also shows that 18- to 29-year-old people who use Facebook, Twitter, Snap and Instagram value Twitter the most, with 15 percent saying they’d give up the platform if they had to choose among the four, while 34 percent of them were willing to give up Facebook, 23 percent chose Snap and 20 percent picked Instagram.

By comparison, 23 percent of social media users ages 30-44 would give up Twitter, according to the poll, which was conducted March 4.

“In some ways Twitter is more influential than you would expect given the number of people who are actually on Twitter on a regular basis compared to Facebook or Instagram,” said Makana Chock, an associate communications professor at Syracuse University. 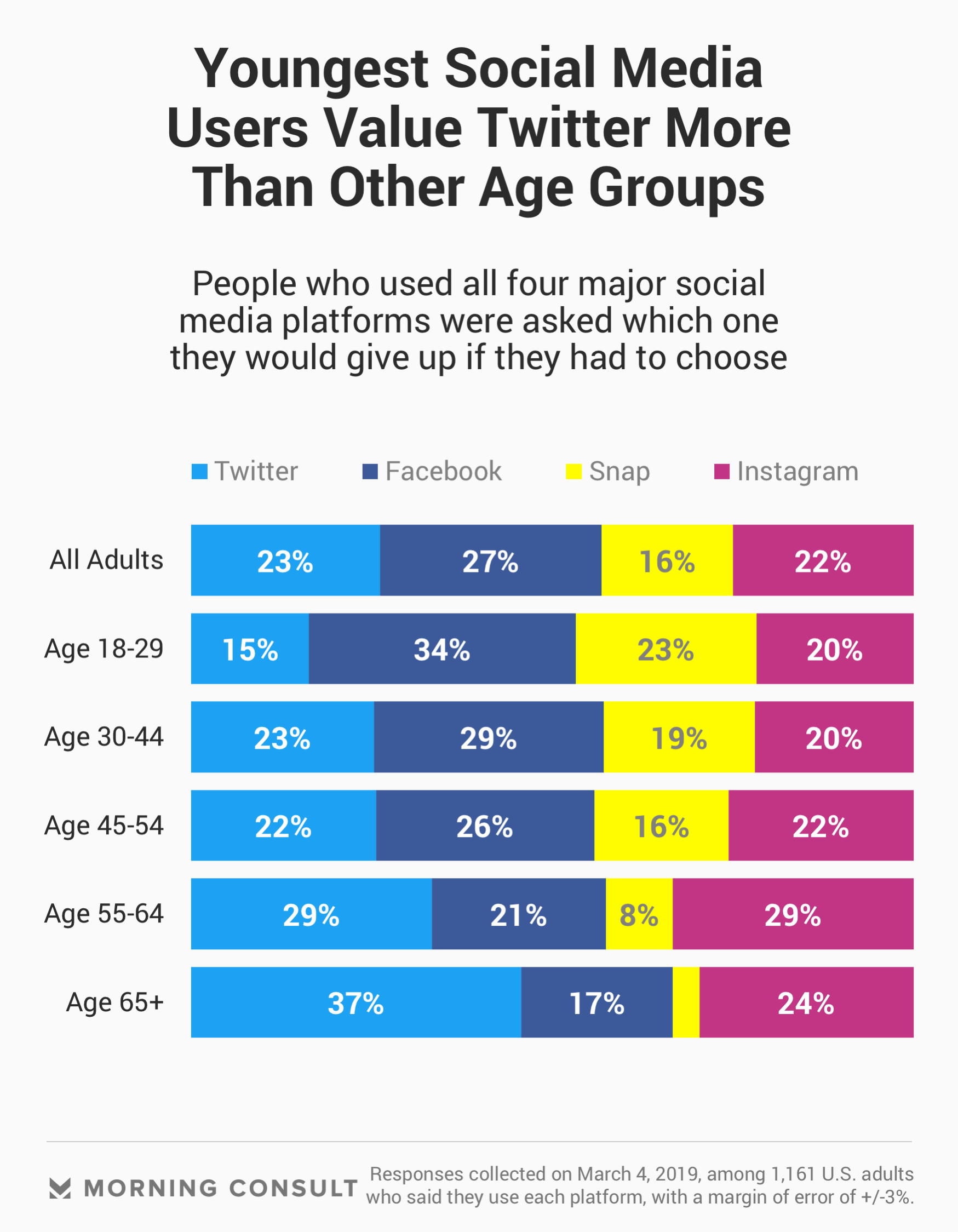 The nature of the platform and its speed has turned it into a vehicle for addressing company crises, disseminating formal PR statements, driving the agenda for the news day and creating conversation around niche sports and entertainment communities like #NBATwitter, she added.

According to an analysis using the Van Westendorp model — which calculates an optimum price point for a good or service by considering what prices consumers believe are “too expensive” and “too good to be true” — $4 was the optimum monthly price for Twitter without any additional elements.

But if the company were to have a paid subscription, it would have some work to do to appeal to consumers.

Liz Gray, head of cultural insights and strategy at Creative Artists Agency Brand Consulting, said young consumers are generally less willing to pay for an existing free offering without any extra benefits. “The business case just isn’t there yet” for Twitter, she said.

Gray described the 18- to 29-year-old demographic as “pragmatic” and one that already considers paying for the likes of Spotify, Netflix and Hulu in a competitive social landscape. She argued that Twitter, as an easy-to-read platform, still has its challenges like anonymous accounts tweeting hate-filled posts and questions about bias in chronicling news events.

Of those young adults willing to pay, Chock said she guessed that their Twitter use to be work-related. The poll shows that 14 percent of all 18- to 29-year-old users of Twitter said they used it mostly for work, the highest rate compared to Instagram, Facebook and Snap.

Still, 88 percent of all adults answered that their Twitter use is mostly for fun, and majorities of all age groups said they were not likely to pay for Twitter. “People have an expectation that this information is free,” Chock said.

Chock, like Gray, said people were not likely to pay for Twitter for the service they currently receive, so a paid subscription would have to be sold on the expectation that “if you pay more, you get more.”