White Evangelicals’ Support for Trump Has a Soft Underbelly

Nearly half of the conservative Christian group would prefer anyone but Trump in 2020, or refused to answer 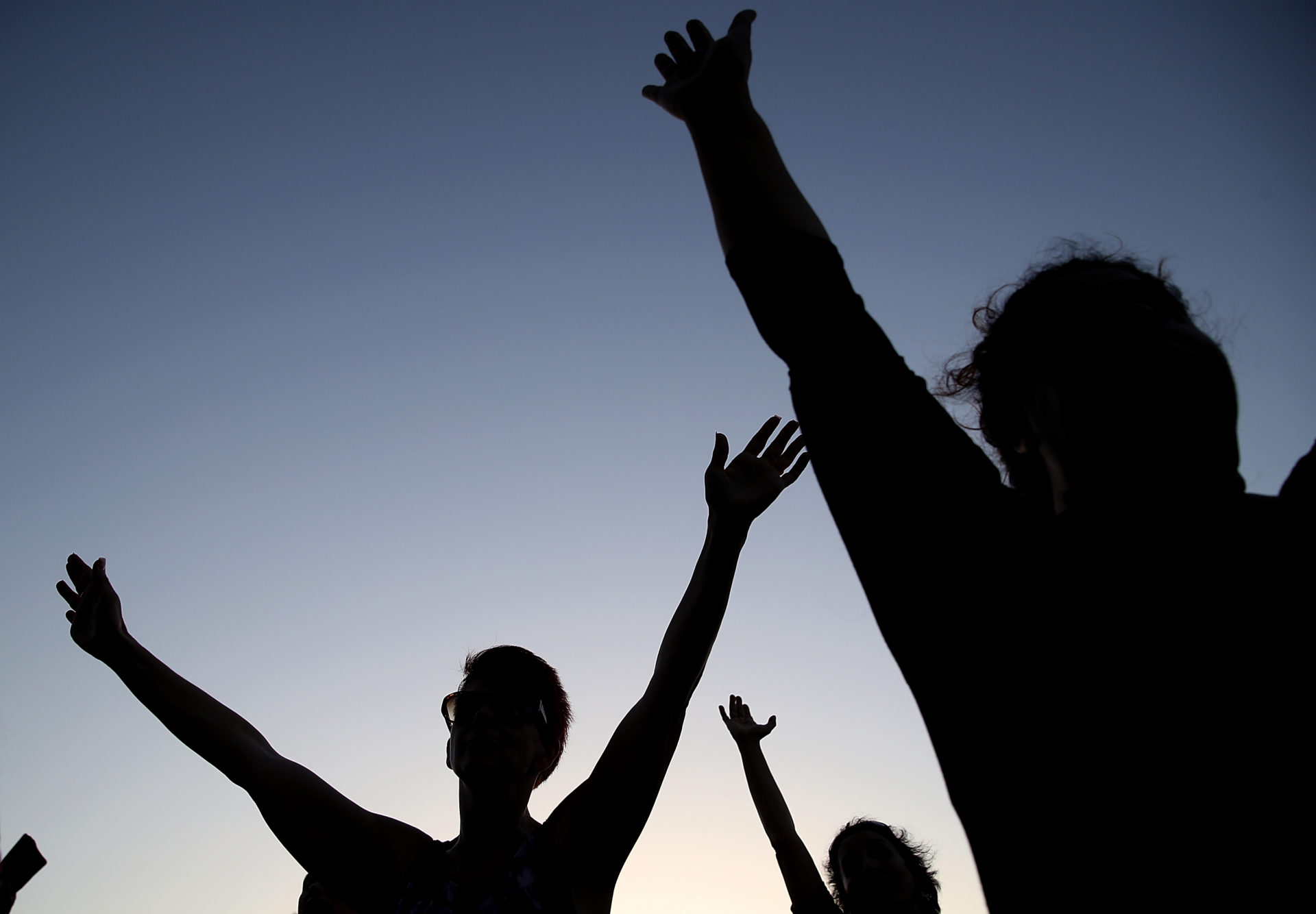 White evangelical Protestants played a key role in handing Donald Trump the presidency in 2016, voting for him at a rate that eclipsed previous Republican standard-bearers despite the perceived moral failings that would seemingly repel self-described “values voters.”

And while data has shown the key voting bloc continuing its alliance with the president during his two-plus years in office, a new Morning Consult poll and analysis suggest support may not be as solid as it initially appears.

Fifty-five percent of white evangelical Protestants said they preferred to see Trump as the GOP’s nominee in the 2020 presidential election when given other options, such as Vice President Mike Pence or any other Republican figures.

That’s 16 percentage points less than the share of self-identified Republicans who said the same, and a large drop from the 80 percent of white evangelicals who voted for Trump over Democrat Hillary Clinton in November 2016. 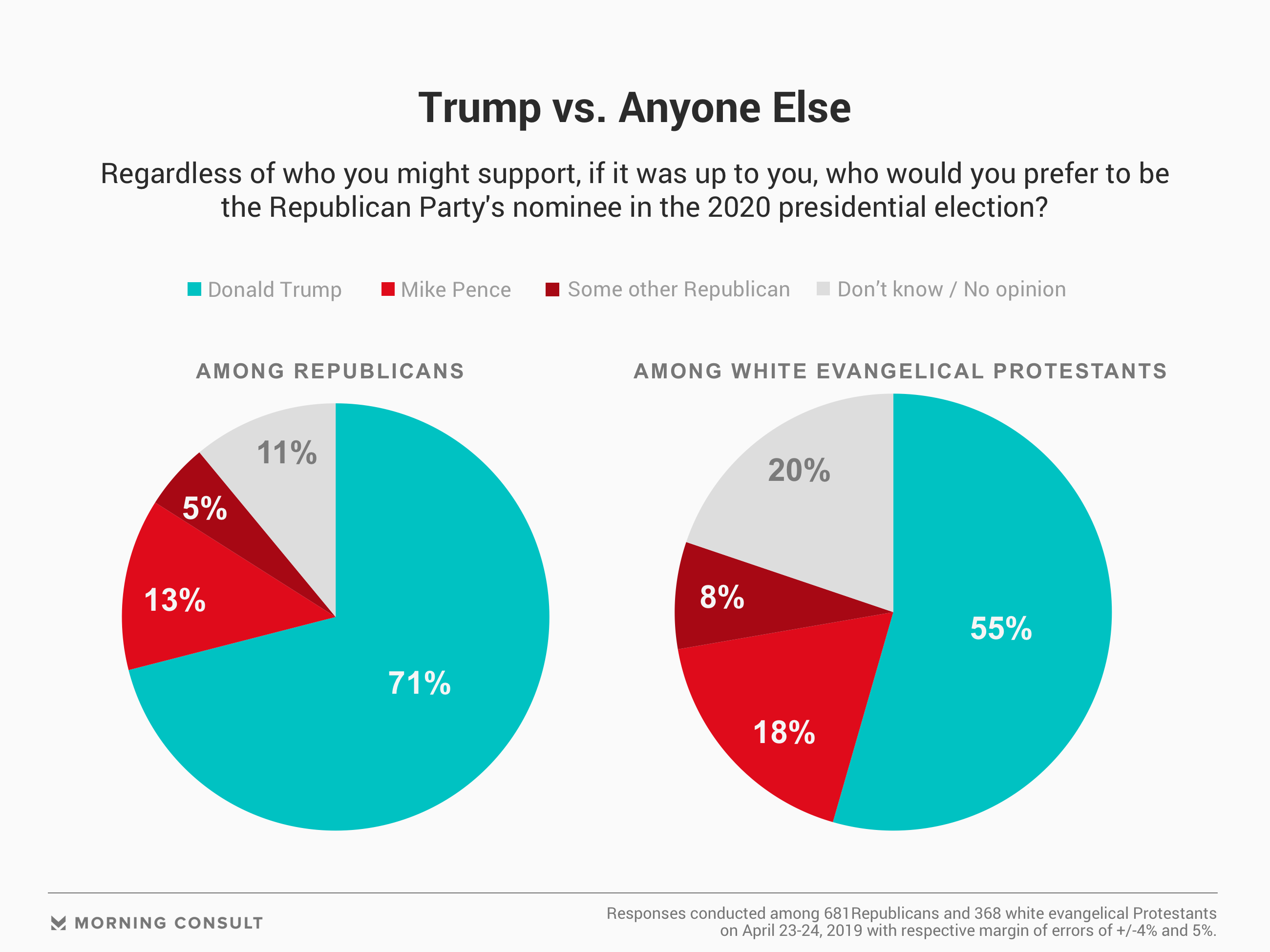 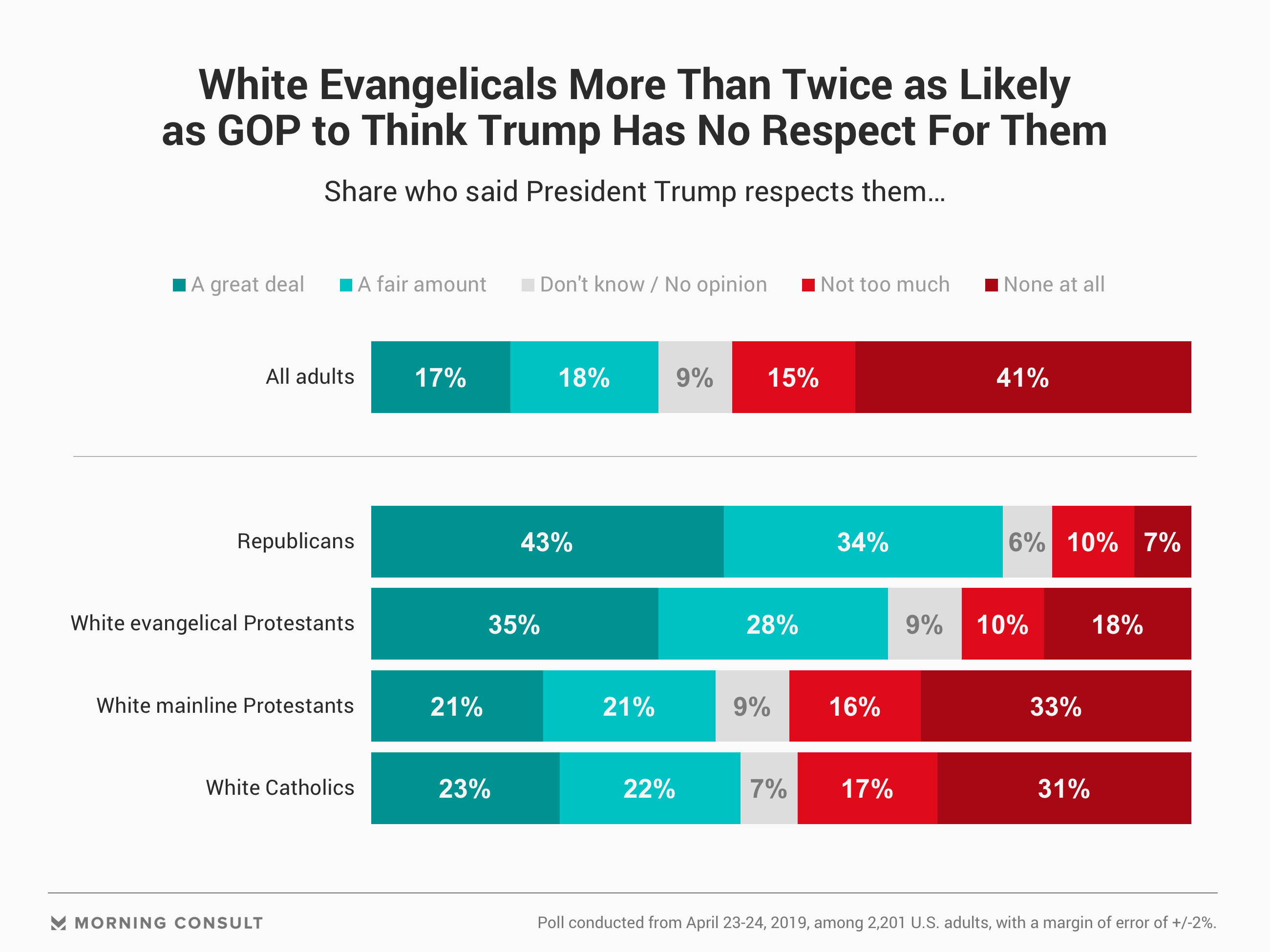 Those figures come despite Trump’s securing of a bigger share of the vote with the conservative Christian group in 2016 than Mitt Romney, John McCain or George W. Bush did in the previous three presidential elections. White evangelicals’ favorability of the president sits at 70 percent, 14 points lower than Republicans.

The disparity in preference doesn’t appear to be based on policy. Views between Republicans and white evangelical Protestants on which issues the president and Congress should make a top priority are nearly identical, with each group naming immigration and health care as their top two policy issues. 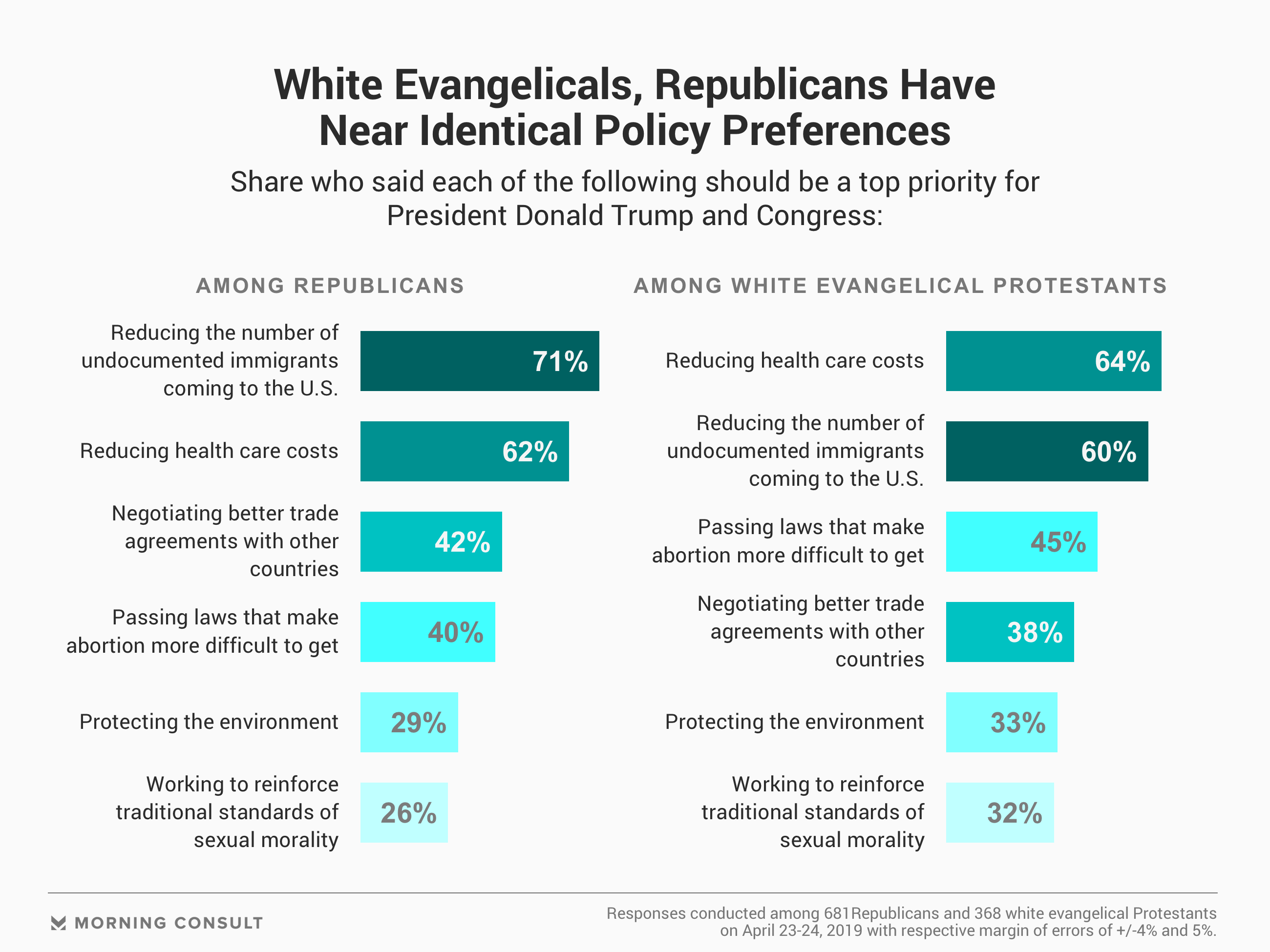 That agreement suggests that regardless of any personal distaste for aspects of Trump’s behavior or history, a strong majority of white evangelical Protestants will once again vote for him if he is at the top of the ticket.

Supporting this notion is the group’s pessimism toward its share of socio-political capital: They were the most likely of any group surveyed to say they’d have less influence on social and political matters in the next 10 years. 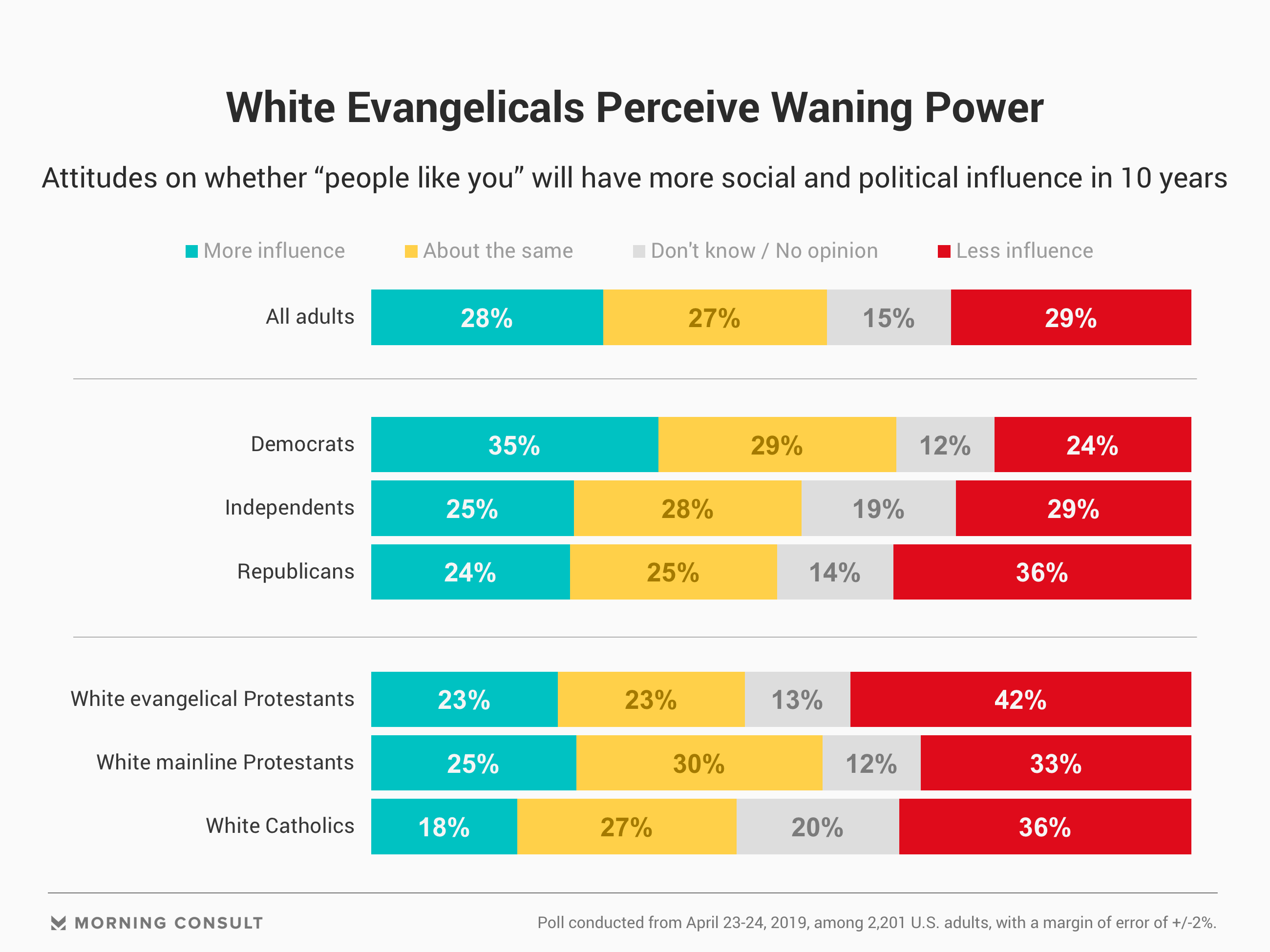 While white evangelical Protestants make up 15.3 percent of the population, white “born again” Christians comprise 26 percent of the 2016 electorate, per PRRI and exit polls.

The group is also more likely than any subgroup polled to say that evangelical Christians face “a lot” of discrimination: Forty-one percent said they do, versus 30 percent of all Christians. A February 2017 poll from PRRI shows that Republicans, of which 35 percent are white evangelical Protestant, are more likely to say Christians face a lot of discrimination than they are to say blacks, immigrants and Muslims do.

And as some Christian groups such as the United Methodist Church grapple with whether to alter policies concerning members of the LGBT community, two-thirds of white evangelical Protestants said their church or denomination should preserve its traditional beliefs and practices, a view that was shared by less than half (42 percent) of white mainline Protestants.